Another Windows Phone 8.1 handset just got announced this morning by Microsoft, the Nokia Lumia 530, coming in under the existing Lumia 630 (reviewed here). The 530 (available in single and dual SIM form) drops down specifications slightly, with 4" screen, Snapdragon 200, and 4GB of internal storage, but also comes in at an initial estimated High Street price of under 100 Euros, so I'm guessing about £60 on pay as you go.

Nokia's tagline for the Lumia 530 is:

The most affordable Lumia yet welcomes even more people to Windows Phone 8.1.

The Lumia 530 is powered by a 1.2GHz quad-core Qualcomm Snapdragon processor, and comes with a 4-inch LCD display with 'soft' control buttons, much like the larger 630: 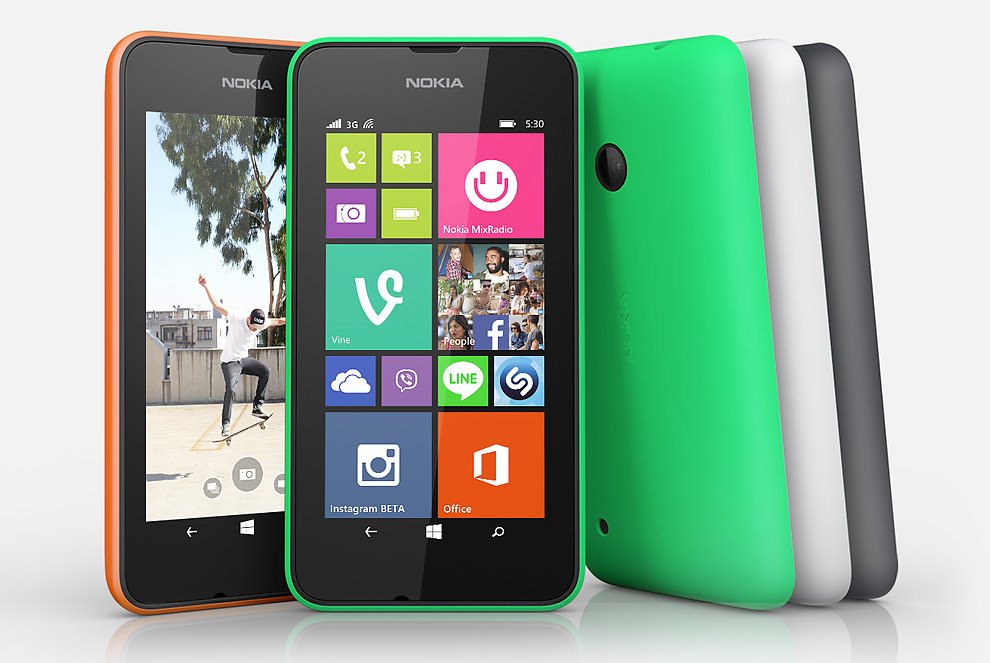 Although internal space is limited to 4GB (of which only half will be available to a user), the target market here won't be wanting to install huge applications, and there's a microSD slot to cope with sideloaded or downloaded media, and installed games. Captured media won't be a factor, since there's just a 5MP fixed focus camera and video capture is just WVGA.

The Lumia 530 comes in both single SIM 3G and Dual SIM 3G versions, in bright orange, bright green, white, dark grey. The shells are changeable, as you'd expect, and you can replace the battery, something that's very important in the target market and developing world.

As showcased in the video below, there's emphasis by Nokia/Microsoft on the built-in social functions (Facebook, Instagram, Vine, Skype, etc. all built-in), the full Office editing capability (in developing markets this might actually be useful in a situation where an affordable phone is also someone's only computer?), the 15GB OneDrive online storage for free and the way both MixRadio music and HERE Maps/Drive will work offline, if needed (again important in developing markets where connectivity isn't a given).

As with the 630, disappointingly, there's no front-facing-camera (FFC), something which is increasingly popular on other platforms for handling 'selfie' and video calling/messaging duties (e.g. over Skype). It's also expected that there will be no way to swipe away the virtual controls in order to use the whole of the 4" screen in most applications, though this could easily change in a firmware update.

The Lumia 530 Single SIM and Lumia 530 Dual SIM are expected to be priced at €85 before taxes and subsidies and on the highstreet for under €100. The Lumia 530 will be available globally, with rollout beginning in select markets in August 2014.

PS. The appearance of the Lumia 530 at this price point would have meant the death knell for Nokia's other 'X' platform, if it hadn't already been killed, of course.

As usual, there's an official hands-on video to introduce the handset: