Hold on... News? NEWS? It's not really, and I'm in severe danger of abusing my position at AAWP just to rant at Microsoft. But in this case they deserve it. One of the central first party applications is broken and I've run out of other ways to bring this to the world's attention. [Update: we now have a workaround!]

Hence this news spot. Someone on the Maps team at Microsoft, what the ******* is going on? [insert the expletive of your choice/culture]

Here's the problem. Windows 10 Maps has a decent stab at including live traffic information, with coloured coded lines on the maps once you've toggled traffic on using the appropriate control. OK, it's only using data from official sources and not crowd-sourcing data as Google also does, but it's still very useful.

So you're looking at a map with live traffic data and all is well. Except that not everything is joined up. Say you (shock horror) want to actually drive somewhere. You set up the destination and 'Get directions' and... the route calculated has the line 'Traffic info isn't available' beneath it, indicating that traffic hasn't been taken into account. At all.

How can traffic not be available when it's clearly shown about two inches above on the phone screen??!?

Here's some evidence and and an example, just to prove that I'm not making this up: 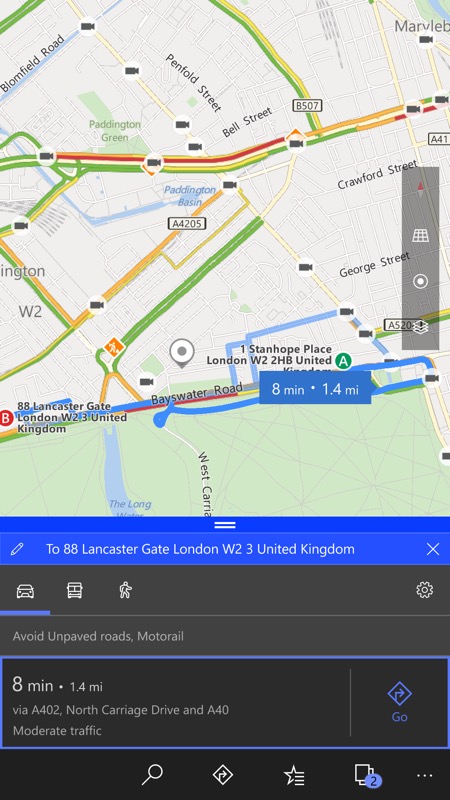 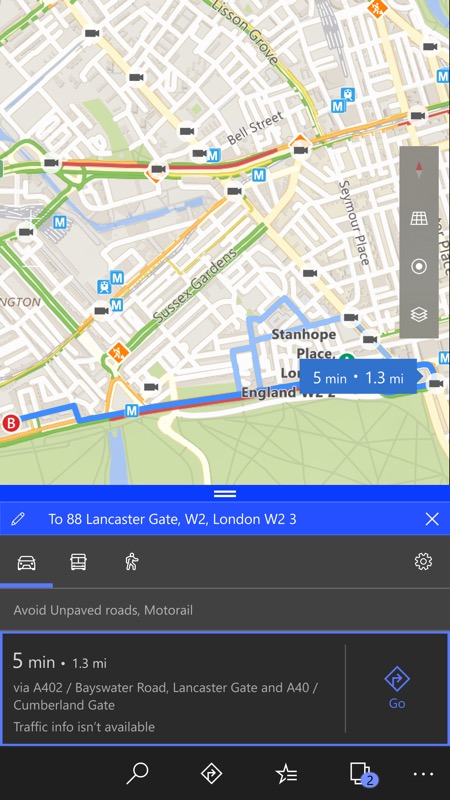 On the left, Maps running under Windows 10 Mobile Anniversary Update, note the realistic time to my London destination - don't worry too much about the routing, I'm just trying to demonstrate traffic awareness. On the right, the exact same route under Creators Update and a much shorter driving time because traffic information is completely ignored. And see that 'isn't available' message at the bottom. Harumph. 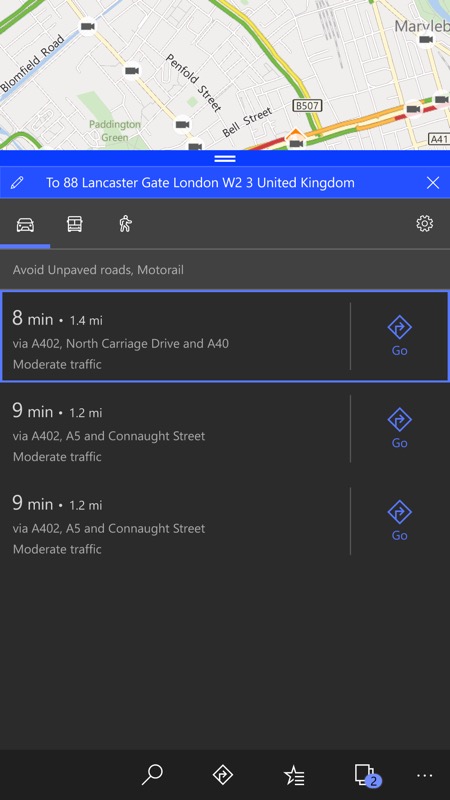 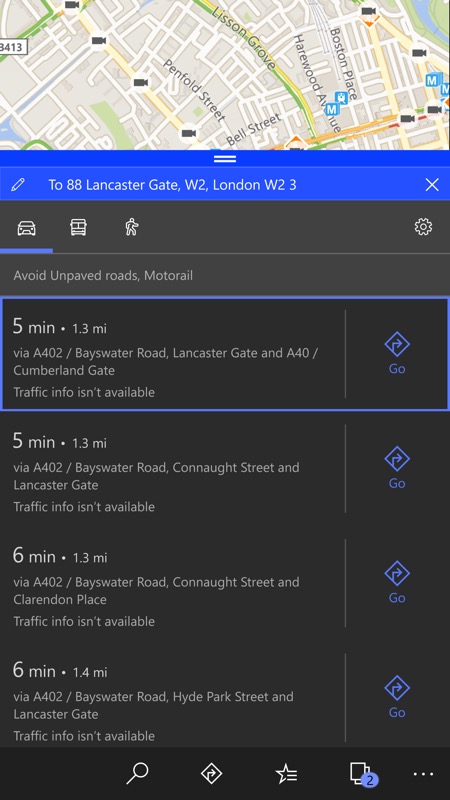 Swipe up to see the various alternative routes and all three under AU show realistic ('Moderate') traffic. On the right, the routes under CU all ignore traffic again. And, as a result, are all 50% too optimistic in this example. 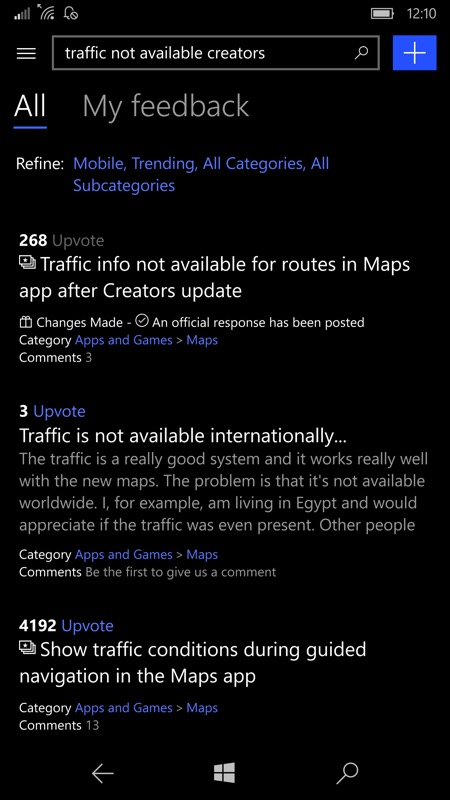 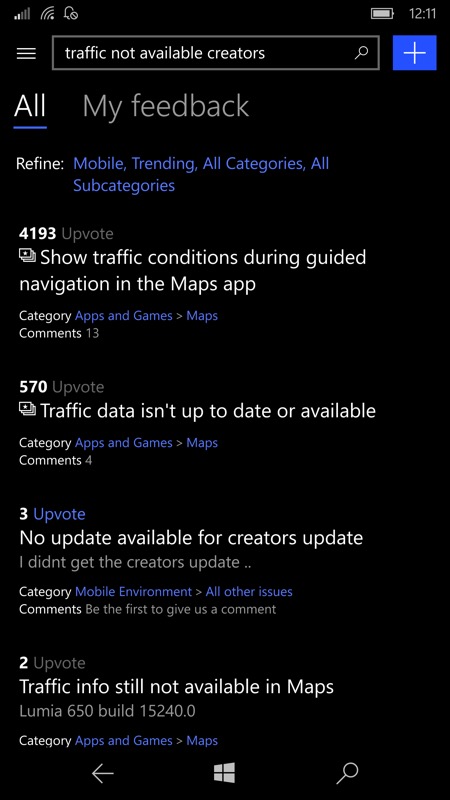 And it's not just me - just some samples from the Feedback Hub saying the same thing.

All of this broke when Windows 10 Mobile moved to the Creators Update, which was months ago - and still no one at Microsoft has fixed the appropriate API call to join the dots and get routing working again. Car navigation is a core part of smartphone use for me, I use it almost every day, so to have this part of the OS broken is immensely frustrating.

How about you? Care to add your vote to any of the dozens of Feedback Hub items on this topic?

How long can Microsoft continue to ignore Maps? Do they care? Does anyone at Microsoft actually use Windows 10 (Mobile) out in their cars?

Update: We have a workaround. From the comments below and from a Microsoft response in the Feedback Hub, it seems that the bug is triggered under Creators Update by having avoidance turned on for 'unpaved roads' and 'motorail'! Go figure. Just bizarre.

Anyway, if you tap on the gearwheel icon besides a planned route and uncheck these options - and then on 'Save these settings' to make sure that they 'stick' then all is well. Traffic information is then used correctly: 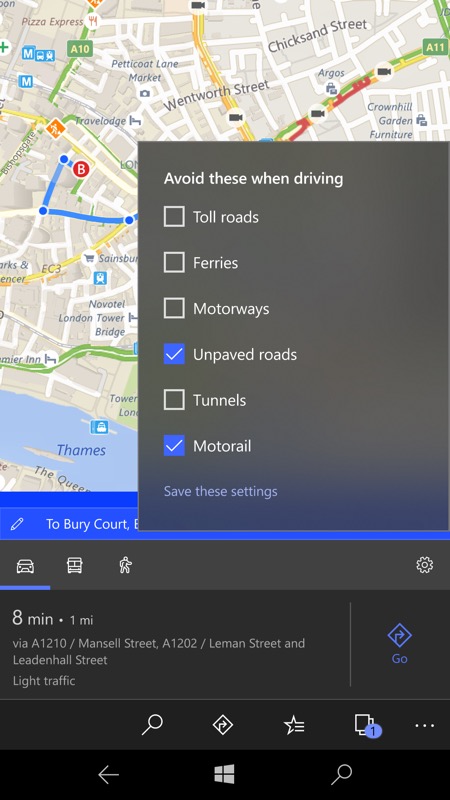 One of the strangest Windows Phone or Windows 10 Mobile bugs and workarounds that I've encountered, but at least now you know and, if things weren't working in your country, you now know the fix!

As per the comments below, this will be fixed properly by Microsoft in a future OS branch, but probably only for the desktop, there's no guarantee that the branch will ever make it to Mobile. Making this workaround all the more vital to note!