RIP, Insiders? Updates to Windows 10 Mobile from now on will be monthly

As widely reported around the web today, one of the Microsoft Insiders programme team has confirmed what many people suspected would happen as we got close to the formal release of 'Redstone 4' (for which there is no mobile equivalent under any name) - no more development Insiders builds are planned for Mobile. Here's what this means...

You'll recall that when Redstone 3 ("Fall Creators Update") was formally released in Autumn 2017, Windows 10 Mobile didn't get the full feature set. Instead, some of the under-the-hood elements were compiled for Mobile and a new mobile-specific branch was formed, the so-called 'feature2_rs3'. This was enough for phones to get 'Fall Creators Update' in name, mind you. But it was the beginning of the end in terms of the cessation of actual new features. In the OS, at least - we still have an active and updated UWP scene.

The real world odds of the 'feature2_rs3' branch being given enough love and care to be added to, for a 'feature2_rs4' branch were always low (though I was optimistic back in October here, following seeming confirmation from Microsoft), so it's not a total surprise that Brandon LeBlanc at Microsoft has confirmed that Windows 10 Mobile will now in fact max out at 'feature2_rs3' and that from now on the core OS and middleware will only receive security updates and bug fixes:

No mobile builds are coming.

You may recall that I predicted all this back in May 2017 in an editorial, where I broke down Windows 10 and its various components and SKUs, with the resulting chart (drawn 8 months ago): 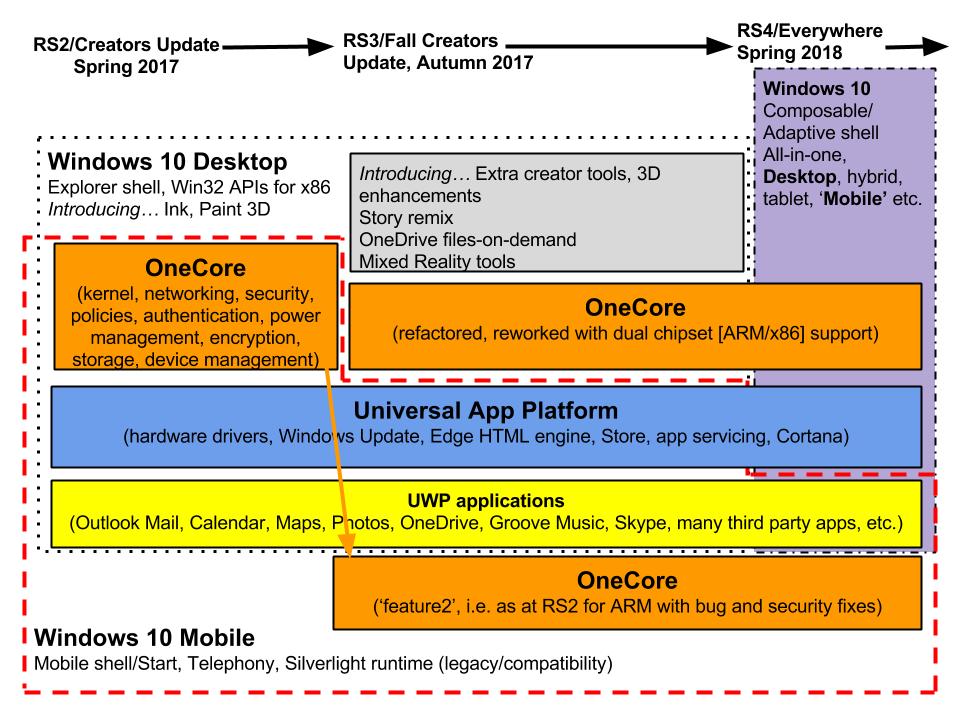 [Looking at this May 2017 chart, although the Mobile side of things was spot-on, the eagle-eyed among you will spot that my panel on RS4 for the Desktop was over-optimistic. We're now expecting the Composable Shell interface side of things to mature for Redstone 5, in Autumn 2018.]

Not much has changed with today's announcement, though. People on Anniversary Update, Creators Update and Fall Creators Update on their Windows 10 Mobile phones can continue to use them, enjoy monthly security updates and bug fixes (all still more than many Android handsets, mutter, mutter), and major updates to the core and third party Windows 10 UWP applications.

What has changed is that there's now little point* in leaving any of your smartphones on Insider builds - they might as well be switched back to production status, ready for the guaranteed monthly updates**.

* The Fast Insiders ring is still used today to try out new updates to core Windows 10 apps (Skype, Outlook, Maps etc.) But you'll get these updates anyway after a few weeks on 'production' status phones and in any case, with the dropping of the significance of the Insiders Programme for Mobile, maybe the staggered rollout of app updates will also get dropped? We just don't know yet.

** The 'Patch Tuesday' monthly updates may just be pushed to all existing rings, of course, so you may not need to leave the Insiders programme at all. I'm going to come back to this in a tutorial feature in the near future.

Filed: Home > News > RIP, Insiders? Updates to Windows 10 Mobile from now on will be monthly