Microsoft adjusts support timescales for Windows 10 branches down to 18 months?

Around six months ago, Microsoft quoted "28 months" as the supported period for each Windows 10 branch, but this figure seems to have been somewhat nebulous and - recently - truncated, judging from the official web site as it is now. At various points (I have screenshot proof), support has been "42 months", then "28 months", and now "18 months". Which is fair enough for the Desktop, but slightly more critical for Mobile...

Windows 10, famously, was pitched as the last 'Windows' you'll ever need, in that it would be continuously updated, every six months, for ever. Well, until your hardware broke, at least. And this works well on the Desktop, with branches being announced and updated to this day and, hopefully, for years to come.

But for Mobile, development stopped with the Fall Creators Update (branch 1709, and even that was a bit of a fudge, being a tweaked version of 1703), begging the question of 'What's Next?'. And it's here that the timescales get interesting. Around nine months ago, I read on the Microsoft web site of '28 months' support (updates, fixes) for every branch of Windows 10, and I've quoted this stat several times since.

However, web sites are dynamic things and changes can be made in an instant (heck, we sometimes update AAWP pieces to reflect new information), and I now read on Microsoft's official Lifecycle Fact Sheet that the figure is now '18 months', i.e. a 10 month reduction.

Just to prove I haven't been going quietly mad, here's a screengrab from that same page back in the summer of 2017 (thanks to the Internet Archive):

Obviously, this page has been tweaked every month or so for the last two years, with new branch information and so on, but the table above clearly shows that Windows 10 '1703' (Creators Update) was supported, in terms of updates, until October 2020, which actually works out as 42 months. So the '28 months' that was quoted elsewhere (sadly, the Internet Archive has no site crawls from the last quarter of 2017, so I can't show this figure) was actually rather conservative by comparison.

Not that it matters hugely - as companies often say, 'plans change'. I suspect that as Windows 10 evolved, the logistics of keeping so many branches going in parallel started to become prohibitive in terms of resources (see my revised chart below), so the intended 42 months quickly became 28 and then, finally, as shown in the screen grab from the same URL today:

The table's been expanded because of the extra branches and older Windows versions have been relegated to elsewhere on the page, but the support end for branch '1703' is now quoted as October 2018, i.e. 18 months, and this figure is quoted explicitly elsewhere on the page.

Ten months is quite a drop and a bit of a blow to Windows 10 Mobile users, though even with the revised figures, the majority of AAWP readers with phones on Fall Creators Update will still get 'serviced' until Spring 2019, so it's not the end of the world.... yet. And it's still a long enough timescale that devices like Surface Mobile (or whatever Andromeda ends up being called) can arrive and a verdict on where to jump next be delivered.

In short, I don't think it's that Microsoft 'doesn't care', I think that the company is trying to simplify things in terms of concurrent branches, and I don't really blame it - 28 months always seemed too good to hope for (as real). And 42 months was quite clearly unrealistic.

As noted in the comments below, there's also the comment on the linked page:

And that page, with no 'updated' date, has, on it's FAQ: "Starting with Windows 10 Mobile, Microsoft will make updates available for the operating system on your phone, including security updates, for a minimum of 24 months after the lifecycle start date", with 'June 11th 2019' quoted as the end of support for 1703, the Creators Update, for Windows 10 Mobile.

In short, confusion reigns. '28 months' has become '24 months', but more likely 18 months, since I can't see the core Windows components (including Edge) being kept updated beyond what's happening for the equivalent desktop branch. Maybe the 24 months refers more to actual support via forums? Or maybe that includes emergency security patches only? Who knows?

But, yes, 'plans change' - and with that I present a revised/tweaked version of my support chart for Windows 10 Mobile, based on the more likely 18 months timescale for security fixes and OS/browser patches/tweaks: 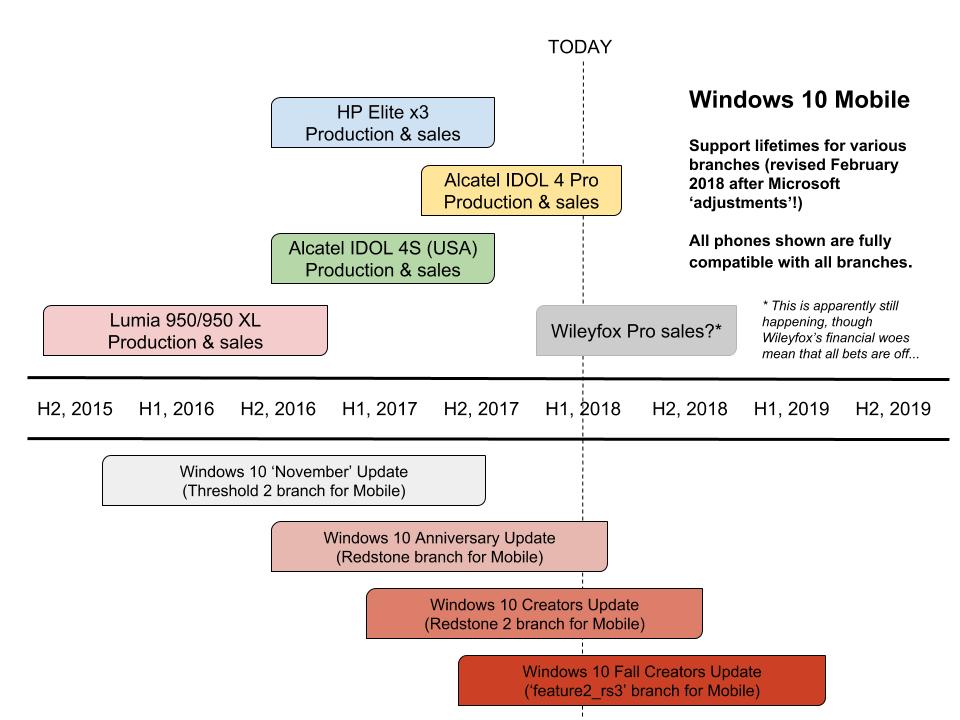 The support bars, then, aren't as long as they were, but we're still well within 'fully supported' territory and in fact not even halfway through the lifetime of Fall Creators Update for Windows 10 Mobile and with 14 months still to go before security updates and OS/browser fixes stop arriving.

The optimist in me is tempted to say that, even then, in April 2019, Windows 10 Mobile isn't 'dead', in that phones will carry on working. And with the platform being niche, there's no large target for malware authors or attackers to go after. Plus applications will still get updates in the Store (at least, as long as developers don't raise the 'branch baseline' too much in the intervening year).

But the realist in me is tempted to say that without OS/browser updates/fixes then some kind of line would have to then be drawn in the sand - after Spring 2019, Windows Phone and Windows 10 Mobile would truly be classed as a 'legacy' platform and not a 'current' one.