Twitter's push to take more and more control of its own service culminated a few weeks ago with the unwelcome closure of several APIs, partly reported on here. The changes have yet to be fully addressed by third party clients, but the news isn't good. Tweetium is the first client to respond, with an update that references the changes, but which also explicitly gets rid of push notifications, even for Direct Messages. Given that the official Twitter client on Windows 10 Mobile is a PWA which also can't deliver notifications, AAWP readers are somewhat screwed by Twitter here.

This update addresses Twitter's shut down of the Streaming API used by the app and the Pro subscription services.

In fairness, if Tweetium is your app of choice to while away time sitting on the toilet waiting in a queue, then it'll still work fine. Auto-polling of Twitter's APIs every minute mean that tweets are more or less real time and there's always something happening, plus you can manually refresh whenever you like. But then you can do much the same with the free official client, which is updated server-side with new Twitter features, making the use case for Tweetium a lot less strong.

It's a crying shame, and for once the issue isn't with Windows 10 Mobile, it's a third party change. Twitter has every right to do what it likes with its own platform/service, of course, but the API changes won't endear it as a communications system for existing Windows 10 Mobile users. 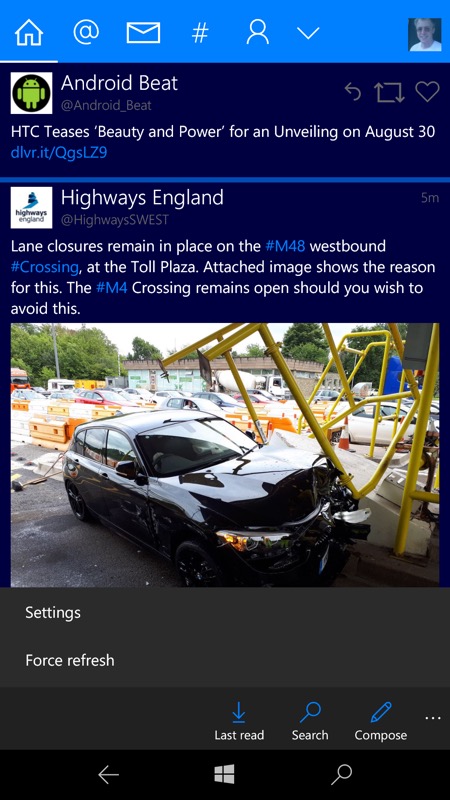 Tweetium in action - still fast and fluid and with auto-refresh of content - but no real time notifications of any kind. 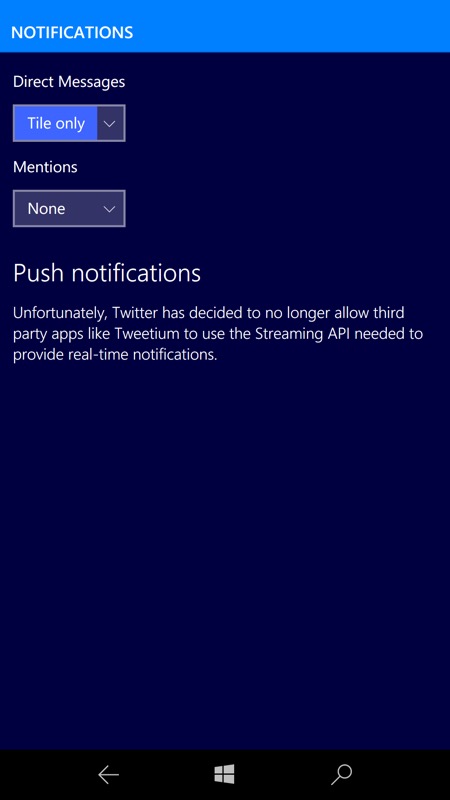 Tweetium's developers explain the issue here in Settings. I tried setting the top box to 'Tile only', hoping that the live tile would trigger on a DM, but this didn't work. 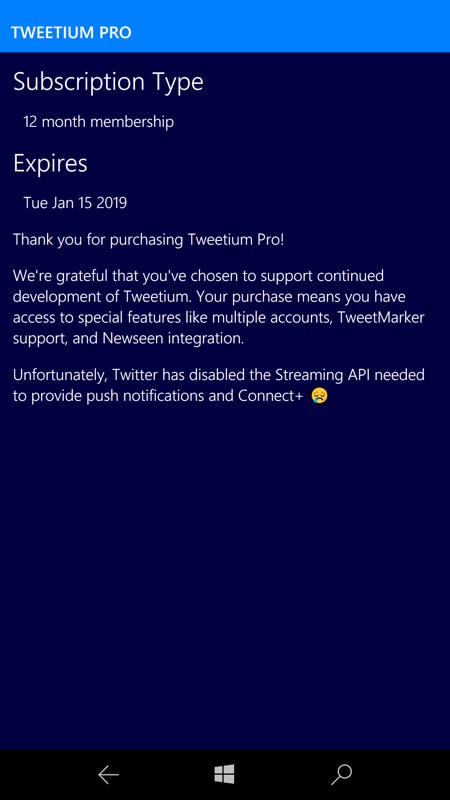 The benefits of Tweetium 'Pro' are much less now, but the help screen details what is and isn't now covered, plus Tweetium's developers aren't taking any more 'Pro' money for the time being.

What I don't understand is why Tweetium can't detect a new DM on a background refresh and then trigger a toast, etc. Maybe something like this can be worked on for a future update? Or perhaps it's just too crippled, as it would fall back to every 20 minutes, as is typical with background processes under Windows Phone 8.1 and Windows 10 Mobile - and who wants a 20-minute-delayed DM?

As usual, Tweetium is a commercial UWP application and is about £2.50 in the UK Store, but well worth it, and works on phone, tablet, laptop, and so on. Just be aware that DMs won't now ping your phone and that you should either seek other messaging systems (SMS, Whatsapp, Telegram, etc.) or switch to the Twitter client on another platform. Shame.