ilomilo is a 3D puzzle game featuring the game's two main characters, ilo and milo. The problem is that they always seem to get separated, and they don't like this, so your job is to help them. This involves puzzling your way around a 3D maze using on-screen and accelerometer controls. 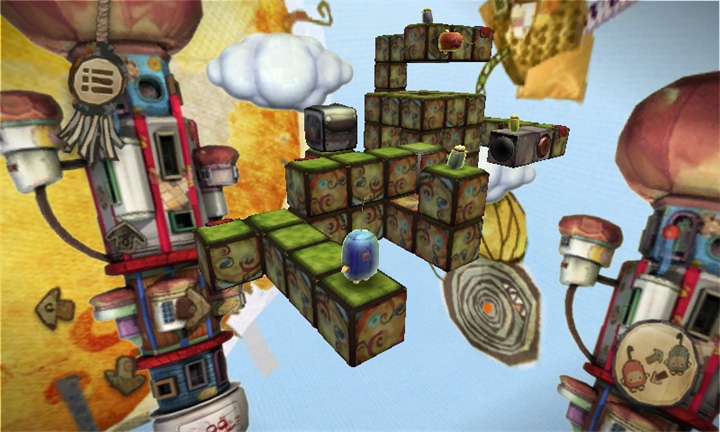 The aim of each level in ilomilo is therefore to reunite the characters. They live in a 3D world on maze like structures made of cubes and you control them and make them walk along these 3D structures until they meet. Both characters are playable and switchable in-game so you can try completing the levels as ilo, milo or both. The levels start very easy in the tutorial but the difficulty soon ramps up as you realise the worlds they live in don't have a real "up" or "down", so some levels require you to walk over the edge of a cube and along the sides, and even underneath the cubes. This 3-Dimensional aspect makes you really think in the latter levels. 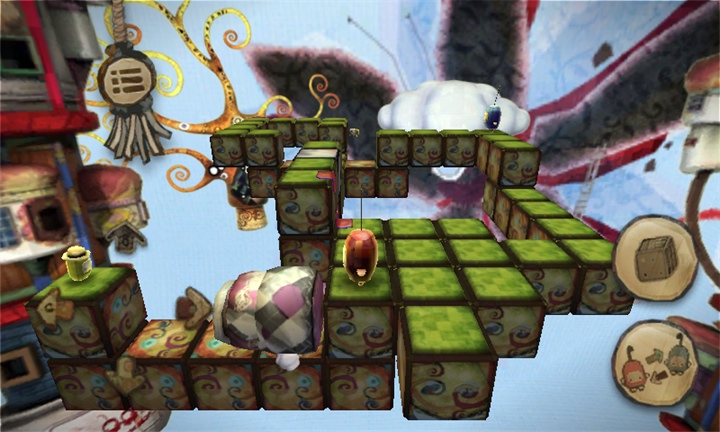 Controls are simple and unobtrusive. You have 4 directional arrows at the bottom left of the screen and a single button on the bottom right that switches between the characters. There is also an "action" button that only appears when it is needed, such as activating switches or picking an item up.

To add challenge to the mazes, some paths are going to have dead ends, or gaps that don't seem traversable. Around the level will be solutions, and this include boxes that can be carried and dropped into gaps, boxes that expand to cover a number of gaps, jumping platforms, and plunger cubes. For nearly all of these puzzles, you will need to get ilo and milo to work together before they can reunite. The 3D aspect also adds a level of disorientation and you can quickly forget how to get back onto the right plane of the maze. 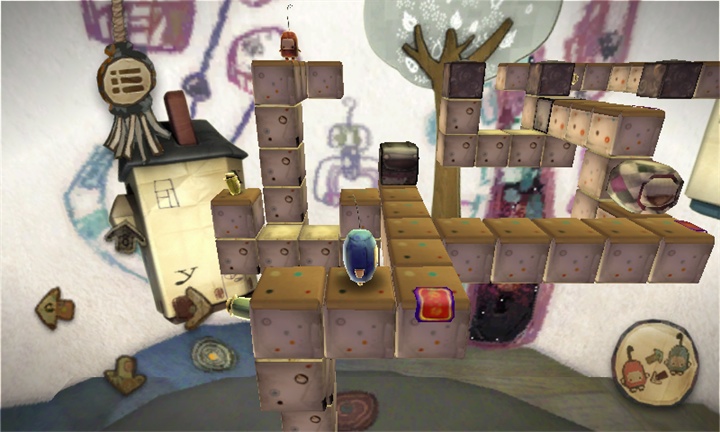 As an Xbox Live title, it's fully equipped with achievements that range from completing certain levels, to the collection of eggs dotted around the levels, and also the rescue of Safkas, who are little baby ilo/milo like people. For repeat plays there is the challenge of completing levels in a lower "Total Cubes Travelled" score.

Matching the stylish gameplay are the sounds and graphical presentation. The structures float in a 3D world (think Super Monkey Ball) covered with surrealist colourful artwork. This 3D world is mapped to your phone's accelerometer and subtly moves in the background as your phone moves during gameplay. The music is quite cutesy but fits the characters and their world very well.

Overall, at £3.99, its not the cheapest of games, but it is original and exclusive to Windows Phone 7 (and the Xbox). The charming artwork, characters and surreal worlds looked stunning on the Samsung Omnia 7 and load times were fairly quick. I think it is a must have for anyone that likes puzzle games.