Here's the latest in my growing series of cameraphone 'tutorials', or at least explaining the thought behind various successful phone-shot photos. In this case, a look at using the Lumia 'panorama' mode in its Camera app to mimic the use of a wide angle lens.

My series 'Anatomy of a Lumia photo' (here's #1) has proved popular, even though I cheated with the HP Elite x3 instead for #2. #3 had a lovely clock, #4 was all about framing, in #5, I got down and dirty with nature, in #6 I had a rosy dilemma to solve, and in #7 I took a satisfying low light snap in appalling weather. In #8, I got extremely close to an impressive moth, in #9 Andrew Elliott was in Budapest at night, and in #10, I was shooting in early morning sun... 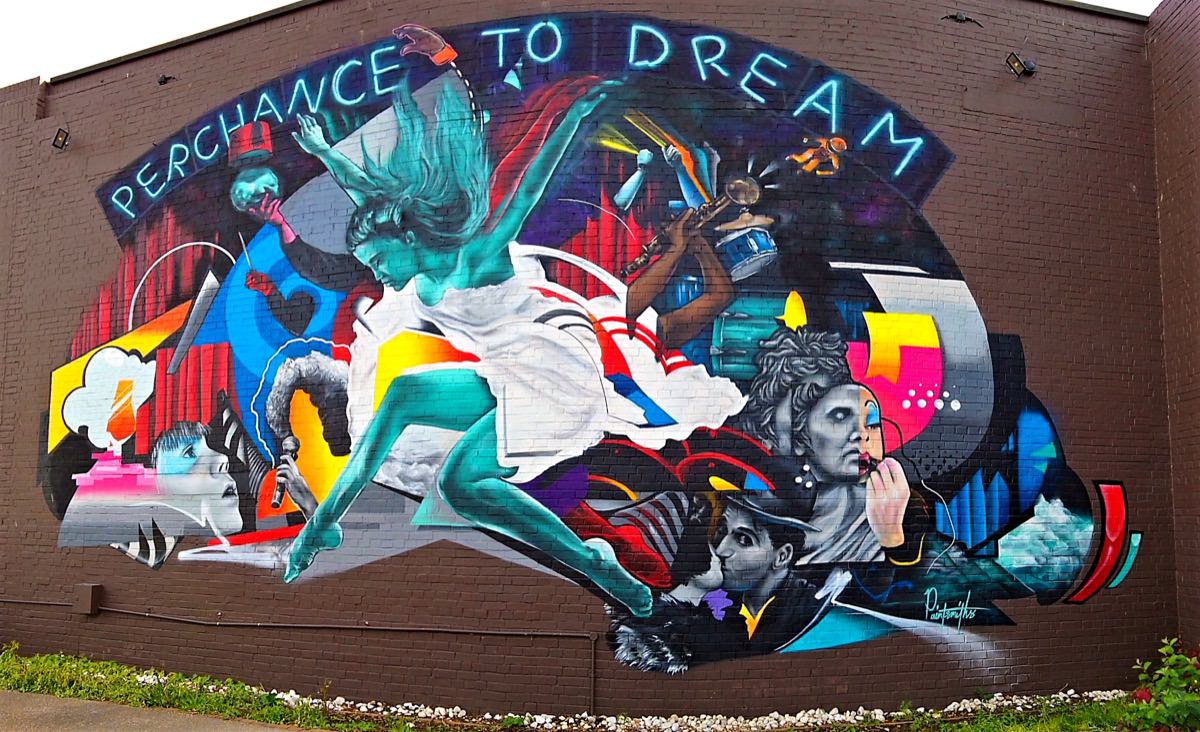 Nothing too special, you might think - except that you'll notice an unnatural curve along the bottom and top of the frame, giving the clue that all is not quite as it seems.

The mural shown is on the side of the Brewhouse theatre in Taunton and is huge. Around 20m long and 10m high - really rather impressive, and still in great condition. Worth a snap, I thought. So, mid-morning, standing around 20m away I pointed my Lumia 950 XL at it, square on: 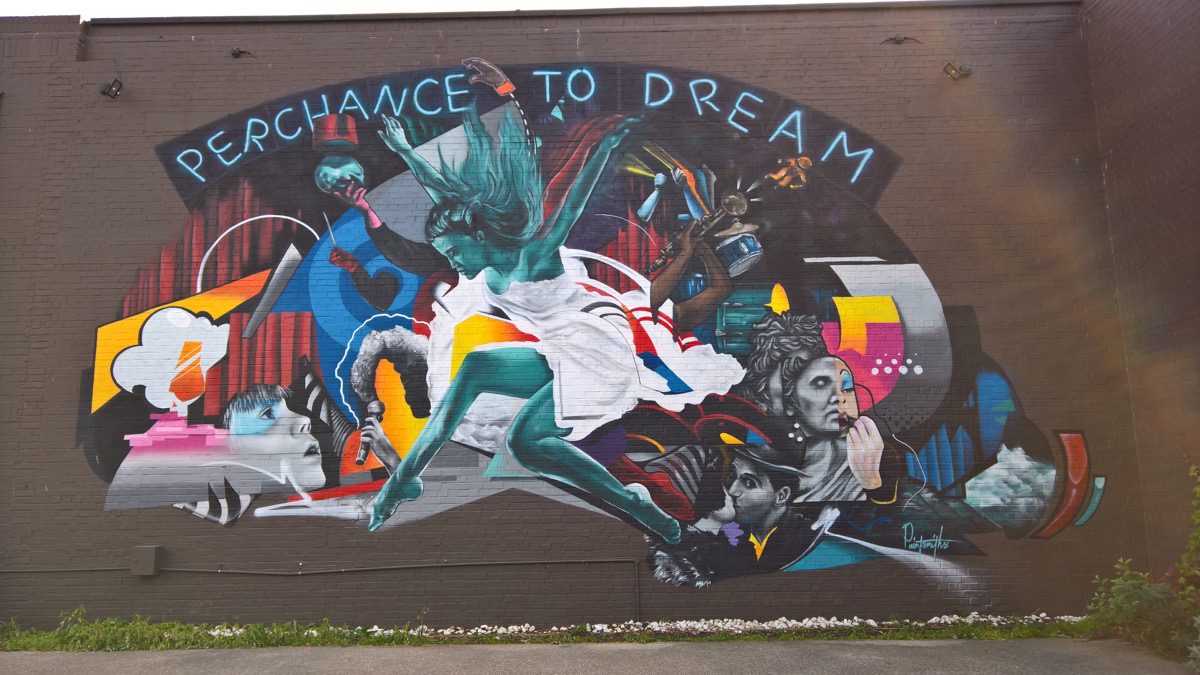 Hmm... this also meant shooting into the sun, which was behind the mural/building. Resulting in the ugly flaring in the lens seen here. Now, in an ideal world, I'd have come back at the end of the day, hoped for some sunshine still and maybe even sun on the mural itself. But life's not like that, I was only in Taunton for an hour and so I had to improvise.

I didn't want to shoot off at an angle, i.e stand in the shade but not square on to the mural, because the graphics would be skewed horribly. So I stepped in closer to escape the sun into the phone camera lens: 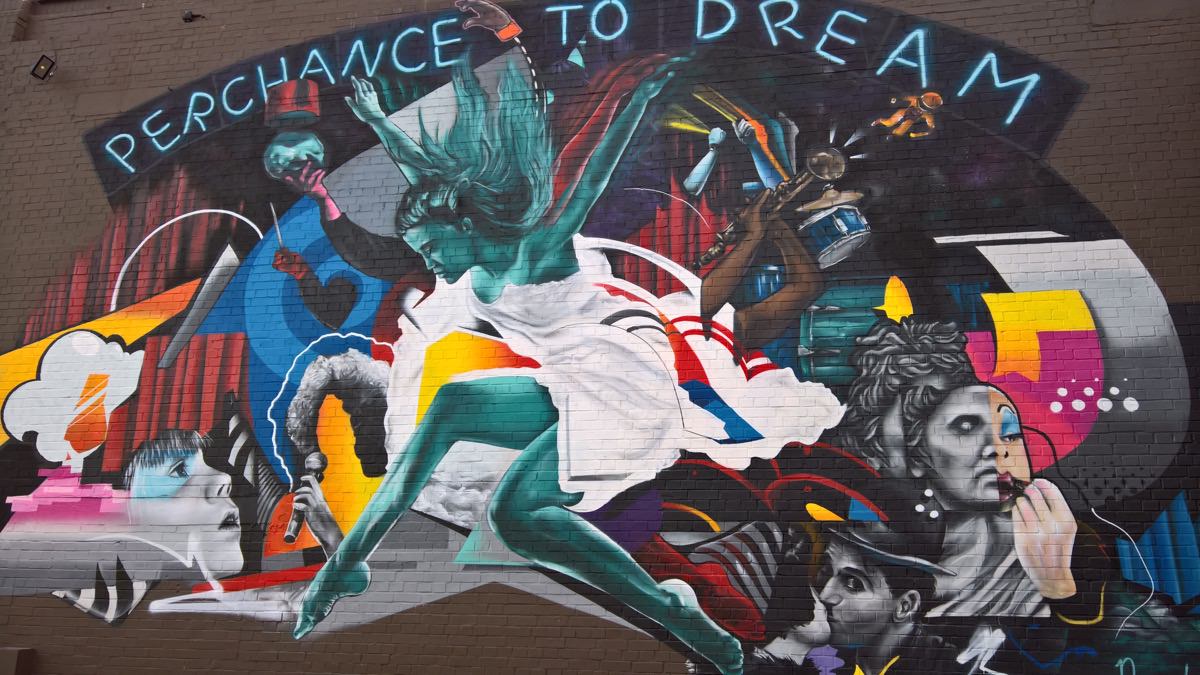 But this meant that I was now too close and that the edges of the mural were lost.

Time to improvise. I switched to the 'panorama' mode in the Windows 10 Camera application. This is really designed, as the name suggests, for subjects quite a bit further away and for wide sweeps of a landscape, but I wondered whether I could sweep around the mural from only about 10m away and get an interesting result: 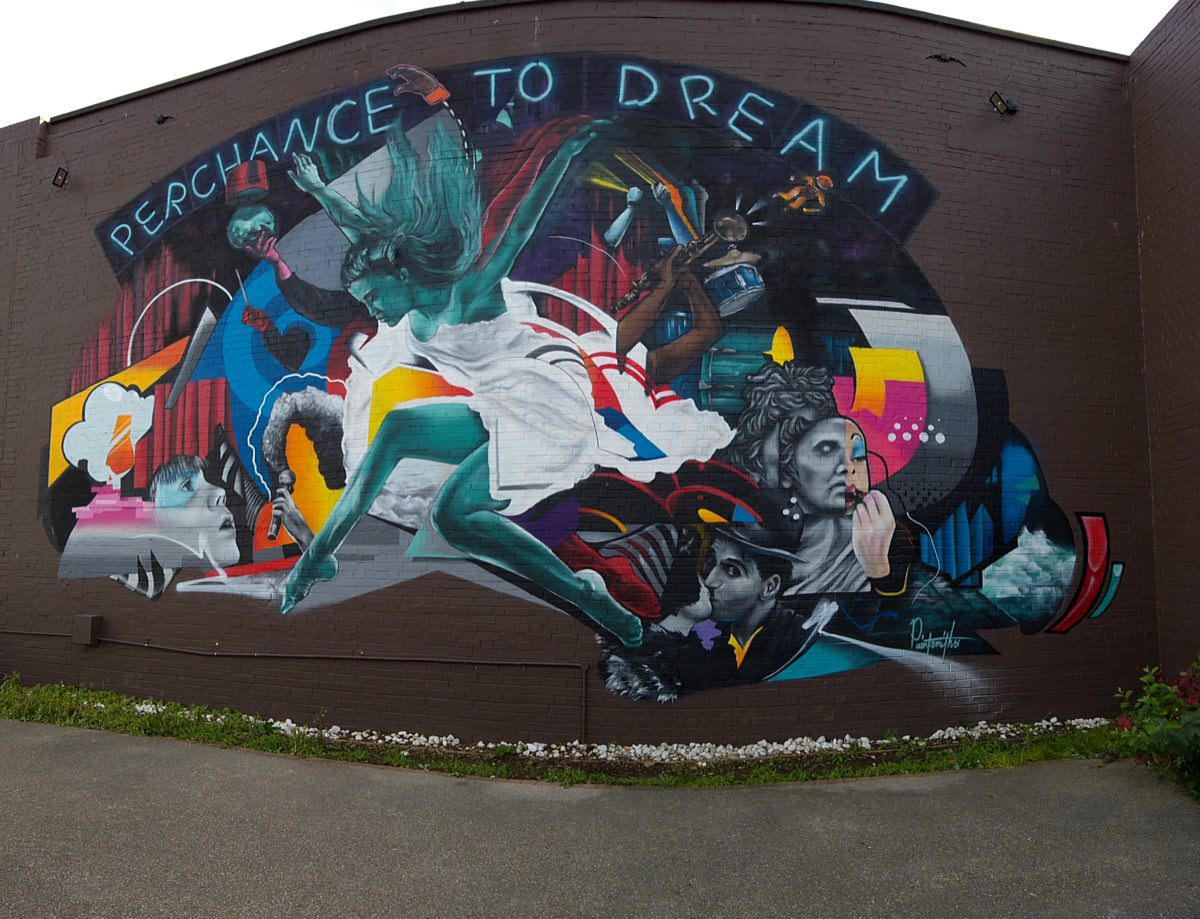 It's true that the panorama taking process has its own share of optical distortions, especially when your subject isn't at 'infinity', but on the irregular shapes and patterns of the mural I was on pretty safe ground and I was pleased with the photo I'd obtained.

I wasn't quite done, though, since there was too much foreground, plus taking this in the shade made for colours that were too muted. Happily, all Lumias come with the (ex-Nokia) Lumia Creative Studio application, and it's a doddle in this, from the 'Edit' menu in Windows 10 Photos, to crop out the foreground also to punch up vibrance and clarity: 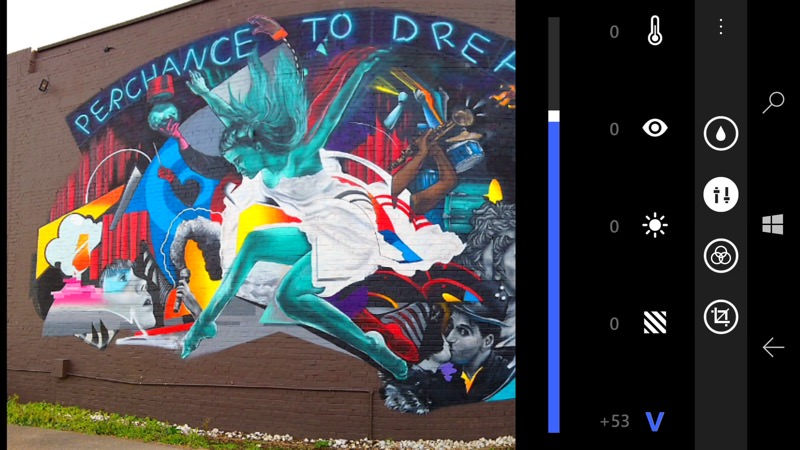 I was happy anyway. Who needs a LG G6 Android phone (with dedicated wide angle lens) when you can get decent results by improvising with the 'panorama' mode under Windows 10? (OK, tongue in cheek, the results here aren't a patch on what the G6 would have achieved...!)

I wanted to see what else could be achieved with this technique, so tried a few more subjects. Shooting from the footbridge by the theatre, here's a standard photo looking down the river: 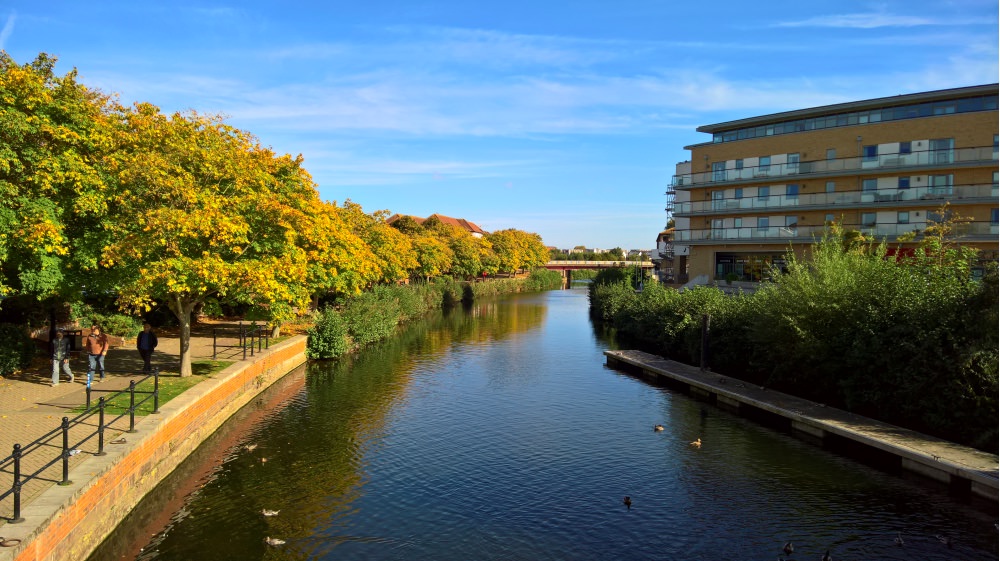 And here's the same scene, but using panorama mode and sweeping around through about 90 degrees: 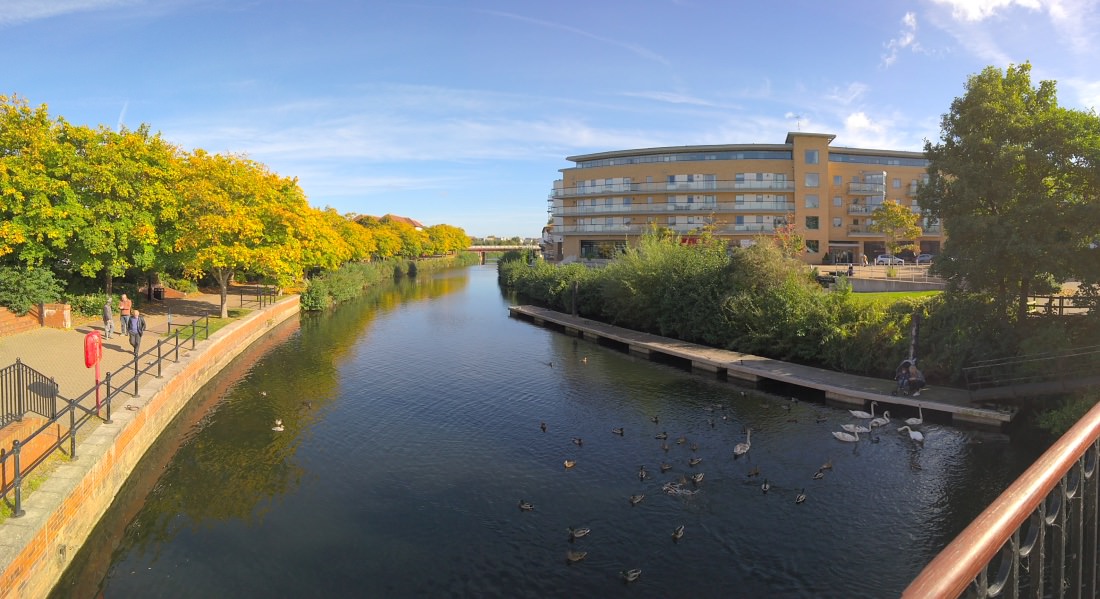 So, quite effectively, I'm getting wide angle shots without a wide angle lens. Interesting.

There are downsides, of course. Overall resolution is lower, since panorama mode is limited to around 1000 pixels in vertical height, for obvious reasons. So you typically end up here with a 3MP or 4MP image at most. Plus you don't get the usual Rich Capture options and you don't get focussing refinements.

One more example, I was up on the hlls nearby and loved the open feel, with a dramatic sky and some hill ponies to add interest: 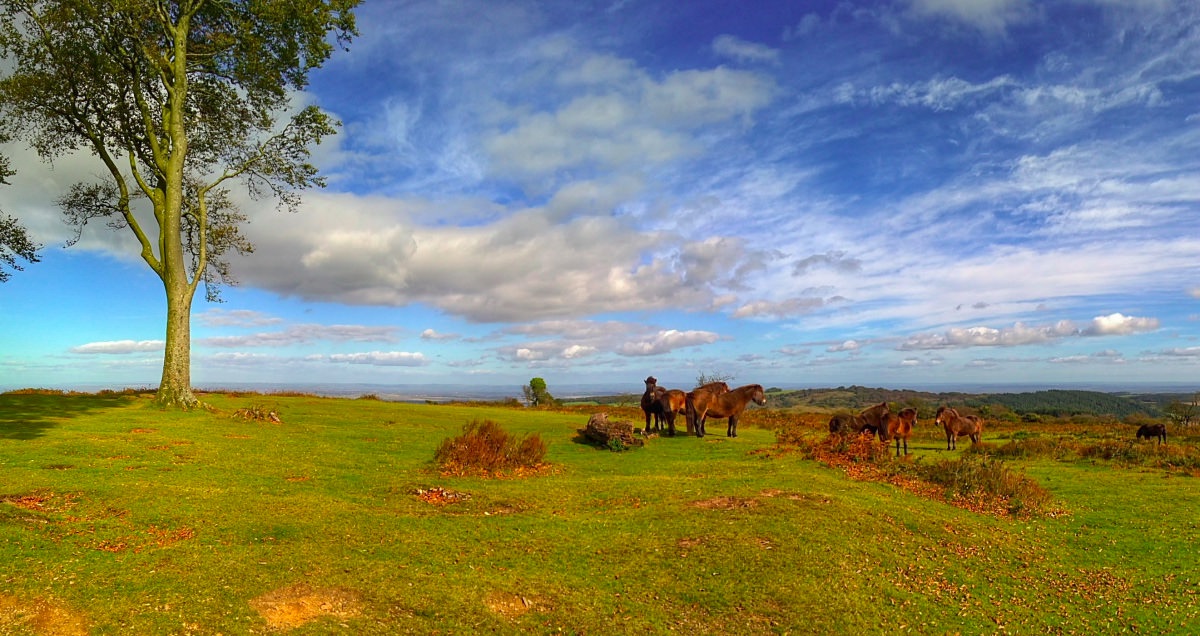 True, this is more of a traditional panorama, but by limiting my sweep to not much more than 90 degrees again, the end result is more photo-like than the typical long-and-thin 'panorama' image, which is often so stretched in shape that you can never do anything with it.

So, shooting in panorama mode and limiting your sweep round turns out to be surprisingly effective. Comments (and examples) welcome if you've ever done anything like this!