AdDuplex publishes regular reports on the breakdown of devices (and countries / languages) active in the Windows Phone ecosystem based on data drawn from its advertising network (3,568 apps running AdDuplex SDK version 2.0 for the March report). The data represents a sampling of the active installed device base for Windows Phone, albeit one biased to those users who are more likely to install apps, as of March 20th 2014.

The AdDuplex data allows us to make a rough estimate of the number of active Windows Phone devices. Adding up known shipping totals, while allowing for the fact that some devices are no longer being actively used, we can estimate that there are around 55 million active Windows Phone devices. This would suggest Nokia has sold around 19 million Nokia Lumia 520 handsets in total. 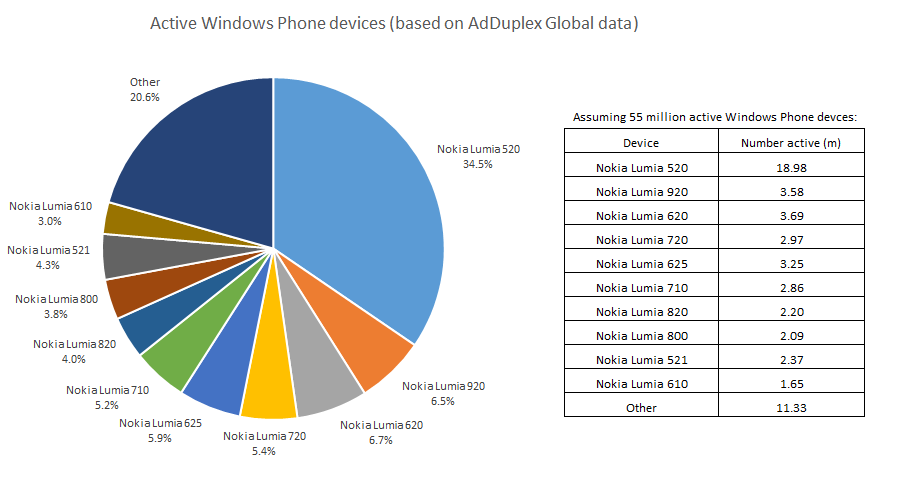 In terms of month to month changes, we are now starting to see the older Windows Phone 8 devices declining in the rankings (e.g. Nokia 920, 820, 720). This is a trend we expect to continue as the next generation of devices comes on stream. The Lumia 625 continues to sell well, primarily a result of its low cost. This would suggest we may see the Lumia 1320 be the first of the generation 3 devices to enter the top ten.

The chart below, which shows a summary of the AdDuplex global device data from the last fifteen months, gives a clear illustration of how the lower specification Windows Phone devices are making up an ever increasing proportion of Windows Phone devices. It is most clearly seen in the rise of the Lumia 520, but a similar pattern can also be seen for the Lumia 620 and 625. 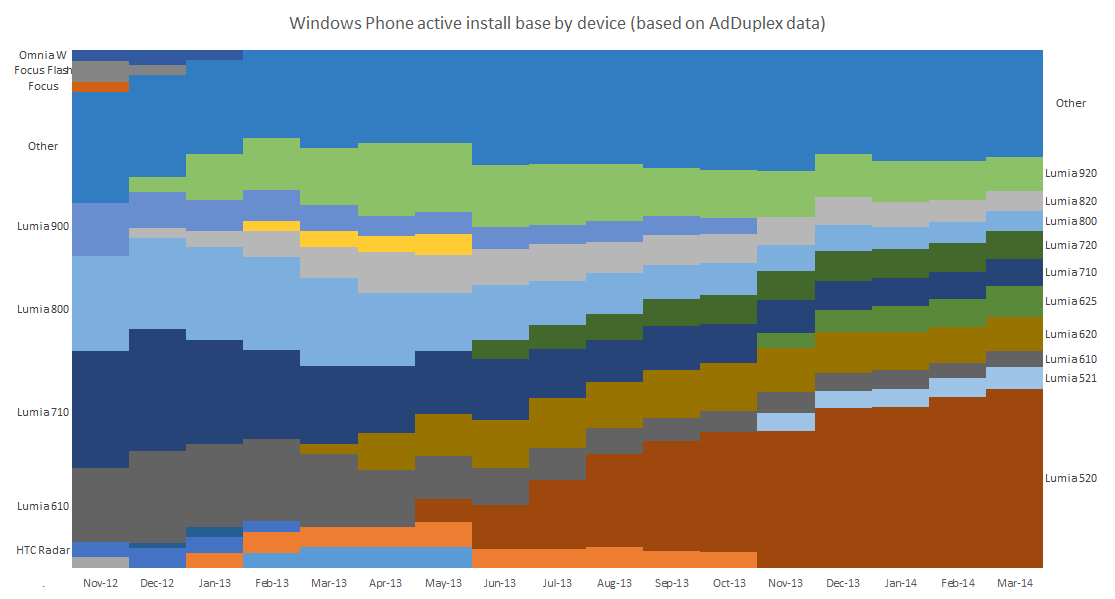 The global figures hide considerable regional variations. The full AdDuplex report has the numbers for the US, Greece, France, Poland, India, Ukraine, and Malaysia. The popularity of the Lumia 520 is apparent in almost all markets, but some countries, such as the Ukraine, show slower adoption of Windows Phone 8.

Nokia remains the leading device manufacturer for Windows Phone devices, and 93.5% of active Windows Phone 8 devices are made by the Finnish manufacturer. HTC remains in second place on 4.3%, Samsung in third with 1.3%, followed by Huawei in fourth place with 0.8%. We expect this to start changing in a few months time as other manufacturers announce and release Windows Phone 8.1 device. Companies like Karbonn and Lava are expected to introduce low cost devices that will compete against the Lumia 520.