AdDuplex publishes regular reports on the breakdown of devices (and countries / languages) active in the Windows Phone ecosystem based on data drawn from its advertising network (2,087 apps running AdDuplex SDK version 2.0 for the November report). The data represents a sampling of the active installed device base for Windows Phone, albeit one biased to those users who are more likely to install apps, as of November 22nd 2013.

The AdDuplex data allows us to make a rough estimate of the number of active Windows Phone devices. Adding up known shipping totals, while allowing for the fact that some devices are no longer being actively used, we can estimate that there are around 43 million active Windows Phone devices. This would suggest Nokia has sold around 11.4 million Nokia Lumia 520 handsets in total, with around 1.5 million Lumia 520s sold in the last 30 days. 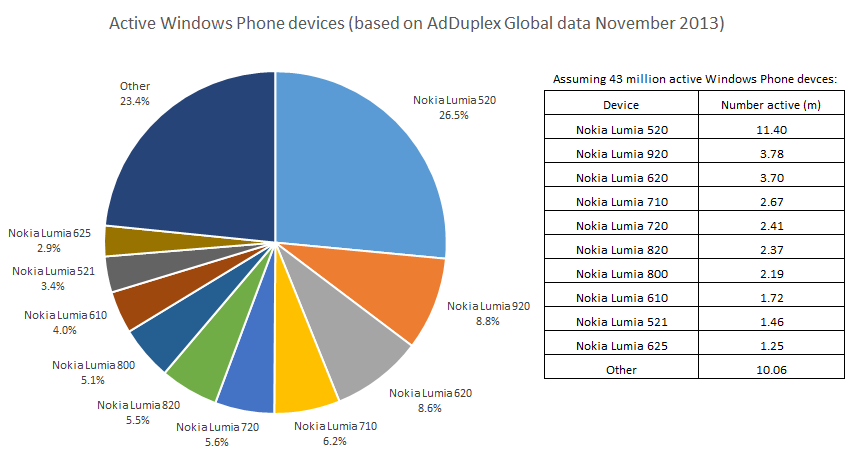 In terms of month to month changes, the most notable is the older Windows Phone 7 devices declining in the rankings, something to be expected given they are now on sale in only a small number of markets. Also noteworthy is the Lumia 720 moving from to 7th to 5th in the rankings, suggesting the mid-range device may have longer sales legs than previously anticipated. 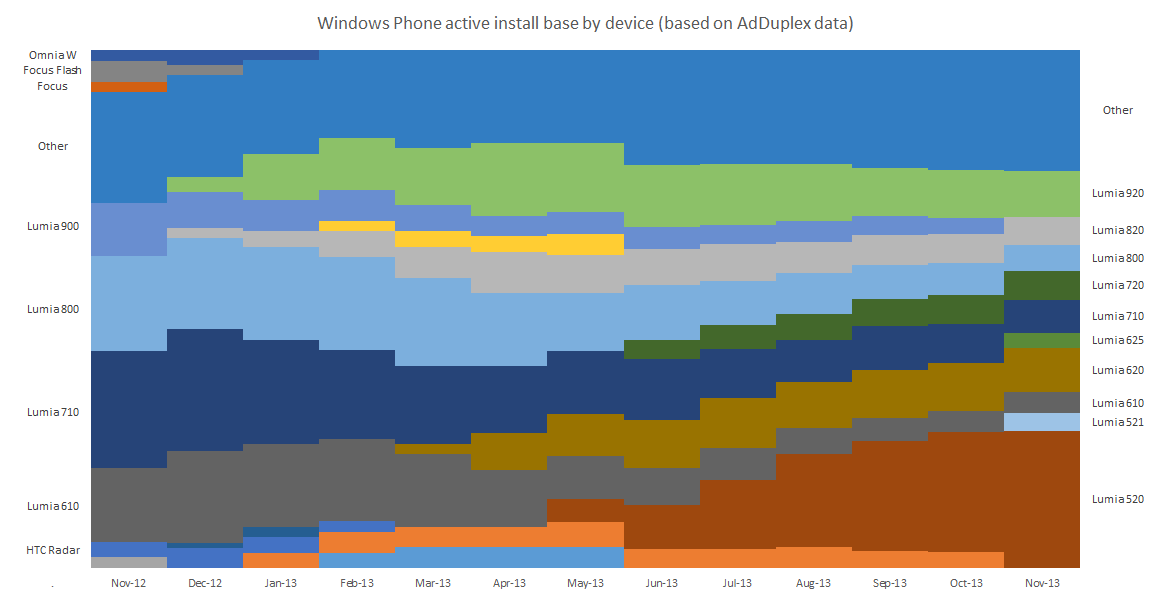 The global figures hide considerable regional variations. For example, in Germany the Lumia 920 is the post popular device (17.4%), followed by the Lumia 520 (9.5%), the reverse pattern to most markets.

Nokia remains the leading device manufacturer for Windows Phone devices, and 90.0% of active Windows Phone 8 devices are made by the Finnish manufacturer. HTC remains in second place on 7.0%, Samsung in third with 1.8%, followed by Huawei in fourth place with 1.3%. As in the last few months, there have been only minor changes from the preceding months, although Nokia has, as we predicted, broken through the 90% barrier.

Windows Phone 8 devices now represent 75.3% of all active Windows Phones, notably up from last month (70.9%). This trend should continue as more users reach the end of a two year phone life cycle pattern.