Nokia's overall results were below market expectations (expected operating loss of €641 million), though sales were ahead of expectations (€7.32 billion expected). However, the company reported a stronger than expected cash position (net cash of €4.2 billion, against expectations of €3.7 billion). Nokia's net cash position was lower on a quarter-by quarter basis due to a €742 million dividend payment to shareholders, but the cash position from operating activities in Q2 2012 was positive €102 million, primarily due to €400 pre-payments from existing IPR (patent) licensees.

Nokia's cash position is an important measure because it dictates how long the company can continue to lose money while completing its strategy change. Today's results indicate that Nokia's position is more stable than some analysts feared. While the overall results are, as anticipated, grim, the Nokia leadership team continues to do a good job of controlling costs and cash levels in the context of the company's current situation. This is reflected in a 15% rise in Nokia's share price today.

The headline loss of €826 million is a big number, but a significant component of it is a write down in value as a result of restructuring costs. This can be seen more clearly in Nokia's non-IFRS figures. Nokia's Non-IFRS operating loss was €327 million, with Devices and Services non-IFRS loss at €365 million, and margins at -9.1%. Non-IFRS results exclude special items for all periods and can be seen as measures of underlying performance. In Q2 2012 the non-IFRS results exclude €499 million of charges, related to restructuring charges and intangible asset amortization. Similar charges are likely in Q3 and Q4 2012 as a result of recently announced cost cutting and job losses.

"Nokia is taking action to manage through this transition period. While Q2 was a difficult quarter, Nokia employees are demonstrating their determination to strengthen our competitiveness, improve our operating model and carefully manage our financial resources.

We shipped four million Lumia Smartphones in Q2, and we plan to provide updates to current Lumia products over time, well beyond the launch of Windows Phone 8. We believe the Windows Phone 8 launch will be an important catalyst for Lumia. During the quarter, we demonstrated stability in our feature phone business, and enhanced our competitiveness with the introduction of our first full touch Asha devices. In Location & Commerce, our business with auto-industry customers continued to grow, and we made good progress establishing our location-based platform with businesses like Yahoo!, Flickr, and Bing. We continued to strengthen our patent portfolio and filed more patents in the first half of 2012 than any previous six month period since 2007. And, we are encouraged that Nokia Siemens Networks returned to underlying operating profitability through strong execution of its focused strategy.

We are executing with urgency on our restructuring program.  We are disposing of non-core assets like Vertu. We are taking the necessary steps to restructure the operations of the company, which included the announcement of a new program on June 14. Faster than anticipated, we have already negotiated the closure of the Ulm, Germany R&D site, and the negotiations about the planned closure of our factory in Salo, Finland are proceeding in a collaborative spirit.

We held our net cash resources at a steady level after adjusting for the annual dividend payment to our shareholders. While Q3 will remain difficult, it is a critical priority to return our Devices & Services business to positive operating cash flow as quickly as possible."

Of the smart devices volume of 10.2 million, 4 million were Nokia Lumia devices and approximately 6.1 million were Symbian devices. The Lumia devices sales were slightly ahead of an average analyst estimate of 3.75 million units and take total Lumia sales to around 7 million units. The average selling price was €151 (up 7% from 141 in Q2 2011 and up 6% from 143 in Q1 2012). The average selling price of Lumia devices was €186 in Q2, compared to €220 in Q1 2012. Devices & Services margins were negatively effected due to a recognition of a €220 million cost related to excess component inventory and future purchase commitments, an indication of the difficulty Nokia is having in predicting device sales volumes. 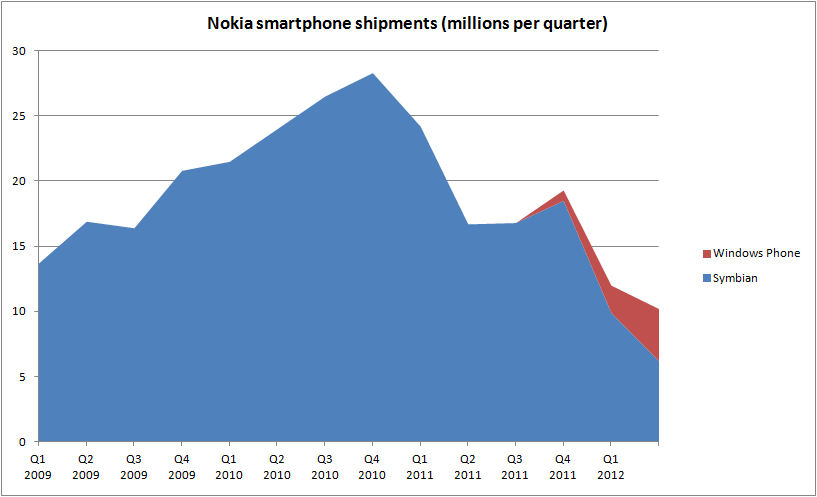 In Q2 Mobile Phone volumes were 73.5 million, up 2% from 71.8 million in Q2 2011, and up 4% from 70.8 million in Q1 2012. The results indicated that, thanks to the successful roll out of its Asha range and dual SIM devices, Nokia has been able to successfully defend its position in the mobile phone space, with the increased device volumes an impressive performance in the context of a shrinking overall market (as more feature phone owners switch to smartphones). Nokia did note that the volumes of higher end feature phones were adversely effected by competition from affordable smartphones and full touch feature phone devices.

Nokia's Location & Commerce division reported sales of €283 million, up from €271 million in Q2 2011 and €277 million in Q1 2012. The increase was mainly due to the higher recognition of deferred revenue related to sales of map platform licenses.

Looking forward, Nokia expects its non-IFRS Devices and Services operating margin in Q3 to be similar to that of Q2 (-9.1% with a +/- range of 4%), underlining that Nokia's tough times will continue well into the second half of the year. Q3 2012 will be a very tough period for Nokia as it looks to continue to sell Symbian devices and Windows Phone 7.5 devices, ahead of a Windows Phone 8 launch in the last quarter of the year. As a result, the sales level of the Lumia 610 and low cost Symbian phones are likely to be the major varying factor in Q3 2012.

Nokia's outlook for Q3 2012 is based on a number of factors, including competitive industry dynamics and consumer demand relating to Lumia products. The company expects Q3 "to be a challenging quarter in Smart Devices due to product transitions".

The priority for Nokia is to return the Devices & Services division to profit as quickly as possible. This is unlikely to happen in 2012, but the situation may improve in Q4 2012 and H1 2013 with the release of Windows Phone 8 devices, assuming Nokia can continue to defend its position in the mobile phone (feature phone) business.