The Nokia Music+ service is now available in the UK for all Nokia Lumia devices (both Windows Phone 7 and 8). The premium version of Nokia's music service allows for unlimited skips, unlimited downloads (of music 'Mixes'), higher quality streaming and downloads, lyrics support, and a web-app player that lets you use the service on any Internet-connected device (PC, Smart TV, tablet). A free 7 day trial is available for all users, with the full subscription costing £3.99 per month. 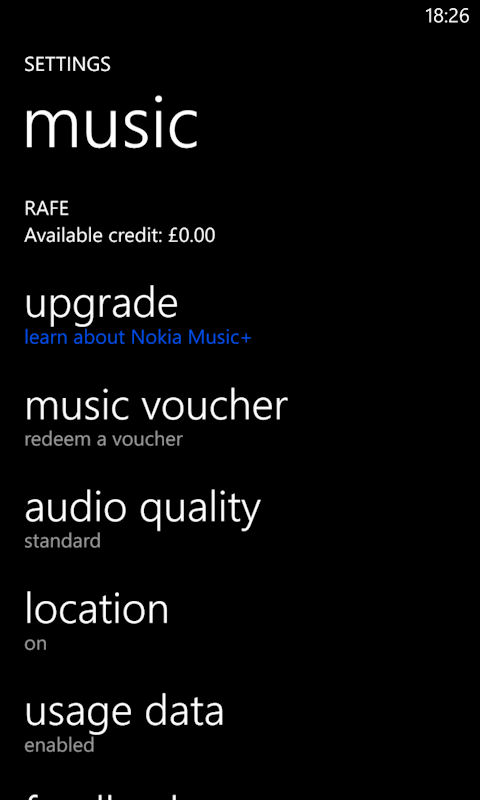 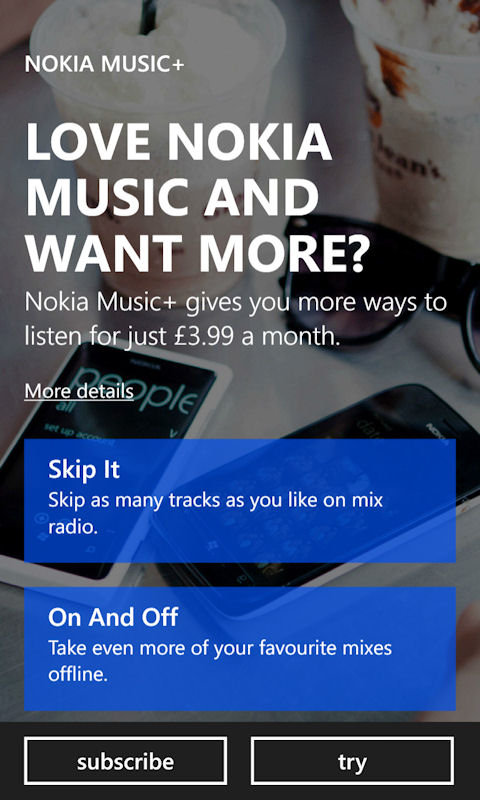 A Nokia Music+ subscription can be purchased and managed in the settings section of the Nokia Music Windows Phone app. In some cases it may be necessary to update to a more recent version (version 3.7.3 or above) of the app through the Windows Phone Store. Users will also prompted to upgrade if you run up against the limits (skips, mix downloads) while using the standard version of the service, but otherwise it's still a relatively soft sell.

A subscription is linked to a Nokia Account, not to an individual phone. This means it is possible to use the service on more than one device, and also makes it easy to keep using the service should you upgrade to a new Lumia device.

When first subscribing to the service the app walks you through the benefits of the service:

Once a subscription is active, the Nokia Music app will automatically enable the premium features within the app. For example, on the now playing screen, a lyrics button is added at the top right of the screen. In addition, the skip button will no longer become greyed out if more than six skips are made in an hour. The name of the Mix is displayed at the top of the screen, but will also periodically change to display the quality of the current stream (high quality or standard). 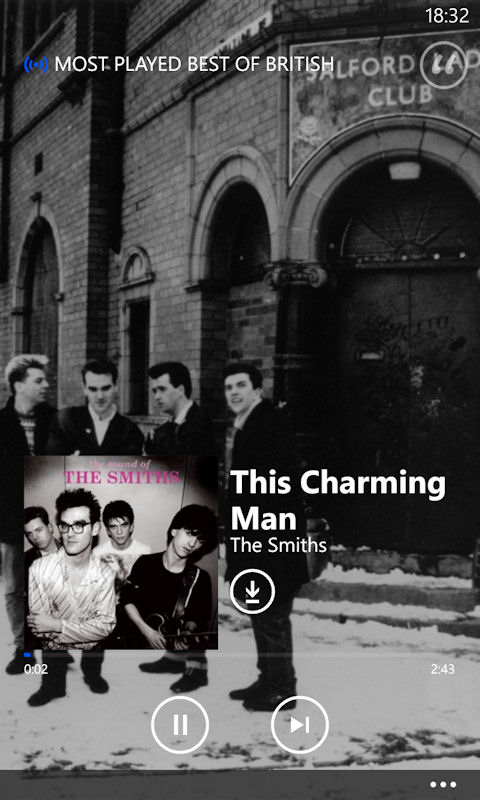 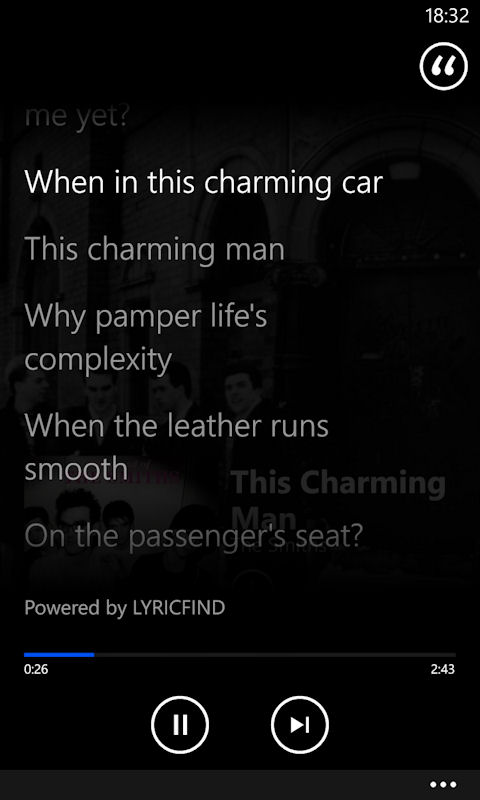 The current status of a Nokia Music+ subscription is shown in the app's settings. In addition, an extra setting "audio quality" is added, allowing users to configure whether to allow high quality audio streams when downloading or streaming over WiFi and the mobile network (2G/3G/4G). 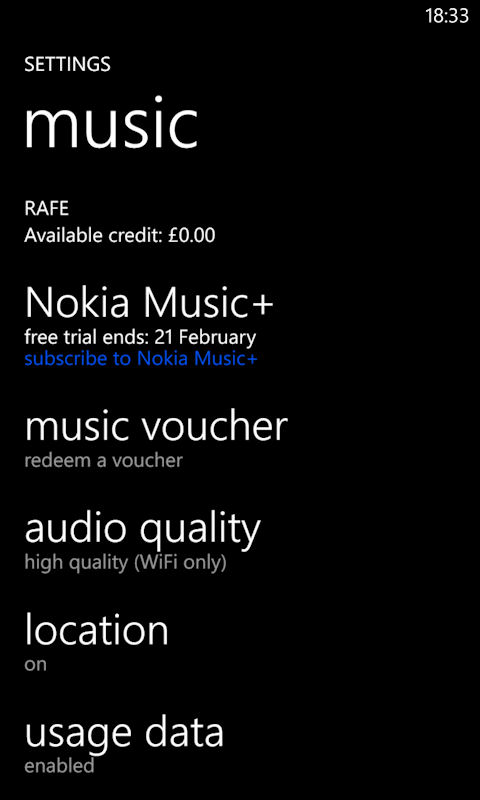 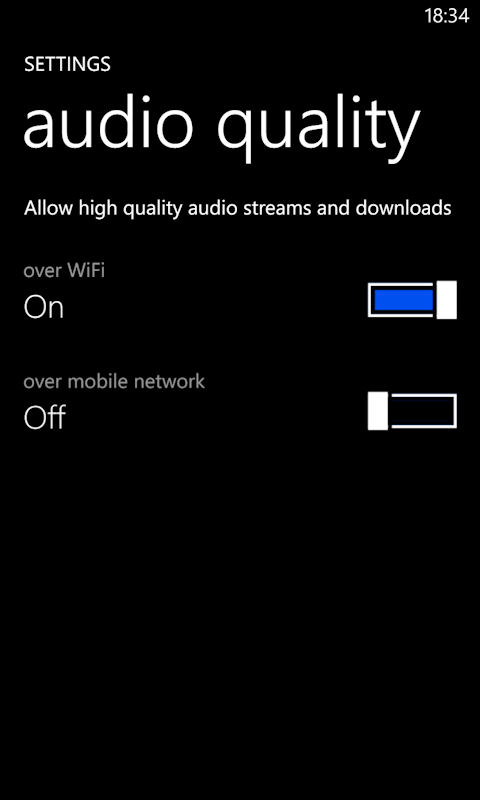 As noted above, an additional feature of the Nokia Music+ subscription is access to the mix radio functionality (radio streaming) through a web-based app. This can be used by an Internet-connected device (e.g. PC, laptop, tablet, smart TV). The HTML 5 player can be accessed through music.nokia.com by tapping on the Mixes button (you'll need to be signed into a Nokia Account and subscribed to the Nokia Music+ service to see this).

A list of the currently available Mixes is shown in the form of thumbnails for each Mix, divided by category (the same ones used in the Nokia Music app). Clicking on any of the Mixes starts playback of that Mix. The name of the currently playing Mix, track and artist, together with music controls and a purchase link, are shown at the bottom of the browser window. 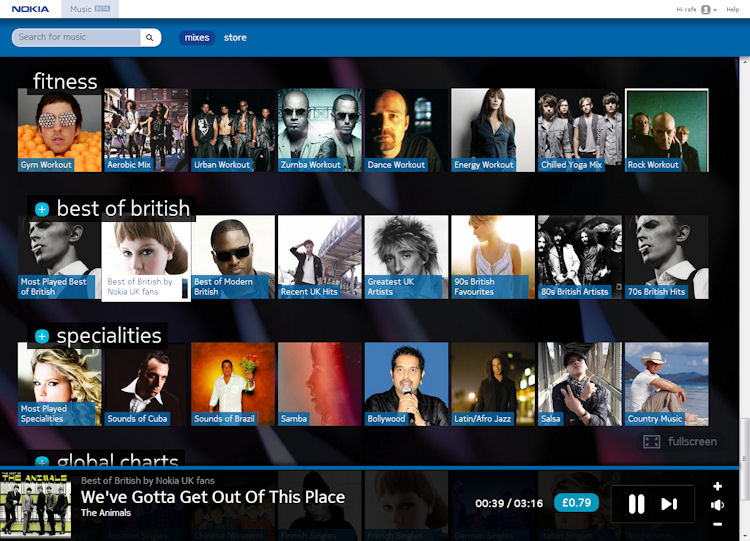 A full screen option is also provided, with larger controls and an appropriate album or artist image used as a background image. This essentially provides a contextually relevant visualisation, which is a nice extra if you're leaving music running on a device while doing something else.

Currently there's no way to create custom Mixes as there are on the phone, which is disappointing, and there appears to be no syncing of custom Mixes from the phone to the HTML 5 web app. However, given the mobile first nature of Nokia Music, the web app will almost certainly be seen as a secondary benefit for most subscribers, so it's unlikely this limitation will have a major impact on sign ups. 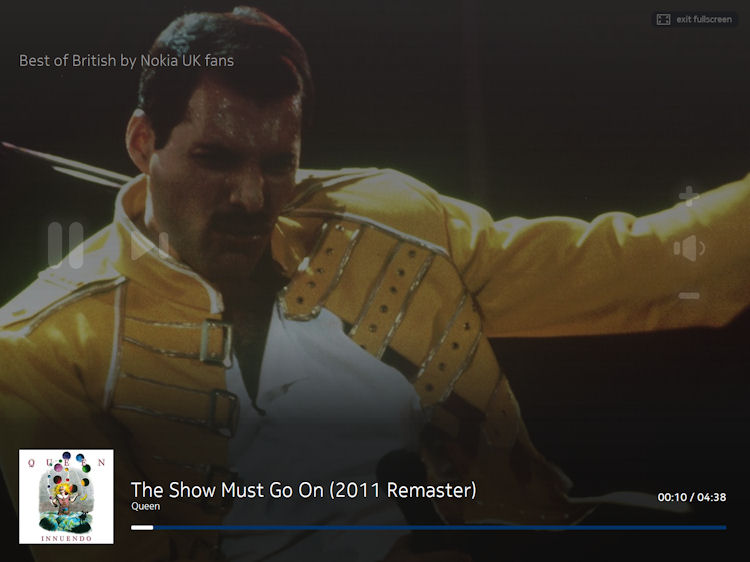 Nokia Music+ is expected to launch in additional markets over the next few weeks. Nokia has not provided a comprehensive list, but it is likely to parallel the markets in which the standard Nokia Music service is already available: