Do you remember I wrote recently about issues with the Xenon flash on the Lumia 1020, caused by the shutter speed being artificially slow? After doing some tests, I've noticed that the new Nokia Camera (rolling in Nokia Pro Camera and Nokia Smart Cam) is more intelligent with shutter speed when taking typical indoor/party/event shots, with photos appearing crisper and with more natural colours. In tests, clarity and colours now match or exceed those from Xenon-lit shots on the Nokia 808, previously the gold standard here.

In addition to the UI fix-up, very interesting to many will be the changes to shutter speed when shooting with Xenon flash, i.e. indoors and in low light at close quarters (typically in a pub or at a party or event, but also day to day shots in living rooms, etc.) You may remember that I had to write a tutorial on tweaking the shutter speed in Nokia Pro Camera in order to get crisper Xenon-list photos? [We've been used to all-frozen Xenon-lit shots on the Nokia 808 PureView, N8, Samsung Galaxy S4 Zoom and a handful of others, and - in theory - the Lumia 1020 should be able to match these.]

Now, Nokia's original aim had been to set shutter speed to 1/30s for all Xenon-list shots, with the idea that the Xenon flash would freeze motion, while the relatively long shutter time would gather plenty of ambient light as well and help 'fill in the scene'. My criticism was that 1/30s was slightly too long and led to enough light from the main subject being gathered from ambient light, resulting in 'ghosting' effects on what should be a crisp Xenon-lit subject, which was why I suggested lowering the shutter speed to 1/125s. In addition, the traditional 'white' light from the Xenon flash was overly tempered by incandescent yellow from the ambient light.

Nokia's imaging engineers were clearly listening to my diatribe and, although they didn't go as far as 1/125s and especially didn't want to set a particular speed 'in stone', the shutter speeds used by Nokia Camera in low light when the Xenon flash is fired now vary between 1/75s and 1/30s, depending on conditions, with an average being 1/50s.

Time for some proof though... Using my standard 'party shot mock-up' in varying lighting conditions, I flashed away with the Lumia 1020 with the new version of Nokia Camera and got the following results. In each case, click on the image on the page to download the full JPG and examine for yourself. 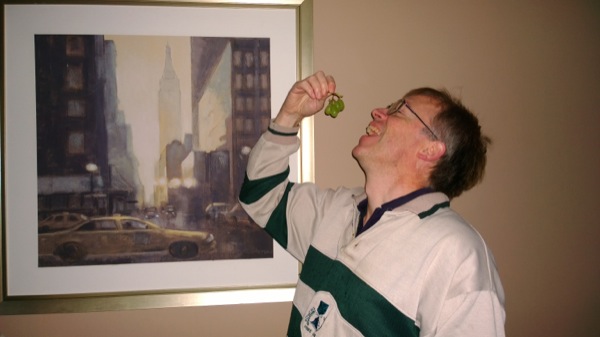 Shot in the pitch dark. As usual, I'm not posing, but laughing and moving - as people would do at a real event(!) The Lumia 1020's result is typically good, Xenon-frozen. 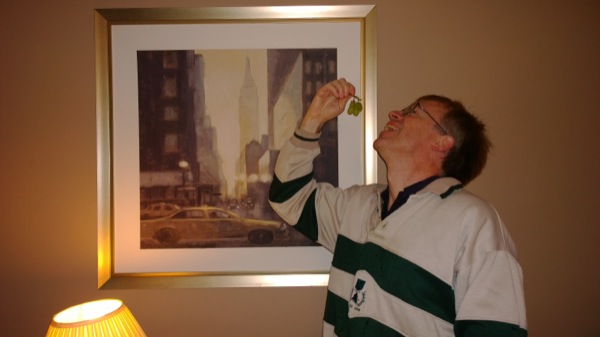 Shot with ambient lights. More warmth to the photo, but with a 1/56s exposure time (around half what it was in Nokia Pro Camera), there's only half the amount of ambient light pollution of the Xenon-frozen moving subject. I'd say that Nokia has got the balance about perfect here. The colours look spot on, all-round. 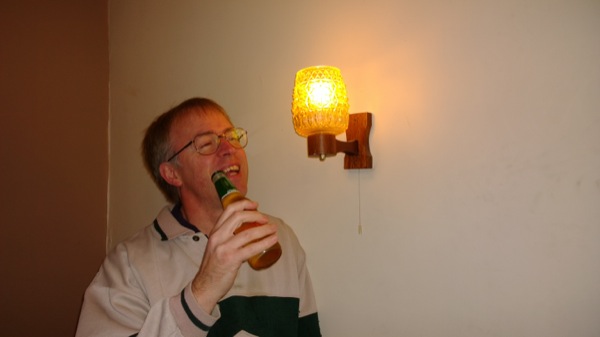 One more test, this time with strong ambient light, in that I was right next to a lamp (you can't control lighting positions at a party or in a pub, etc). Again, I was laughing and moving and yet the result is both Xenon-frozen and ambiently warm, yet without any blur caused by ambient-lit movement. The shutter speed here was 1/69s, so well under half what it was under Nokia Pro Camera.

In summary, flash photos of real people in real situations with the Lumia 1020 just got a lot better. I'll need a few weeks of real world shots before I'm completely satisified, but from the tests above I'd say that the 1020 now matches or exceeds devices like its predecessor, the Symbian-powered Nokia 808, in this regard.

Addendum: Also notable are two things. One is that there are some bugs in Nokia Camera as-is. Reframing and saving when the application is accessed from Photos often doesn't work, for example. A bug fix update is due in a couple of days.