myTube! has always one of the 'big three' in terms of Windows Phone or Windows 10 Mobile YouTube clients and it has just had a major rewrite for its v3.0 relaunch. Given that Google still doesn't see a need for a native first party YouTube client, I reckon that a slick alternative like myTube! in this next gen version is distinctly newsworthy.

The good news: it's terrific in ever regard. The bad news? If you've used it before then you'll probably have to spend a couple of minutes resetting it and signing in again. I show how below.

The developer intros v3 with:

This is myTube! v3.0, rebuilt from scratch to give oyu the best YouTube experience possible on all your Windows devices! Starting today, myTube! is faster, prettier, and easier to use than ever before.

myTube 3.0 has been packed with loads of new changes and features over its 14 months development period, way too many to list here. Some of the standout changes include Xbox support, seamlessly switching to and from background audio on mobile, syncing your viewing history to your YouTube account, myTube to myTube casting, and lots more...

Also new is, of course, a completely new modern UI, designed to suit phone, tablet, Xbox and desktop as well as each other, with the interface adapting as needed. Before you get going though, if you've had myTube! installed on your phone already then you'll probably need to clear out the data from the older version. If you don't then you'll run into the app looping around trying to sign into YouTube and no amount of trying to delete the account in the app helps.

So here's the procedure. Don't worry, it's quick and you'll be up and running in no time: 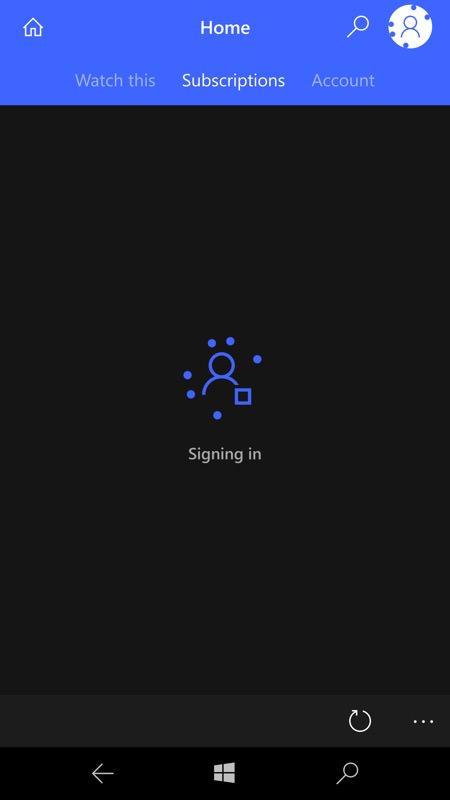 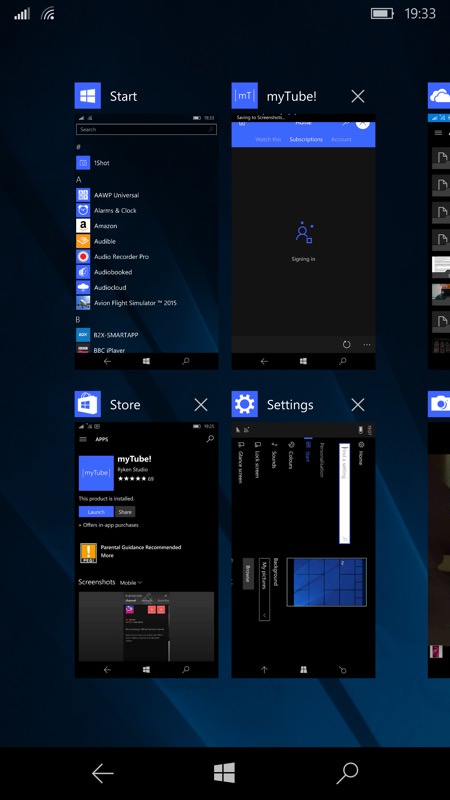 The issue I faced with upgrading from the old v2.x was that complete access to YouTube signed in features was missing, with busy 'dots' flying and no way in. The cure? First, check that myTube! is closed down by terminating it in the multi-tasking carousel. 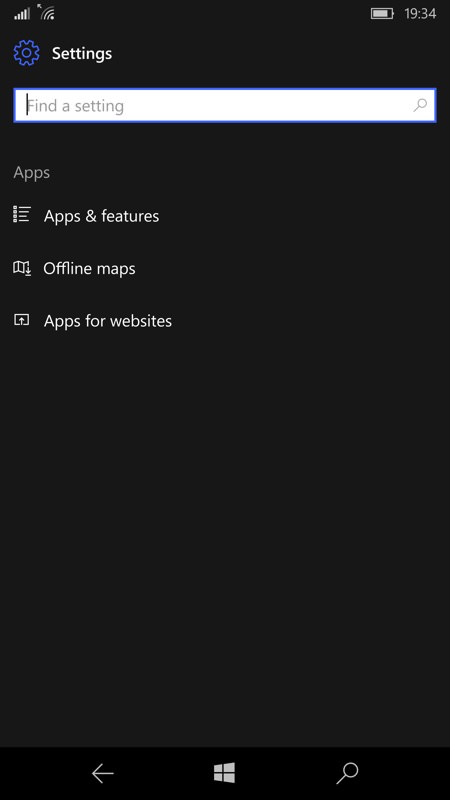 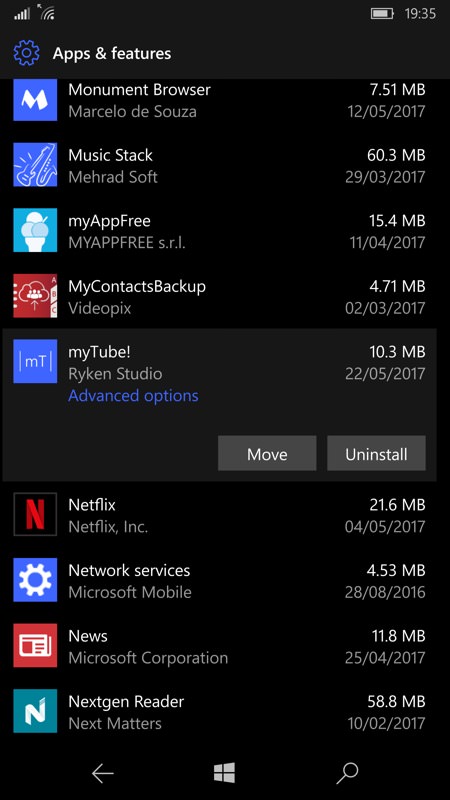 Then head for Settings/Apps and find the entry for myTube! Tap on 'Advanced options' 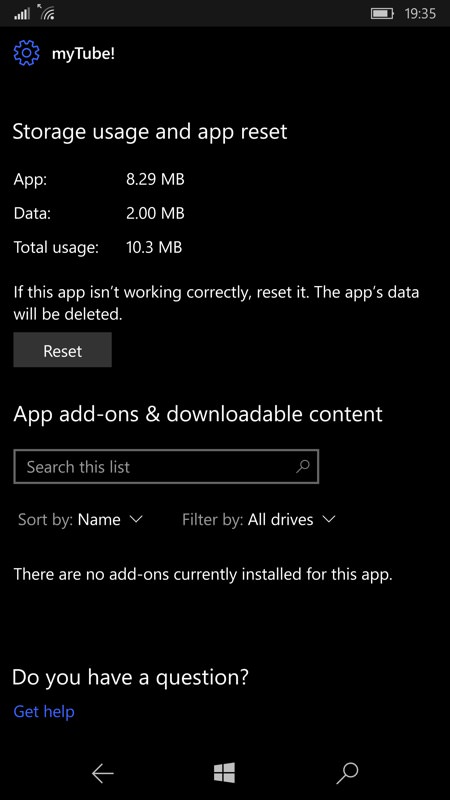 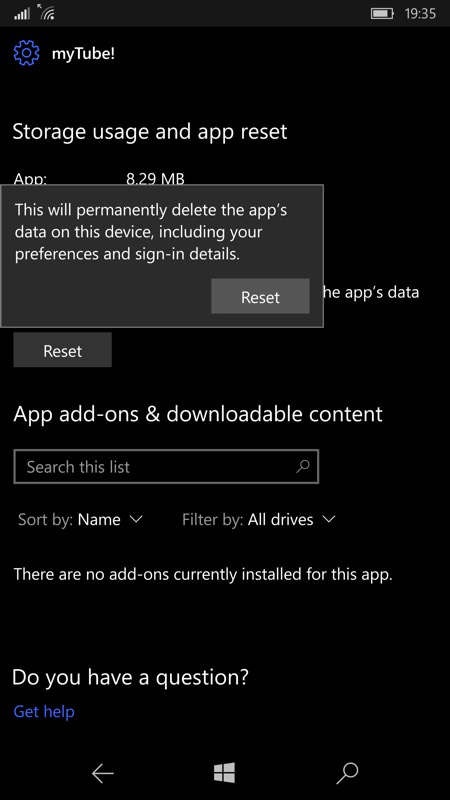 Tap on 'Reset' and then 'Reset again'. This will clear the application's data right down and get rid of any detritus from v2.x 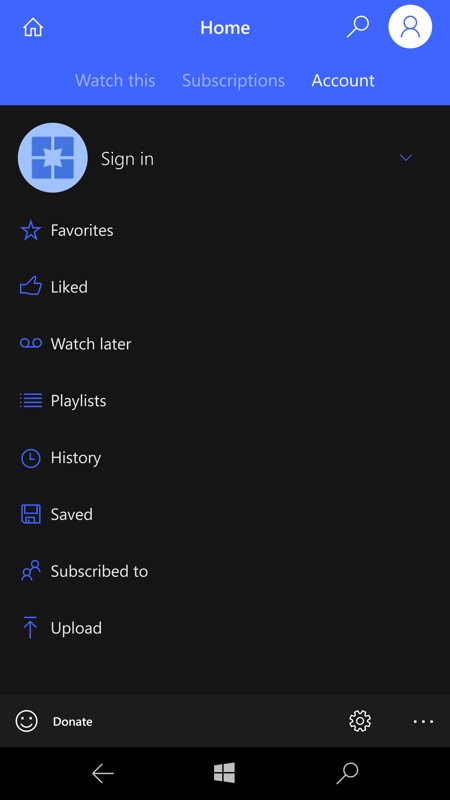 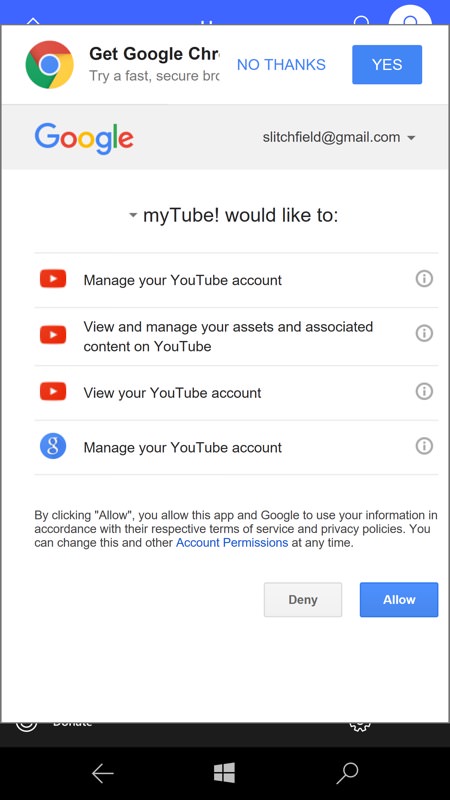 Your first port of call is to sign into your Google account, which now goes without drama thanks to the clear down just now. 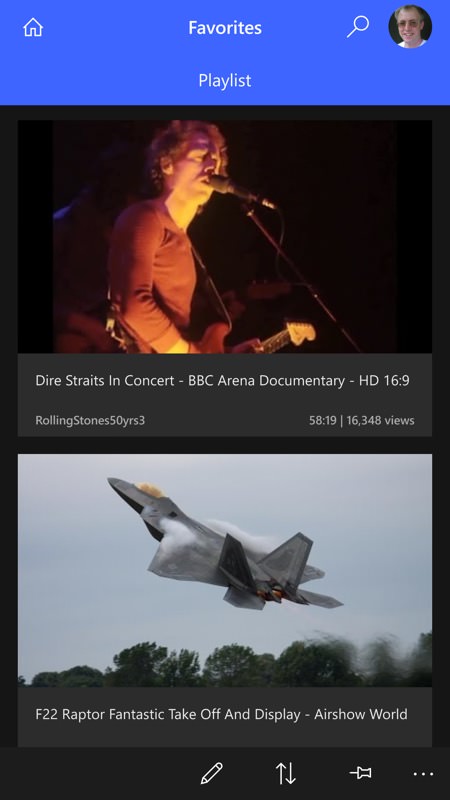 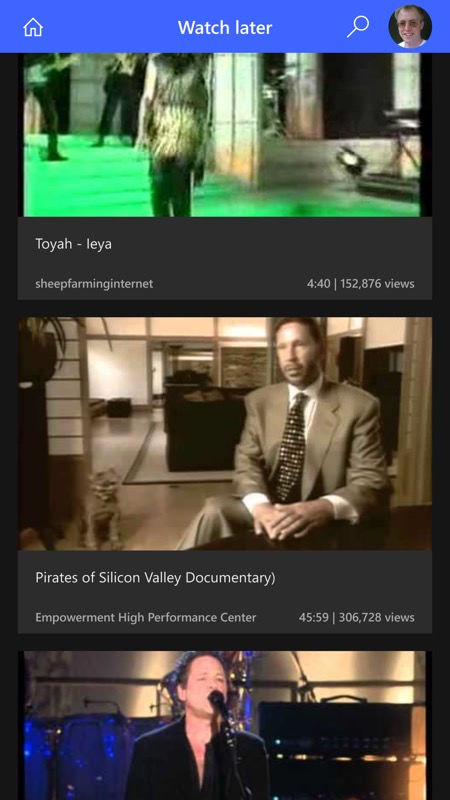 You then have access to all the YouTube goodies, here looking at a playlist and my 'Watch later' lists, each curated from YouTube sessions over the years on other devices. 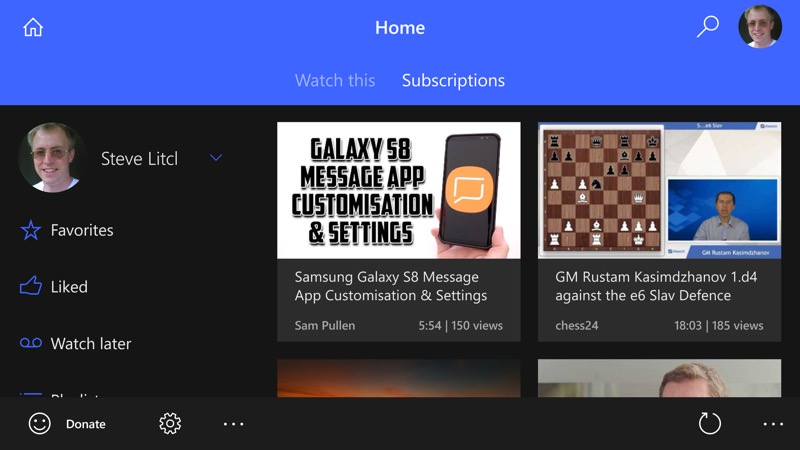 This being a next-gen UWP application, there's full landscape UI operation too, though the sheer limitations of the size of the display on a phone do have more effect than when in portrait mode. 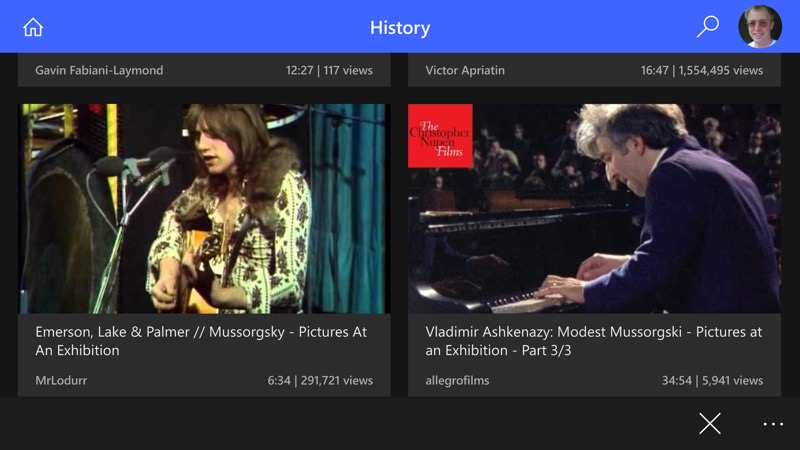 Still, there's impressive adaptation of the interface and this extends through Continuum displays of various sizes, to tablet and hybrid use, to Desktops, and more... 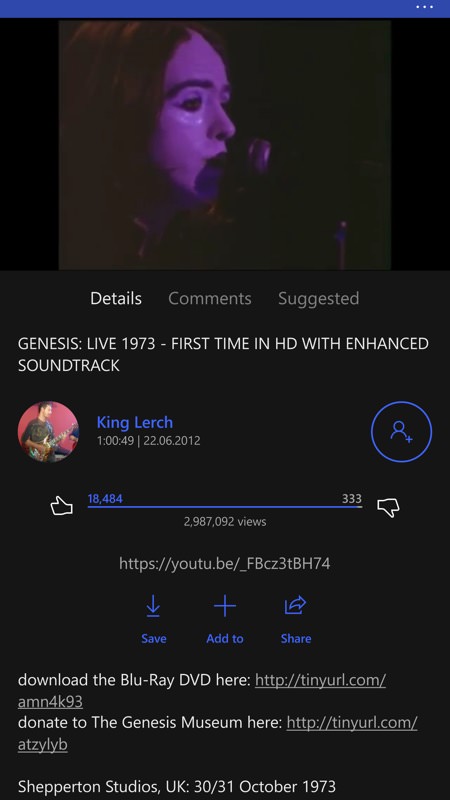 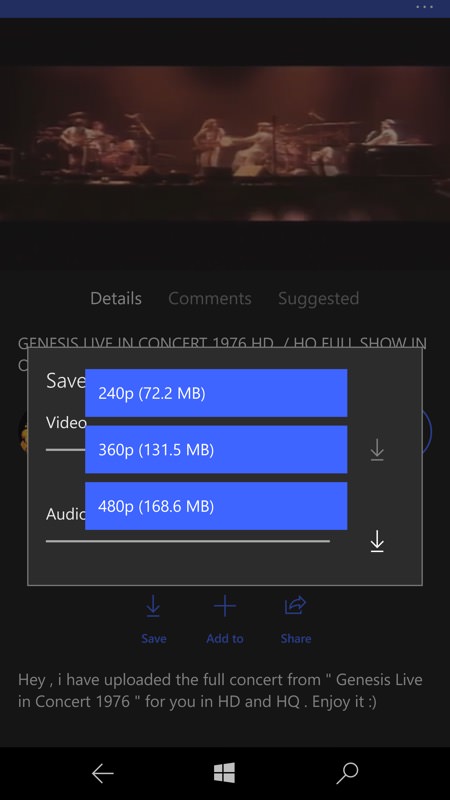 A 'save' facility is included, though this isn't a traditional 'downloader', in that the download is sandboxed for myTube! offline use only. My guess is that this is done to prevent legal issues later (downloaders are targets of Google's lawyers). 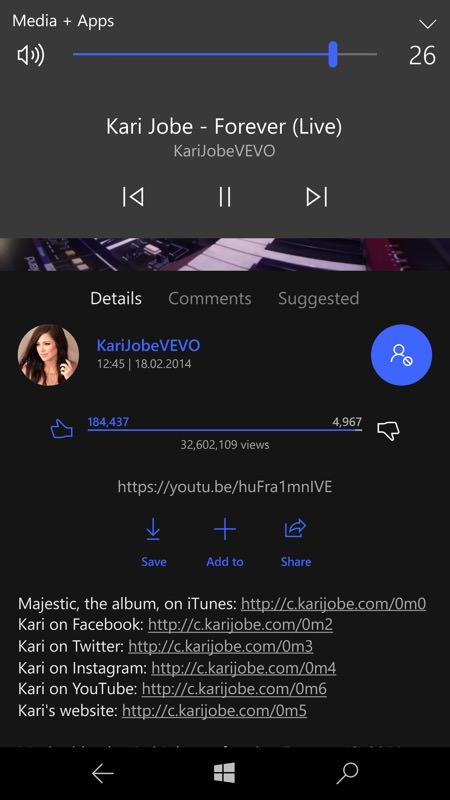 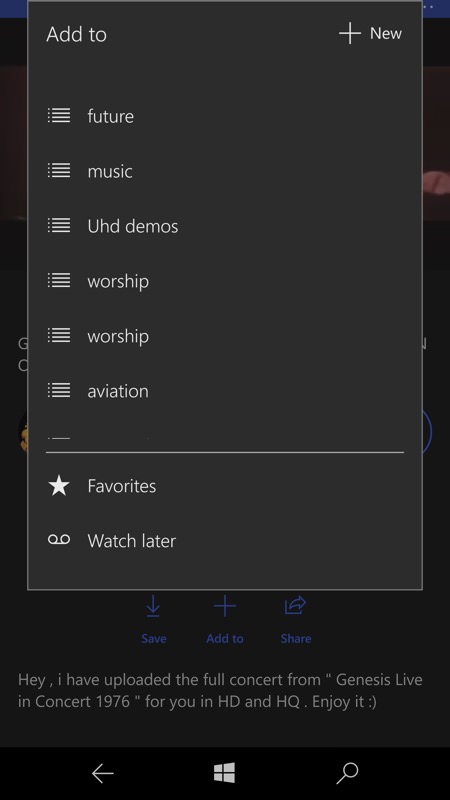 There are minor issues in terms of use on the phone. If, when you start playing a video and it's too loud or too quiet (as is usually the case), you hit the volume buttons and then have to endure the usual volume pop-up pane, but populated by the video details this time, enough to obscure the initial playing video and its controls. I don't think anything can be done about this, but the pane disappears after a few seconds, so.... (right) There's full interaction with all the usual YouTube lists and features, here adding a video to one of my playlists. 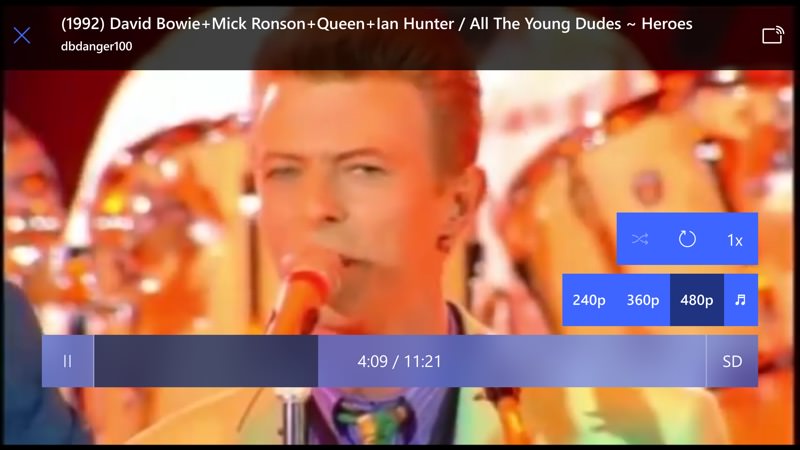 One of the most useful features - and which is now super-slick is picking the 'music-only' option from the resolution picker. This saves bandwidth, but more usefully, pushes playback to the standard Windows 10 audio channels... 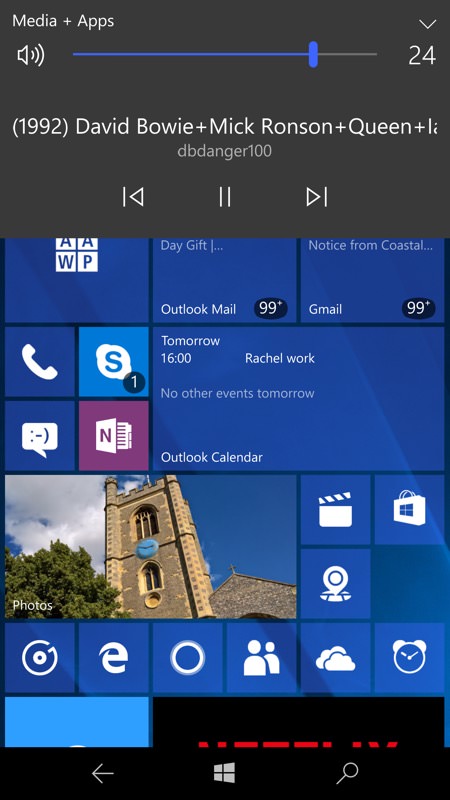 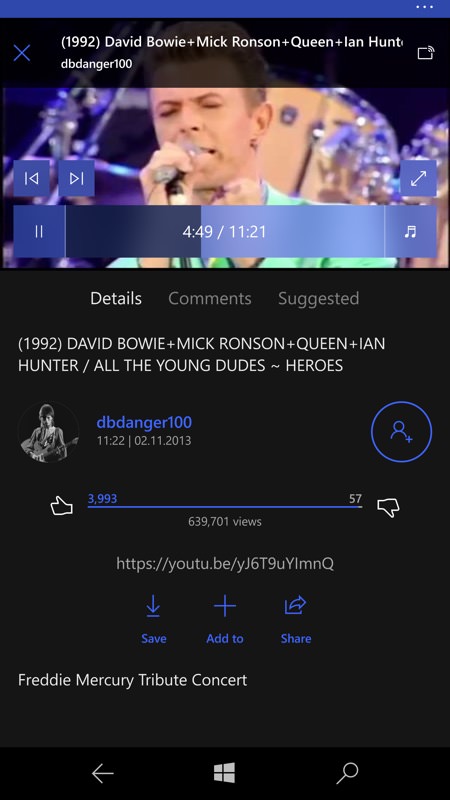 ...so that you can continue listening even when doing other things on the phone, as here; (right) when you're ready to change the music or resume video playback, head back into myTube! and tap that resolution/format control, bottom right in the playback 'frame'.

A super upgrade to a useful Windows 10 UWP application, you can buy it here in the Store (it's only a dollar or local equivalent). Yes, it's a blow to not have an official YouTube client from Google for the Windows 10 platform, but hopefully all users will find this (or one of the other top titles like Perfect Tube) quickly in the Store, making any omission somewhat moot.