As with the Alcatel IDOL 4 Pro (now sorted out), official provisioning for the Wileyfox Pro for the Fall Creators Update (Windows 10 Mobile branch 1709) had been delayed, probably for similar reasons*. Happily, the provisioning database has now been patched, to allow owners of the new Wileyfox Pro to update over the air to FCU and thus enjoy the full support period promised by Wileyfox to businesses.

* lack of test European hardware over in the USA at Microsoft's HQ. As of a few months ago though, the relevant teams have had a physical Wileyfox Pro to play with and to test against. The perils of UK and European variants with a USA company doing the software, eh?!

Yes, yes, the Wileyfox Pro is low end compared to the consumer flagships we've been used to from Microsoft (Lumia 950) and Alcatel, but hey, forgive us for highlighting a major stepping stone for this, the only (aside from clearances) currently sold mainstream Windows 10 Mobile smartphone. (Admittedly, the device just went 'sold out' this week, but there's a box to fill in to become notified when stock's back in, so...)

As shown below, Wileyfox promotes this as a 'Business to Business (B2B) Enterprise Device', with support to 'December 2019'. And anyone following my various platform charts on AAWP will realise that the end of 2019 corresponds to the support timescale for Fall Creators Update (FCU), making it somewhat unfortunate that the Wileyfox Pro's provisioning has been held back until now. 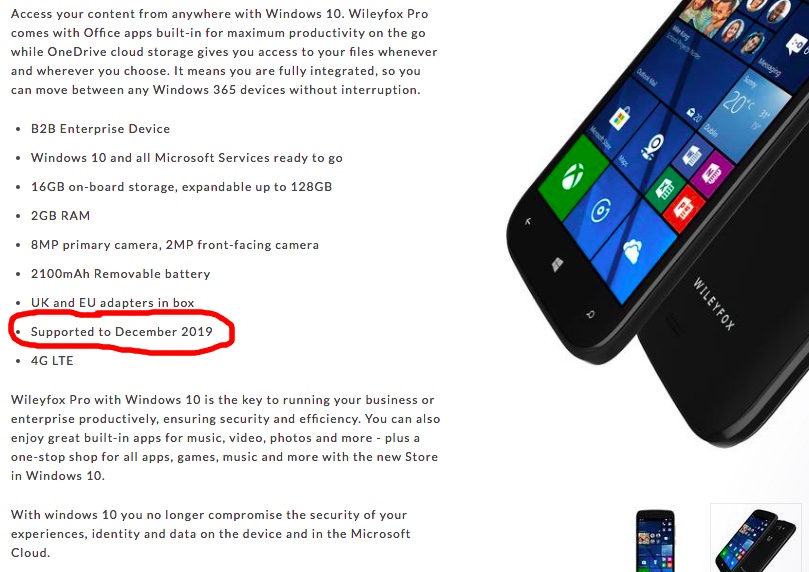 Of course, it matters not a jot in terms of urgency in the real world, since any employees handed this for company use (see my commentary elsewhere in the Wileyfox Pro review) won't be impacted at all by being on Creators Update (CU) instead. But the relevant IT managers will be comforted, at least. As will AAWP, restoring order to our tables and charts!

PS. Along similar lines, the official Windows Device Recovery Tool now offers new firmware for the Wileyfox Pro, 1078.42.88.119, containing 'configuration improvements' for EE, Vodafone and Open Market end users in Europe. Though if you have a Wileyfox Pro and it's working fine on your network, there's no reason to wipe and grab this firmware the hard way.