To help you visualise where we are in terms of the window for these monthly OS updates, here's a helpful (revised) chart: 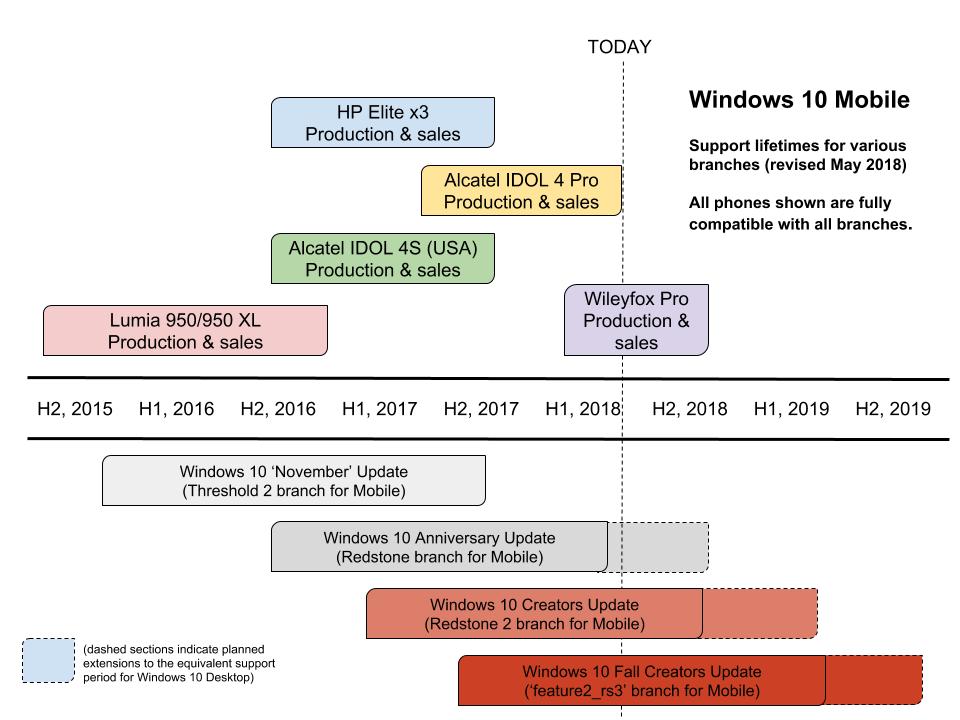 Fall Creators Update ('rs3', i.e. 'Redstone 3', at least in name) is the 'production' branch of Windows 10 Mobile, and 'Patch Tuesday' fix round-ups for it continue, with the official list for 15254.401, the '2018-05' update', mainly composed of minor fixes and security patches, at least in terms of mobile relevance.

As usual and as per the graphic above (the rectangles in a shade of red), at least one other Windows 10 Mobile branch is getting an update too, so all those older phones (Lumia 930, 830, 735, 640, etc.) finishing life on the Creators Update (if the user was smart enough to use our (ahem) hack!) aren't losing out on the core security fixes, at least.

Phones on the Creators Update should advance with this release to build 15063.1088 (from .1029)
Note that for any phones left behind on Anniversary Update (why, why? Use our hack if you're techy enough!), April's update was in theory the last ever official monthly patch/update, but it seems that the Mobile branches getting an extension of up to six months beyond the Desktop branches (presumably because the latter have a choice and they can upgrade all the way, while phones are limited by update provisioning). And I can now confirm that phones still running the 1607 branch (Anniversary Update) are being updated today to build 14393.2248 (from .2189) so it seems that the extensions are real. And I've marked them in the chart above with dashed lines.

As usual, in today's vulnerability-stricken, malware-strewn and fraudulent times, we should never disregard security fixes (e.g. to the Edge browser) though, so update today in all affected mobiles.

In each case you get the core security and component updates, though obviously without any subtleties in functionality introduced in later branches. As ever, with all phones, head into Settings/Update & Security/Phone update in order to get the update immediately.

PS. Note the effective (in terms of new builds) termination of the Insiders programme, so we're only dealing with these 'Patch Tuesday' updates from now on. Besides the lack of development of new features, Insider builds for Mobile are just not worth bothering with for Microsoft, since the changes from month to month are small enough (and common enough to Desktop) to just be tested internally.