Last mentioned here in July, Podcast Lounge 2 has completed its latest huge round of beta testing (seriously, there's a lot of effort in each major update) and is now out as an update in the Microsoft Store. Go grab it, since it offers cross-device sync of favourites, play history, playlists and settings - oh, and Xbox compatibility for the first time.

From the developer, Richard Castle, here are the overview changes for this, v1.1 of 'Podcast Lounge 2':

There's a much fuller changelog here on Richard's site.

Some screens of the new version in action: 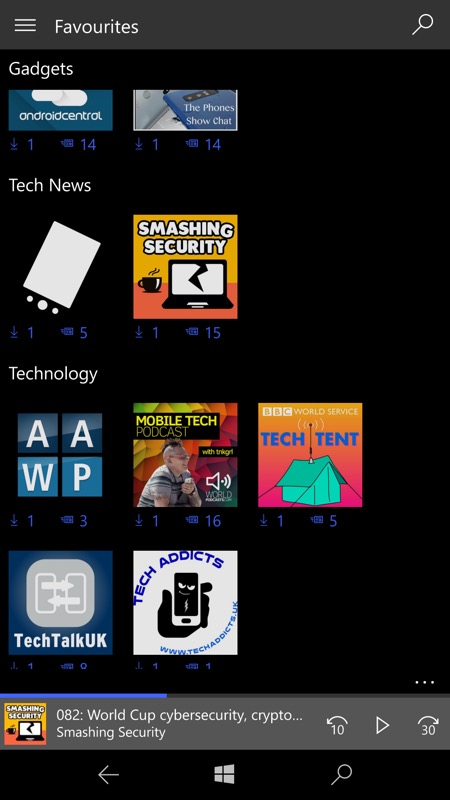 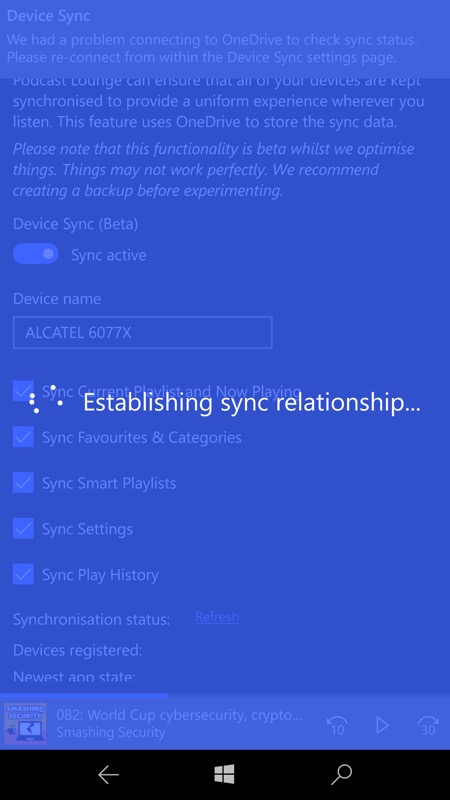 Fully configured on my IDOL 4 Pro, I head into Settings/Device Sync and sign into OneDrive... 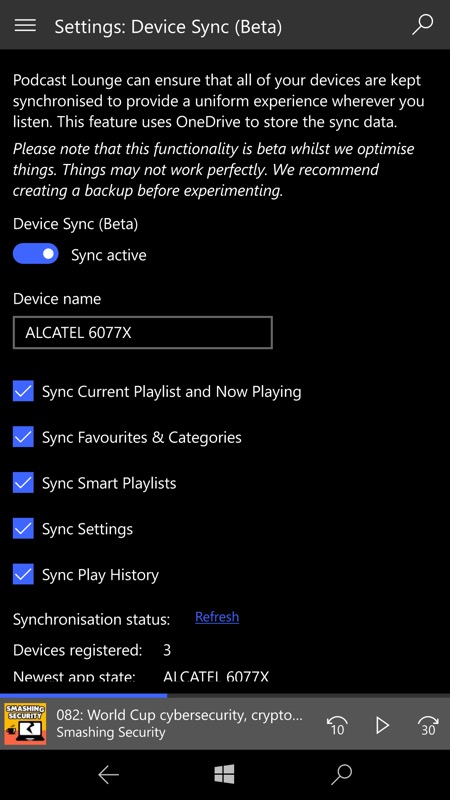 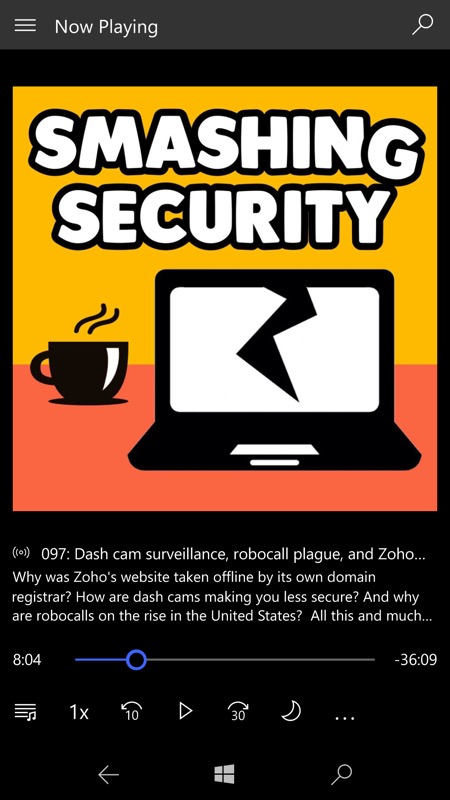 Here I can configure what gets synced (effectively everything about your current set up and progress) - there's a handy 'Refresh' control if you need to kick a sync off manually; (right) testing the sync system, here's my currently listening podcast, the excellent Smashing Security - note the playback position. 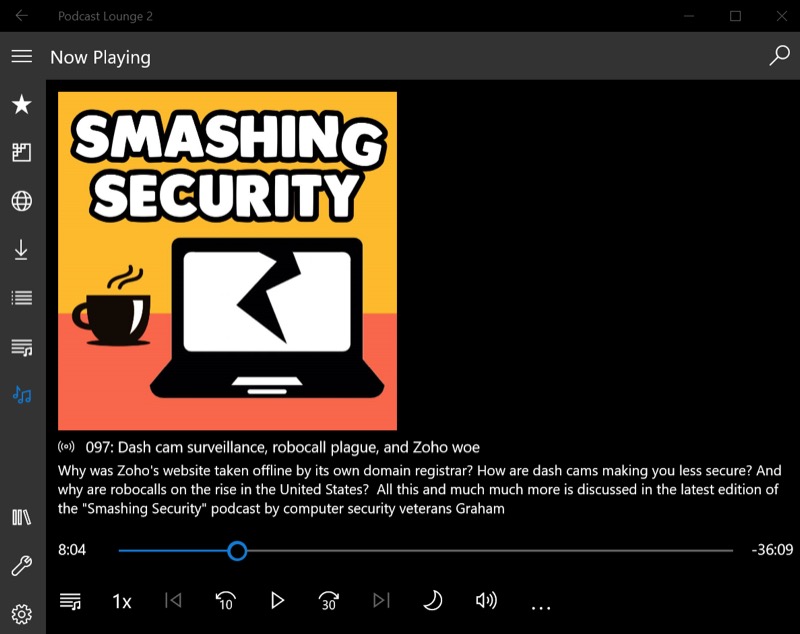 Now over on my Surface Pro, I boot up the new Podcast Lounge 2 and sign in with the same Microsoft account - hey presto, everything's as it is on the IDOL 4 Pro, including currently now playing podcast and playback position!

Other than the abortive Pocket Casts a few years ago (which promised frequent updates that utterly failed to happen), this is the first time in Windows phone history that we've had reliable cross-device podcatcher syncing - and which is why I'm highlighting it here. 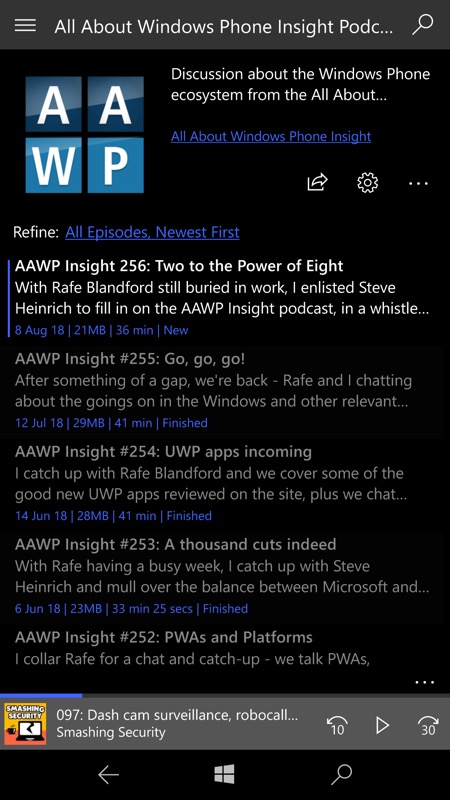 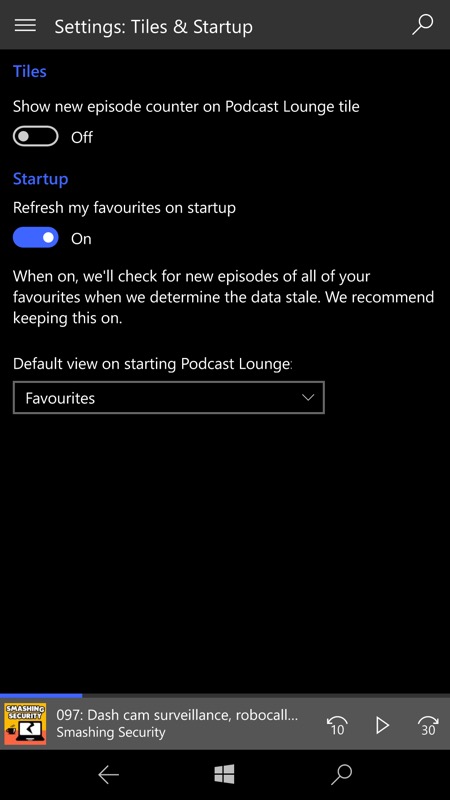 Played podcasts are now greyed out, making it more obvious what's unplayed in a podcast's listing; (right) you can now turn off the live tile episode counter, should the number get too depressing(!)

Podcast Lounge 2 is free to download from the Store as a trial, but background syncing and download functionality will stop after the 30 day free trial expires. Or just buy it outright as a commercial purchase (about £5), as I did.

It will work on Windows 10 Mobile - and via Continuum displays - on traditional Windows 10 laptops, desktops and hybrids, and - now - on XBox too (in beta).