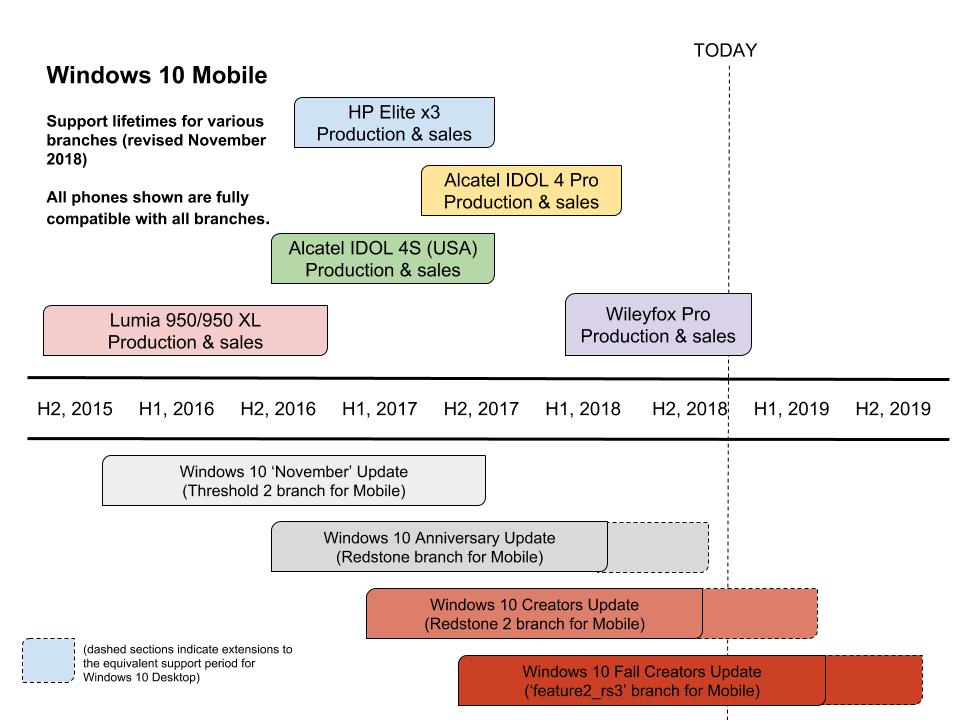 The Fall Creators Update ("FCU", 'rs3', i.e. 'Redstone 3', at least in name) is the 'production' branch of Windows 10 Mobile, and these are regular 'Patch Tuesday' fix round-ups for it, with the official list for 15254.541, the '2018-11' update' mainly composed of minor fixes and security patches, at least in terms of mobile relevance.

You'll spot from my diagram that we've now reached the end of the update schedule for phones on the Anniversary Update (AU) - meaning that anyone with one of these older phones who stayed on 'production' status will now be 'frozen' in time in terms of security. However, looking to the future, don't worry too much if your phone still runs AU (Windows 10 branch 1607) and you're not feeling confident enough to go for our hack. Although you'll not get any more OS updates, Windows 10 Mobile is a very small malware target in the grand scheme of things, so you'll be fine as you are. And you'll still get application updates, of course, possibly for years to come.

Phones on the Creators Update should advance, with this release, to build 15063.1446 (from .1390) As with the Fall Creators Update, you get the core security and component updates. As usual, in today's vulnerability-stricken, malware-strewn and fraudulent times, we should never disregard security fixes and the later the branch and security state, the better.

PS. Note the effective (in terms of new builds) termination of the Insiders programme - we've only been dealing with these 'Patch Tuesday' updates since February 2018. Besides the lack of development of new features, Insider builds for Mobile are just not worth bothering with for Microsoft, since the changes from month to month are small enough (and common enough to Desktop) to just be tested internally.