Windows 10 Mobile is now somewhat in the rear view mirror in terms of Microsoft's mobile plans, though it can be argued that its spirit will live on in terms of 'modern OS'. And the OS is still supported, whatever you might have read elsewhere. Under the hood the foundations are receiving kernel and security fixes today, for all phones currently running the 1709 and 1703 branches. Grab this June 2019 update in Settings, in the usual way. Note that this may be branch 1703's last ever kernel and security update. 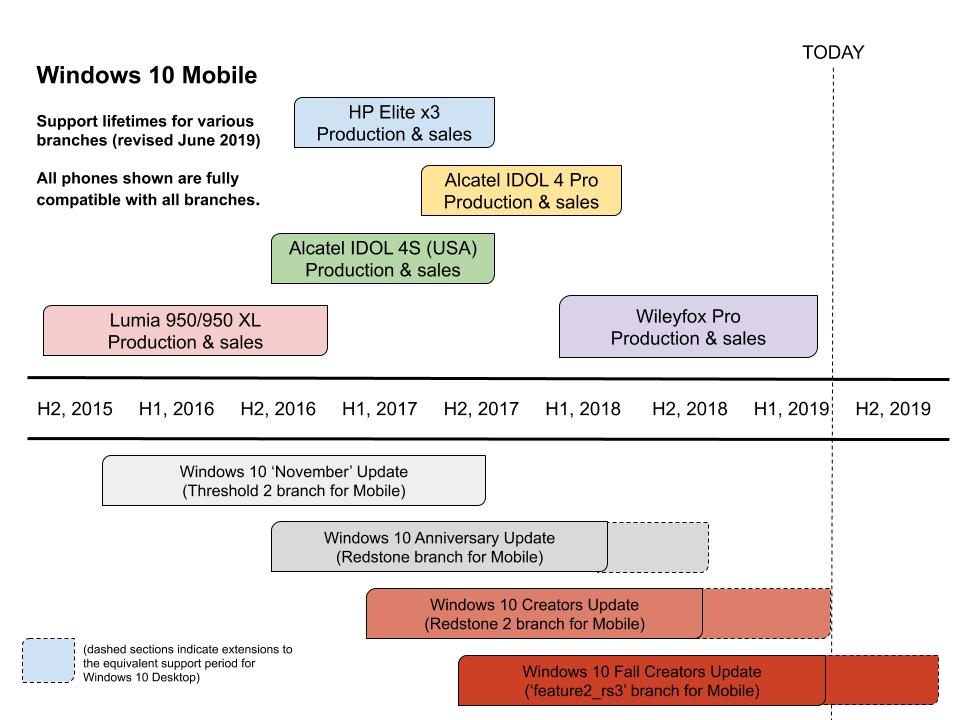 NB1: Given the issues some are having with the OS not booting properly after the update, now would be a good time to do a manual backup in 'Settings/Update & Security/Backup/More options/Back up now' - just in case!!

NB2: If your phone hangs on its manufacturer 'splash' screen after the main 'spinning gears' section of the process, for more than 10 minutes, it's safe to long press (10 secs) on the power button to do a full emergency shutdown and then power up as normal, whereupon the 'optimisation' section will hopefully resume. It's not clear why or when this all happens, but it's happened twice to me and this usually always got it going again!

NB3: As a last resort, if the 'long press power down' action doesn't work then try holding down power and 'volume down' together for 12 seconds. This is a harder reboot and worked for me when the step above didn't. Please comment if you have other advice!!

As usual and as per the graphic above (the rectangles in a shade of red), one other supported Windows 10 Mobile branch is getting an update too, so all those older phones (Lumia 930, 830, 735, 640, etc.) finishing life on the Creators Update (if the user was clued up enough to have been on the Insiders Programme for most of 2017) aren't losing out on core security fixes - for now.

You'll spot from my diagram that we have long since reached the end of the update schedule for phones on the Anniversary Update (AU) in November 2018 - meaning that anyone with one of these older phones who stayed on 'production' status will now be 'frozen' in time in terms of security. However, looking to the future, don't worry too much if your phone still runs AU (Windows 10 branch 1607) and you're not feeling confident enough to go for our hack. Although you'll not get any more OS updates, Windows 10 Mobile is a very small malware target in the grand scheme of things, so you'll be fine as you are. And you'll still get application updates, of course, possibly for years to come.

Phones on the Creators Update should advance, with this release, to build 15063.1868 (from .1805) As with the Fall Creators Update, you get the core security and component updates. As usual, in today's vulnerability-stricken, malware-strewn and fraudulent times, we should never disregard security fixes and, the later the branch and security state, the better.

In theory, the Creators Update branch has now reached its official 'End Of Support' (EOS). Which means that this is the last ever security/OS patch for it. So, going forward, updates will only be available by a little gentle hacking and 'pretending' an older device is a Lumia 950 (etc). I'll cover this in a feature here on AAWP in due course.

One good question is what will happen to all of these phones after December 2019, when the last Windows 10 Mobile branch leaves support? I'll address that in a feature before the end of the year, of course. In the meantime, see my Windows 10 Mobile service and app ready reference table.

PS. Another valid question might be what will happen to AAWP itself in 2020 and beyond? Rafe and I will chat about resources and intentions, of course, but a) do please join the occasional guest writers if you have something to say/review/discuss, and b) well, you know where my tip jar is...(!)