DSLR-like grips: Fjorden is not for a Lumia, but for iPhone

Back in the day (2013), the (Finnish) Nokia Lumia 1020 launched with the PD-95G, a grip accessory that clamped onto the back and bottom of the phone to provide a chunky DSLR-style grip. It came complete with 'pro-grade' shutter button and, interestingly, a built-in power bank (though not a very big one) to help keep the 1020 going, but the core idea was to enhance creativity by making the Lumia feel like a DSLR. And the idea just made a come back, albeit for Apple iPhones, thanks to the (Norwegian) 'Fjorden' system, just launched on Kickstarter. See the demos here, it looks superbly thought out so far, with just two caveats for me personally, of which more below.

A little context first - I still have the Lumia 1020, still fully 'working'* under Windows Phone 8.1 and I also still have the PD-95G 'Lumia 1020 Camera grip', also still holding a charge. Eight years ago I was a bit underwhelmed by the accessory, reckoning that with all the DSLR grip bulk then a higher capacity battery could have been squeezed in. I still think that, but in its defense at least it was released and was a perfect fit for our favourite camera-toting smartphone of the era.

* well, it all works as well as can be expected given that there's no app store anymore and little compatibility with modern Internet services.

I started with the yellow grip and then that got lost in the mists of time - so it got replaced by a black one, as shown below. Bit of a two-tone look, but it all still works, which isn't bad for eight year old hardware: 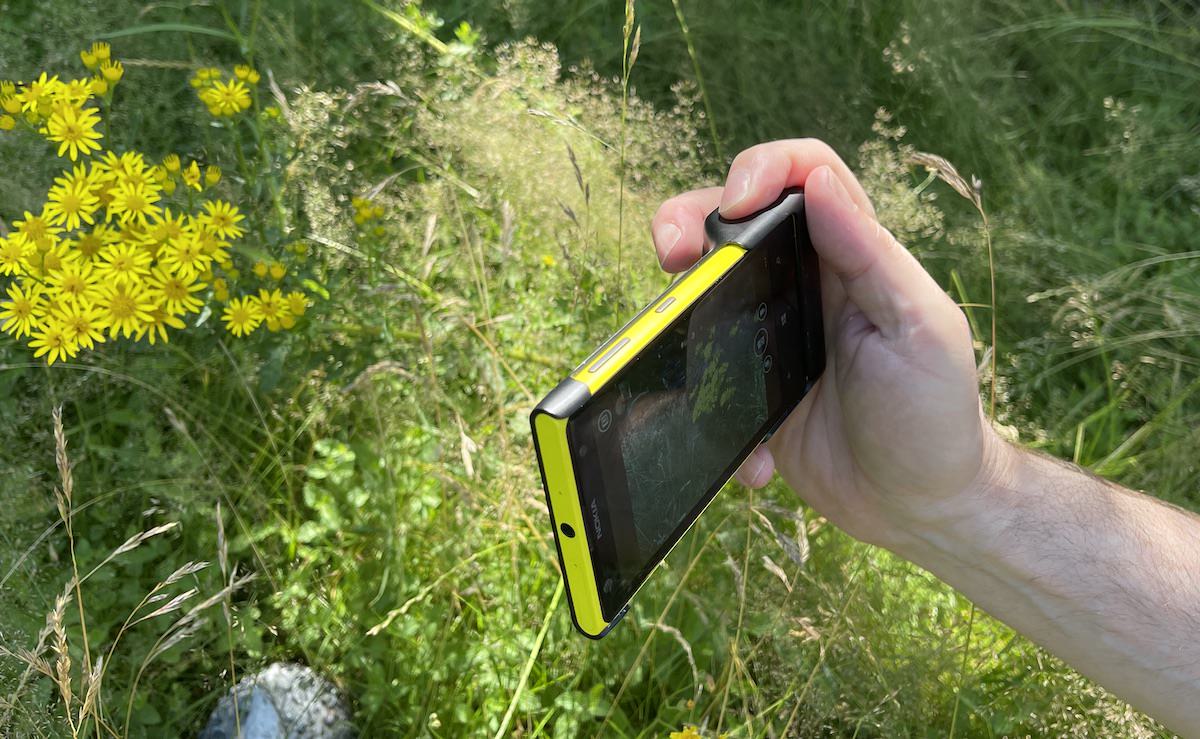 I'm completely on board with the concept here though - when your camera phone feels in the hand like a DSLR there's a definite surge in creativity. Even though the imaging hardware is identical, you'll want to take photos more and you'll feel more in the... mood.

It's all a bit nebulous, but clearly others have a similar vision today - I've watched as a few appallingly made accessories came and went in the intervening 8 years, but with the titular Fjorden we perhaps something higher quality for the modern age. Not for Lumias, of course, the world has (sadly) moved on, but for the iPhone - ostensibly for the 12 series, but with adapters to make sure it works with any iOS device in recent years.

Let's start with the Kickstarter intro video, which is pretty slick and convincing (so hide your wallet if you're easily tempted):

In short, we have a custom MagSafe-compatible* shell case with a central pivot/attachment, into which the top section of the Fjorden Grip is inserted and clipped. The rest of the grip, hinged for (e.g.) kickstand use, is dominated by a large finger grip, styled very much like the Lumia one above. In fact, you get more physical controls (though no rechargeable battery or - obviously - power bank functions), including a zoom 'lever', each transmitting user inputs via Bluetooth to custom software on the iOS phone.

* although magnets aren't involved in the Fjorden system, the idea here is that the case section will work properly with MagSafe chargers and other accessories, at least when the Fjorden grip isn't attached.

The system looks workable, though there are a few caveats and worries:

Did I back the project? I would have if they hadn't already reached their goal, but they're well funded and it will happen... in time.

In terms of value, there are - as usual with Kickstarter - plenty of tiers and funding options. Typical is the Fjorden MagSafe case and Fjorden Grip at a combined early bird price of 140 Euros (normally being aimed at 180), or roughly £120 - a third party MagSafe case is typically £30 or so, so we're talking about £90 for the plastic (but looks well made) Fjorden grip, including a friction hinge and optional kick stand function. Which... doesn't sound totally outrageous in 2021, but it's still a world away from the £45 of the original Nokia PD-95G. Just saying!

Filed: Home > News > DSLR-like grips: Fjorden is not for a Lumia, but for iPhone