With the launch of iOS 15, the promised major enhancements to Apple Maps are available to the general public for the first time. Admittedly, quite a bit is only for major cities around the world, but this will expand and you can have fun exploring your own closest capital. Or just spinning the virtual globe and having run zooming in, rotating, tilting, and so on. Below I take a lot of this for a spin on my iPhone 12 Pro Max.

[Cross-posted to AAWP because AAM is still not yet complete - many resources are still hosted on AAWP and some 'discovery' pages still don't work on AAM. Note that we'd still like you to link to the 'secure' AAM URLs where possible though, since it will help the domain in the long run.]

Explore Cities with Highly Detailed Maps - Apple Maps introduces a new way to navigate cities with a visually stunning 3D map that offers unprecedented detail for neighborhoods, commercial districts, marinas, buildings, and more. Now users can see elevation details across a city, new road labels, and hundreds of custom-designed landmarks like Coit Tower in San Francisco, Dodger Stadium in LA, the Statue of Liberty in NYC, and the Royal Albert Hall in London, with more to come. A beautiful nighttime mode with a moonlit glow activates at dusk. The city map experience is now available in London, Los Angeles, New York, and San Francisco, and later this year, it will be available in Philadelphia, San Diego, and Washington, D.C. Support for additional cities, including Montreal, Toronto, and Vancouver, will be available next year.

Battersea Power Station, currently being re-developed, here modelled in 3D; and HMS Belfast and the Tower Bridge area of London, though note that Tower Bridge itself is just a placeholder - I'm sure Apple will fix this in short order! The modelling on HMS Belfast is superb, even individual guns.

Enhanced Navigation Provides a Better Driving Experience - Maps now features even more road details to help drivers navigate through cities more easily and safely. Turn lanes, medians, bus and taxi lanes, and crosswalks are clearly displayed for navigating busy intersections, and highways with overlapping complex interchanges are rendered in a road-level 3D view, making it easier to see upcoming traffic conditions or the best lane for an approaching exit. Route planning provides the estimated time of arrival for future departures based on expected traffic. The new navigation will be available through CarPlay later this year.

The modelling of roads and their markings and crossings is now phenomenal, almost photo-realistic. Though note that these are rolling out from the aforementioned cities - this is London, obviously - your own area will take a lot longer to capture in this detail, and keep up to date!

Never Miss a Stop with Powerful Transit Updates - Maps now offers major improvements for public transit riders. Nearby stations are prominently displayed at the top of the screen, and users can pin their favorite lines in Maps so the best route is just one tap away. Once a transit route is selected, Maps will automatically notify a user when it is time to disembark as they approach their final destination, and riders can even keep track on Apple Watch. These updates build on transit features already available in Maps, including real-time transit, which provides detailed transit schedules, live departure times, arrival times, the current location of a bus or train en route, and system connections to help plan a journey. Maps also includes important real-time information like outages.

Transit instructions are superb - though obviously I can't demonstrate the real time disembarking notifications without actually doing a journey, which seems overkill just for a screenshot!

Immersive Walking Directions - With iOS 15, Apple Maps introduces step-by-step walking guidance in augmented reality. Users can simply raise their iPhone to scan buildings in the area, and Maps generates a highly accurate position to deliver detailed directions that can be viewed in the context of the real world.

This also seems to be area-dependent, so I've resorted to using Apple's promo screenshot here!

Discover Great Places with Curated Guides - Maps makes it easy to discover the amazing things to see and do in cities around the world through curated Guides created by a selection of trusted resources. In iOS 15, users can tap the Explore Guides button in Maps to access over a thousand expertly curated guides that include recommendations from respected brands such as Time Out, The Washington Post, the National Park Foundation, Complex, and The Infatuation. Curated Guides can be saved, and they are automatically updated when new places are added, so users always have the latest recommendations. Users can even create their own personal Guides of favorite places to share with friends and family.

Plenty of guides to give you travel ideas - here I'm digging down into a London guide on unusual places to visit, I'd never heard of The Old Operating Theatre Museum!

A New Interactive Globe - In iOS 15, Apple Maps offers a rich and interactive three-dimensional globe that introduces a whole new way of looking at the world. The globe shows Earth’s natural beauty with amazing textures and contours. Users can see vibrant details of mountain ranges, deserts, rainforests, oceans, and more. Now even the most remote and precious locations on the planet can be explored right from iPhone.

Zooming out to spin the entire planet, then zooming in and in, exploring terrain and so on. Yes, you can do a lot of this in Google Maps too, but it's all well integrated and implemented here.

Nokia was the first smartphone maker to buy in (and then develop) their own maps and navigation for users of their platforms, followed by Google (for Android) and then Apple here. Personal navigation is now such a ubiquitous feature in any phone that every ecosystem owner wants as much of it as possible within their own walls and not to have to rely too much on others, especially nominal competitors.

Apple uses a lot of TomTom data here, but it also has a vast trove of its own, gathered with its own LiDAR-equipped cars and its own drones. The winner is the user, of course. With free maps and navigation of extremely high quality, whether on iOS (as here) or Android.

Notably, Apple Maps doesn't have an explicit offline maps feature, so you have to rely on cached data - this works pretty well for places you've browsed before at various map zoom levels, but there's no way to pre-fetch areas that you might want to browse in the future when you have limited data signal. Nokia's Maps/HERE Maps, back in the day, let you download entire countries, while Google Maps lets you download rectangular areas, even up to entire (small) countries. With Apple Maps, it's all hidden behind the scenes, though if you're planning to go to area X then it makes sense to browse it in Maps before you set off, and at various zoom levels, to make sure it's all cached in your iPhone storage ahead of time. 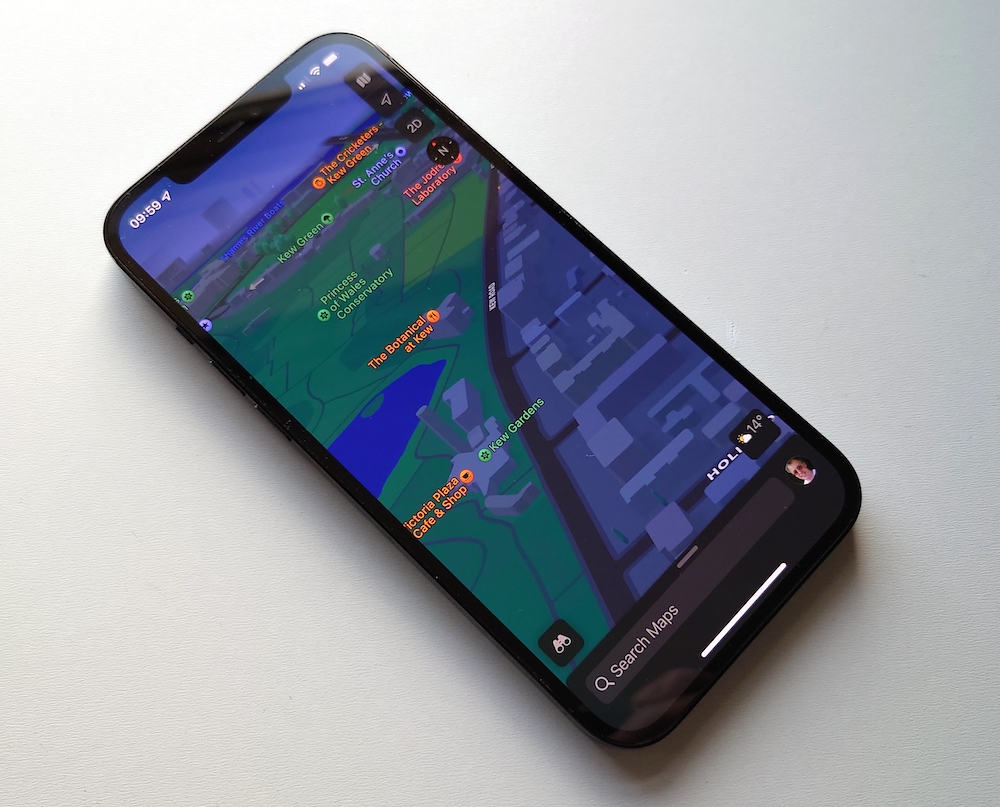