Sometimes it is really easy to label a game as in a specific genre and not look beyond that. Gravity Guy is a case in point. It's a single button arcade game (as with many such titles, tapping the screen does the action) and it's a "run as fast as you can while not getting caught and avoiding obstacles" game. But at the same time it's a platformer that needs split second accuracy to make the best of the potential jumps you can make, without having an actual jump key. And I love it.

Let's start with the basics. Gravity Guy has a secret power. Whenever he wants, he can change the direction of Gravity. Rather than being pulled down to the bottom of the screen, gravity will pull you to the top of the screen. 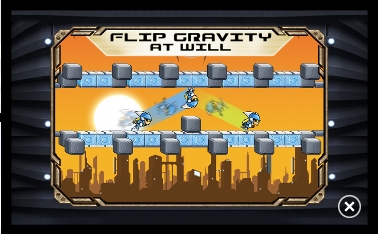 Actually it is almost whenever he wants - he can only do so when he is in contact with the ground. That means you can't employ this as a cheap way of jumping by switching gravity back around in the middle of the air. You need to make sure that when you make the switch, you're going to land on something solid. Which is where the skill comes in, because as you progress you go from nice corridors where you can always land on something, to platforms in mid air requiring switching gravity at the very end of the platform to make the next one, or a timed jump so you can slip through a gap in a vertical wall and carry on running.

Because behind you is "the protagonist", and as usual in the running game genre, don't let him catch you or it's game over. Along with missing a jump and falling to your death, being caught by the protagonist is the only way you can die. As long as you keep switching gravity well, he'll never get close, but if you run into an obstacle, you naturally stop moving forwards (until you flip gravity, fall, and start moving again). That's when he can catch up to you. 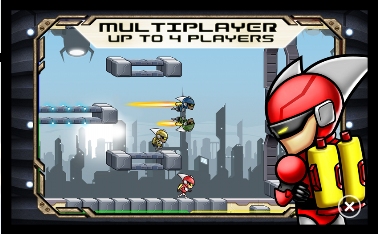 Throw in some floor mounted power-ups (such as acceleration pads which really test your reactions as you progress), tricky obstacles to navigate and the ticking clock of being chased and frustration building up and you have a great mix of ingredients that I can thoroughly recommend.

It's also great that any death in the game simply puts you back to the last checkpoint, and you start running again. No extra button pushes, no having to go via the menu, it's just straight back to the action. That also means that what could be a huge test of memory for the entire "run" becomes less of a long term exercise and more of a short term "remembering where to jump" between stages. It means that the early flow of the game through the easy runs become less prevalent and you get into stop-start rhythm as you learn how to navigate each section.

And I want to give a lot of kudos to Miniclip as well, because the presentation of this game is top notch, with a stylish menu screen and smart "how to play" screens when you begin. 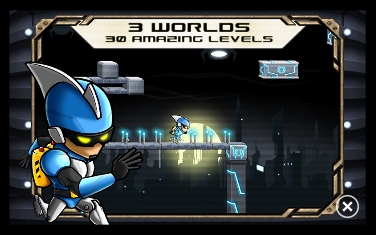 You have the option for a local multiplayer game (we'll try that when the All About team meet up in London come October), but being an Xbox Live game, it's all about the achievements. Miniclip have done well here, with a good mix of easy to reach goals. For example, pass three checkpoints without dying, or flip Gravity 1000 times, right up to the almost impossible - complete a perfect run, i.e.  all the way through the story without dying once. As well as a good learning curve while playing, they've got a good curve on the XBox Live goals as well.

In short, Gravity Guy is simple, fast, addictive, and has just enough skill to reward a good player. Definitely one to look out for.