Minesweeper is going to be an important Xbox Live title on Windows Phone. Even though it's only been available since mid August, Microsoft's other signature game has been roaring up the download charts like a sapper who's cut the wrong wire. Being free, I suspect the majority of users are going to grab this title on the strength of the price point and discover the gateway drug into Xbox Live achievements and gamer points. 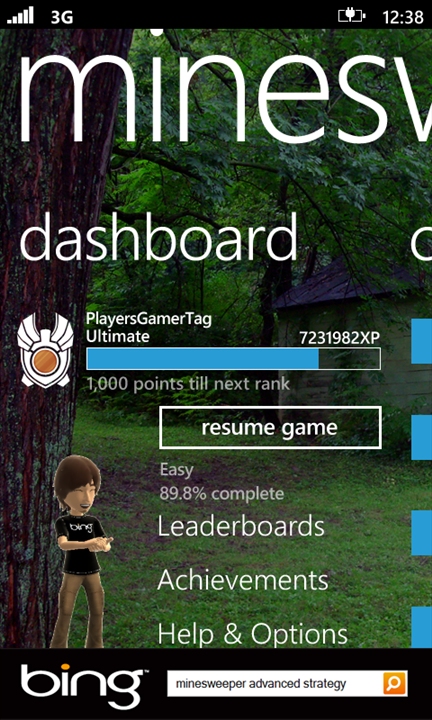 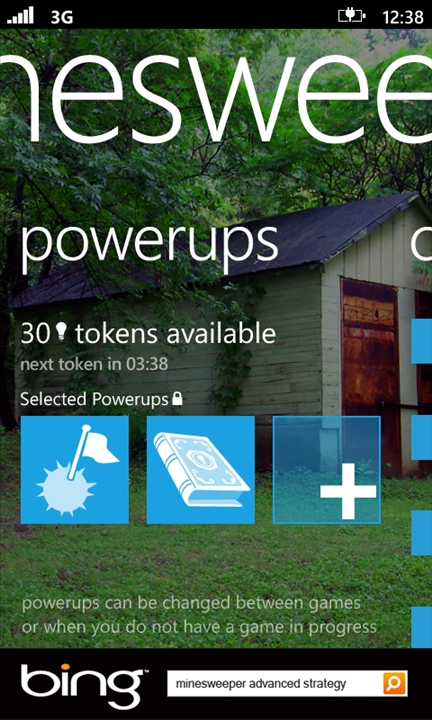 So let's start there. As a free download, the full complement of 200 gamer points (the G you see everywhere) has been scaled back to just 50, spread equally over ten achievements. That seems a fair restriction on a free title (and seems to be the Microsoft Game Studio way, as Sudoku, also released for free in the US at the same time, also offers just 50G). There's not much you can do, achievement wise, with Minesweeper, there is the expected cumulative endurance award (reach the "Ultimate" rank by earning lots of experience points), and others looking at wins on each skill level and mode, finishing quickly, and my favourite, "Click Click BOOM", which is awarded by stepping on a mine on your second turn.

Two modes are here, the first being the 'classic' version where the time counts up, and 'speed', where the timer counts down and the game automatically ends when it zeroes out. More time is awarded for clearing mines, but you'll still have 45 seconds to find 25 mines on the intermediate grid. Tight, but possible. To go along with the modes, you have different sized minefields, from 7x7 with 5 mines right up to 16x16 with 60 mines.

Finally, added to the mix to make it all shiny and new are power-ups. As time passes, you earn tokens, which can be exchanged for a special move. As you start,  these are quite simple, such as flagging one unflagged mine (15 tokens), but later on you get some pretty nice tweaks, with an EMP blast (clears and flags a 3x3 region of the map) and Detect (flags all the mine around a selected number). At best you can carry fifty tokens, so these are useful maybe once in every second or third game, but that's enough to negate those moments where Minesweeper appears to be a 50/50 guess to win - now you can use your power-ups to make this a guaranteed victory... at a cost. 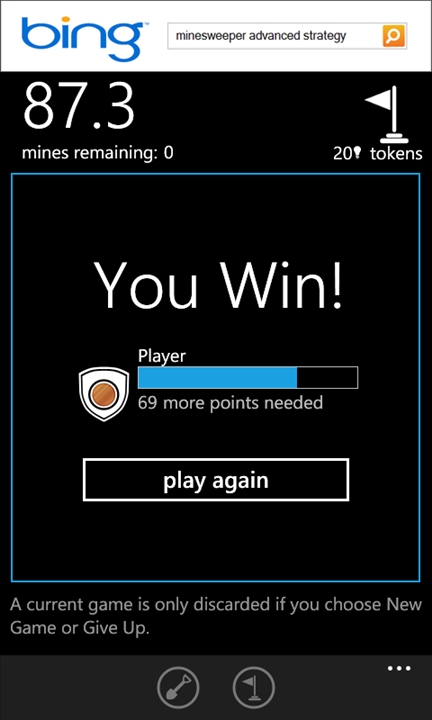 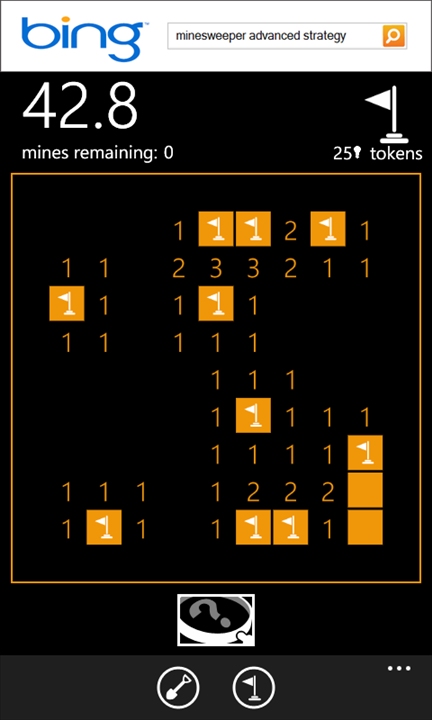 At heart, this is the Minesweeper game we all know from the desktop. Your first step is always guaranteed to be safe (thanks to some sneaky coding), and from there it's mostly about logic and clear thinking to flag up mines and dig squares to find more clues about the number of mines surrounding each square. The double tap on a number to clear the unflagged empty squares around it is present, allowing you to clear a board rapidly, and it's just as infuriating as always.

It's not perfect, the in-game text adverts feel tacked on, and if I was Microsoft I would have seriously considered making the game everyone is likely to download as clean and happy an experience as possible, rather than have a nice "look how much ad revenue a free game creates" press release in a few months time. I'd also speed up some of the code, as it seems to take a long time to generate a new board with a focus on spinning graphics rather than getting to the game.

But it is free, it does what it sets out to do, and the additions to the game make it both a pleasant extension to the Minesweeper genre and a smart introduction to the Xbox Live system for new users of Windows Phone. Congratulations Minesweeper, for continuing your subtle educational role in a new operating system. It's good to have you back.