You either know what the cryptic "PvZ" means when you search through the Window Marketplace, or you've never played Plants vs Zombies. If it's the former, then all you need to know is that the conversion for Windows Phone hasn't damaged any of the action. For everyone else with even an inch of gaming bone in their body, you want this one. Let me explain why... 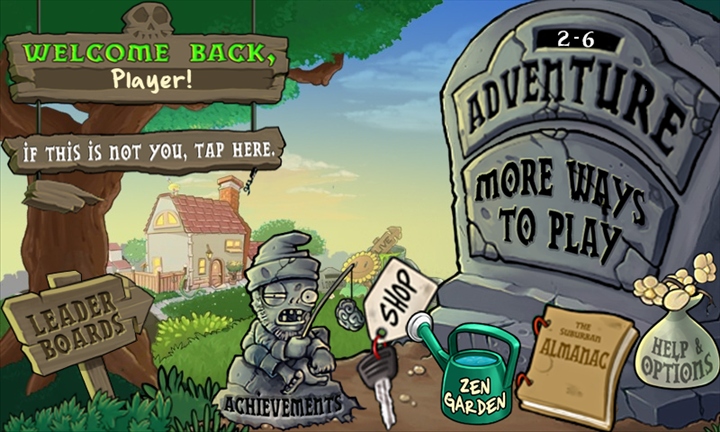 Popcap have a number of known brands in their portfolio (Bejeweled being the obvious one), but PvZ (to give it the week-day name) is destined to join them. Legendary and tested and tweaked to death before its first release in any form, it takes a comforting list of ingredients, mixes them up with a light touch, adds a dash of magic, and you have a game that, while not perfect, is good enough that I can recommend it to pretty much everyone.

Start with that B-movie plot... zombies are going to attack your back door, via your garden, and you have some deadly plants that grow within minutes that you can plant in the garden to defend yourself. Some of them act as cannons, throwing organic bullets and bombs at the undead, others slow down the attacking hordes, while others allow you to generate more sunlight.

Sunlight is the limited resource - you need this to have the energy to plant and grow your seeds to defend your home. Each game starts with very little sunlight, and you'll need to err.... plant resource-making plants, and then switch over as the attacks get underway to the offensive plants. When you make that call, and it's not an either/or moment, is one of the delights of the game. 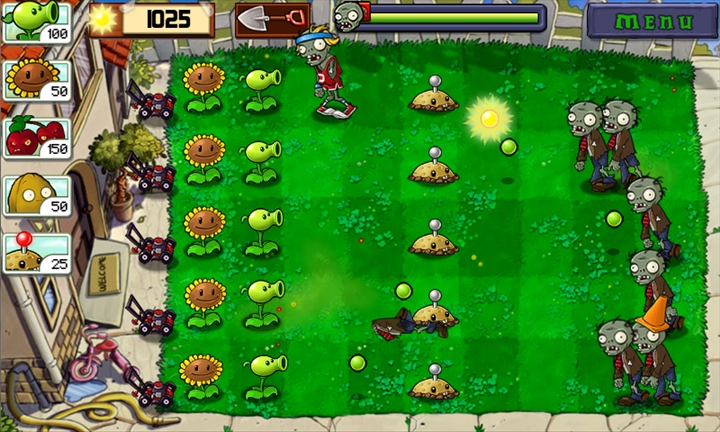 Actually, most of what appeals to me in PvZ is the fact that none of the decision points to change strategy, tactics or short-term goal focus are binary or linear - you slide between them, both reacting to circumstances and sticking to your plan. Because without planning it's almost impossible to get through the later levels. The zombie waves are relentless, be it the regular attacks or the "hordes of zombies attacking at once" that really test your battle plan.

If it all goes wrong (which it will) you have an emergency lawnmower that will clear a line of zombies. But just the once, you'll never get it back.

Like any good Tower Defence style game (and PvZ is one of these, graphics and simple map layout aside), it's all about balancing your resources, in this case the limited production of sunlight, and the time it takes between planting the first seed until you can plant a second. You can't just magic up a line of triple shooting venomous plants - that takes time, and if you haven't planned it out in advance, you're not getting that defensive line. 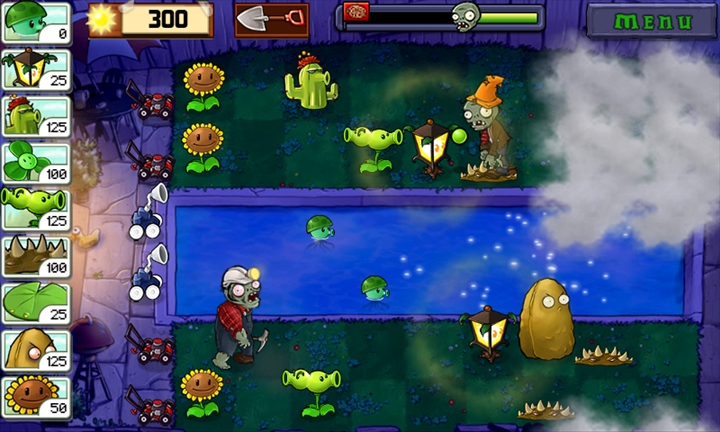 I don't think that PvZ has made any wrong decisions on their released version - having your garden as a limited number of "lanes" (just five of them, for defending and attacking) keeps the action contained and means levels are of the order of around ten minutes - perfect for mobile play. With fifty levels to work through, there's a wonderful difficulty curve both in terms of the volume of zombies attacking you, and the nature of them. Traffic cones for armour will be the second breed, but there are others - the Saturday Night Disco zombies are a particular favourite of mine, even if five of them appearing at once is a bit of a "Oh phooey" moment.

Mix in different conditions (where do you get sunshine in the dead of night), the occasional arcade like level with your crazy neighbour feeding you pre-grown plants you can just plant, front gardens, back gardens, roof attacks, you're not going to get bored from similarity. Every level has its differences - and with different tactics, the same level can play completely differently. You can only have a certain number of varieties of seeds, so choosing the right weapon load out at the start of a level is vital.

The XBox Live achievements on offer are a good mix, and many of them are long terms goals. You aren't going to clear 50g in your first night's play of PvZ, you'll need to work on it for a while. Neither are there any really stupid ideas just for the sake of 5g (while 'win a level after using the lawnmowers on each lane' seems a simple one to organise at the start, this is a needed tactic on some later levels when you can't get enough plants down).

PvZ is very much a touch-based game, because you're not doing that much. You wait, you choose plant seeds, and you touch where you plant them. And some menu choices. So touch suits it perfectly, and while you might not have much to do, when the action starts your pulse is going to race. Quick reactions aren't the key to victory, a level head is. Although that's easier said than done. 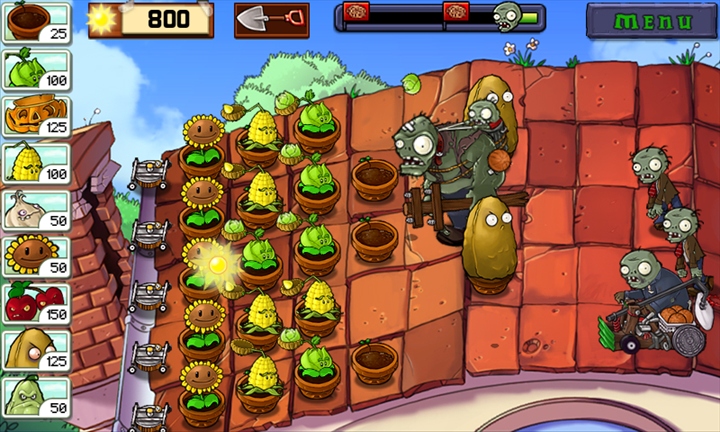 Sometimes you get lucky and everything lines up in a game. Where it all clicks and it's got the sweet spot in every area of gameplay. This is one of those games. Yes, Plants vs Zombies is already a big hit on a number of other systems (it's even in our list of games that every platform needs), but it has a huge amount of replayability for existing players (especially with the Xbox Live Achievements added), and for new players there are weeks of game play in here as you learn just how evil the zombies can be.