Smartphone loudspeakers are a mixed bunch, many are good enough while some make us wonder why manufacturers bothered to fit them in the first place. If you like to use your phone as a boombox, external speakers are definitely the way to go. However, some of them are so bulky or elaborate that they rather defeat the object of using a converged device. The XMI X-Mini II mini speakers might just offer a compromise of compactness versus quality and power. Read on for our review and photos.

I’d like to thank Mobile Fun for supplying me with a pair of these speakers to review. 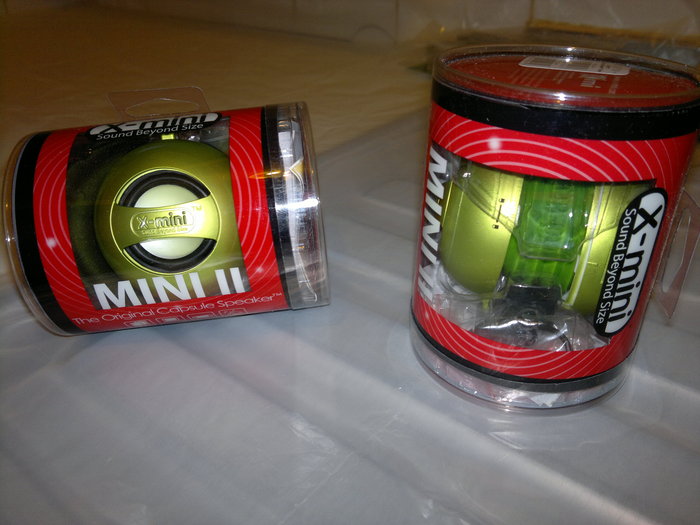 The XMI X-Mini II Mini Speaker in its packaging

The X-Mini II is a self-powered speaker, which means it can pump out far more decibels than your phone’s loudspeaker. It has a tiny 340mAh battery, but because it’s only driving a small speaker, it lasts for days of moderate use. In fact, during the weeks I’ve been testing, I’ve never had one run out of power, and it only takes a couple of hours to recharge. However, there is an on/off switch and a very bright LED indicator to remind you that it is switched on. 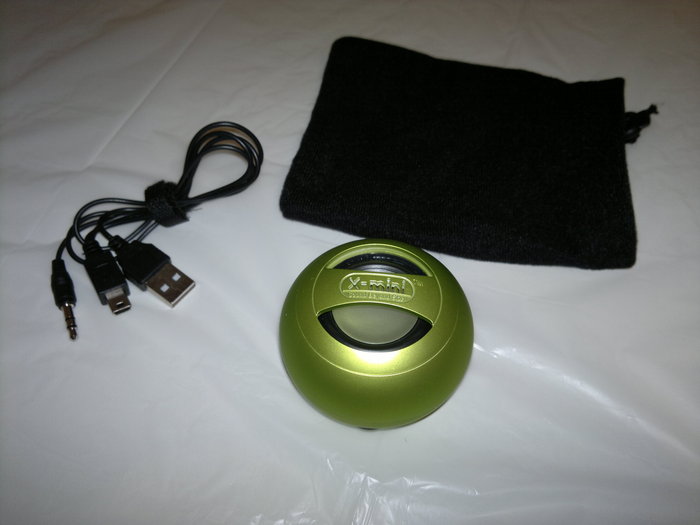 The X-Mini II comes with a combined charging and audio cable, and a felt pouch

The speaker is charged via its miniUSB socket; it’s a shame it wasn’t microUSB though, then it would have fitted standard phone chargers. A cable is supplied with a male type A USB connector and 3.5mm headphone jack, both are wired into a miniUSB plug. The X-Mini II can take both power and audio input through its USB socket. This means it can be continually run on external power when used with a laptop. The LED indicator displays red while charging, and changes back to blue when it’s fully charged.

Note that this is NOT a USB audio device. XMI have just connected the USB data pins to the analogue input of the speaker. 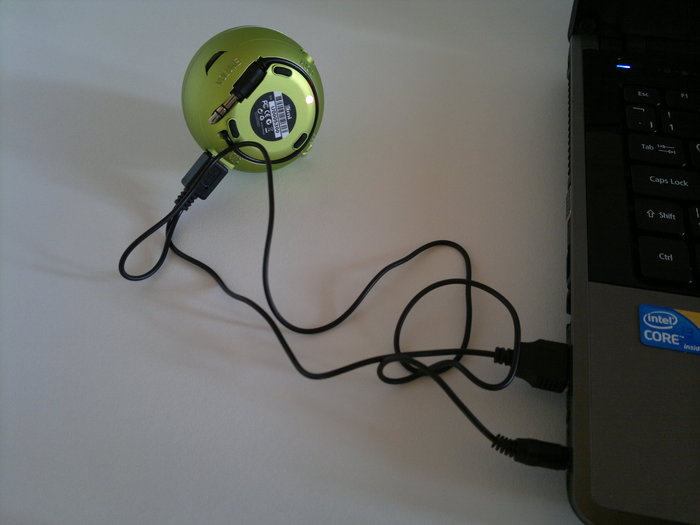 The speaker has a self-contained 3 inch cable with 3.5mm audio jack. Being able to simply pop out an attached cable and plug into a phone’s headphone socket is much less hassle and battery draining than setting up a Bluetooth speaker.

The X-Mini II’s secret weapon is its bass output. If you keep the speaker closed, its quality isn’t much better than a laptop speaker, but is much louder. However, if you twist the speaker open, its bass cavity will expand. It’s actually just a concertinaed plastic tube, but its size is just right to let the bass frequencies resonate, creating a much heavier booming sound. In fact, these speakers pump out such powerful bass, that they can bounce themselves around! 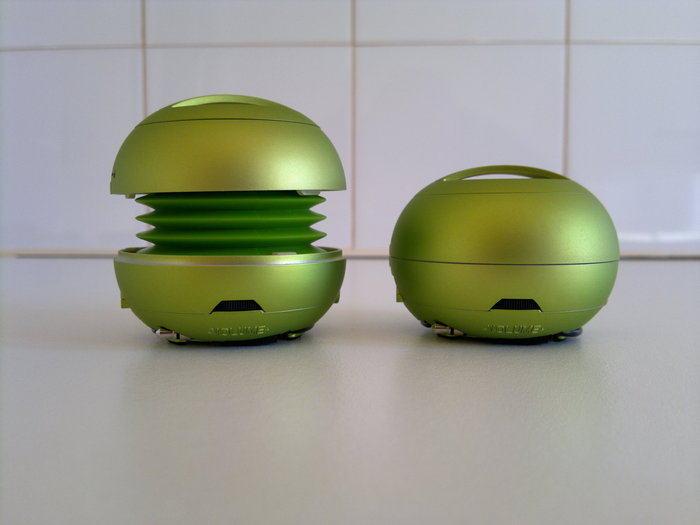 The X-Mini II, open and closed

Each speaker has a 3.5mm output socket too. So if one speaker isn’t enough, you can daisy chain as many as you like. I was hoping that this would have been done intelligently so that stereo channels would be divided between each speaker, that was not the case though. 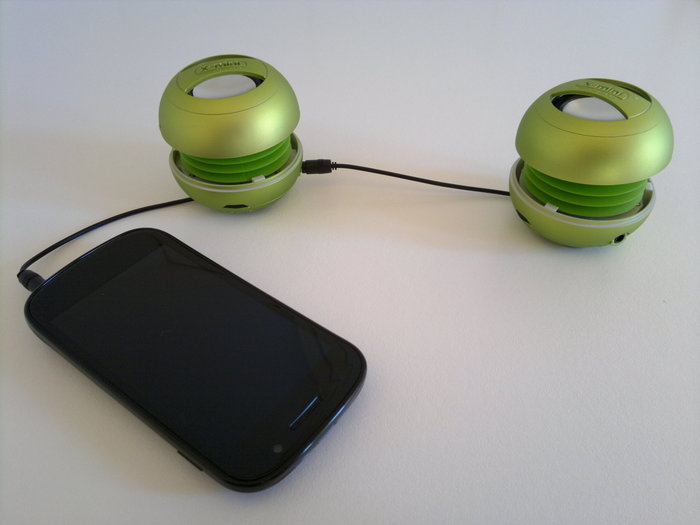 However, if you absolutely have to create a stereo system out of your smartphone, you’ll have to buy two Xmini-II’s; then, buy a stereo to mono splitter (such as this). Plug the splitter into your headphone socket, then connect one speaker to each of the outputs, and then you can enjoy booming stereo! 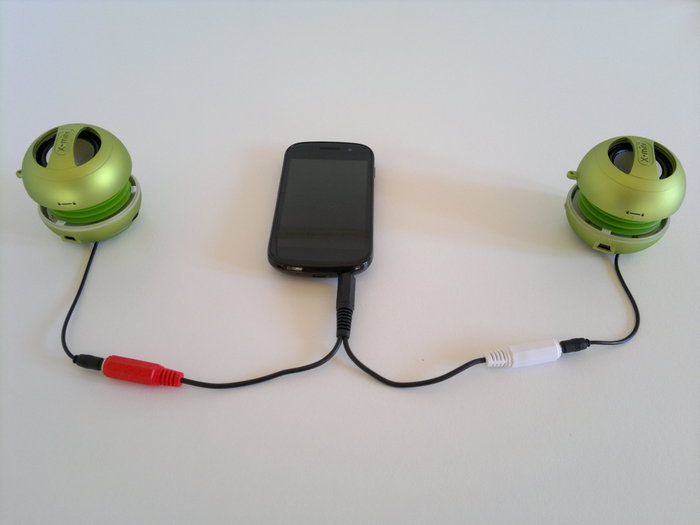 Setting up for stereo sound

A side benefit of these bass heavy speakers is for people who have hearing difficulties, such as Meniere’s disease. Listening to any sort of vocal content on a mobile device (e.g. podcasts) is difficult for people whose hearing has a poor response to high frequencies. The X-Mini II really brings out the lower frequencies, making voices much more well defined. This is based on tests with a member of my family who suffers from Meniere’s. 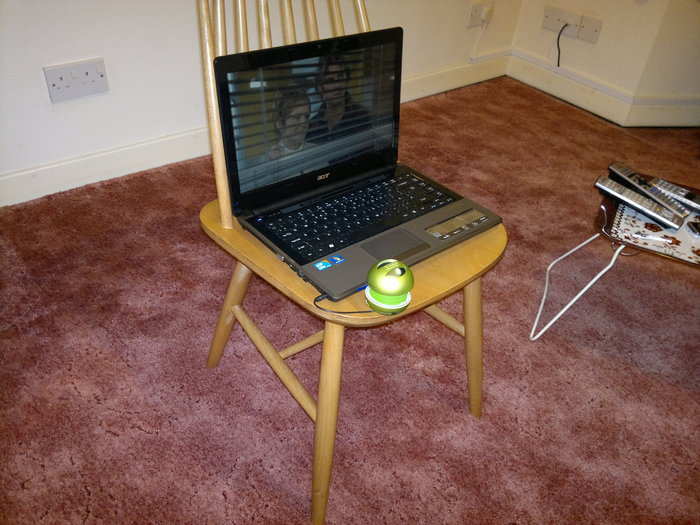 Works great with a laptop for catching up on TV

If you are just looking for a small amplified speaker to complement your smartphone or laptop, then one of these speakers will serve you well. In terms of improving sound quality from tinny built-in speakers, then there isn’t a great benefit in daisy-chaining a second. However, if you want to go crazy (like me) and rig up a mobile stereo system, then two work very well.

David Gilson for All About Symbian, 07 October 2011