Here's a great idea - take the basic Bing Maps and hijack them for calculating taxi journeys and estimating that ever-present worry about what a taxi will cost from A to B. It's only for Great Britain and I did note a pretty big caveat, but the amounts calculated to seem reasonable, based on real world fares. TaxiRoute GB is produced with polish and is certainly worth a 'trial' download. 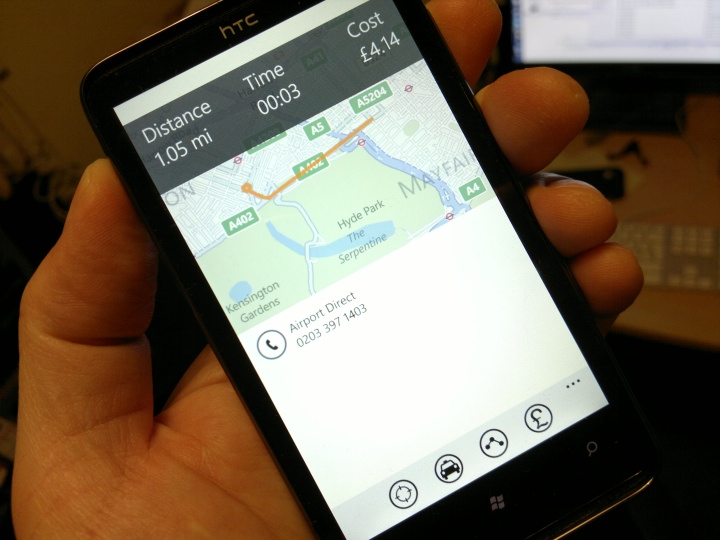 In theory, with data from "official Local Authority Hackney Tariffs from around Wales, England and Scotland", TaxiRoute GB should produce pretty accurate data. The idea is to give the application start and finish points, any of which can be predefined favourites (e.g. "Mums") and the optimum route will be calculated and then looked up according to the aforementioned tariffs, essentially a different 'fudge factor' for each region and town, I suspect.

From the wizard-like opening screen to the list of favourite places and recent routes calculated, TaxiRoute GB's interface is worth admiring at each stage. 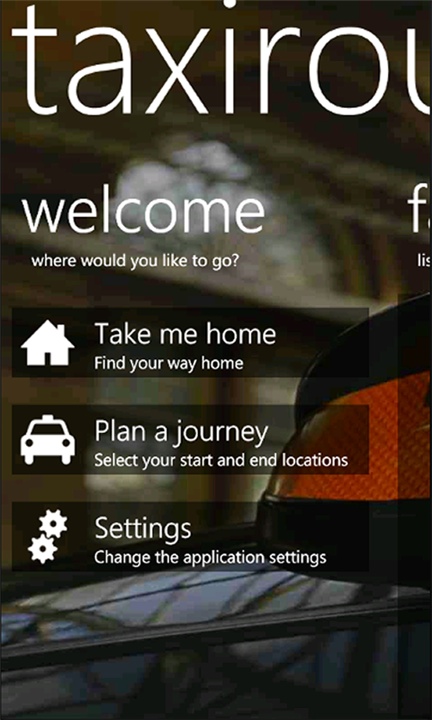 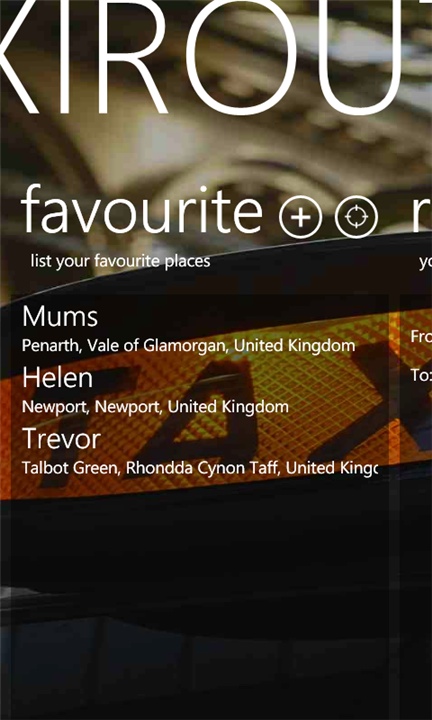 It's standard Windows Phone dialogs all the way from there and they tie neatly into the Bing Maps API - havng to press (virtual) Enter after typing a few search characters feels a bit odd, but you get used to it.

I liked being able to set a destination as 'Home' and then use the 'Take me home' front screen option. At any point you can use your current location as a Start point, as determined by GPS, network and Wi-fi positioning.

Having calculated the best route, the distance and road speeds (presumably determined by road type rather than actual average traffic speed) are taken into account to produce a journey time. This is then multiplied up and a cost produced. In practice, the times seem a bit optimistic in urban environments - but then common sense will tell you that a taxi journey taken in rush hour is going to cost more! 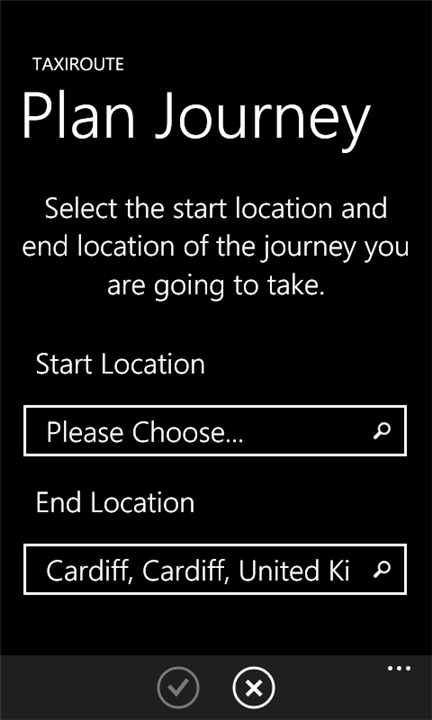 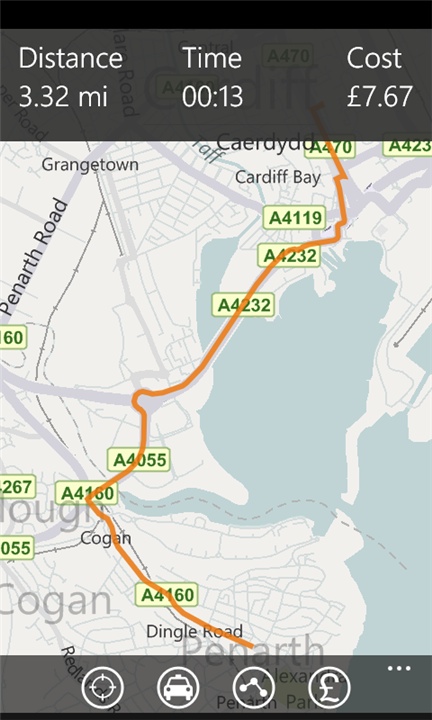 The toolbar at the bottom gives extra functions - being able to see local taxi companies that might be able to offer this route and approximate cost, plus guidance on how much the fare might go up at different times of day: 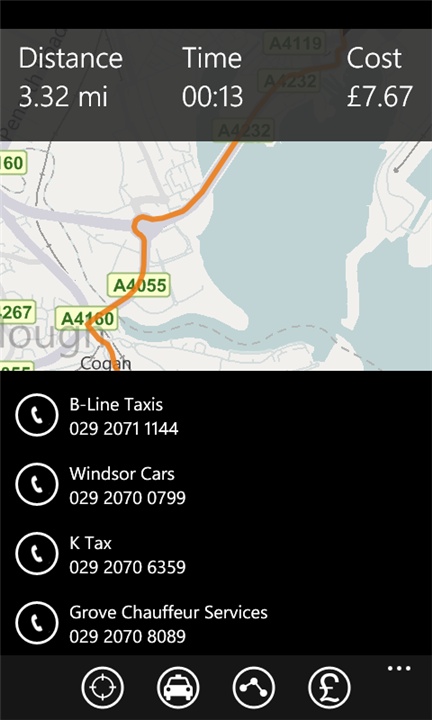 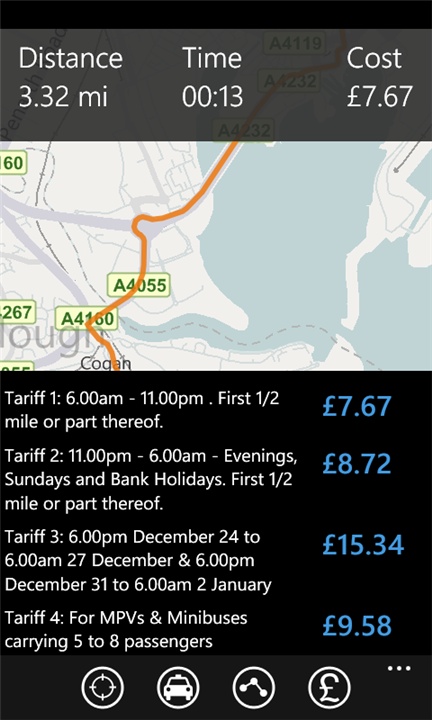 All of which is fine and dandy and generally works well to give most taxi fares under ideal traffic circumstances, at least to within 20% or so. However, there's a worrying clause in the application blurb: "a list of locally subscribed taxi companies". It seems that taxi companies have to opt into the TaxiRoute GB's database, meaning that it's very poorly stocked, even six months after the application's release. For most test journeys I tried, just one taxi company was offered, usually the same one.

All excellent business for this one company, but I felt a bit shortchanged. Given that TaxiRoute GB is a paid-for, commercial application, I'd have liked to have seen more effort by the developer in getting far, far more taxi companies onboard.

In addition, and not surprising given the application's release date, TaxiRoute GB doesn't support the 'multitasking' in Windows Phone Mango - so if you do switch away from the app you have to wait while it starts yet again. A recompile definitely needed here.

A good version '1' then (actually v1.3) and at least you can try TaxiRoute GB in your own area, since the 'trial' version allows up to 20 searches before it stops working. For the occasional taxi-rider, this may even be enough for a year or so - hardened taxi-riders will want to either pony up for the full version or will have become used to taxi rates by now.