Let's blow stuff up! How many games have that as their principal goal? And how many of those games are fun to play? Exactly - we need a constant supply of digital things to blow up. With Implode, you can be a little boom-happy in the safety of your Windows Phone. 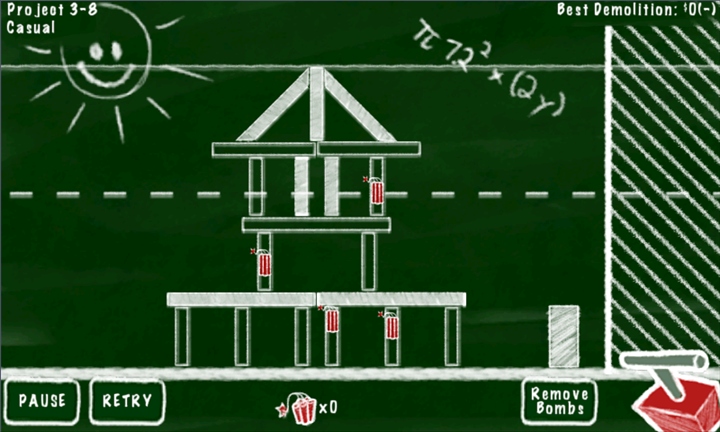 This is a very surgical game. Imagine a Jenga set (bear with me) and a creative sibling who has built forts, houses, bridges, and the word "Bum", out of the blocks. And those blocks are twenty feet long. All you have to do, being the destructive one in the family, is to knock the structure down.

To aid you and your explosive tendencies, you have a knapsack with some sticks of dynamite, and the ability to place them anywhere on the structure. Retire to a safe distance (err, move your tapping finger over to the big red button), and set off the dynamite.

If you've been successful, the structure will collapse, the rubble left over will be under the "safe" line and you get to move on to the next level (after being given an A-F letter grading on efficiency, height, and sticks of dynamite not used). It's not all Nitro-9 though. While early levels are balanced like a house of cards, later constructions will need you to blow out certain Jenga blocks and let the weight of the blocks above the new gap pull down the structure in one of the most graceful applications of physics I've seen in a game since the original Atari arcade implementation of Asteroids. 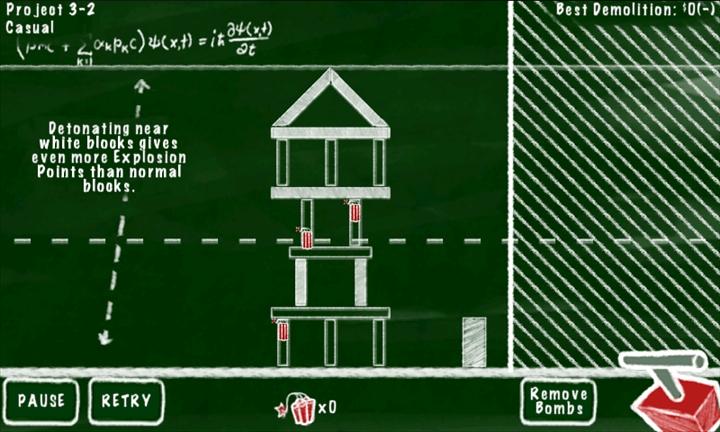 As you go through the game, you'll find new challenges to keep it fresh - the "dead" zone at the side of the gameplay area, where no block may enter makes it even more fun and complicated, while differing sizes of dynamite sticks can make bigger explosions when you need them. It's not quite enough to stop the game feeling a bit same-y, so I don't think people will finish this in one session, rather it's one to dip in and out of over a longer period.

And once you get through the hundred odd levels, there are two thing to keep you coming back. The first is the aforementioned grading system. It's fine to clear the level, but part of Implode's appeal to me is that you can be graceful and do something with style and beauty. And the more you do this, such as demolish a whole structure with one tiny dynamite stick, the more likely your grade letter will be better. And I do want to see a field of "A"s. You've also got the option to be your sister and build your own levels for others to take out, which I suspect is going to be the sort of thing a close group of friends are going to latch on to. For me it's a bit gimmicky, but it's nice to have it, and helps Implode feel like a game that the developers loved, rather than just turned around for a deadline.

There are no surprises with the Gamer points, they're going to be earned as you work through the levels. What might cause issues in gaining the full 200G is the requirement to get a huge number of "A" grades to get the final achievements and your full quota. Still, I prefer this, with a mix of easy, medium, and difficult achievements to get from within a title.

Implode is a classy title. Not only is it a simple idea, but it's one that is easy to understand and has a lot of complex actions behind it. The physics, coupled with the powerful graphics on the Windows Phone devices, are smoothly rendered, it all feels as realistic as line drawings can be, and it's going to be keeping me amused for a long time. I think it can do the same for you as well.