It's not Farmville, but Aalawar's Farm Frenzy 2 (a sequel to Farm Frenzy, which is naturally not available for Windows Phone) is almost as addictive, but without the overpowering sense of exploiting your online friends for more credits to do stuff. The cute farm graphics are there, but this is more a mix of arcade reactions and quick decisions to reach your goals than the careful planning and long waits of Farmville.

This is a level based game where you'll be handed a goal to achieve to pass each level. This could be to raise a certain amount of money, to manufacture certain produce, to have a certain number of animals, or more likely a mix of all three! To add to the fun, you could simply clear a level, but to get extra stars, you'll need to beat the 'Silver' or 'Gold' times. 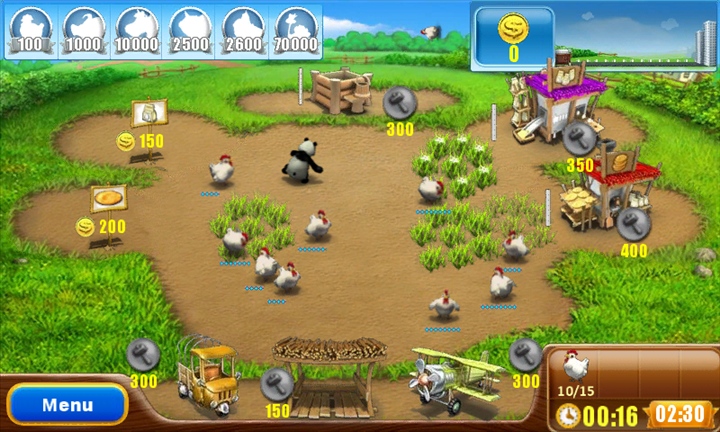 That equipment is vital - without it you can't take your eggs and make powdered eggs, which you need to make bread products, and so on. Do you sell eggs  now, or spend time going for a cake that sells for a lot more (comparatively) but needs a lot of time - time you might not have if you are aiming for a gold star on the level.

It all boils down to resource management, and with limits of three to five minutes per level, time is the biggest resource you don't have, so everything has to be measured against that. And did I mention the bears that fall into the screen, grabbing your animals and running away with them? You'll need to tap fast to cage and capture them.

Because the other wonderful thing about Farm Frenzy is that it is all tap based - from the rapid tapping to build a bear cage, to single taps on empty ground to water and grow grass for the chickens to eat and lay eggs, which you tap to pick up, if you want them to go into your egg factory (assuming you were given it at the start of the level, or subsequently bought it... by tapping the highlighted area of the screen). 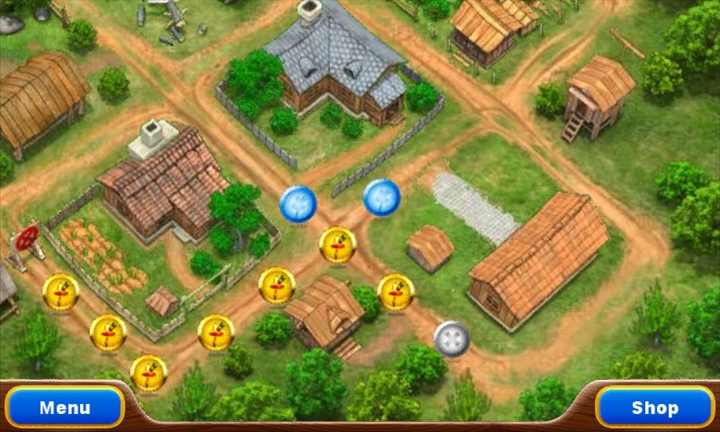 This tap interface has a huge amount of control, but at the same time keeps the complexity in the interface dialled down as much as possible. That doesn't mean the game isn't complicated - once you get to higher levels there are scores of animals to be protected and watered, produce to pick up and process, machinery whirling away, and you'll be keeping an eye on all them to try an shave just a few seconds off the time to get the gold time and the bonus stars.

Oh and those gold stars? These are collected when you beat the time goals on each level, and they are used to upgrade the machinery and equipment. For example, a faster truck to take produce to the market and sell it to make money. Or an egg powdering plant that can do three eggs at a time instead of a solitary egg. Some levels won't open up until you actually buy a certain level of equipment, forcing you up the learning curve with the purchases.

Perhaps this is the flaw at the heart of Farm Frenzy. Every level is perfectly constructed to be possible... just. Early levels do deliver on the management idea, but as you get deeper into the game, you need to start making some deliciously lateral decisions. For example, the fourth level of the game takes around four minutes playing on a direct route (get eggs, drop them in the machines to make egg powder, use that powder in another machine to bake a cake, take this cake to market to sell it, and use that money to help you make twelve portions of powdered eggs to finish the level). The key, at least for me, is to sell three of the five chickens at the start, get the machinery upgraded straight away, and then you can hit three minutes. 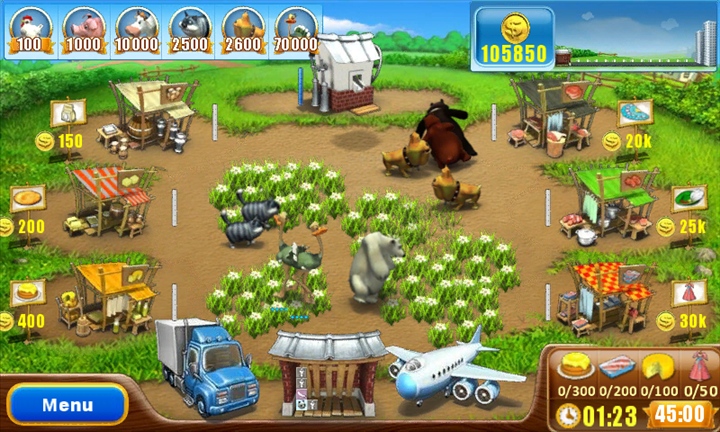 Strictly speaking, that is resource management, but for me it turns the nature of the game very slightly away from the clear UI and simple to describe goals into a challenge from the developers along the lines of "can you figure out the way that I figured out how to do this?"

It's a minor point, but it dulls the sharp addictive blade of the game for me. Farm Frenzy is addictive, and has a suitably clear cartoon graphics, and has so many levels and upgrades that there is a lot of game playing on offer here. But to me it feels a bit too clinical, too precise, and too demanding to be labelled as a fun way to pass the time - and I like my games to be fun.

By all means grab the trial, and Farm Frenzy fans will find a lot to like here. It passes me by, but there is a good game in here and you should see if you can find it.