For the record, calling this application "Board Game Clock" and not "Chess Clock" was a smart move. I would suspect that 99.999% of Windows Phone users would have no need for a clock to play chess - but there are far more people who need a timer to keep an eye on two different things, even if they don't know it yet.

The interface runs in landscape mode only, but it will switch orientation to be the right way up if you turn your phone. Neither are there any settings to play with, this is a straightforward application where you go in, start one of the two clocks running, and you're up and running. Would it be nice to change the "Player 1" and "Player 2" captions? I think so. Maybe set an upper limit for the timers,  with an alarm when one player reaches that time? Yes it would. 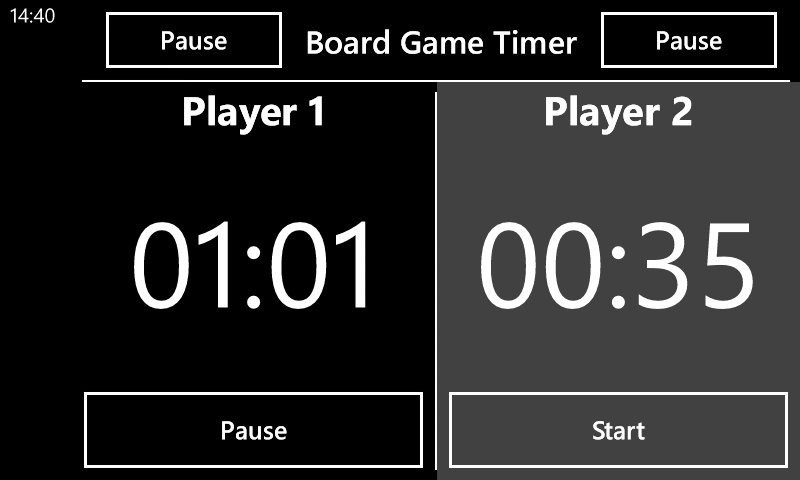 If I was looking for a complex application that I could customise to be perfect, then I would look elsewhere. But App Exchange has kept this as simple as possible, and that means I can just get on with using it. You start one of the timers with the 'Start' button, and you can either "pause" from the buttons at the top of the screen (which stops both timers), or tap the pause button underneath the running timer to start the other player's timer.

One change I would make here... App Exchange need to change the UI to 'pause' at the top and 'switch' at the bottom. In my opinion.

So, two scenarios I'm using Board Game Clock for, and the first is wonderfully domestic. My two daughters share a laptop, and they're big Moshi Monsters fans (which is an online social network and gaming zone for kids, in case you've never encountered this UK success story). Arguments over who got more time on the computer are now a thing of the past. Well, they still argue, but Board Game Clock shows the equal time so it's a bit of a futile argument.

And while I would never reveal what the numbers actually are, having Rafe on one side of the clock while he's talking, and on the other side everyone else who appears on the AAWP Insight Podcast... it's very interesting! 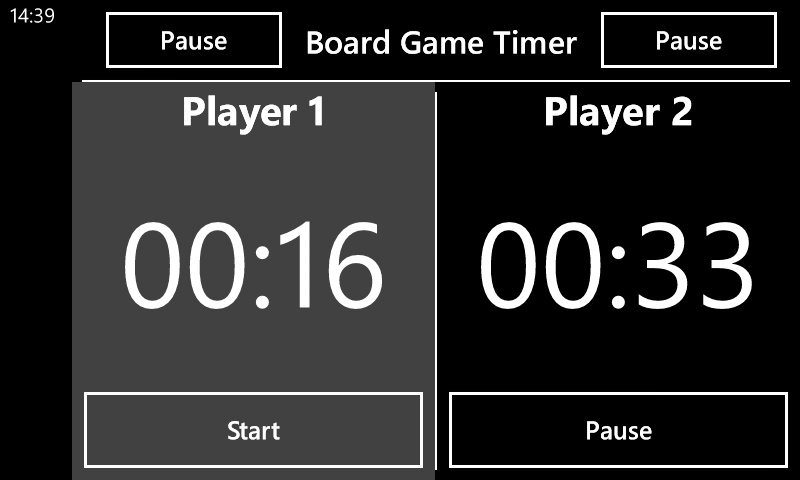 Board Game Clock might not be a killer application, it might not win awards, but it's useful enough that it's one of the few applications I have on my live tiles that is pinned, not for the glance and go information, but because I want to start it as quickly as possible.

Importantly, if you have a timer already running and want to pick that up again, then you have to hold down the "back" key to bring up the application carousel of "background" apps and pick Board Game Clock - if you open the app again from the Live Tile or from inside Xbox Live (it's flagged as a gaming app, so it's not on the regular app list, bizarrely), then the counters are reset. That's caught me out once or twice.

It's a great tool on my smartphone, and one that I can comfortably say is worth a look. And it's free. Now, how long do I have left playing Club Penguin before I need to hand over the keyboard...?