Although there are a number of smartphones with capable speakers (Nokia 5800/X6/N8 all come to mind), many have loudspeakers which are rather weedy if we're honest. Making podcasting listening around the house somewhat of an ear-straining experience and making music playback almost a no-no. Which is where portable speakers come into their own, especially the Bluetooth variety, giving maximum volume without messing around with wires. I'm reviewing several over the next month, starting with the Jawbone Jambox.

Yes, the Jambox - we're talking serious accessories here, with a price tag of well over £100. Costing a good fraction of the price of the phone it's going to be connected to, the Jambox really should be... amazing.

First impressions of the Jambox are indeed amazing. The packaging is ultra-high end and it's not unknown for this accessory to grace the shelves at Apple stores - it fits right in with their style and ethos (colour scheme notwithstanding). The accessory itself is mounted in clear perspex for all to see, with the various bits and bobs hidden away beneath. 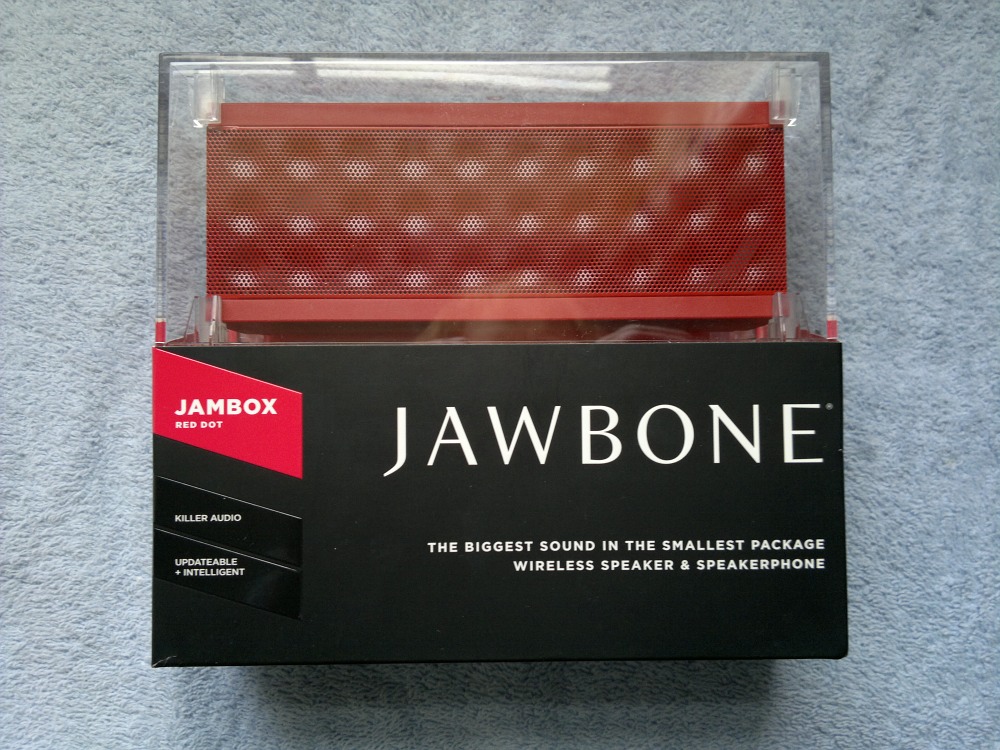 Easing off the cardboard sleeve and opening the revealed cardboard flap, we see two USB cables (one short, one long), a 'flat' style 3.5mm stereo cable, a US-spec mains to USB converter (not a huge problem, most technophiles have a myriad USB charging sources these days), a rather clever foldable felt case (with magnet closures) and a brief user manual.

All beautifully packed away and presented: 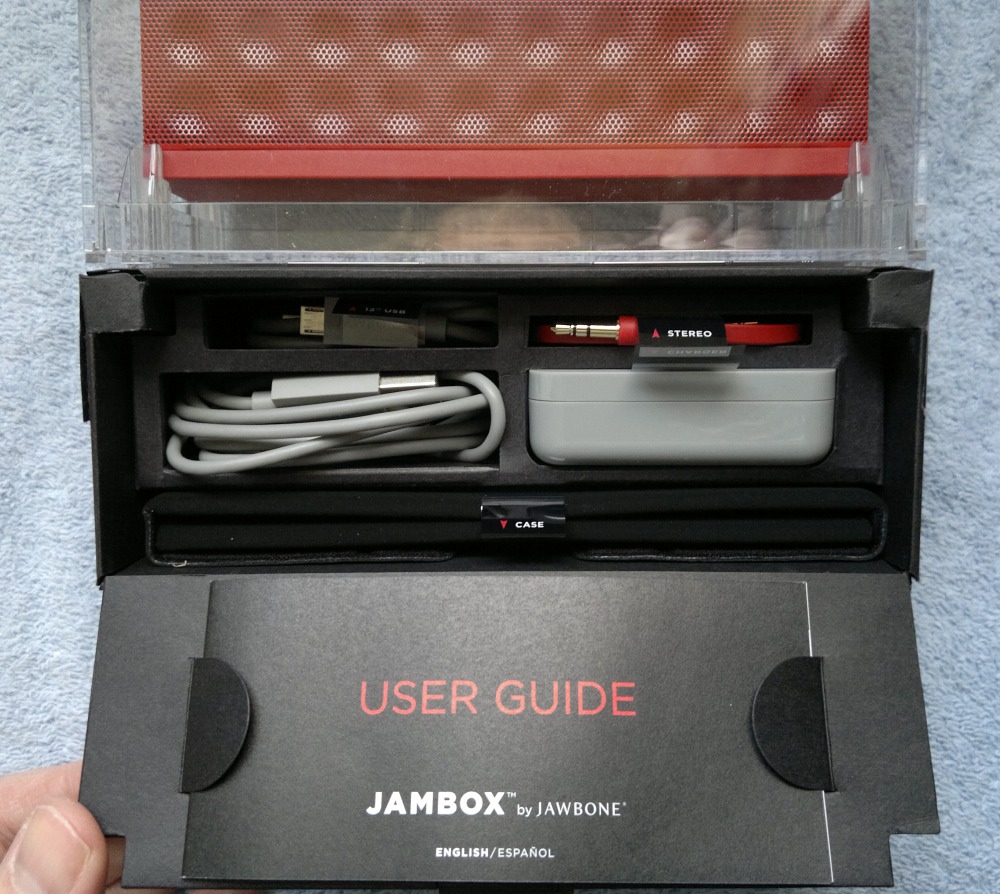 The Jambox itself is a stunning bit of design (you can get a black 'diamond' version as well, by the way), effectively a twin speaker cabinet made in aluminium, with rubber top and bottom sections. It looks 'different' and feels very robust, reassuringly heavy at 350g. Styled almost like 'Lego', the Jambox is indeed a bit of a brick, but it's one that doesn't just exist to look pretty and provide a modern art touch for your home, office or hotel room. It also packs a serious audio punch.

It's a Bluetooth (or 3.5mm audio in) speaker with nominal output of 2W x2, giving maximum volume of 85dB at half a metre. What this means in practice is that the Jambox compares favourably with a decent set of computer speakers - as indeed it should at the >£100 price point. There's obviously little real stereo separation though and the Jambox pales compared to even a budget home stereo. 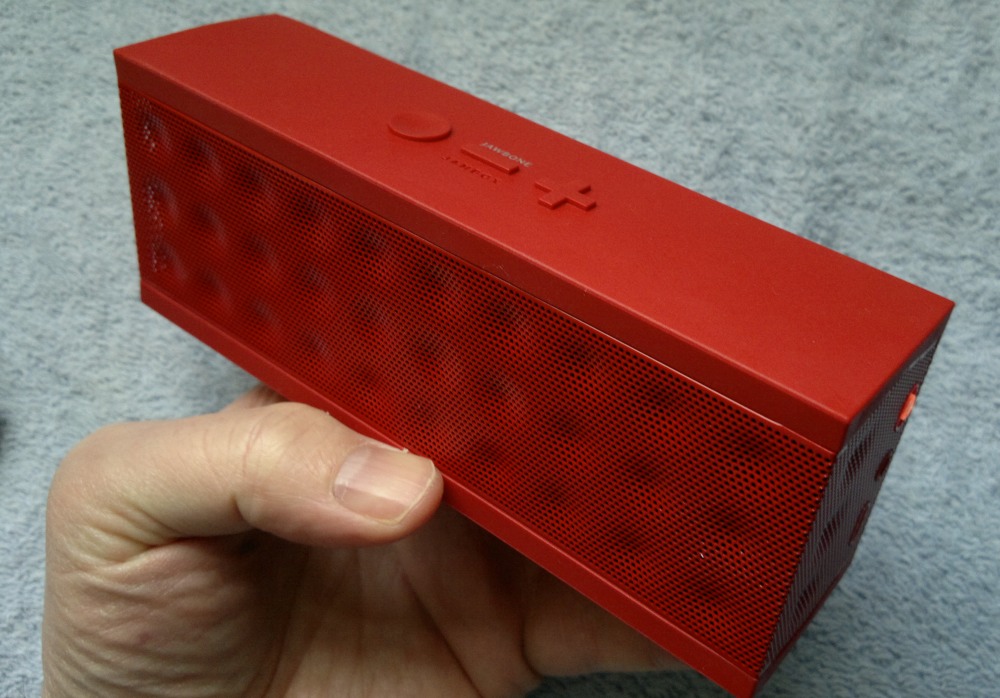 Having said that, the sound coming from the Jambox surprised me with the amount of bass being punched out - Jawbone's site refers to an "innovative moving-wall passive bass radiator and airtight enclosure" - sounds impressive, both in text and in audio.

It's a measure of the sophistication of the Jambox that, rather than being a humble accessory, it's a device with its own little embedded OS and with upgradeable firmware. On logging into Jawbone's site, I was prompted to download and install a browser-hosted 'updater', with a big new firmware update ready to go, including 'LiveAudio'. This, as it sounds, is an extra sound processing mode that the Jambox can run (you can toggle it on and off by pressing the '+' and '-' volume buttons simultaneously). 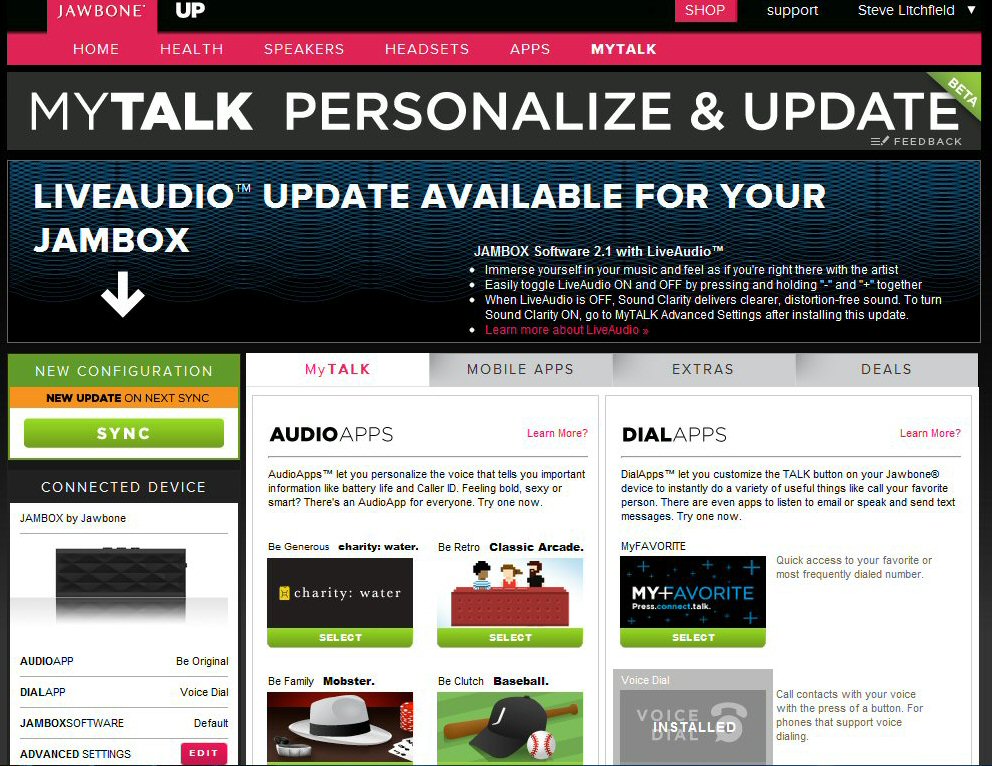 The firmware update worked quickly, a minute or two, with the Jambox turned 'off'. All very impressive for something that's browser-based: 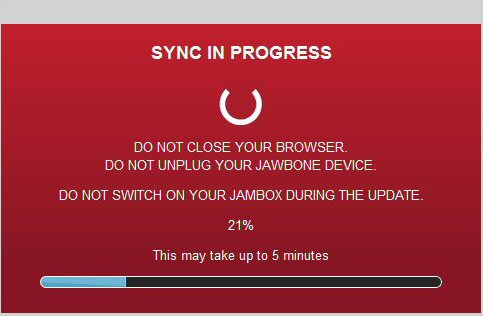 In use, LiveAudio is supposed to simulate 3D ('binaural'*) audio using just the two adjacent speakers - in practice, to my untrained ears, it sounded like just another stereo widening system (i.e. emphasising the differences between the two stereo signals) with some fancy EQ profile overlaid. Worth experimenting with, but not exactly essential.

* Audiophiles will know that true 'binaural' sound can only be achieved with headphones on, due to the way that binaural recordings are made (with microphones inside shaped ear canals inside a dummy head!)

Supplied, impressively, with near enough full charge in its internal battery, it's a piece of cake to get paired up with any smartphone. Pairing mode is initiated by holding the right-hand-side 'on' switch up for a couple of seconds, after which there's a startling audio message played over the speaker "Jambox is in pairing mode... waiting for device to connect". Accompanied by background sound effects straight off the USS Enterprise. It turns out that there are several prepared audio messages stored in the Jambox's firmware (and, yes, you can also change these using the MyTalk custom Jawbone software), including the rather useful "Battery is about..." with an estimate of the charge remaining - this is available at any point by pressing the multifunction (circular) button.

I tried my Nokia N8, my X6, my N86 and my Lumia 800, and all paired in seconds with no passcode needed. The device came up on screen each time with its proper name too, not some arbitrary product number. Subsequent reconnections did take up to ten seconds each, but this certainly wasn't a showstopper.

It's here that I encountered my first real oddity, and I don't think it's the Jambox's fault. On the Nokia N8 (my main device), the phone volume controls didn't get mapped through to the Jambox, meaning that the only way I had to control music was via the latter's big rubber buttons. it's apparently a longstanding bug in Symbian^3/Anna/Belle - I tried my older Nokia X6 and N86 and the volume controls on each phone worked perfectly to control the Jambox. I then tried hooking up the Lumia 800 and, again, everything worked perfectly.

The multifunction button on the top is also there to answer calls and, in Bluetooth mode, at least, you can take a call purely from the Jambox, should that be convenient, by just pressing the button when a call comes in - there's a microphone behind the speaker grille for just such occasions.

Although there's no display, the Jambox gets on with the aforementioned audio feedback, plus a web-based control panel. This talks directly to the Jambox and tapping on 'OK' below updates the settings inside the unit:

Jawbone quote a battery life of around 10 hours of listening, which seems quite fair, it went on and on in my tests, despite pumping out the bass. I'd estimate that you'd only have to charge it once a week for a typical use case, using the Jambox around the home or while in a hotel room on business.

I've had my fallings out with Bluetooth stereo audio (A2DP) in the past. My objections are usually around the vagaries of taking a compressed music file (e.g. MP3, AAC), decompressing it in the phone's processor and then compressing it again (using a different codec) for Bluetooth transmission, decompressing it again inside the accessory. It really isn't a very efficient way to work, yet, like much in the modern age, it's good enough for most people's needs. I did notice the occasional pitch variation in my music, where the data rates had to be adjusted on the fly, but A2DP is now good enough for most people, most of the time. Audiophiles need not really apply - and in any case they will be listening to 320kbps CBR (Constant Bit Rate) music files through a high quality, in-ear wired headset, not slumming it with a Bluetooth speaker, even one as fancy as the Jambox.

As to whether it's worth well over £100 of the Symbian or Windows Phone user's money - it depends on your use case. Think about room size, music type and source, handset/platform and volume preferences. That's a lot of variables. I can say that Jambox feels like it should be £100, factoring in the embedded OS, updateable firmware and premium packaging. The latter's important because, like the Apple gear this is often shown with, the Jambox is likely to keep its value on the second hand market, should you want to sell it on at a later date.

Over the next few months, I'm going to be reviewing several other Bluetooth speakers - though I doubt I'll find one as red, as rubbery and as well made as the Jawbone Jambox.

Steve Litchfield, All About Symbian, All About Windows Phone, 11 March 2012