Something a little different for a Friday. Frustrated that a lot of the Symbian and Windows phones I wanted to try day to day didn't have a built-in FM transmitter (I'll explain why that's important to me below), I opted to grab the Belkin In Car Tunecast 6 Universal FM Transmitter and try it out and about in the UK. Summary: it works brilliantly, far better (surprisingly) than the few phones which did have the functionality built-in.

NB: In testing this accessory, I used both the Nokia Lumia 800, running Windows Phone, and the Nokia E6, running Symbian Belle, though in truth an FM Transmitter accessory like this is applicable to any device with a standard 3.5mm output (even an iPhone, Android device or Blackberry).

A little background, though. I wrote, last year, about FM transmitters in some of Nokia's Symbian smartphones, pointing out their advantages and bemoaning the fact the functionality wasn't more widely available:

In case you've been living under a stone for the last 4 years (this technology only became 'legal' in many countries at the start of 2007), an FM transmitter (Wikipedia info) is, as it sounds, a way of sending a phone's audio stream (usually music or podcasts) via a genuine FM frequency of your choice to your car (or home, or caravan) FM radio. The power output is very low and is restricted by law to just 50 nanowatts - which is good for your phone's battery consumption and yet still more than enough to reach your car aerial, typically less than a metre away.

Alternative approaches to getting your phone's stored music collection onto your much bigger car speakers include using Bluetooth to a wireless car kit, or to plug in via a 3.5mm to 3.5mm jack lead, into an Aux port on the back of the car stereo. Both very valid and capable of higher quality, but most cars don't have fitted Bluetooth car kits and many car stereos don't have accessible Aux ports. And it may not be practical, cosmetically or mechanically, to rip out the existing stereo and replace it with a Bluetooth (or Aux)-enabled version. Making the humble FM Transmitter a great ad-hoc way of getting music transferred through a real 'lowest common denominator'/'low-tech' mechanism - after all, FM radios are built into just about everything around you and have been for decades.

In practice, I use the FM transmitters in my N8 and N86 almost every time I'm in the car - if I've been listening to a podcast in the house while getting ready to go out, I can hit 'Play via Radio' (again, note the new name) under 'Options' in any audio playback app on the phone and tap it 'on'. And the podcast carries on seamlessly via my fairly meaty (8 cones in all) car speakers with impeccable quality. Or, if I'm not on my own, I choose music from my mass memory or memory card that's family friendly and treat everyone to an album from Adele or Take That or similar. No messing with wires or Bluetooth pairing - it just works.

Well... it works most of the time. By its very nature, your phone is broadcasting a specific FM frequency at very low power. If you're unlucky and you've picked a frequency that's used by a local FM radio station then it's easy to get distortion and the two signals effectively interfering with each other. Even if, like me, you pick a frequency which works well in your area (I use 96.0MHz in Berkshire, UK), you'll find that as you travel across your country, local stations pumping out full power occasionally intrude and you might have to pause playback and mute the radio playback for a few miles.

Finding the perfect frequency for your area is purely a matter of trial and error. Literally. Pick a number (the range is usually from about 88MHz to about 107MHz, depending on the country) and try it. If you get interference, shift the number by 0.2MHz up or down and try again, rinse and repeat. it's a slight pain, but once you find a frequency that works well for you, set that on a preset on the car radio and you're off and rocking.

The last couple of paragraphs quoted are critical to the whole endeavour. Fiddling around, on a car journey, to avoid local station interference is a right royal pain, especially when within 20 miles of a city. Which is why the 'ClearScan' bit caught my eye in this £20 Belkin accessory - the idea is that the accessory takes a moment (actually around ten seconds) to scan the airwaves and then it picks the 'quietest' portion of the FM spectrum, displaying the result clearly so that you can then manually tune your car radio to this frequency. 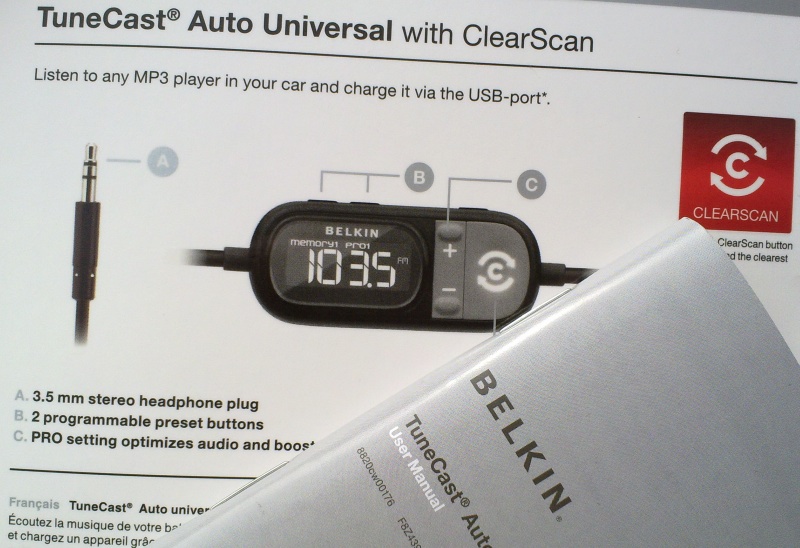 The gadget itself is around 7cm long, with a nice chunky LCD display. One end goes into your car's 12V socket, the other end into your smartphone. Set something playing (a podcast or music or indeed anything which outputs audio) and you're set.

One press on the big 'C' (for ClearScan) button and a scanning animation appears on the display, followed shortly by a frequency (e.g. "88.4", below). My car stereo has a 'scan for next strong signal' button built into the steering wheel stalk, making it trivially easy on the move to fix interference problems.

When a local FM station gets in the way, I simply press the 'C' button again and wait for the report. In fact, with my set up, I don't even have to look at the chosen frequency, since I can tap my stereo's 'scan' button as many times as needed to find it for me, all without taking my eyes off the road. Or, of course, a user could choose to use their car stereo's tuning buttons to dial up the frequency manually.

The '+' and '-' buttons on the Belkin's front let you manually tweak the frequency being transmitted, though I can't really see a use case for this.

On the unit's left/top side are three more buttons: 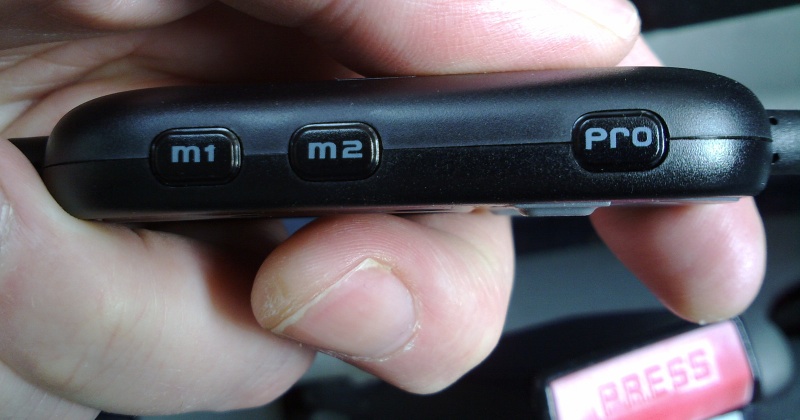 'M1' and 'M2', unsurprisingly, are memories. It's all very well getting new frequencies every time you do a 'ClearScan' but even the small amount of retuning you need to do on your car stereo is a bit of a bother. If you've found frequencies which do work quite well for you (perhaps one near your home and one near your office?) then pressing and holding a memory button allows these to be remembered. Matched with the memories built into your car stereo, changing the frequencies used to one of the two presets is a piece of cake.

In practice, 'Pro 1' worked perfectly in my car. In fact, transmission overall was much clearer than from my Nokia N8 - I suspect that the power produced from this 12V-powered accessory was significantly greater than from my self-powered smartphone. Not surprising in hindsight, but the stronger signal did make it easier to lock onto the signal and audio was clearer and less prone to interference.

What all this means in practice is that if your smartphone doesn't have an FM transmitter (in Nokia speak, 'Play via Radio') then it's really not that big deal, should you need the facility, to keep this Belkin TuneCast (or similar) in your car glovebox to perform the function rather splendidly.

Having a wire coming from your in-car 12V to your Nokia E6 or Lumia 800 (say) smartphone is a little bit of an inconvenience, but then you might as well go the whole hog and also take advantage of the USB port built into the TuneCast's 12V jack to charge the phone at the same time: 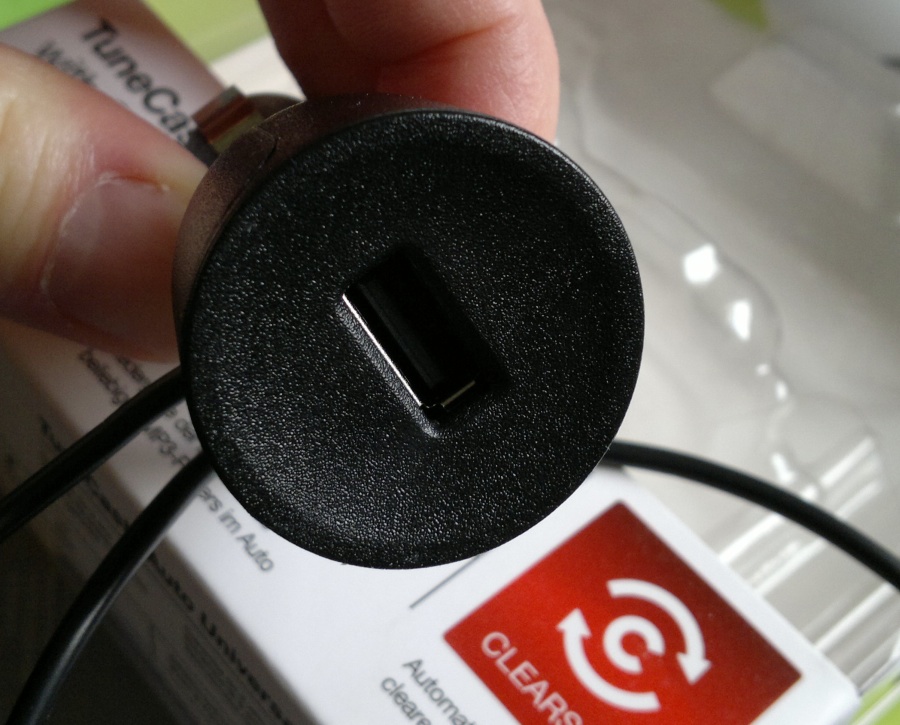 It's at this point that I found my first negative with the product - the output from the Belkin TuneCast's USB port wasn't enough to charge any of my Symbian smartphones. These are notoriously fussy about the voltage and current that they'll accept before 'Charging' appears on the display. Thankfully, my Windows Phones accepted the USB charge gratefully and I had no problems with this 'dual cable, dual benefit' approach on my Lumia 800.

I have a founding principle when buying electronics - never buy the cheapest (it'll be underfeatured, appallingly built and complete rubbish), never buy the most expensive (usually paying for a 'brand name' or unnecessary gilding) - pick something in between.

Here we have a product that's expensive enough to be pretty darned good, yet not so expensive that you go off the whole idea (adding FM transmission to your smartphone). The Belkin TuneCast I was reviewing can be found here on Amazon or elsewhere on the web, though do note that prices vary wildly (between £18 delivered and £50!)

Steve Litchfield, All About Symbian and All About Windows Phone, 18 May 2012