With a sumptuous 3D environment, TV-style pocket cameras, spin/swerve control and full online multiplayer mode, Pool Pro Online has a lot to recommend it. The limitations of Windows Phone's resolution do rather work against really precise gameplay though, and the built-in AI for offline games is poor in the extreme. Still, my favourite pool simulation yet on the platform.

Bringing the complex 3D world of pool and snooker to a 2D computer screen is hard enough, what with perspective and angles galore - bringing it to a phone screen is harder again - the limits of screen resolution and human eyesight rather get in the way. Nevertheless, Pool Pro Online has a decent attempt - although you don't really ever get close enough to the table to line up shots by eye, by 'feel', vectors are handily added to the table layout showing the expected direction of your object ball and cue ball. And, with a few caveats, Pool Pro Online is very playable, especially when pitting your skills against another human, online opponent. 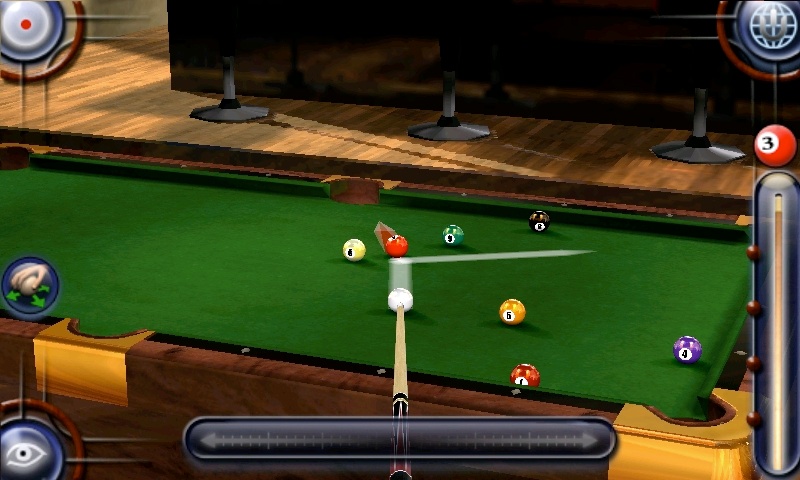 Ball animation is smooth and realistic, though only running at about one third 'real life' speed. So you play a hard fast pot with backspin and then you watch the ball smoothly travel to the object ball in its own sweet time, then strike and start coming back at you, as if in slow motion. In real life, such a shot would take a second or so in all - here you're looking at four seconds or longer. You do get used to this slow motion effect and it does make it easy to see what's going on, but it's a bit of a shock coming from titles like Virtual Pool Mobile (on iOS and Android - or indeed S60), where ultra realism is the order of the day.

'Single Player' is you against the phone's AI at 8 ball or 9 ball pool, or perhaps snooker if you're that way inclined and have longer for the game. It's certainly a good way to hone your skills and learn the interface before challenging people online for Xbox live points, though don't expect a good game. You see, Pool Pro Online has perhaps the most brain dead AI of any pool game since the world was created. 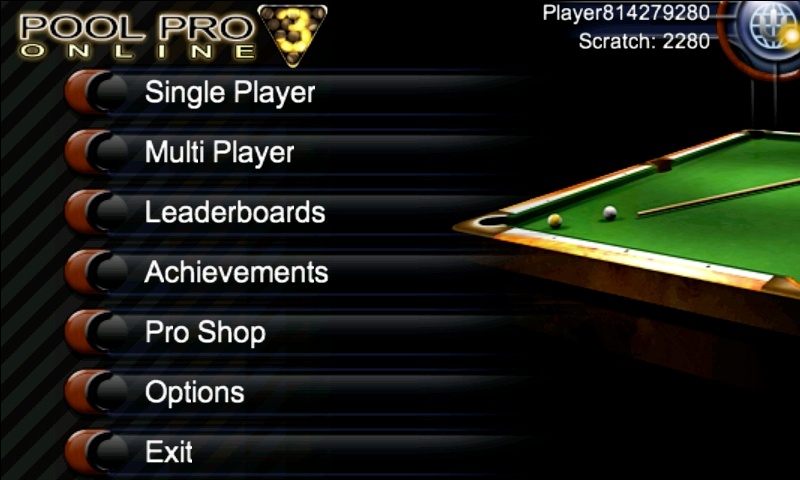 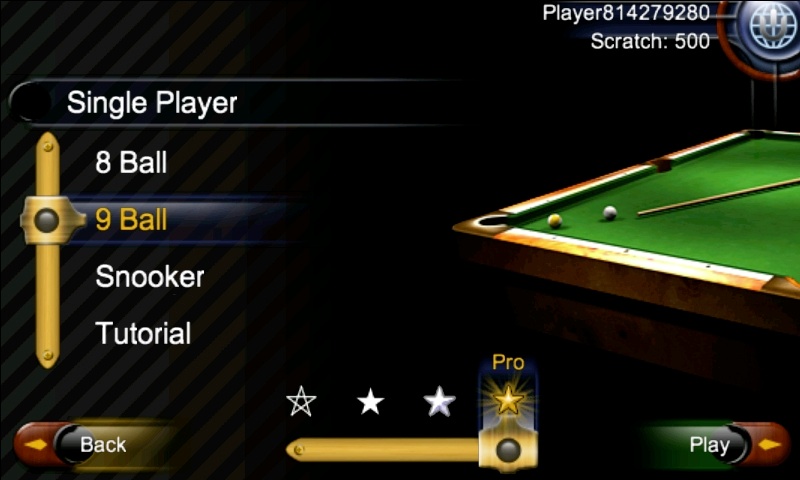 With the difficulty set to the hardest of the four settings, the computer opponent has trouble potting some straightforward shots and even more trouble escaping from the very simplest 'snookers'. So put another ball between the cue ball and his object ball and there's no attempt to think about going off a cushion - it's full ball into the obstruction every time. It's like playing your granny at pool - and there's zero challenge here. 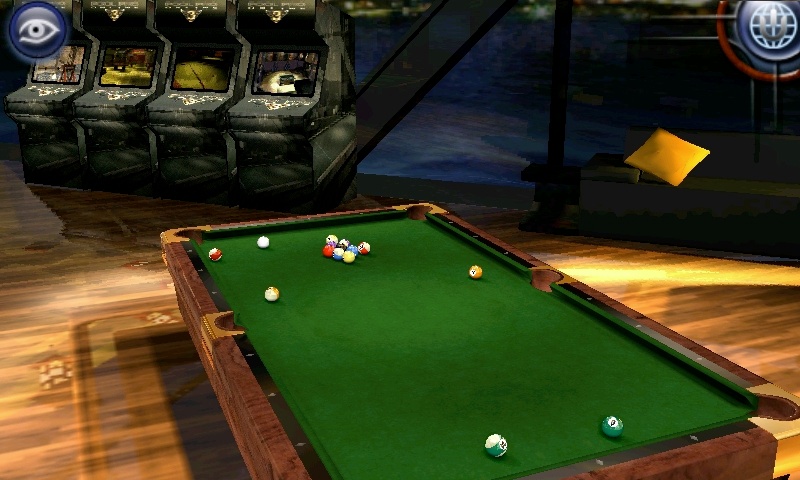 As you'll see from the screenshots, the interface is well designed, with an overhead view always available (top left icon) or relevant stats and menu access via an all-purpose globe icon (top right) - the latter also animates when you're in online mode, showing that it's searching for opponents to play.

The environment is atmospheric too, with everything from sofas to a bar to arcade machines to windows overlooking the city - though I did turn off the default 'lounge music' after the first few minutes.

You can drag the 3D perspective around and view your shot from different angles by swiping from side to side in the main view. When a shot has been taken and balls are in motion, there's also an extra TV-style 'pocket cam' which appears when a ball is anywhere near a pocket - hopefully showing your object ball dropping - this is a classy and well-rendered touch and shows what the GPU inside these Windows Phones can do. 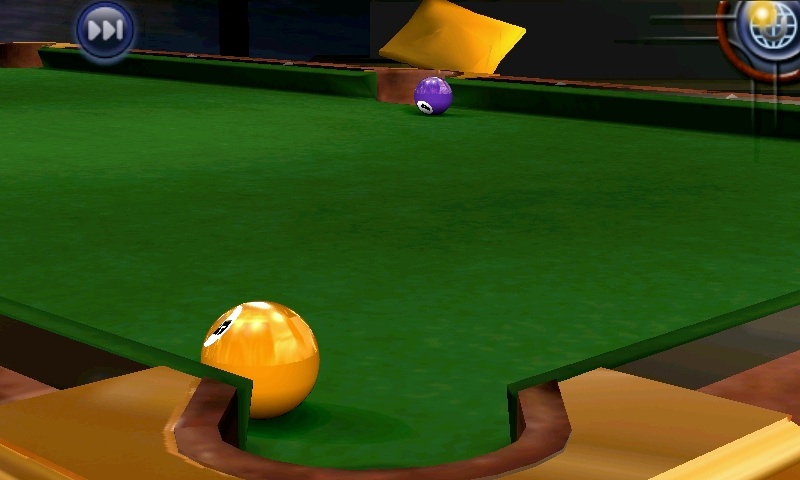 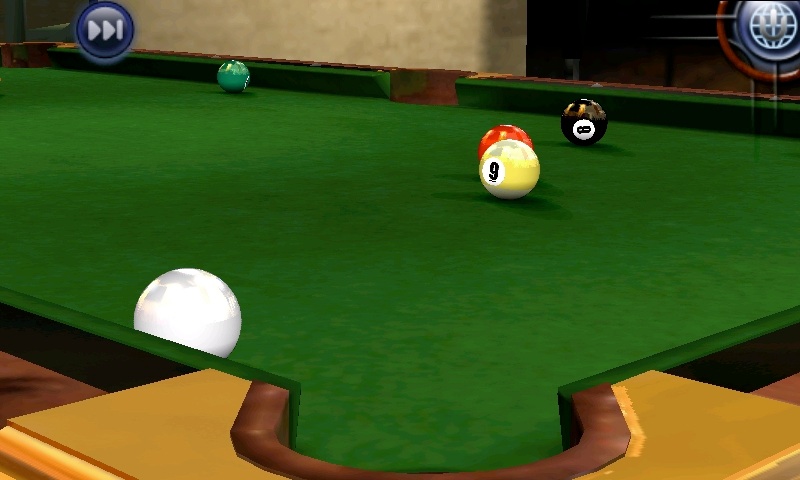 The final view is when setting up cue ball spin, as shown below - it's self explanatory and works very well, you even get to see the other balls in 'macro' perspective. Considering that some pool games on phones don't have any facility to add spin (essential for good gameplay once you get to grips with the title) at all, having this fabulous interface is a real boon. Note the massé button - sadly this isn't for raising the cue slightly to impart swerve on a normal shot, but really is only for massé shots round a close-up obstruction. 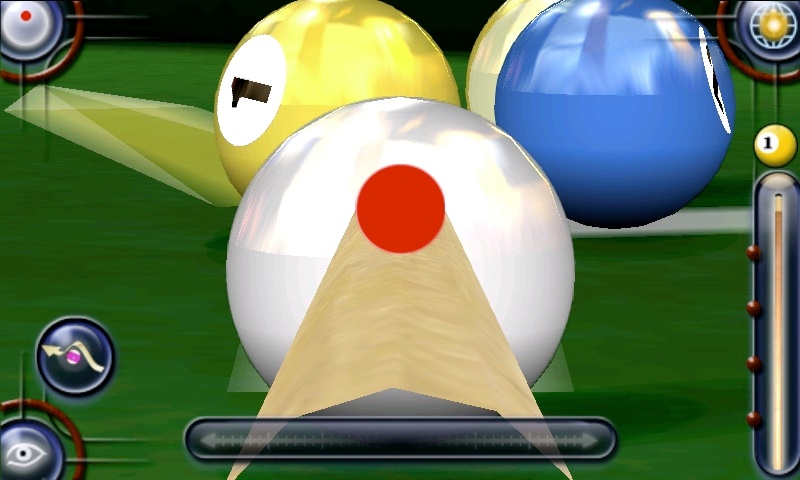 Pool Pro Online then is a well done pool (and snooker) simulation, let down by some IQ-challenged computer AI. What's needed are cleverer opponents, which is a slick way to introduce human competition via the Multiplayer mode here. This is where the game comes alive - or at least as alive as a game which perpetually runs in slow motion can get.

The developers run a server with a traditional 'lobby' system (one for each of the game variations) to meet potential opponents. During my tests over four days, I never found more than one person available, though in fairness, I was always up and playing somebody within a minute. 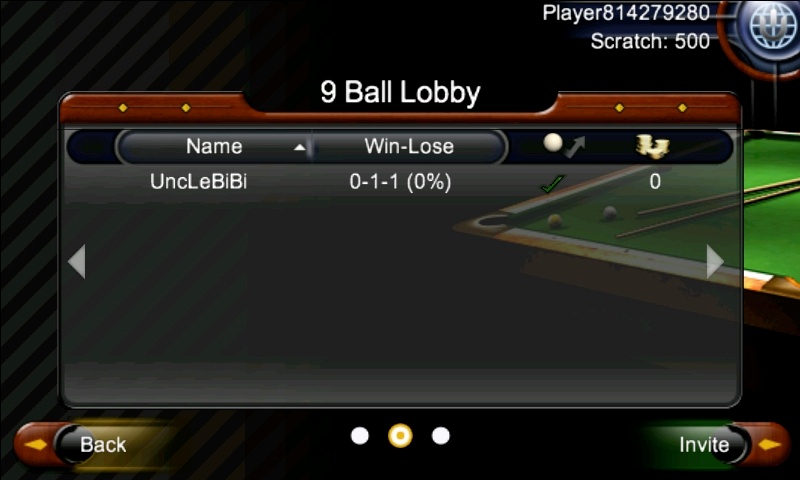 Gameplay is as you might expect, you have to sit there waiting for your opponent to decide what to do and then take the shot, so online games aren't exactly quickfire and, as I say, are somewhat hindered by the speed of the rendering and animation of the game engine. At least every player's turn is accompanied by a timer (running to a minute) so there's a limit to how slow a game can be. 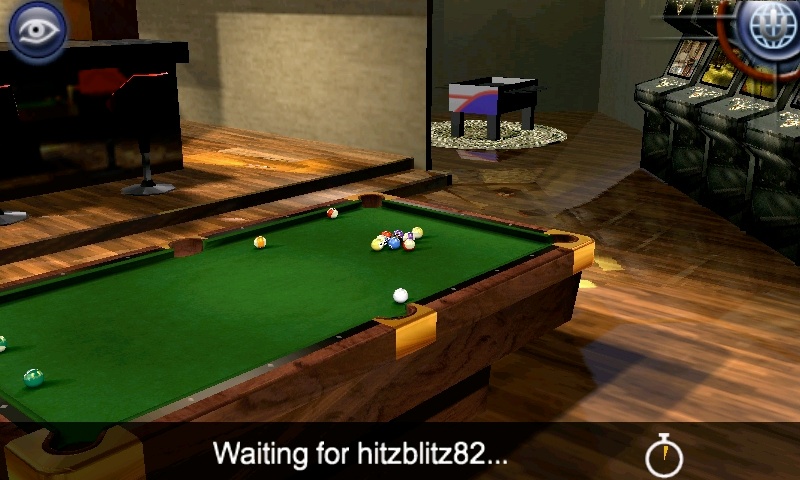 Playing against another human being is far more interesting, as you might expect, than playing against the computer - you get a wide range of abilities, a real human mind plotting strategy and thinking about getting out of snookers - as with many online games, it's a real battle of wits.

And, played intensively, Pool Pro Online is a lot of fun. Provided you keep your phone active and the game in the foreground, it's a smooth and seamless (if slow) experience. Unfortunately, the usual issues to do with Windows Phone's behaviour in terms of multitasking and power management come into play once you start giving anything else your attention. Do anything else on your phone - anything - and although the game (in theory) supports fast-app-switching, you'll still lose your connection to the online game, with this error message: 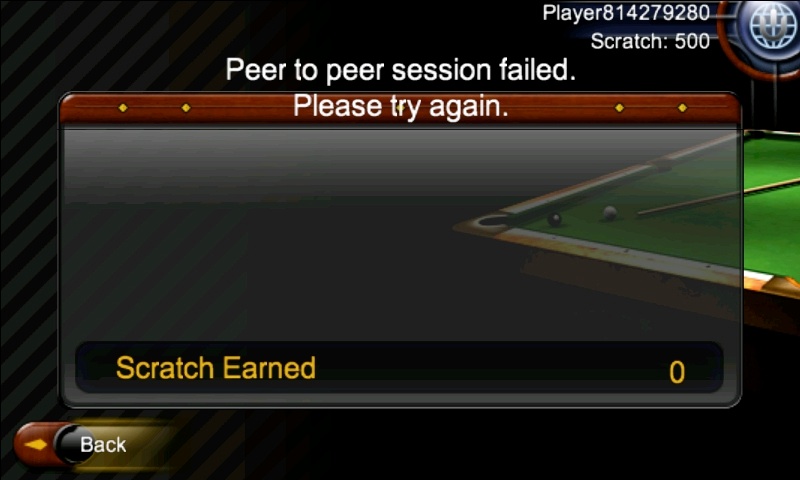 Hugely annoying if you're just coming to the climax of an online game and the phone rings or you get distracted and the screen turns off for more than a few seconds. Essentially, to the other player, you just disappeared - though if he too has a Windows Phone then maybe at least he can guess what happened.

Leave your phone for longer (say, get distracted for a few minutes by real life) and the Wi-fi powers down on the phone (I really wish Windows Phone wouldn't do this, but I don't think there's a setting to stop this?), with an even more drastic result - your Xbox live login session gets terminated and - amazingly - there's no way to log in again without starting the game from scratch again, a multi-click set of loading screens which take a good 30 seconds to get through. It's all really not ideal, and it's 99% the fault of the platform rather than the game title.

As with other Xbox Live titles, there are achievements to be completed, starting from the really easy and moving up to the extremely unlikely or extremely time-consuming (pot 10,000 balls is one such!). It's all implemented well though and it's always clear what's happening in the colourful Pool Pro Online interface. 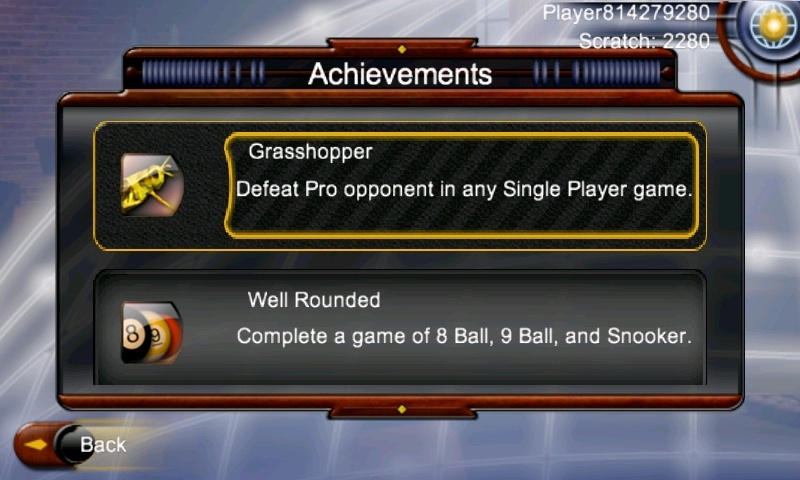 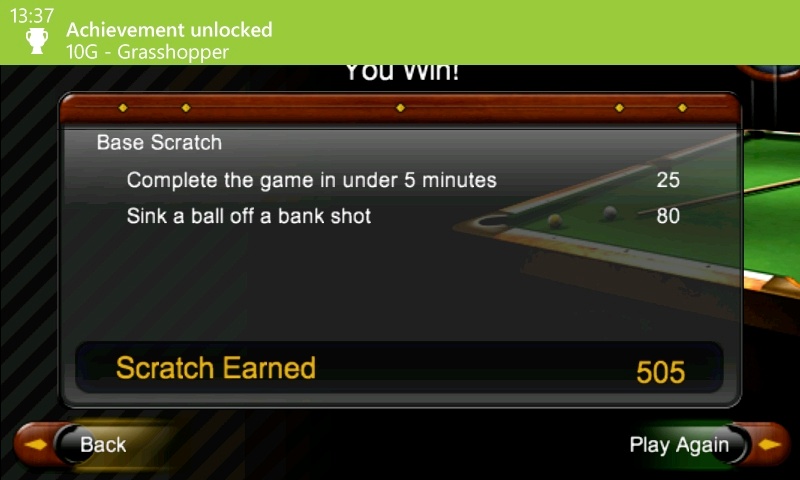 I mentioned Snooker earlier - that's because Pool Pro Online also includes a full version of Snooker, just in case you've got half an hour to spare, uninterrupted, to play through such a game online - or are happy to play against the computer AI. I shouldn't complain too much though, the Snooker variant is a welcome extra to the main title and rather unexpected. 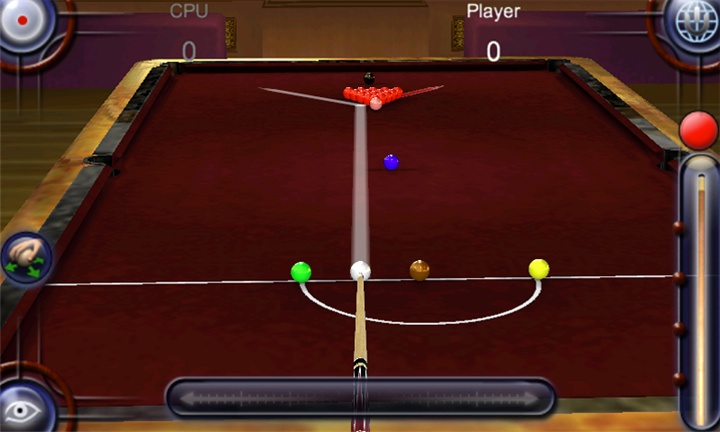 You'll notice that the felt above is red - don't worry, there's a wide selection of felt colours and patterns, available in any of the game variants, with a 'Pro Shop' where you can buy new felts with in-game points, earned as you win games and progress against opponents online.

Overall, a qualified thumbs up from me - Pool Pro Online is certainly worth the purchase price. Yet it's hampered for online game reliability by platform restrictions and hampered for offline games by a thoroughly uninspired computer opponent.

I'm glad I bought and installed it, and you probably will be too. Just don't expect an awe-inspiring 3D-rendered pool sim that keeps you both challenged and addicted - Pool Pro Online isn't quite at that level.