Why is it that the modern smartphone seems to let the side down a little bit on the humble To-Do list? While calendars and contacts are the common currency of clouds and social networks, the 'big list of things that must be done' seems to be left behind for the third party developers to pick up the slack with various levels of success. Still, when that gives you something as flexible as Wunderlist I can just about live with the omission.

Developed by 6Wunderkinder, Wunderlist is a client-server model or managing and syncing To-Do lists. In the modern language, that means it has a personal cloud that all the clients can work with. No matter how it's described, it's a way to have just one set of to-do lists, accessible on multiple devices. 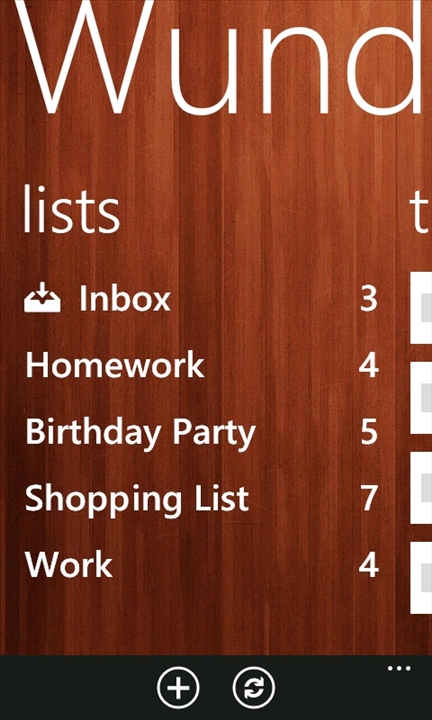 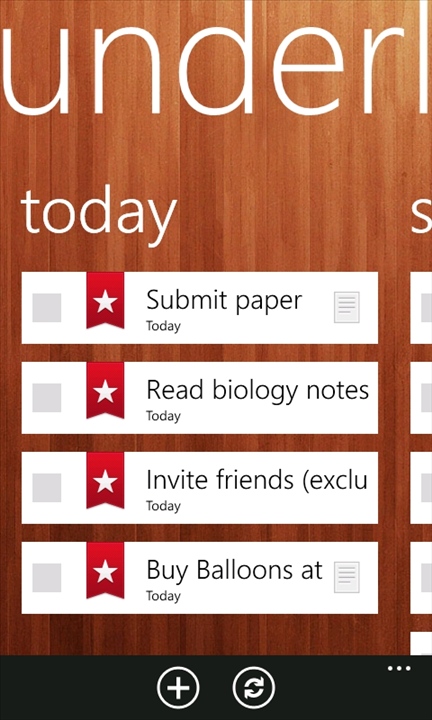 Your account (which can be set up on the first screen of Wunderlist's Windows Phone application if you are new to the service) is accessible not just on your Microsoft powered handset, but also on iOS and Android devices, and the main website which works in mobile and desktop browsers. Changes made in one area will be synced back to the server, and then available on every other client.

Perhaps the various accounts for the people hub have left me spoiled, but it was surprising to see a manual button to sync Wunderlist. I would love the code changed so this happens in the background. While I can see the benefit of having a button the user can hit to force a sync, it's a common task and common tasks in smartphones for the masses should really hide their complexity as often as possible.

It's unfortunate that Wunderlist's reliance on the Metro UI, which makes it very accessible to new users, is a bit hit and miss. Metro can wrap itself around difficult presentational issues (such as an email inbox, with multiple folders and options), but Wunderlist falls a little bit short. User choices seem to be shoehorned in to random places in the UI and it doesn't feel as smooth and easy an experience as I know apps in Metro can be.

I suspect this comes to the developers making a choice of defaulting to 'how Wunderlist does things' and not 'how Microsoft and Metro does things'. For example, the initial look of the application has a wood effect background. This is something you can tweak in the settings to be other funky backgrounds, but unfortunately there is no 'turn it off' button to get a black or white background with contrasting text. Wunderlist will always look a little bit different on your phone. 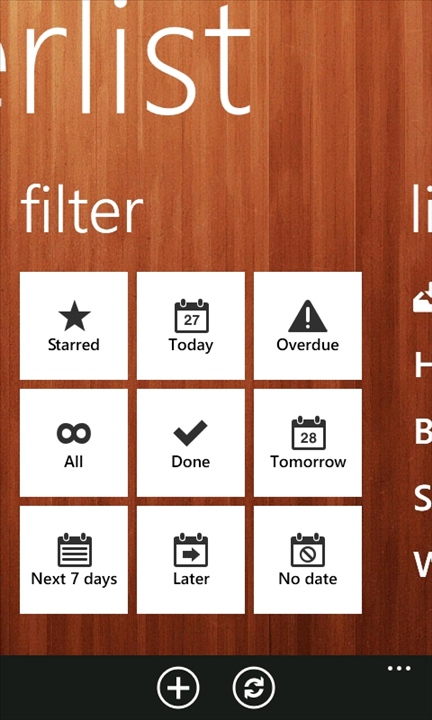 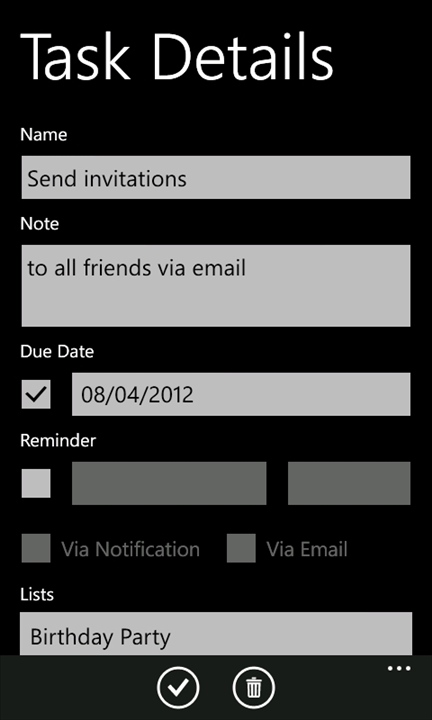 These issues aside, I like Wunderlist. What really makes it work for me is the ability to have multiple To-Do lists. Take the websites I write for, it's incredibly useful to have a list for AAWP, a list for Eurovision, a list for the Edinburgh Fringe and keep these separate from a Shopping List and Long Term Life Goals.

Each item on a To-Do list has a number of options. Not too many (an extra text field, due date, a reminder date, a flag for 'this is very important' and a 'completed' check box), but enough to give a sufficient level of complexity and organisation. My personal preference is to have a priority level in there as well (from 1 to 5) but I think that's a holdover from the old Palm OS To-Do app I loved.

You don't need to set these up when you are entering them - just type the main text in the box at the top of the screen, press enter, and it's in the list. That speed is key, because you want to get your ideas into a task manager as soon as you think of them. Hopefully on the next version Wunderlist will add in the predictive keyboard option, because the current code gives you the keyboard without the correction options. When speed is key, having the smartphone change 'fasr' to 'fast' is really useful.

Perhaps Wunderlist's main issue is one of speed. To-Do lists really need to be applications that do not get in the way of information either writing or reading, and there are moments when the app slows down. A bit of polish on those moments and Wunderlist will remove another small hurdle to becoming my To-Do list of choice.

To be honest it's almost there. Some of the key things I look for are already present, namely multiple lists, a way of getting the information out of the device and usable somewhere else, good filters and searching to find out what needs done at a specific moment. But it's not a home run of an information app just yet.

What Wunderlist needs now is not just to be a little more Metro in the UI, but to be really Metro. The developer needs to sit down with the Metro Style Guide and follow it to the letter; they need to sacrifice a touch of their independence to fit in with the rest of the platform; and they really need to discover just how useful live tiles can be and do something more than a small 'tasks remaining over all lists' counter.

Wunderlist will do for now, but it would be very easy for another focussed To-Do manager to knock it off the top of the pyramid.