Picture a time when it took four minutes to open a game, when your games ran at a resolution of 256x192 pixels with just 15 colours, and when the religious war was "Commodore vs Speccy". Now get ready to relive it on your Windows Phone with MetroSpec. This is a full blown emulator of the first ZX Spectrum , the popular range of 8-bit computers from the 80s that started with the 16K model, and finished with the disk-drive enabled Plus 3. MetroSpec emulates the 48K and the Spectrum Plus, which is effectively the same model but had a fancier keyboard than the rubber chicklet of the 48K model.

There's a lot of nostalgia on offer here, but what's not on offer is a TV output, keyboard or joystick. MetroSpec is going to have to deal with an even more critical issue... how to run everything through the touch screen of a Windows Phone. 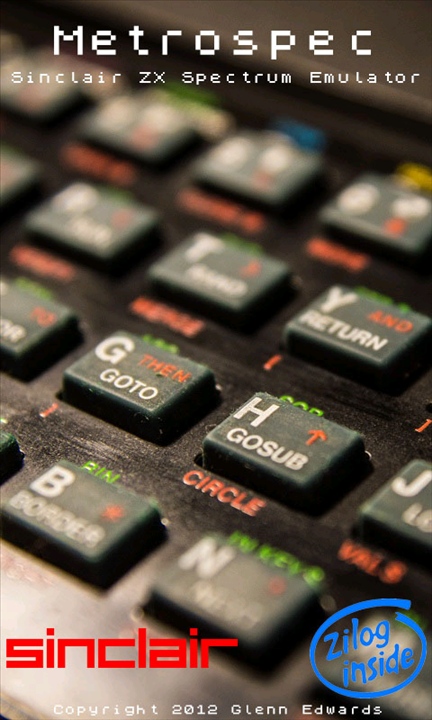 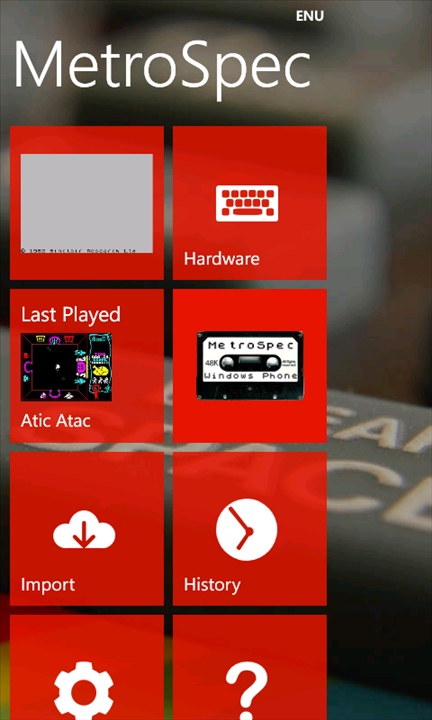 It's actually less of a problem than it first appears. The majority of people who will download MetroSpec will be looking to the extensive library of gaming titles that were coded for the Spectrum platform in the 80s. With over 15,000 mainstream titles, the majority of them need only basic keyboard interaction to escape the menus and a joystick for the majority of the action in the game.

MetroSpec covers the joystick issue in the same way that every other arcade game on Windows Phone manages to do it... it provides an onscreen joypad to use. MetroSpec can be used in either portrait or landscape orientation. In portrait mode, the joypad is visible under the screen, while in landscape it's a 'ghost' image over the screen. Obviously, the latter means you are going to be obscuring part of the game, but for that sacrifice you will get a full screen view of the game, as opposed to the split view in the portrait mode.

There's also an option to use the accelerometer as the joystick input mechanism. The success of this is much more dependent on the game that's being played.

As with any emulation, a bit of playing around and tweaking is to be expected, and MetroSpec is no exception. Sensitivity can be altered on both input mechanisms, and you can lock your screen orientation to portrait or landscape to assist the use of the accelerometer. Be aware that the settings screen can only be accessed from the main menu, so you will need to hit the back key quite a lot until you get everything settled and usable.

The joypad takes a little bit of getting used to, especially if you are used to the simulated analogue sticks from other games. You have a large 'dead' space in the middle, and need to slide (or tap) your thumb to each direction. There's a fair bit of distance to travel between the direction keys, and it takes some getting used to. The initial experience is one where the games do not seem to be reacting, but you just need to commit to doing much larger control inputs and you'll be fine.

If you're looking to do programming or text adventures, the on-screen keyboard doesn't really cut it, but for single key-presses it is usable. Thankfully, the Spectrum is predominantly a games machine, which suits the environment of a Windows Phone handset very well.

But how do you get all the games into the emulator? While the ROM images for the Spectrum machine are freely licenced by Amstrad for use by the emulation community, the game images are a slightly gray area. Many people continue to code and release games for the Spectrum community, and a number of these titles are included in the MetroSpec download (such as a the rather wonderful Bejeweled clone 'BeTiled', coded in 2007).

For all the other games (and I know that the fans are going to head for Jet Set Willy rather quickly) you can either point directly to the file's URL, or you can log on to your SkyDrive account and download the relevant files. MetroSpec supports the .z80 and .sna image formats, and the .tap and .tzx tape formats, all of which are standards in the Spectrum emulation community. It shouldn't be that hard to find the games of your youth (cough, World of Spectrum).

Any file downloaded will stay on your handset till you delete it, and alongside the image file, MetroSpec will save up to three different states of the game, so you can 'save' a game at any point in the action using the emulator, and not be reliant on any in-game mechanism. 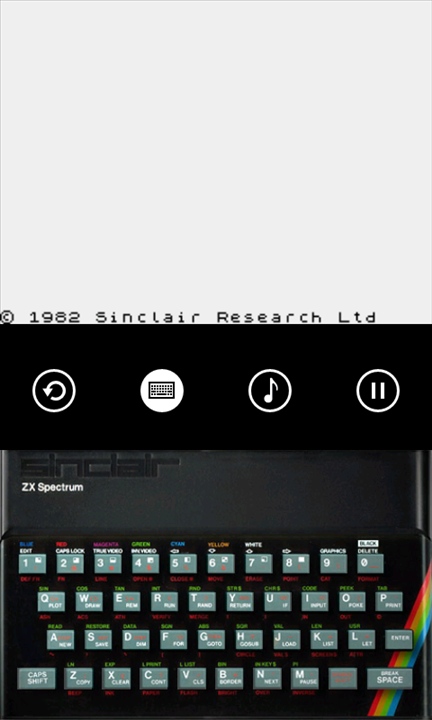 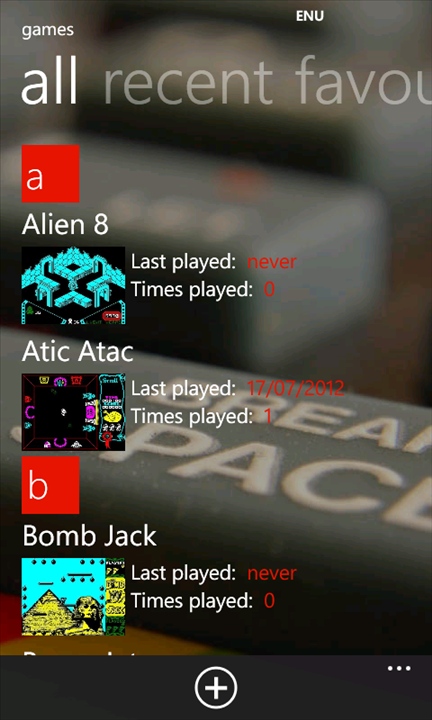 The proof of the pudding is in the playing, and it's very hard to come up with a definitive answer here, because much of your experience will come down to which games you decide to play. Many of the classic Spectrum titles that can be played in a rather deliberate way -- such as Jet Set Willy, Head over Heels, and Robocop -- will feel almost faultless on this emulator. Titles which need more keyboard interaction (such as The Lords of Midnight) and those that demand very fast and precise inputs (arcade based games like JetPac or Tornado Low Level) are going to be a little harder to play.

What is clear is that MetroSpec is a very well put together emulator, that makes the best use of the input mechanisms on a modern smartphone. Earlier models of Windows Phone will need to mute the sound to achieve a consistent frame rate, but second generation devices (such as the Nokia Lumia range) will give you Spectrum titles at full speed.

There's certainly scope for improvement (such as supporting the 128K machines), and while the interface carries over many of the Windows Phone 8 style motifs, there are moments that getting as much information on the screen is more important than sticking with the style guidelines for text and information. However, I can live with all of that because of the memories this app brings back, and the games that I can play once more while on the move. 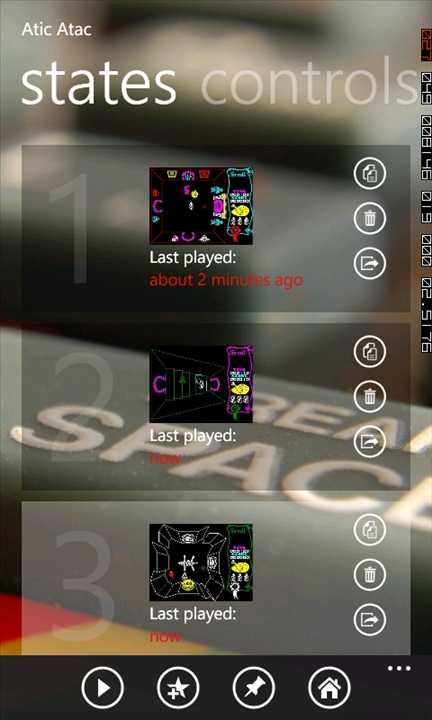 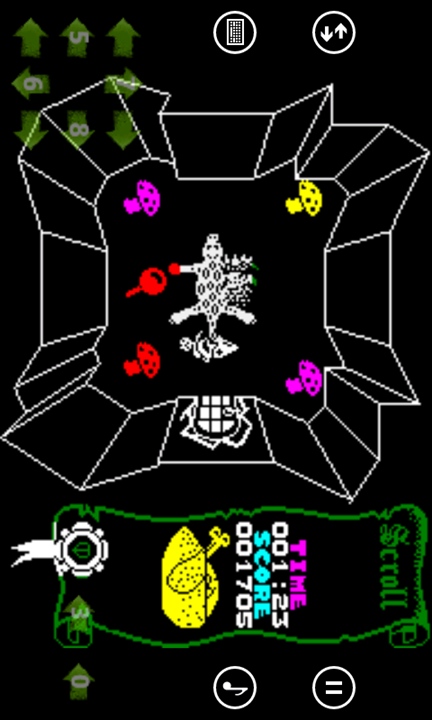 I'm sure I'll encounter bugs with certain games, it's impossible to test every combination, but I'm reassured that these would be picked up quickly based on the example of the developer's clear communication to users over some recent Dev Center issues (the Free version isn't yet available, but Microsoft's engineers are working on the issue as this review is written).

I remember deciding when a game was worth 99p on a Saturday afternoon. At 79p, MetroSpec is cheaper than some of those classic Mastertronic games, and is even better value for money! Not just a recommended download, but a recommended purchase for Windows Phone users of 'a certain age.'