Strategy games are a favourite of many gamers, and with 3D graphics things go to a whole other level. With ARMED!, Windows Phone gamers can now get their fix too. With this game, the action can get intense even though gameplay is turn based, rather than real time strategy. ARMED! is a total mecha fest too, so if you used to play BattleTech or MechWarrior, this is definitely a game that you should check out. 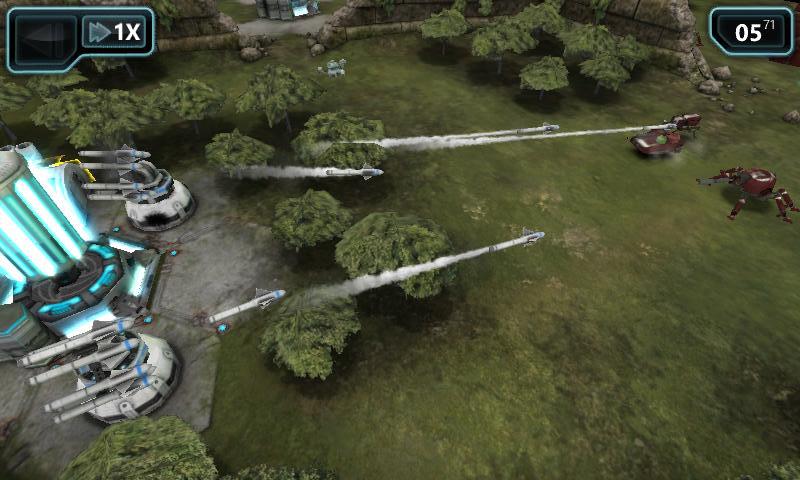 ARMED! has become something of a seminal title for Windows Phone 7 and has even found its way onto the Windows 8 store. Many strategy games across various platforms have adopted the moniker of "RTS", i.e. real time strategy, where both sides can build their forces at the same time – whether it be human vs computer or human vs human. However, that is not how strategy games started out, in earlier times it was unheard of to play a strategy game without just one side moving at a time, this is how things started out back from the days of table top 'paper and pencil' role playing games. 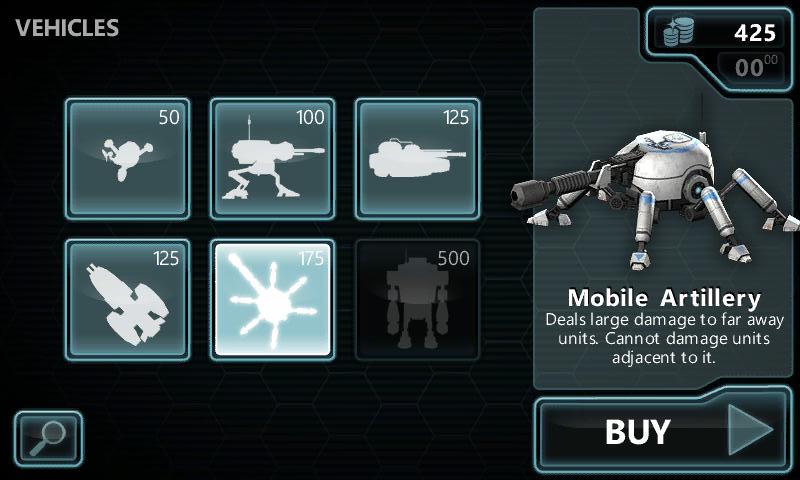 It's this turn based strategy model that ARMED! adopts for good reason – because besides playing against the artificial intelligence of the game, ARMED! has an online multiplayer mode. Trying to manage a continuous game session where two people are building weapon platforms and tanks, etc, would not be advisable on a device that cannot count on having an always-on data connection. Instead, the multiplayer aspect of this game is managed through a central server, which sends a push notification to you, via Toasts and a counter on the live tile, when your opponent has made their move. Player matching is performed via the third party Scoreloop service. There's also a 'local' mode where each player passes the phone back and forth – old school.

Okay, so this review started out somewhat back to front – we know that there's a multiplayer aspect, but how does the game actually work? 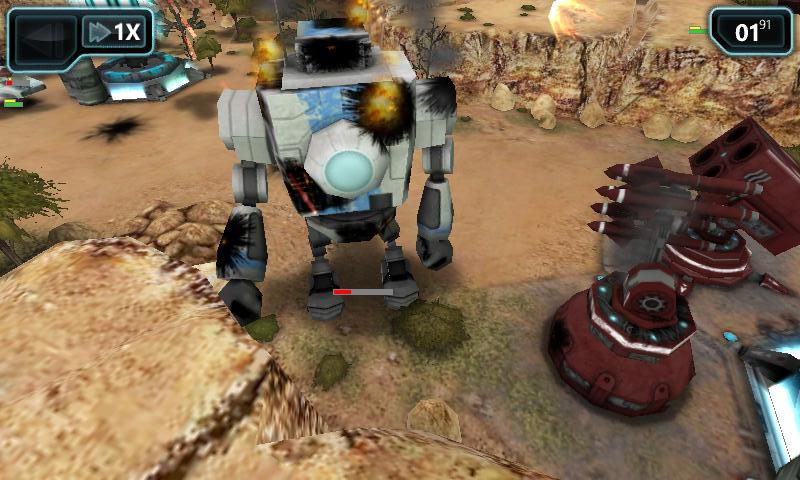 There's no story to ARMED!, there's just two sides battling for control of resource generators across a battlefield – who needs a story? Yes, ARMED! is the classic game genre where each player has to capture and defend control points, which will reward them with a greater generation rate of resource points (thus decreasing the opponent's rate) with which to build more war machines. 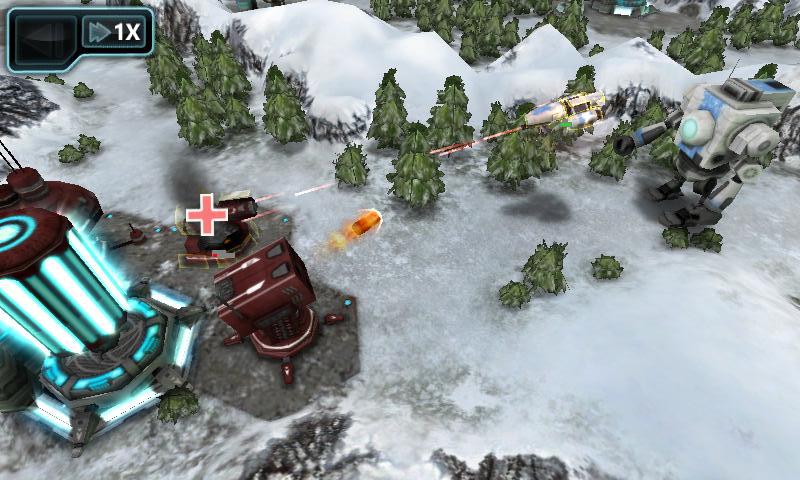 Your view of events on the battlefield is limited to where you have units. Areas out of your units' visual range are still mapped, but no enemy units will be visible.  This is what scout units are made for – build them and send them out to hide among the trees in the hope of avoiding detection while feeding intel back to you. Also, as you upgrade your main base, there is a degree of invisibility (i.e. stealth) available for your units. 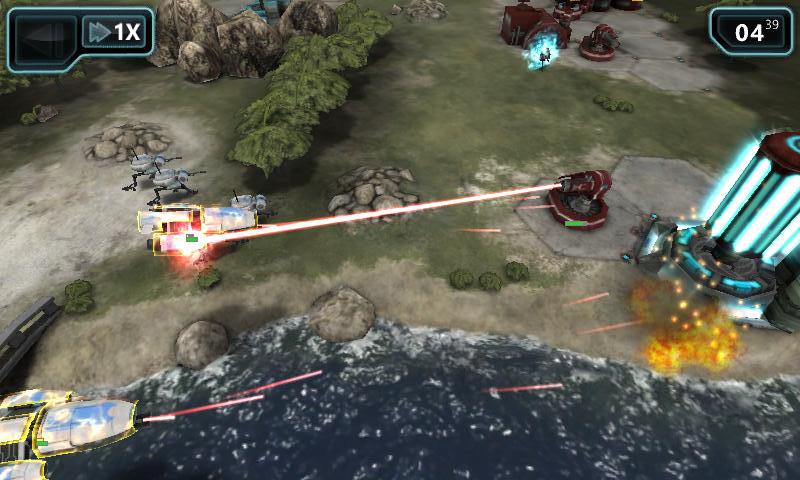 Buildings play a big role in the game, and can only be built around your main base and the various generators (i.e. control points). There are three building types: factories, various weapon platforms, and repair stations, and each can be upgraded. However, things are far more interesting than a simple 'increase hit-points and damage points'. Instead, most types of buildings have more than upgrade path that you can go along, allowing you to specialise individual buildings for specific uses. For example, factory units can be upgraded to have a hangar with which to build aircraft, at the cost of other types of upgrade. Similarly, laser turrets can be built for damage power or for specialising in shooting down missiles. 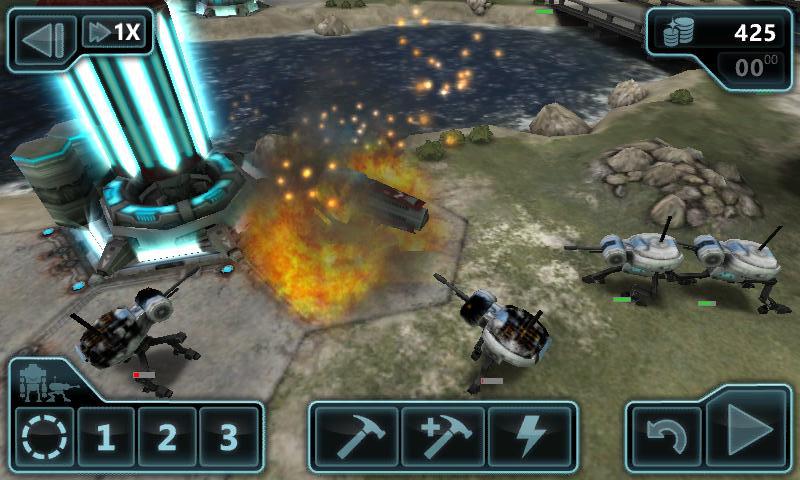 There are various types of vehicles, mostly robotic – my favourite was the six legged mobile artillery units. However, the biggest of all is the two legged robot that can stomp into battle and smash enemy units with its metal fists, which is bliss for an old MechWarrior fan like me. This sort of mecha-on-mecha destruction also benefits from the turn based gameplay model as you can take your time to plan your moves, then once you set your commands in motion, you can zoom in and watch the carnage up close and manically laugh your world-domination-filled head off.

Having played ARMED! for quite a long time, I actually have no complaints or gripes with this game. The graphics are great, the music is ideal, and the control method spot on for touch-slab devices.

You can find ARMED! via the AAWP App Directory. It costs £2.29 but has a free ad-supported trial mode.