Sometimes there comes along a smartphone game that simply enchants me when I first run it, and it never lets go. There are a lot of games that can do that in the first ten minutes of play, but for a title to be really special it needs to retain that feeling in the following hours and days. Carcassonne is one such title. Its availability on Xbox Live has been promised since the start of the year, and now it's here, I've let out a little cheer.

For those of you unaware of Carcassonne, it was first released as a physical table-top game in 2000, winning many awards and critical acclaim alongside a legion of players. Expansion sets were released, and it continues to sell well. It has also had numerous digital releases on PC, Xbox, iOS, and Facebook. 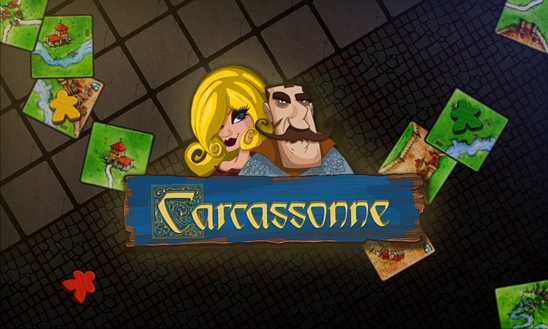 Carcassonne is a typical 'German Style' game where there is less confrontation between players, everyone is a participant until the end of the game, and rely on a mix of strategy and resource management for the challenge, as opposed to a more aggressive mix of conflict and luck (such as Risk).

Probably the most important part of this title is the initial tutorial mode, which steps you though a typical game, showing you the controls, and introducing the concepts that allow you to score during the game, and also how you score extra points at the end of the game.

The easiest way to describe Carcassonne is that it takes two genres and smashes them together. The first is a jigsaw, the second is capturing territory and scoring points while doing so. Both of these are closely tied together.

Let's start with the jigsaw component. Carcassonne is played by between two and five players, each playing their turn sequentially. You start by drawing a square edged jigsaw 'land' piece and place it on the table. Apart from the first piece, each new piece must touch another piece on at least  one edge, and the terrain must match up. You have grass meadows, roads, and towns, and like must always touch like. 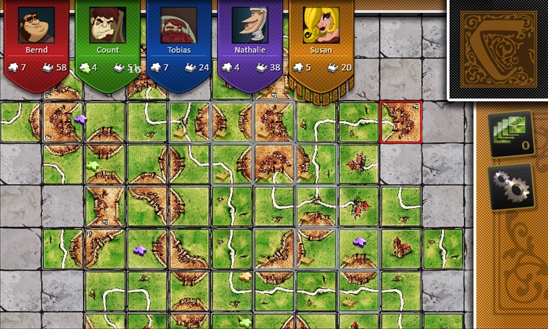 Once you place a land piece down, you have the option to place one of your seven tokens onto the piece just played (they're called 'meeples' by the way). You can place them in a city area to occupy the city as it is built up, on a road to take charge of the road, or in a monastery and wait for the land around it to be finished, or to start farming the meadows.

When one of these structures is finished and you have a meeple that is part of the finished structure, you'll score points, and the meeple is returned to your hand. For example, when a road has two fixed endpoints (such as a city gate at one end and a crossroads at the other), you score one point for every land piece that makes up the road if you have a meeple on it. Finish a walled city and you pick up two points per land piece (and two extra points for each pennant in the city).

With only seven meeples, you will have to make some serious decisions on scoring. Do you lock in a meeple in one region to score big later in the game, or stay flexible and gather lots of low scoring opportunities to return the meeples back to your hand? It's also important to note that to score in the end-game you need to have farmers in the meadows, but once you play a meeple as a farmer you will not be able to return him to your stock of meeples for the entire game. Farming is for life. 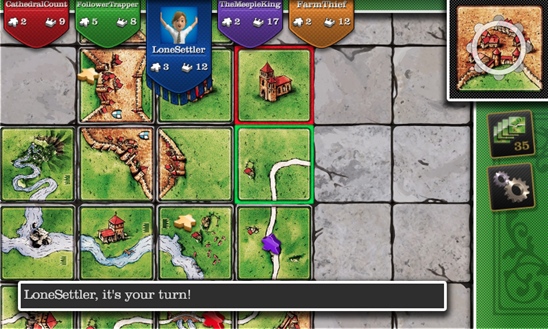 This is why the introductory tutorial is so important. Like most german style games, everything in the gaming world is interlocked, so you need to be brought up to speed very quickly with all the concepts of the game to understand and enjoy the game. Thankfully, it succeeds. Carcassonne has the right number of elements to allow this to happen quite quickly, although it takes three or four games for the principles to actually click into a mental place that allows you to really enjoy the game.

Right now, you have two variants of the game to play - the initial version of the game, and the first of the expansion sets (The River). The menu screen looks like further expansions can be made available - I'd be happy with a 79p / 99 cent add-on buy to bring the 'Inns and Cathedrals' version to my Windows Phone in the future.

The user interface is very simple. You have drag and drop to place your land tile, and a tap on the tile can change the rotation to your choice of orientation. Confirm the placement and you are zoomed in to place a meeple on the tile if you want to. It's simple, touch-based, and there's no confusion present.

While there are multiplayer options, Carcassonne on Windows Phone does rely on the computer AI to provide a challenge, and it does that as well. You can select up to four opponents of varying skill to play against when you start a new game, from a pool of eleven players, each rated out of three in terms of game strength. 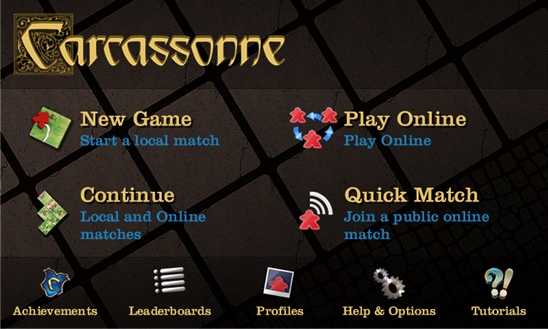 I also like that you can start multiple games, and when you return to Carcassonne you can pick up any game in progress, or start another game. There's no danger at all of a game being lost due to a wrong button press.

Sometimes an AI isn't who you want to play, you need to have a human at the other side of the board. Carcassonne allows that as well, with an online multiplayer version. You can join in a random game online (the 'quick match' option in the menu), or set up a custom match. This is driven by your Xbox Live account, so when you set up a game you can invite people in from your Xbox Live Friends list, or leave the game open to the public for the next available player to select a quick match.

Right now, you'll need to rely quite heavily on your friends list as the number of players looking for a quick match is still quite low. This should improve as more people pick up the game and start playing seriously. It would be nice for incoming moves to show up as toast alerts or on the flip side of the live tile, but if we're getting expansion packs in the future, I'd hope that developers Exozet polish the online experience a little more, because that would really make this a strong version of Carcassonne. 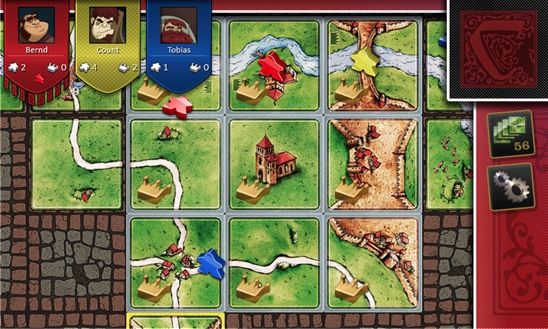 Carcassonne has been a long time coming, and it is not a disappointment. It's not perfect, as anyone trying the online multiplayer will see, but everything you would expect is here. A faster AI implementation might be nice as it can get quite slow when playing a five player game against the strongest AI versions, but the AI's are beatable at each level, although not easily so. That's a great feeling to have when playing.

Carcassonne looks great, plays very well, and brings the board game to Windows Phone without any silly little tweaks, animations, or 'developer driven improvements'. It does have initial difficulty, and that may put some people off this title, but if you can get past that moment you'll find a rich and rewarding gaming experience.

Can I stop reviewing this now and get on with playing it?