Transparent, waterproof pouches that enable us to use our tech in the pouring rain, down the beach or even, in extreme cases, underwater, have been around for a while, of course, I looked at Proporta's Beach Buoy last year. And now we have E-Case's eSeries 9, with smaller overall form factor and higher window-to-bezel ratio. Here's the eSeries 9 submersible case in action with a couple of likely candidate handsets. Summary? We have a winner...

Sent over for review were the grey/black and orange versions of the eSeries 9, both claimed to suit modern smartphone form factors. I instantly earmarked the red one for my red Nokia Lumia 920, with the black one perhaps perfect for my Nokia 808 PureView - except that was taking the photos, so I tried out the venerable Nokia E6 (itself an 'E Series'!) instead - it looked good in the case but did rather rattle around, so note that there's a separate eSeries 8 for this slightly smaller device size, though I didn't try it.

Of particular note is that the eSeries design has a 1cm vertical edge opposite the ziplock, meaning that the case naturally stays 'opened out' to a degree, i.e. the phone isn't pinched from both sides. This makes it easier to get phones in and out, and also allows for some flexibility in placement of each phone in the case, unlike the Beach Buoy design, where placement is more or less forced. 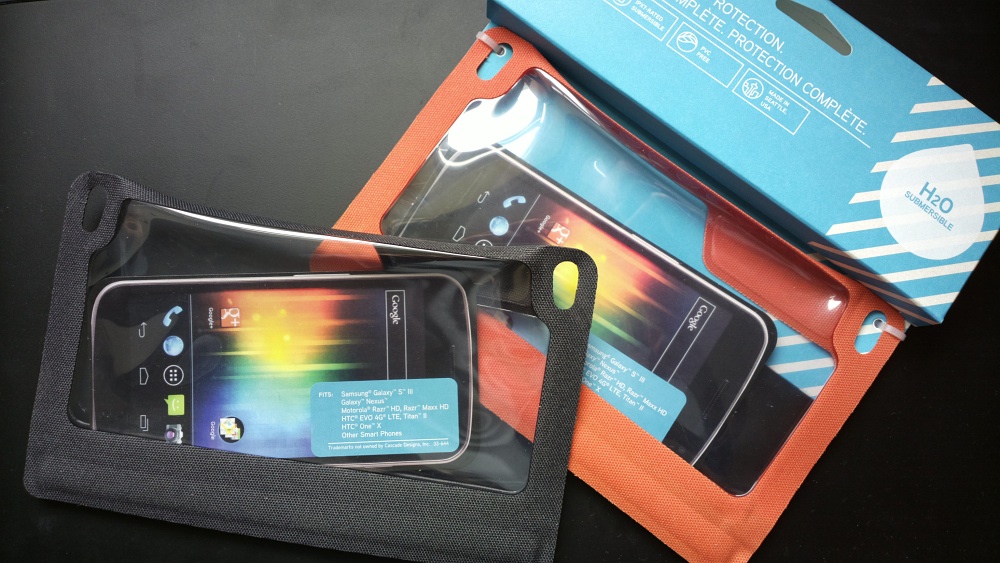 Shown above with the dummy Galaxy Nexus shapes in card....

The biggest issue I had with the eSeries 9 actually concerns the packaging - note the cable ties holding the cases to the cardboard back. These are very, very tight and I found it impossible to get scissors in to cut them. I ended up incising in with a very sharp craft knife, but it's a tricky procedure and the knife slipped, resulting in the top right lanyard hole on the grey/black case having a slice right through it (which you can see if you look very closely in the photo, to the right, bottom of the hole).

I'd suggest that Cascade Designs rethink this, lest more people end up with lanyard holes that aren't complete holes or, worse, lose a finger or two...

The eSeries design itself has a multiple ridged ziplock design. You line up the two edges and press together at one end, working your way along. It's the same principle as a freezer bag, but with much stronger materials and with several ridges rather than just the one. As you'll see later, this renders the case totally waterproof, capable of withstanding immersion 'for up to 30 minutes' at up to 1 metre depth. 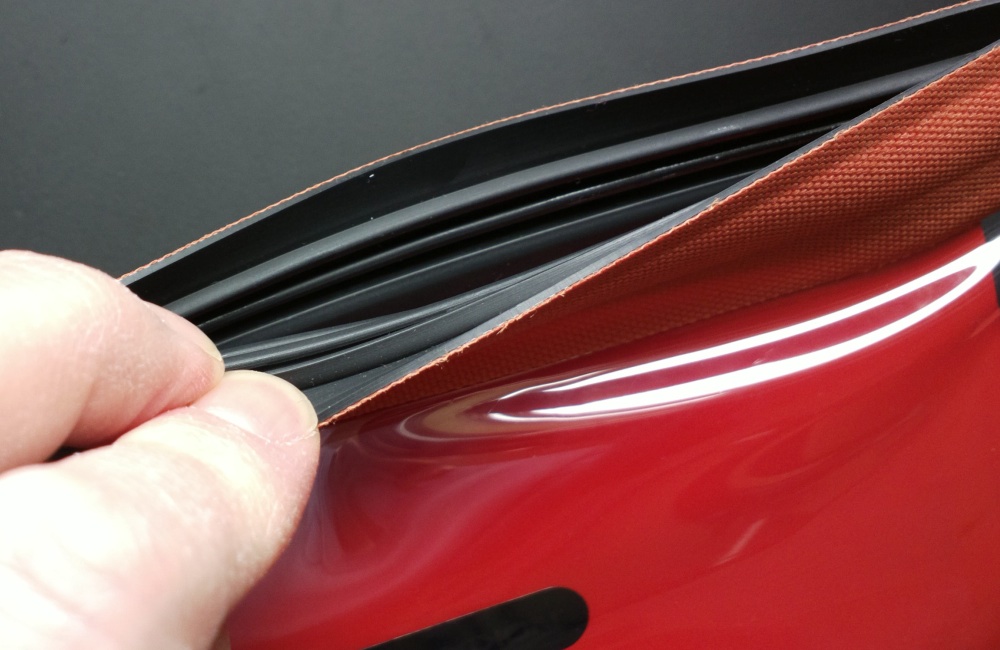 The case frame material is 'PVC-free 600D polyurethane-coated polyester and clear urethane', it's grippy to hold, seems tough and is light. Getting the smartphones into the cases was easy enough, though the Lumia 920's grippy exterior did need a little wiggling to get it into position past the also grippy inner plastic. Getting the phones out again, after the water test below, was almost as easy, though with the possibility of a few drops of water in the ziplock grooves, you do have to be careful if you're paranoid about water getting onto your phone! 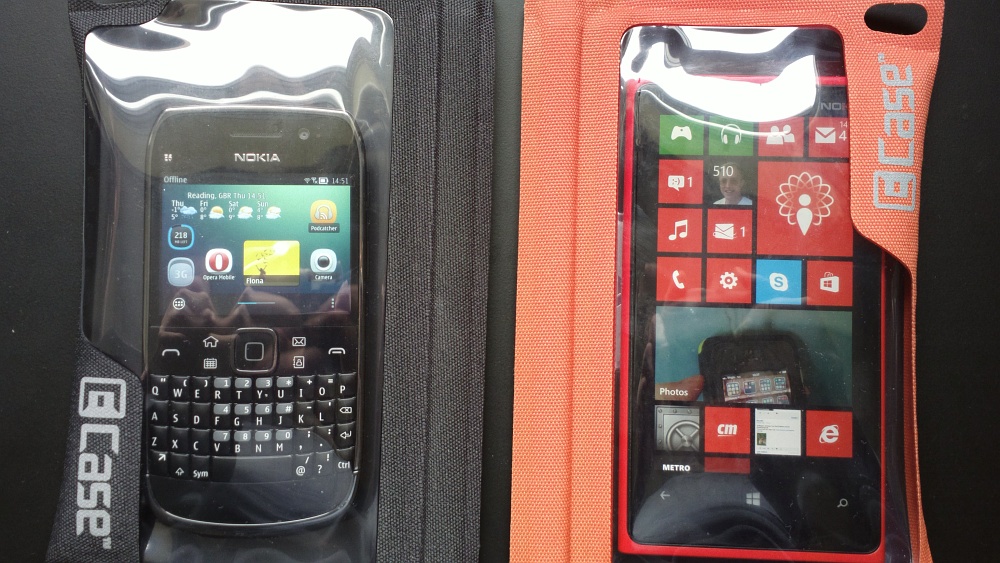 As you'll see below, there's a little space either side of the smaller Nokia E6 - again, the eSeries 8 case would probably be a better 'fit': 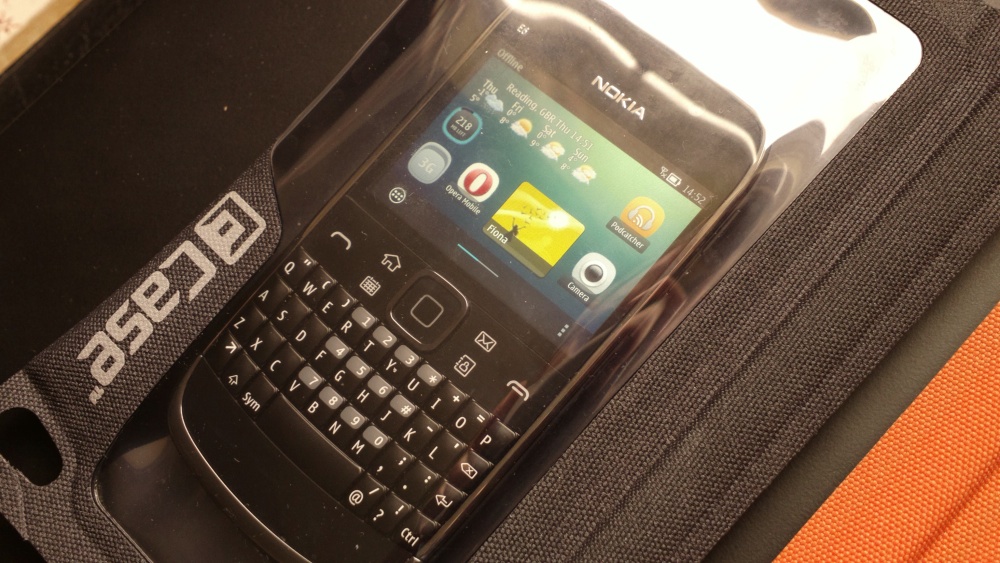 The Lumia 920 fits rather splendidly, with the phone's side keys available through the vertical right/end panel. You just lose a few pixels at the top right of the display - the E-Case logo is all very well, but I'd have thought they could reduce it slightly and give users more of the window that's usable. The alternative is to reverse the case and have the logo on the back, which might be what the designers intended but somehow feels 'wrong'. Your mileage will, as they say, vary here.... 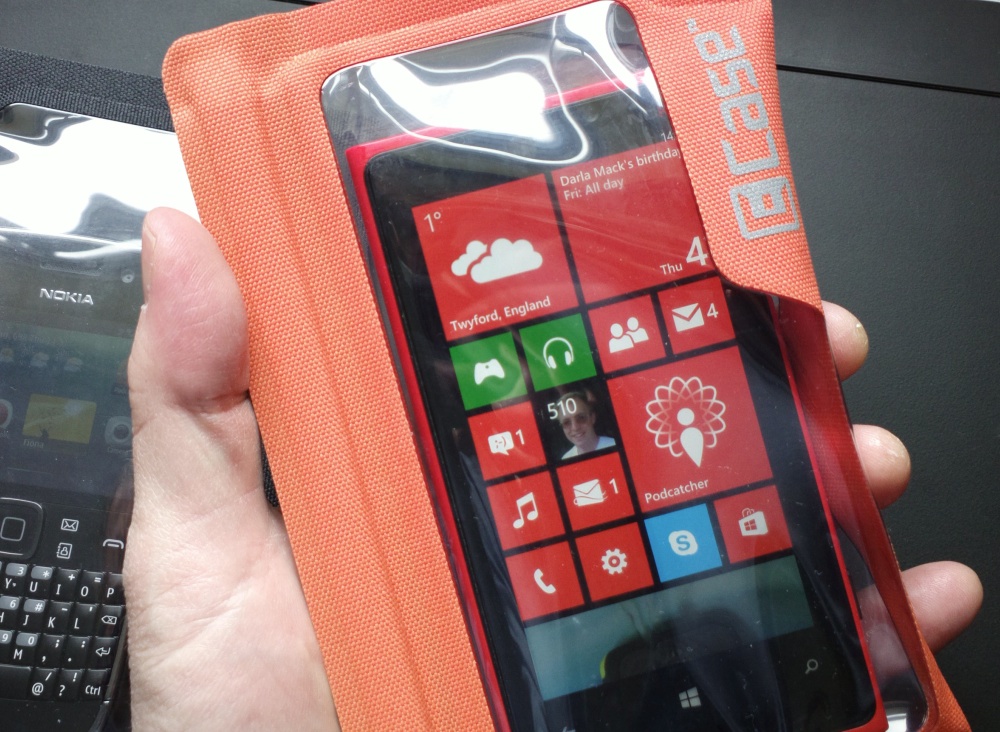 Of course, this being a submersible case, there was only one thing to try - sealing up the ziplocks, risking my precious hardware and plunging each case underwater. Not having The Gadget Show's budget (they'd have taken the cases canoeing in Bermuda for a week, lucky chaps), I made do with the bathroom sink, but the principle's the same.

I held each case under water for five minutes, during which time I was able to interact with the E6 to a large degree (physical keyboard and d-pad) and the Lumia to a limited degree (the capacitive screen is negated almost entirely by the conductivity of the water itself!) 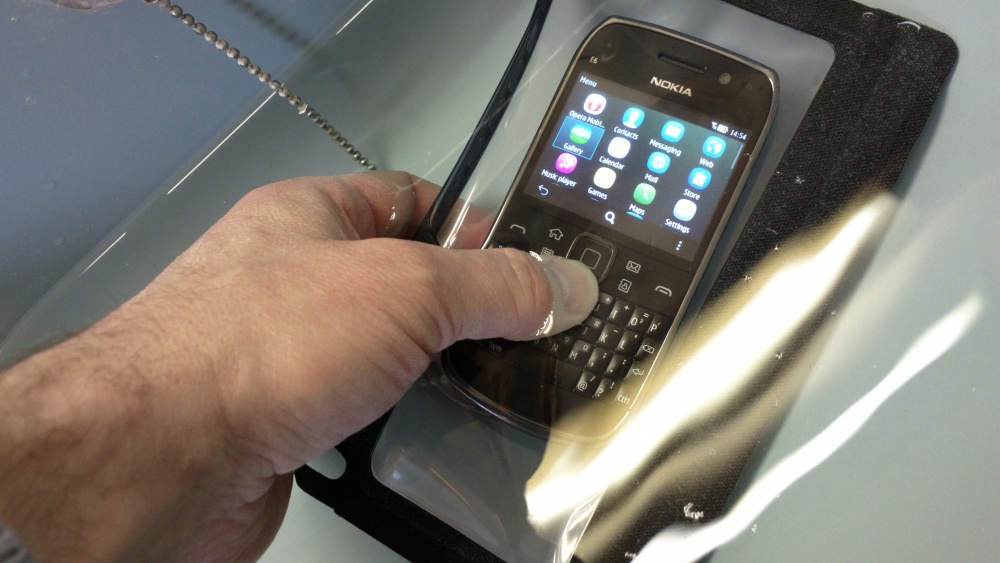 I mentioned above an underwater use case - this is typically for using camcorder functionality. With the plastic relatively clean, it's possible to go into the Camera app and start video recording going, and then submerge the case, with video capture still going. After filming, you'd bring the case out of the water, wipe it clear of standing water and then stop the video capture. Neat, and perfect for documenting your next scuba dive? 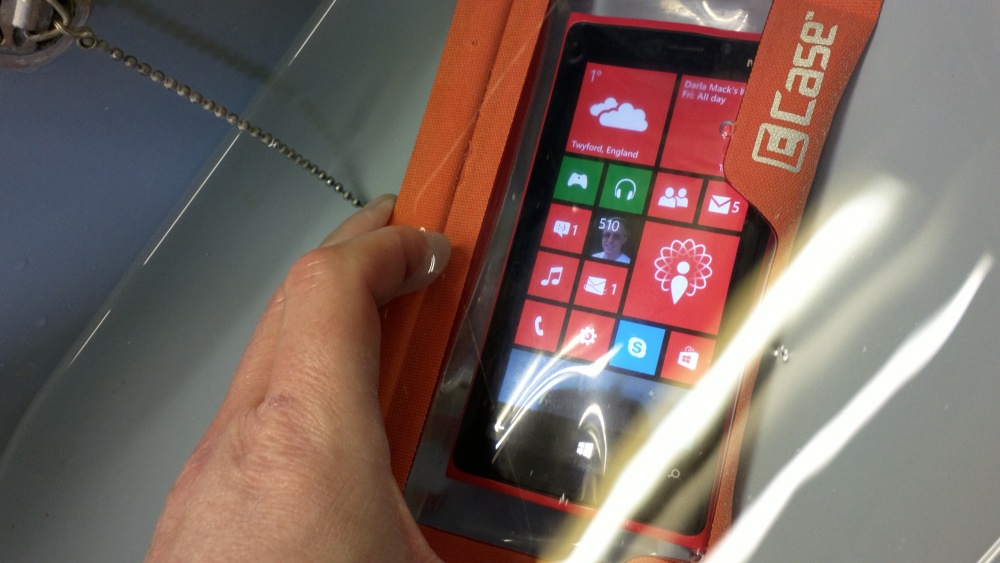 Overall, I'd rate the E-Case eSeries design as excellent - tough and attractive, and not too bulky, unlike the Beach Buoy design, which had a bit too much bezel and material to fold away if you wanted to pocket or 'bag' the case (e.g. see the promo video below).

Other than the packaging's cable-tie 'snafu', your biggest issue with the eSeries 9 case will be where to actually buy one... E-Case's designs have limited distribution outside of the USA, though they do seem to be expanding. I found all the sizes and colours available for order here and also here (hint: click on the drop down to see the colours and sizes), so at least you can get something organised for your next outdoor excursion, but I'll add to this paragraph as and when I find out more details of a larger supplier.

In the meantime, I'm well and truly sorted for the UK spring (you know, rain and wind), the UK summer (rain and drizzle) and for the various trips to the beach (again, rain, wind and drizzle, plus sand)! Recommended.

PS. E-Case do have a promo video for the eSeries, which may be of interest, embedded below: