Ask anyone the biggest name in consumer computer chess and the answer will come back 'ChessGenius'. It's available for every single platform, old and new (this is its debut on Windows Phone), it's been around for well over a decade, the chess engine it's based on has won ten (computer) world championships and it'll thrash you unless you happen to be a grandmaster. And even then you might struggle. Happily, there are options here to make it less forgiving of us lesser mortals...

I suppose, before starting, I should state my level of competence to review a chess game. I'm no novice and have read several chess books, playing the game on and off for the last 40 years. I did once take grandmaster John Nunn to about 30 moves and 45 minutes, but that was (ahem) when he was playing a dozen of us at the same time....

But I'm no chess wiz, it seems I lack the imagination to be brilliant at the game - I can play strategically and avoid making silly mistakes, but I don't have the forward thinking and ultimate skill to win against good players. Ah well, there's always tech writing to fall back on...(!)

Though there are extras (such as setting up a particular position, for analysis), ChessGenius is at heart a chess game, where you pit your wits against Richard Lang's award-winning chess engine. And then you lose. OK, on the easiest skill levels, ChessGenius has been programmed by Richard to deliberately make mistakes(!), so that, as a chess novice, you feel like there's a possibility of winning.

The rest of the time, you'll be losing, but don't feel too disheartened. Chess is, and has always been, a mental battle and a struggle to improve. In other words, just by surviving longer and playing matches against an entity stronger than yourself, you'll learn and get better. And therein lies the challenge, the 'fun', if you like. 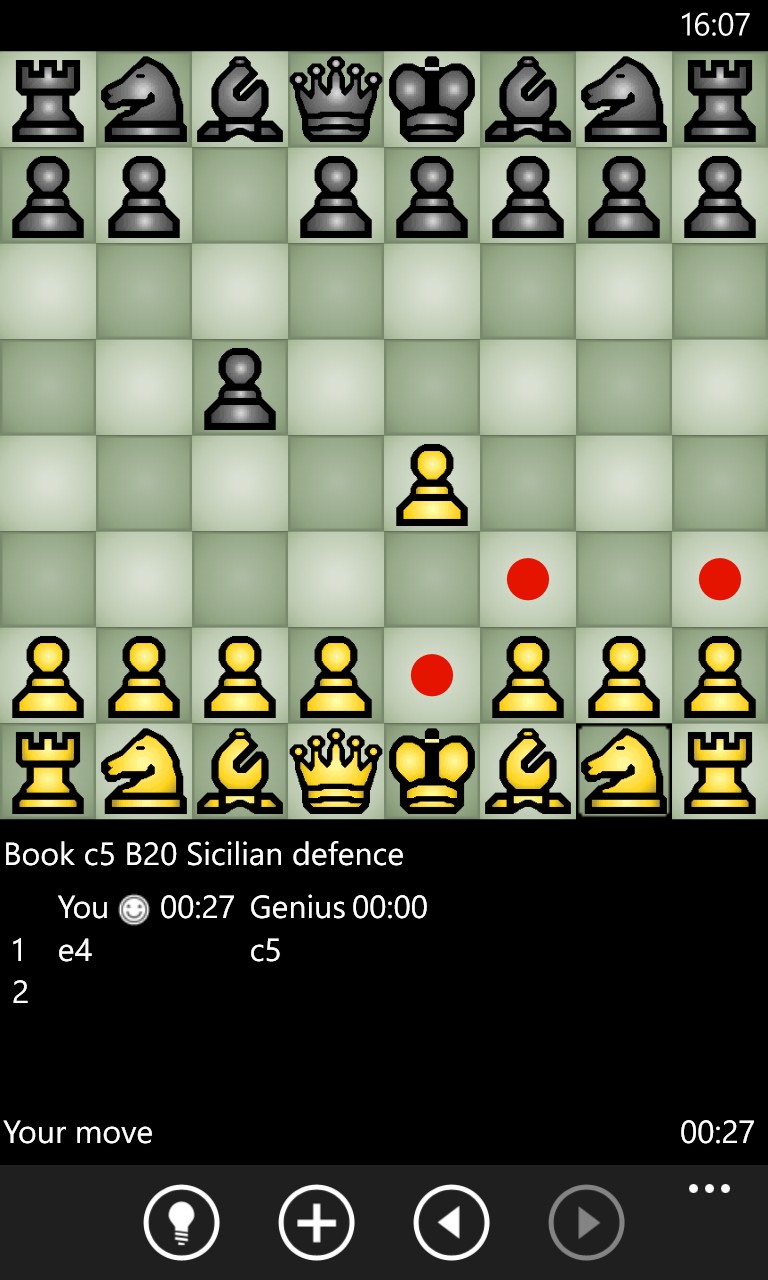 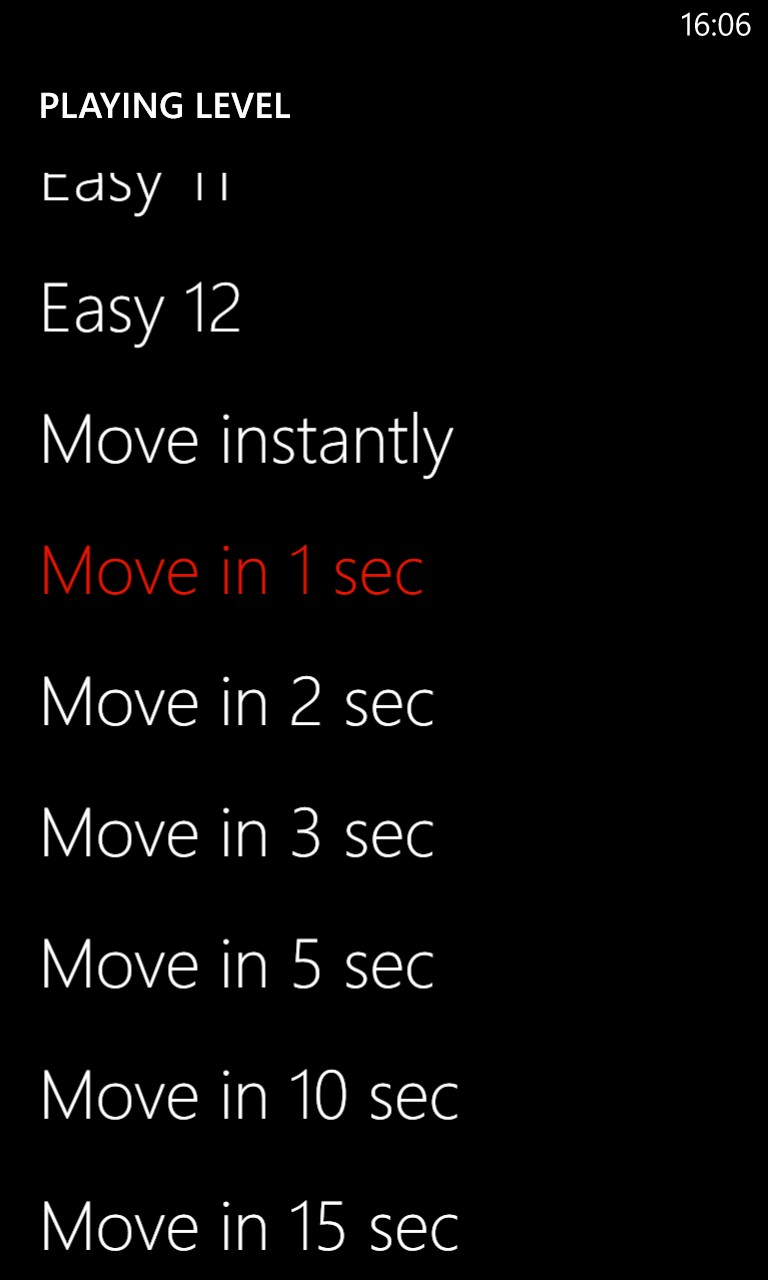 Getting started, showing the display of legal moves for any piece that's tapped, prior to dragging it to one of these positions; choosing a playing level - all these are available in the trial version (up to 20 moves)

Note in particular some of the menu items within a game - ChessGenius is extremely flexible in how play is organised and doesn't get upset in the slightest when you 'cheat'. Well, not so much cheat as treat the game as a learning exercise. Taking back moves which you later feel were mistakes that led to your downfall, swapping sides and saying to 'ChessGenius', "Go on then, you have a try with my pieces and position!" for a bit, and so on. Again, the aim is to stimulate the old grey matter and to learn, learn, learn. 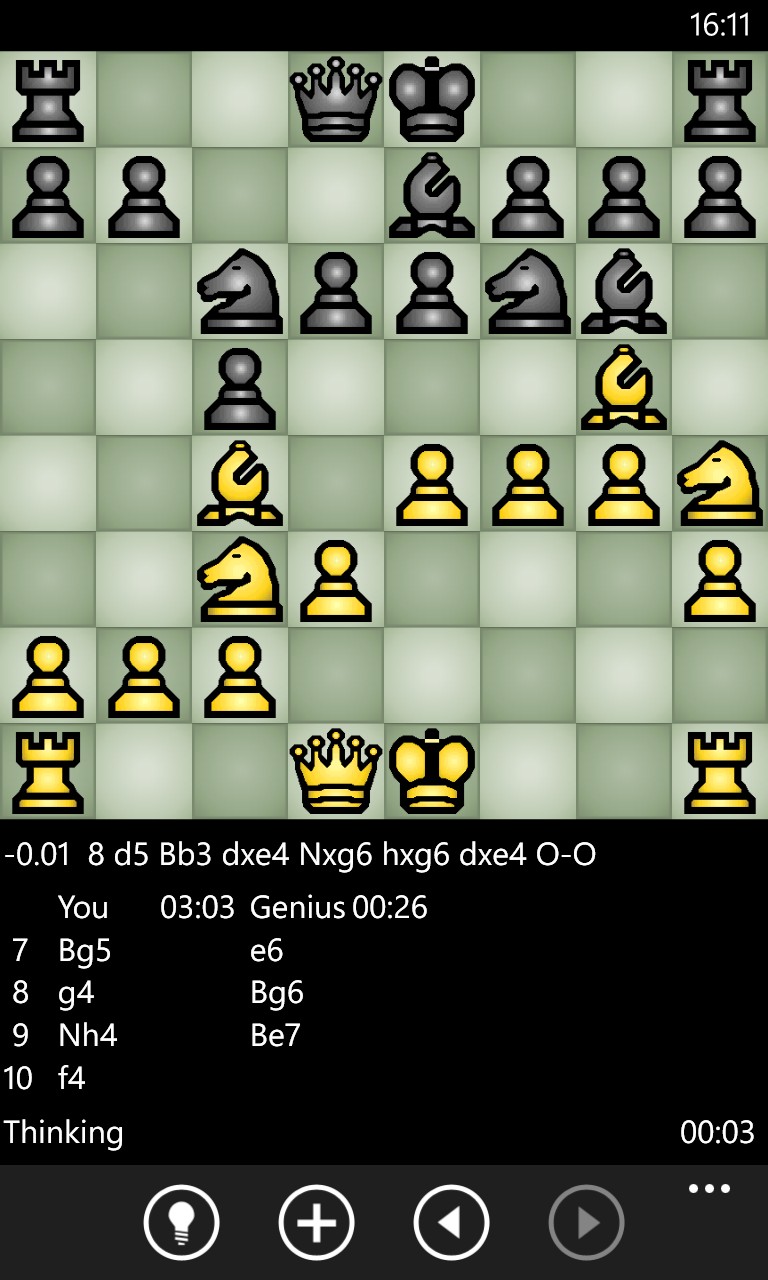 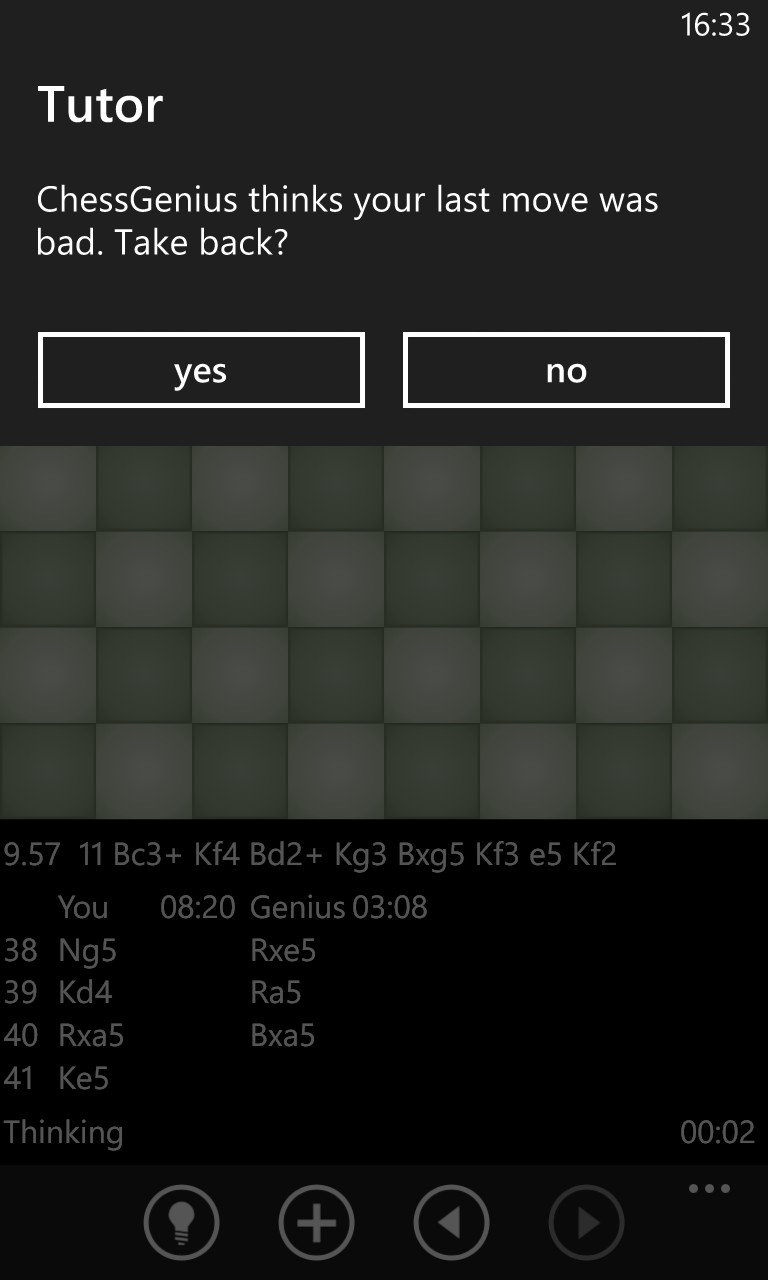 A game well and truly in progress, finely pitched, I think; if you play something truly terrible then you're prompted to reconsider - very helpful!

Which is not to say that ChessGenius's cosmetics have been ignored. There's a very healthy choice of several different board and piece styles, plus a sensible 'dark' mode for the main move notation window, which will help a lot with battery drain during long gaming sessions on AMOLED screens and still looks stylish on LCD ones. 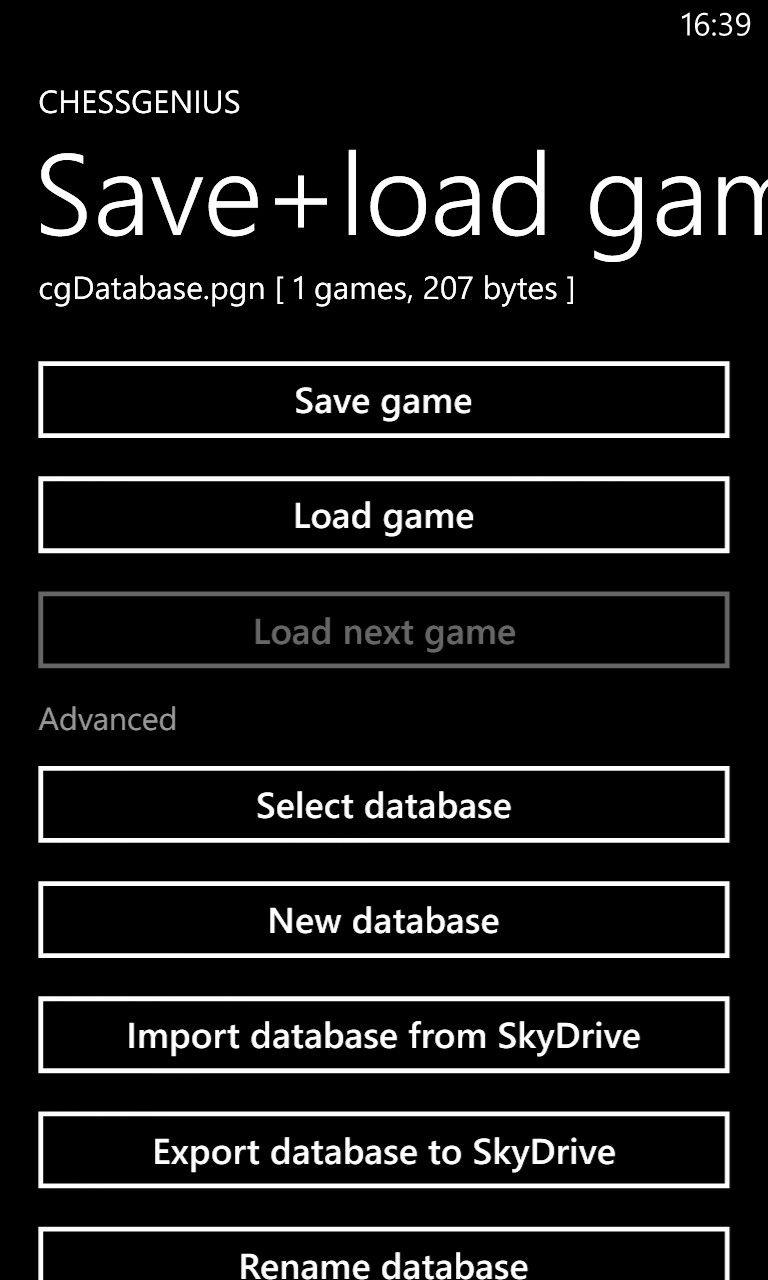 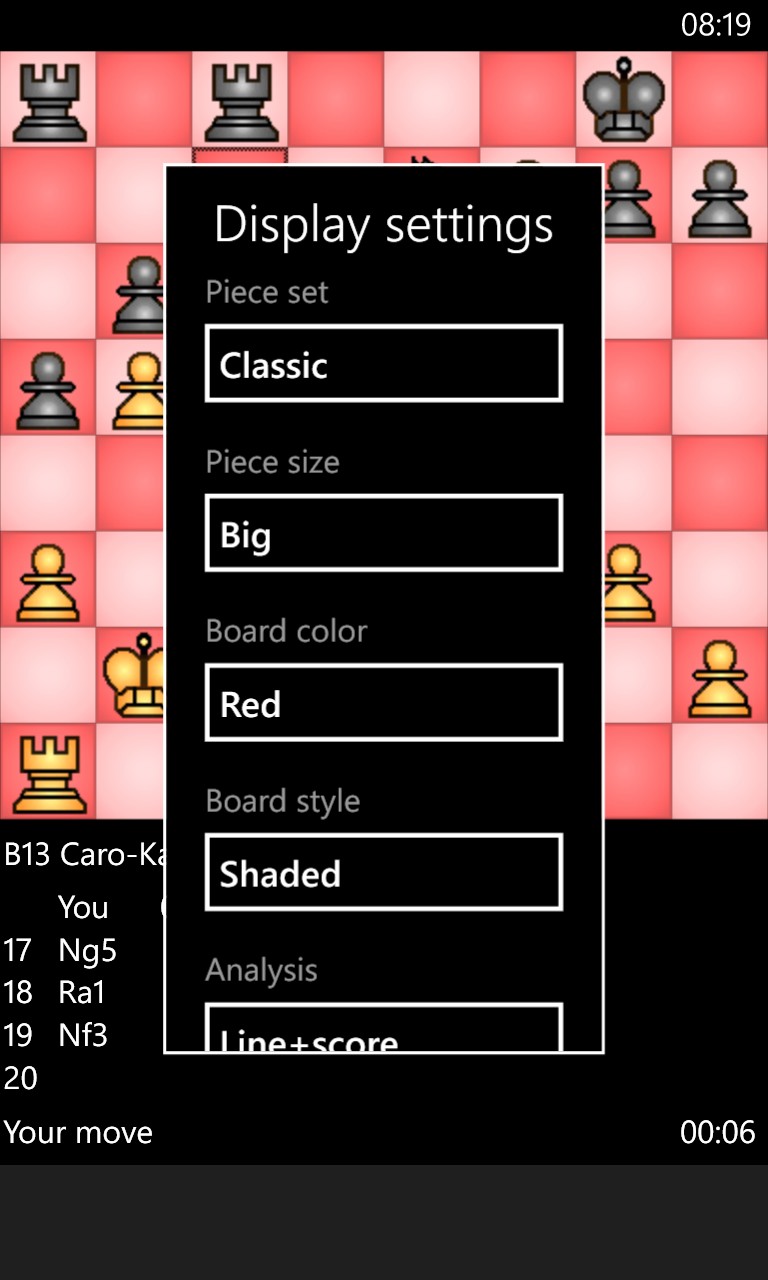 About to import a previously saved game in PGN format from SkyDrive; playing with the many cosmetic settings...

The other critical setting, of course, is how strong ChessGenius is. As mentioned earlier, there are a number of 'Easy' levels, designed with mistakes built in, simulating human players, and then we move on to the real meat and drink of the game - playing as well as it can. Although there are a number of timed games (where all your moves have to be completed withina certain time frame), a format common in chess clubs and competitions for obvious reasons, I prefer to consider chess a purely mental challenge and not to have time pressure at all. At least not when the game's running on my phone and the title doesn't have to be 'out of the hall by 10pm'...

As a result, I felt happiest giving Chess Genius '5 seconds' per move. This was enough for it to give me a very strong game (I ended up losing every time) yet didn't involve too much waiting around at my end. There's a 'Permanent brain' option, which apparently lets the game think ahead even during 'my' turn, with an accompanying warning about this using extra processor and battery power - even with this on, the game still took its regular turn time, so the default of this being off keeps things simpler and more efficient, I think.

Interestingly, in the trial version of ChessGenius you get to play at the full range of levels, but after move 20 it reverts to instant moves, i.e. playing at a lower level - this is a very well pitched trial philosophy and ensures that the conversion from trial to full version comes at just the point where a player is really 'into' the game. 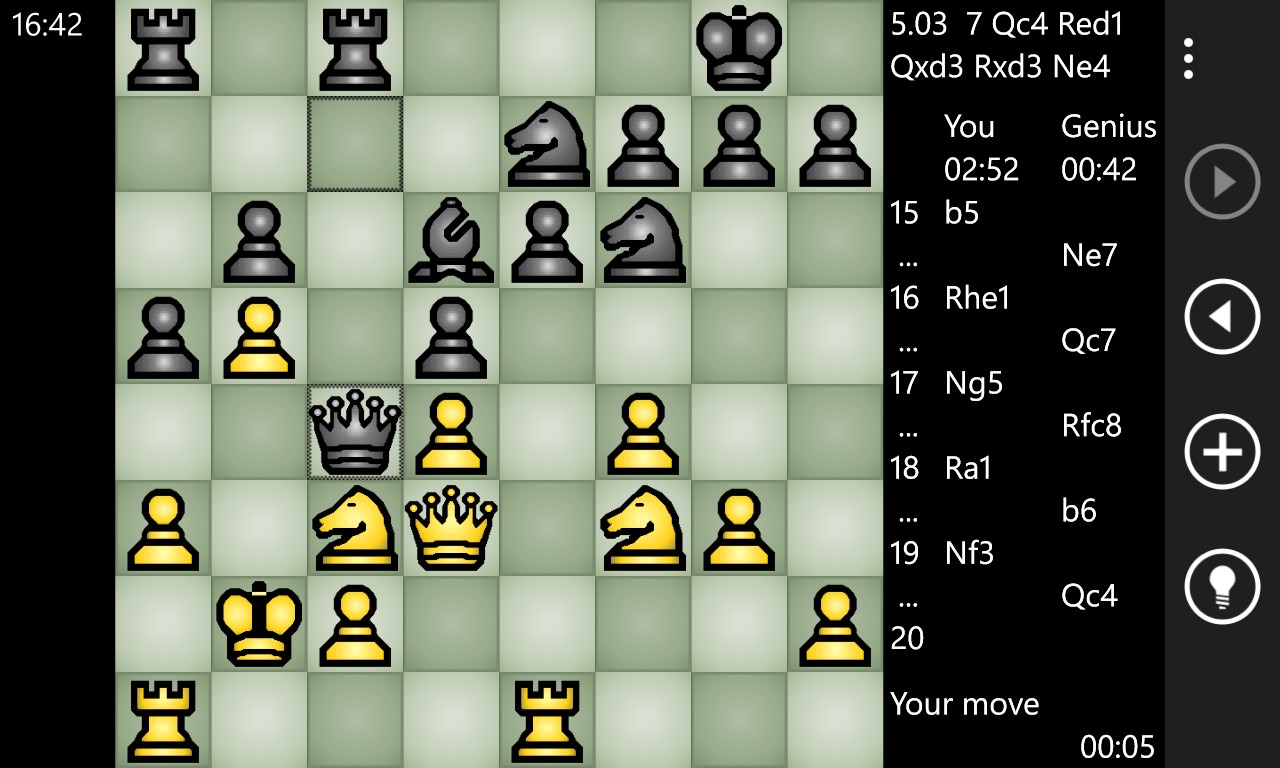 Playing in landscape mode works, but the layout doesn't quite work as well as in portrait...

A built in 'Tutor' mode spots when the game thinks you've made a bad move and offers the chance to take it back automatically. Accepting this gratefully and then working out where you went wrong is at the heart of the learning experience here.

'Analysis' is also built-in, showing animated lines of thinking below the main board - obviously the millions of possible moves that ChessGenius is considering can't be represented here, but the strongest lines are. For example, "1.03 05 cxd4 Nxd4 Nc6 Bb5"  means that ChessGenius thinks it is winning by 1.03 pawns, with a search depth of 5 moves, with the first few of those moves shown. When you think about it, this is pretty cool, to be able to, quite literally, see into the mind of your opponent. 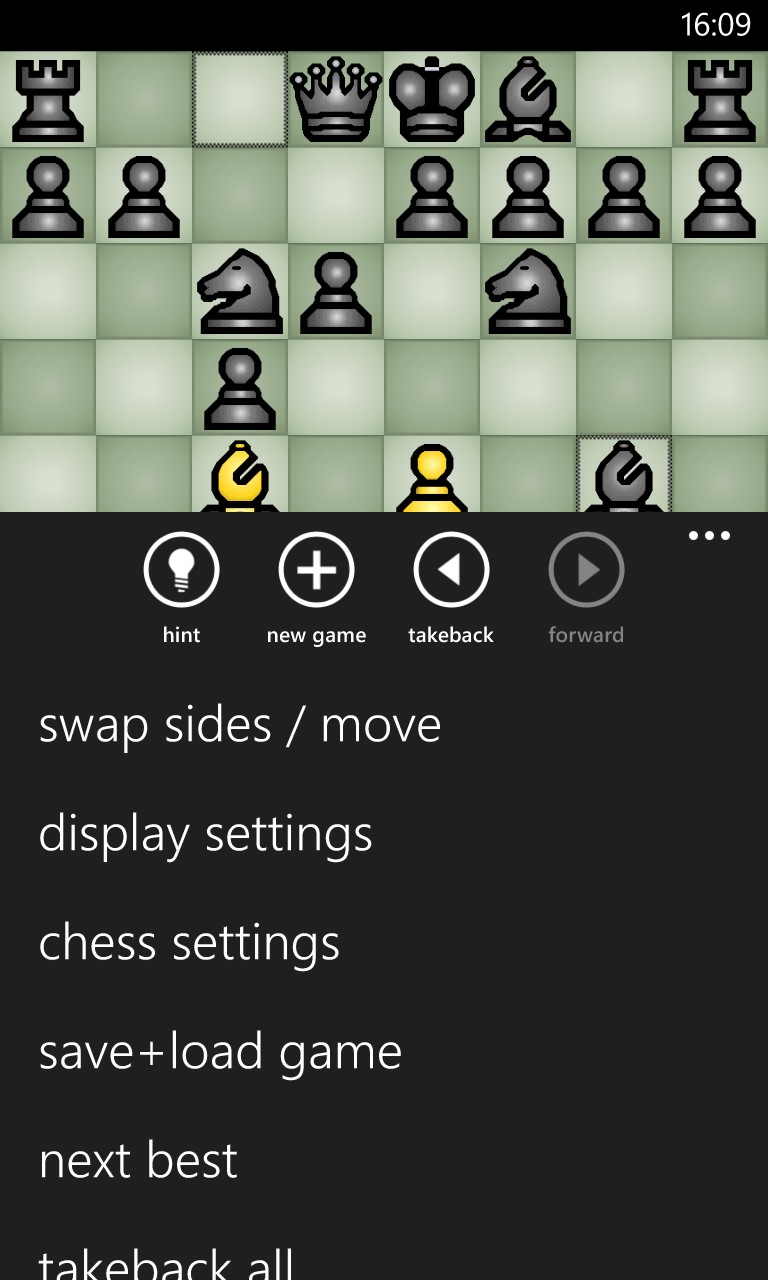 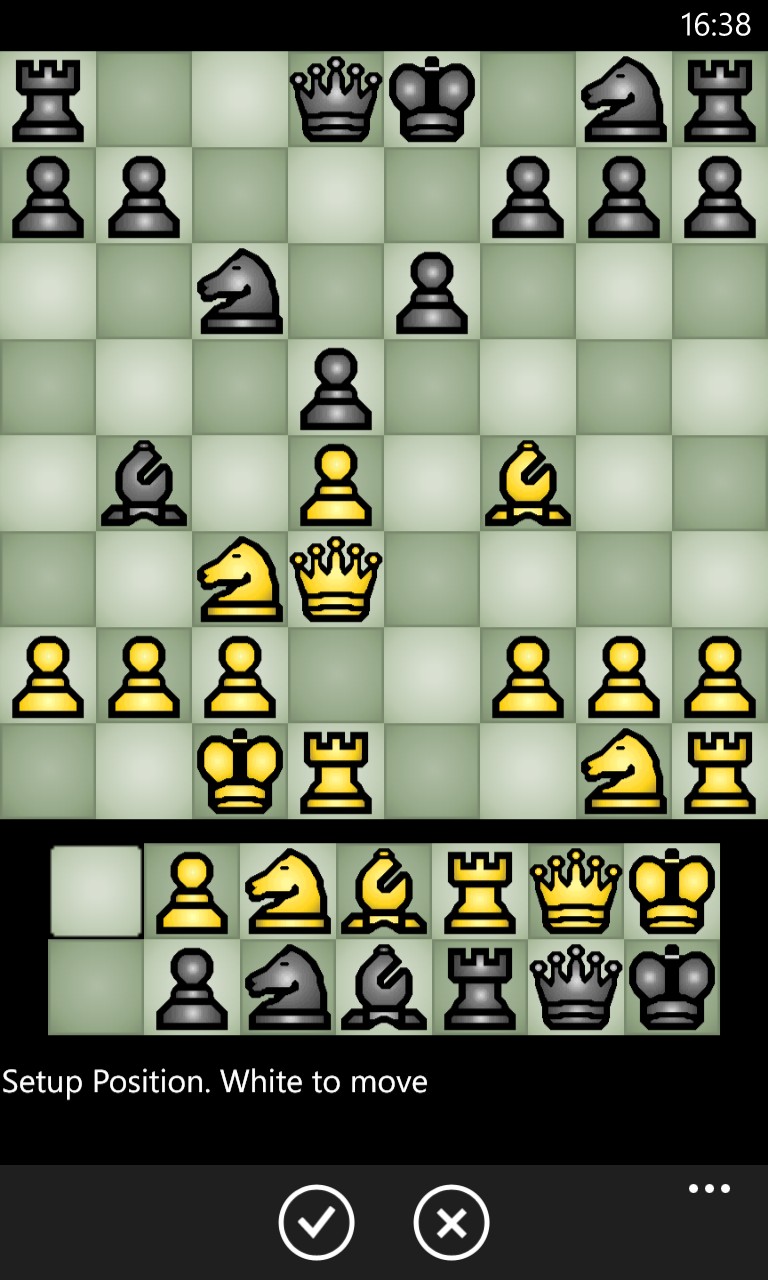 Exploring the many menu options and (right) setting up a position for the AI to analyse...

It's hard to go into every single feature of ChessGenius in a humble review. Suffice it to say that its maturity shows. In spades. Of special interest is that you can save games (to your SkyDrive) in the standard PGN chess format, used by chess applications across the world, plus (again going via SkyDrive) you can import other people's PGN-saved games. 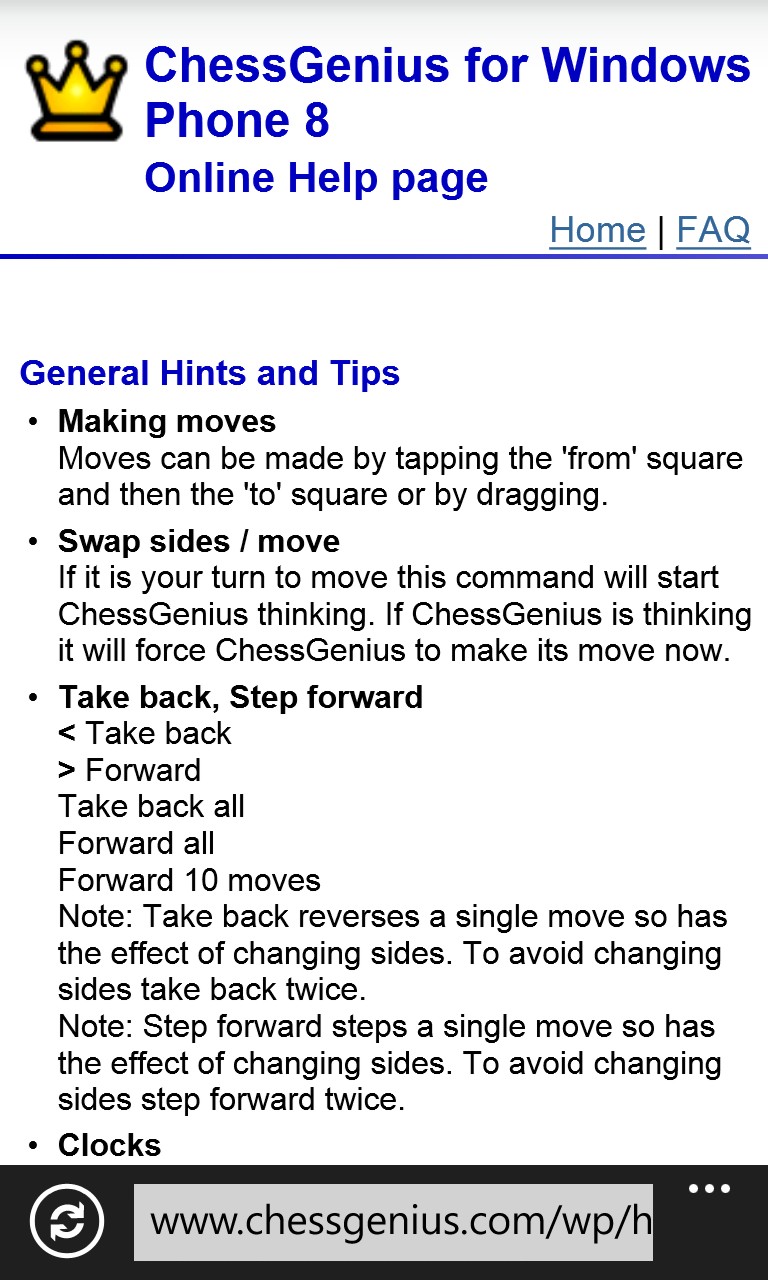 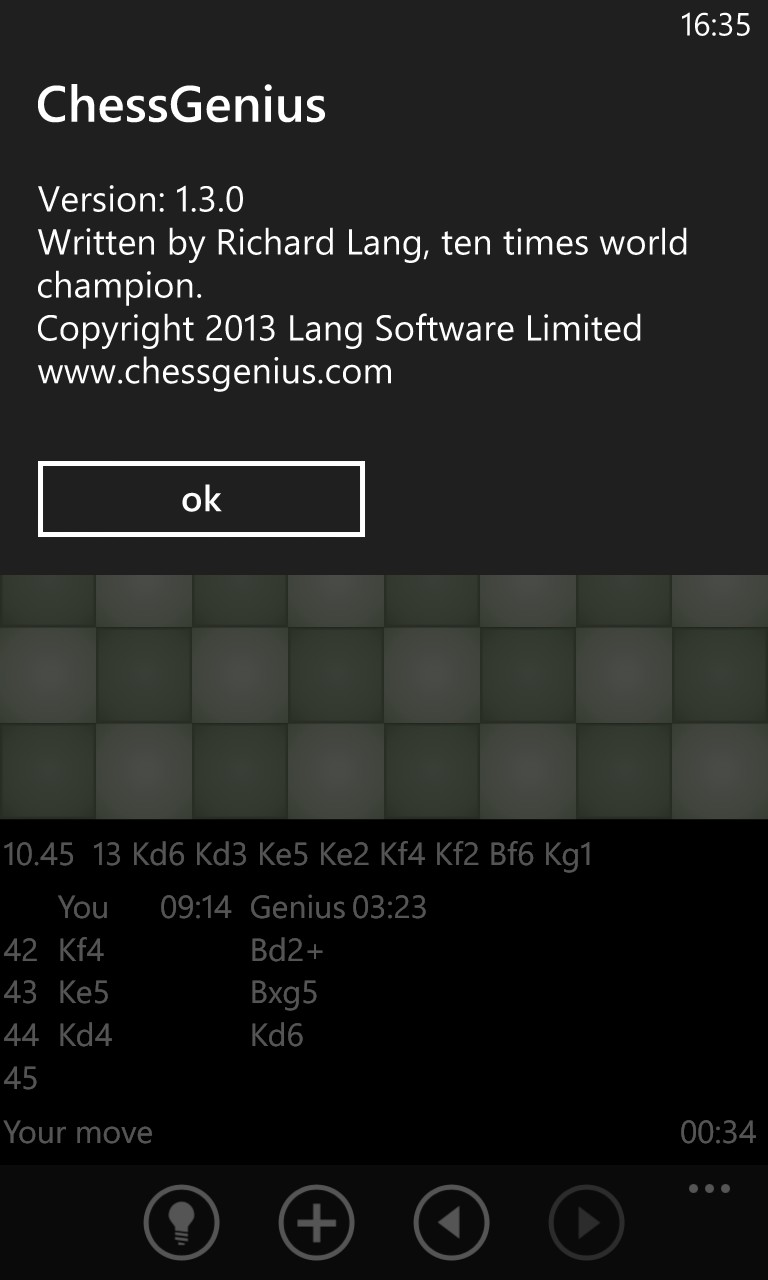 'Help' links through to a web page - a little clumsy, but at least it means that the developer (Richard Lang) can add new stuff very easily; Richard's pedigree - his programs have won ten times, by the way, we're not talking Kasparov-style individual wins(!)

If you have even a passing interest in chess, run, don't walk to ChessGenius in the Windows Phone Store. Enjoy the trial, buy the full game, and then say goodbye to your free time and hello to super stimulated brain cells!