Zeptolab's return to the world of Cut the Rope this month has been an interesting one to watch. Cut The Rope can rightly be considered a marquee game for a mobile platform, with its recognisable central character (Om Nom), well known gameplay, and attractive graphics. So Cut The Rope: Experiments is a welcome addition to Windows Phone, but it's not without some controversy.

Let's start with timing. Experiments has been available on Android and iOS for close to two years now, and it's only in 2013 that Windows Phone gets the title. In the meantime, iOS and Android saw the third major title, Cut The Rope: Time Travel, released last week. So getting Experiments for WP feels a little bit of a let down.

The other issue is in the cost of the full game. On release, it was priced at $2.99/£2.29, some three times higher than the other platforms. I suspect this is down to some nifty yield management decisions so the app development costs could be quickly covered, but unfortunately everyone not only noted the price difference to a two year old iPhone title, but also brought it up in the customer reviews on the Windows Store. A few days ago, the price dropped to 99 cents/79p. A nice concession, but still leaves questions from those who purchased the app at the higher cost.

These issues have got in the way of the game itself, and that's a shame, because when you look at Experiments, it's exactly what you want in a sequel. I enjoyed the original when I reviewed it (albeit having already played it on other handsets, the score was a slightly depressed 70%), and Experiments is more of the same. 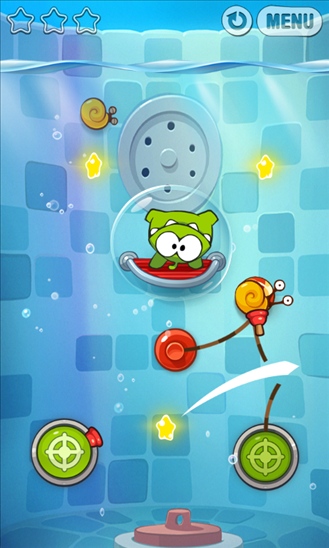 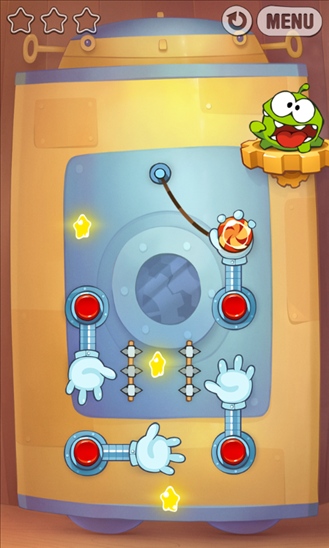 Your goal (just to keep this review complete) is to swing the piece of candy around a level, with the ultimate goal of getting the candy into the mouth of Om Nom, no matter where it is in the level. If you can grab the three bonus stars that populate each screen, then so much the better. To be honest, that's where most of the challenge is - getting the candy to Om Nom is easy. Getting the stars without dying (by touching a spike, or falling off the screen), is not an easy task.

So this is where the careful sequel must tread. Deliver the same experience, with enough of a twist to be distinctive, but not enough to kill off what made the original special. Experiments manages that in two areas. The first is by bringing the 'Doctor' into the equation to increase the story telling nature of the game - as you progress through the levels the tests being performed are given a back-story, which helps the longevity of the game.

The second addition is in the tools on offer to move the candy around the level. As well as the ropes to cut and air puffers from the first title, you have some new tools, including a wall sucker that can let a rope's attachment point be moved, grappling hooks to grab candy out of the air as it swings, and more (I wouldn't want to spoil all the surprises in the review). These are good additions in keeping with the first game, but certainly make the experience richer and more complicated.

That in turn impacts the level design in a good way. With more options to create more fiendish paths, Zeptolabs have made some cracking levels, and even though the play area can be quite small, the solution to a level is rarely obvious, and it feels that there is always more than one way to grab the three stars and get the candy to Om Nom. 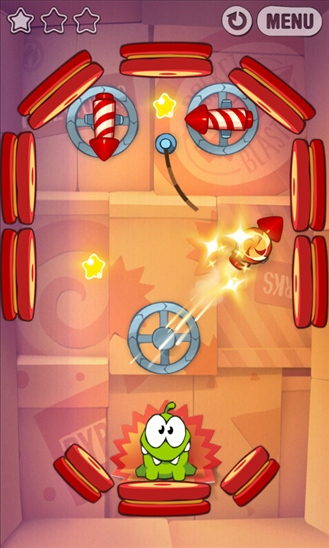 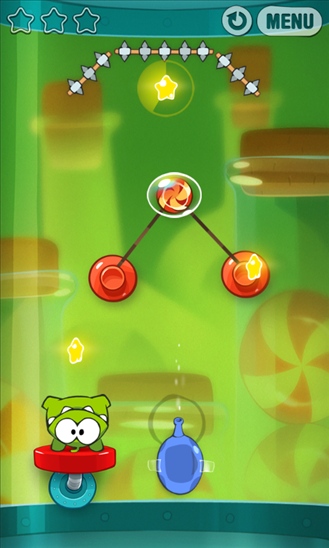 Controls are touch based and simple to use - cutting the rope is a swipe of your finger over the rope, and to use the new toys in Experiments you simply tap to activate or deactivate them as required. Because of the size of the graphics there's no issue about accuracy or fat fingers, the app will be smart enough to work out what you are trying to do.

If there's one word I would use to describe Cut the Rope Experiments it is this... comfortable. The new items in the game are not so outlandish that they spoil the feel of the game, the new level design still feels a continuation of the first title, and the visuals and sounds, while given an extra digital polish, are as bright and welcoming as ever.

If you can put aside the issues of the two year wait (and the fact that the Windows Phone version does not have as many levels as the other platforms), then Cut the Rope Experiments is a great game. Perhaps I was a little harsh in the first review, so let's bump the score up a little to 75%, and hope we don't have to wait another two years to get Cut The Rope: Time Travel on Windows Phone.