So let's talk about Jetpack Joyride. If you've ever picked up a handset,  running another smartphone platform, with a handful of games, the chances are you'll have come across Jetpack Joyride. It's an infinite scrolling game, where you fly with your jetpack for as long as possible. Windows Phone is still playing catch-up in terms of the expected mobile games, so Halfbrick's arcade button presser is the latest 'historical' to get the Xbox Live branding.

Jetpack Joyride goes for a side view of the action, and with clean cartoon like graphics it feels very much like an Atari ST or Commodore Amiga 16-bit game from the nineties. The game starts, the distance travelled counter starts ticking, and even though you speed up throughout the game, or pick up speed boosts, the graphics never falter or frame skip. 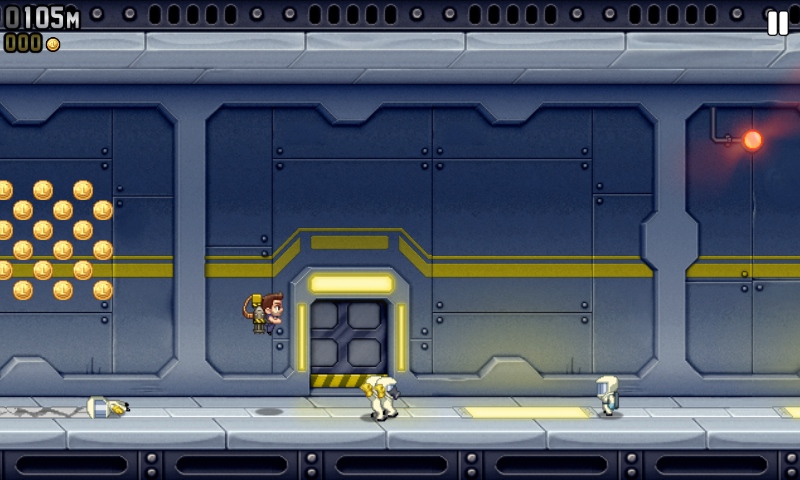 The controls are also slick. Or should I say control, because all you have is 'tap on the screen to fire the jetpack's thruster'. That's it. The grace in the control comes from a good set of default values around the physics... the momentum, the gravity, and the acceleration that Barry has to deal with as he flies down the corridors (Barry is who you control, the bloke who stole the jetpack). That's the key to a good endless game like this, finding the right values that give you graceful arcs and trajectories, but that are fast enough so fast reactions are needed, and you have just enough time to react to duck over or under an obstacle.

Along the way, you can pick up other vehicles for something different to do, and in the process gain something akin to an extra life. Once Barry dies, it's normally game over, but a vehicle will absorb one hit as it throws you out into the air with just the titular jetpack.

You'll spot the coins as well. While each run through the game will see you trying to get the maximum distance, the true scoring mechanism of Jetpack Joyride is the coin system. Pick up the coins, and spend them on pwoer-ups, new costumes, or gadgets that give you special powers while you play - for example, a pair of shoes ('Air Barry') that let you jump really high, giving you an extra boost as you take off from the ground. 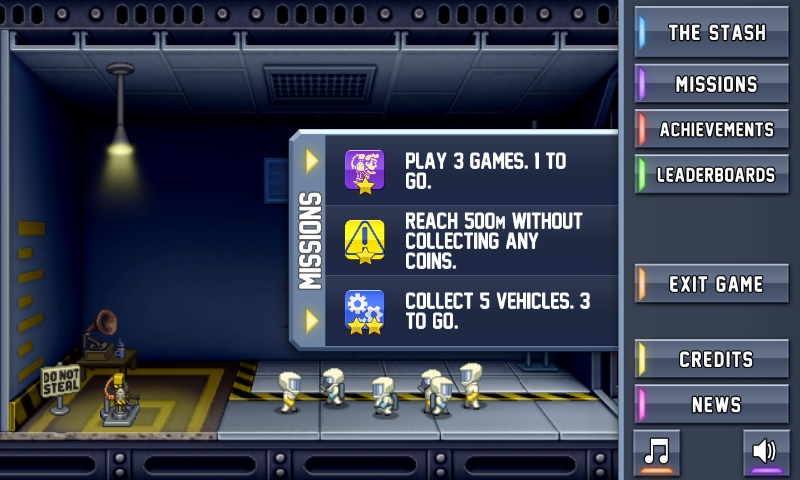 This gives Jetpack Joyride its longevity. As well as collecting them, there are missions you can complete which will give you a lot of coins. Missions such as: travel in 5 vehicles, rub your head on the ceiling for 300 meters, and more. You'll be looking to complete these to advance you in the game both on a 'You are at level 12' and on a 'do this to get more coins to buy the tin dog' sense. It's a wonderful concept, and the goals are set at just the right point on the difficulty curve.

And if you want to short circuit the process, you can buy a big stack of in-game coins using real world currency. I think that's a bit unbalancing, but for younger players it might be a good investment. What I would recommend is the 'counterfeit machine' at 99 cents / 79p, which will double the value of coins you collect in a game. Picked up 114 while playing? We'll credit the account with 228.

In essence, this is purchasing the game. Even though it's a free download,  anyone seriously looking to play Jetpack Joyride should pick this up. 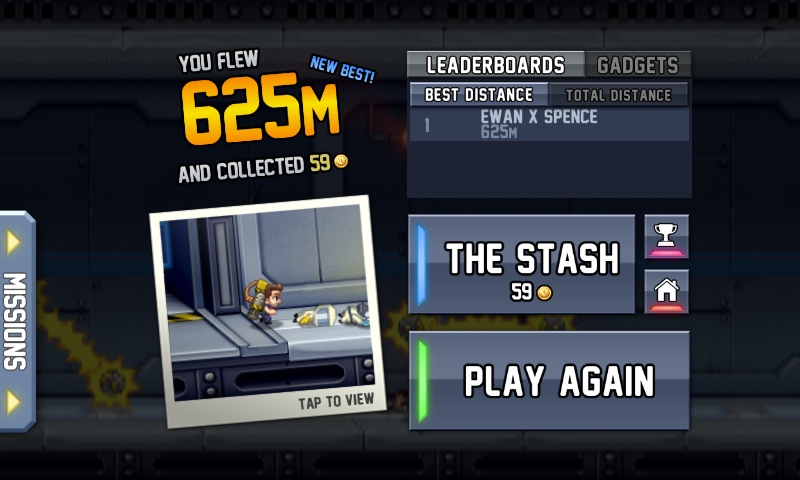 But behind Jetpack Joyride's simple gameplay and well thought out income stream, there lies a problem. To be precise, a few bugs that cause the game to (temporarily) forget what purchases you have made, how many coins you have collected, and what achievements you have made.

Returning to the game to discover you have no coins left, but have mysteriously purchased all the jetpacks available is soul-crushing. Come back later, and some other strange combination is offered to you.

A good coder should default to a safe position when errors happen. Unfortunately, Halfbrick have not done this.

I suspect this is down to the game having issues with the synchronisation of the save data on the Xbox Live servers. When the internet connection is not available, you do not have access to all your toys. This seems like the wrong way to handle a saved game state on a mobile device which cannot guarantee an internet connection.

I did manage to reset my stats by attempting to purchase the counterfeit machine again - at which point I assume an alternative bit of code kicks in and refreshes the data in a slightly different way, but the process left me feeling apprehensive and uneasy. 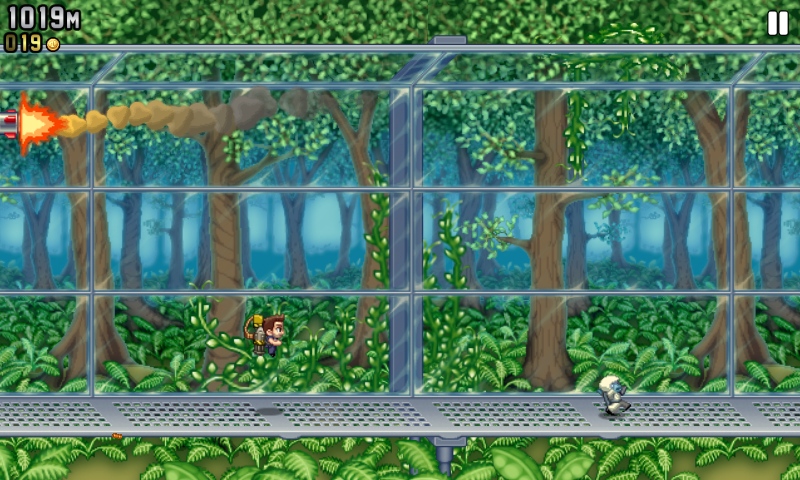 While the gameplay of Jetpack Joyride is fantastic (as it should be, after all the testing iOS and Android devices have done on versions before the Xbox Live build), the handling of save game data is not forgiveable in my book. I'll give this a hesitant recommendation because nothing has actually been lost in the long run - it's just that I can never be sure it will be there when I open up the game on my handset.