It's Tetris! It's free! What can go wrong? Quite a lot actually. Electronic Arts' Xbox Live release of Tetris Blitz last week gave Windows Phone another prominent name in the Windows Store. So why do I feel dirty every time I play it?

Let's start counting up the issues that I have with Tetris Blitz.

First up, the control system. I know that trying to slide a tetronimo into place, spin the orientation, and then drop it quickly to the gap is a tough process on a touch screen. it can be done, but it takes time. If you do want to work that way, then Tetris Blitz will allow you to do so, but be aware with a game limit of just two minutes you're not going to get a lot of action. 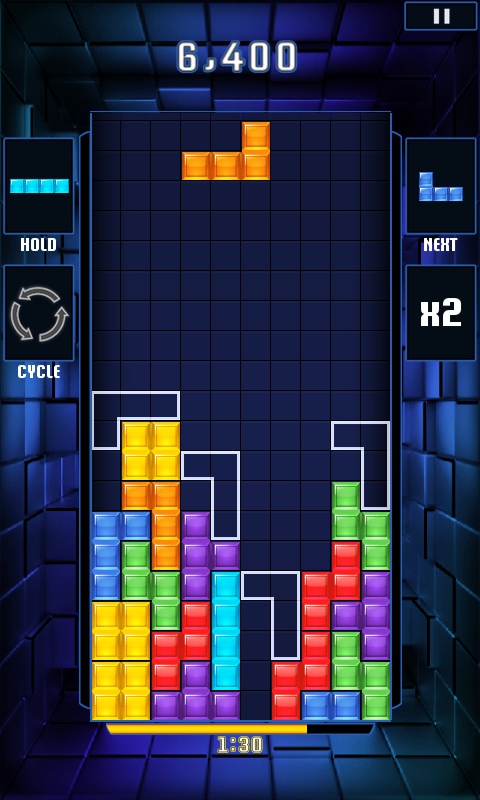 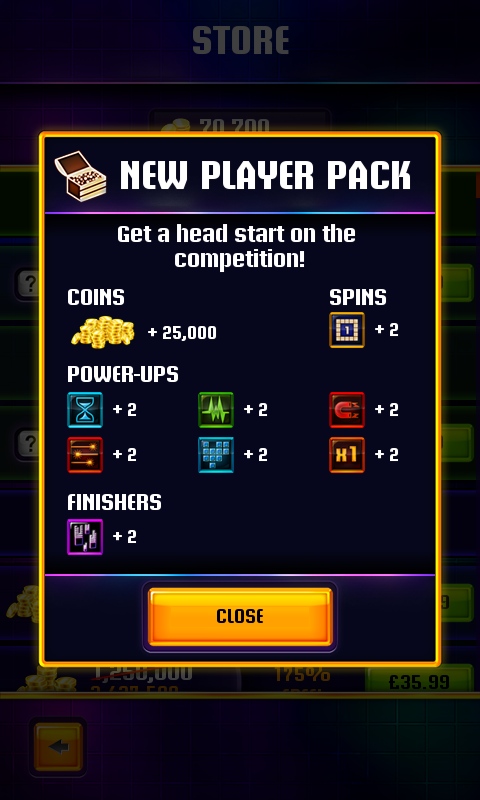 Which means the alternative system, which is far faster to use, is the one to go for to get the store. By giving you a multiple choice of locations to tap on, and have the piece automatically placed there, you certainly get a lot more speed, but you are also locked into the choices presented to you. Four times out of five that's fine, but if you want to follow a different building strategy to the built in code, you'll have to manually place the piece and use the 'cycle' button on the side of the game grid to change the orientation - a process even slower that the regular controls, and of course you still need to spend time analysing the options presented in order to know that you need to change them.

There's strike one - to have a decent speed and to get through the two minutes, you need to play in the style of the developers.

Let's talk about the modifiers. It's possible to buy and use modifiers, so when a line is created with one of these sparkly blocks, you get an extra action. You might have a laser wipe out three lines, five seconds added to the clock, or all the blocks pulled to one side to help your growing playfield create lines. These have the ability to rapidly alter the playing characteristics of the game, and really have little to do with skill. If you get one, and build a line, they'll be used.

This is disappointing because Tetris Blitz is insanely focused on the score, so anything that changes the score radically is unbalancing. And Tetris Bltiz is very unbalanced with these power-ups. Chasing a high score? A boost is your only real option. 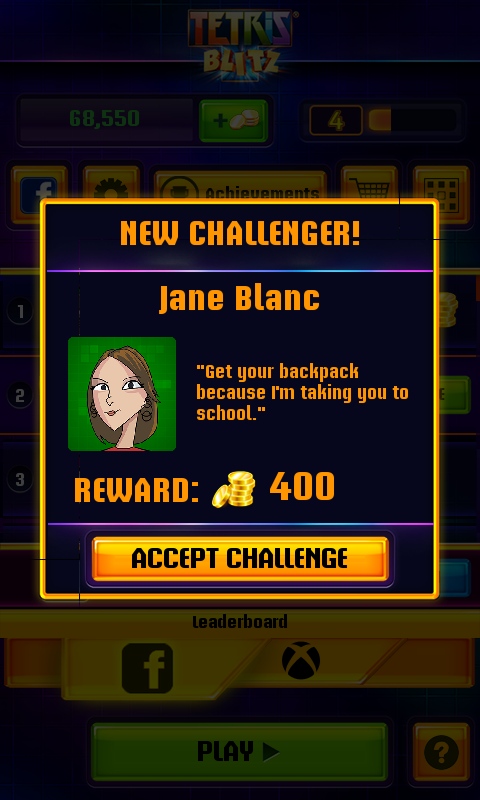 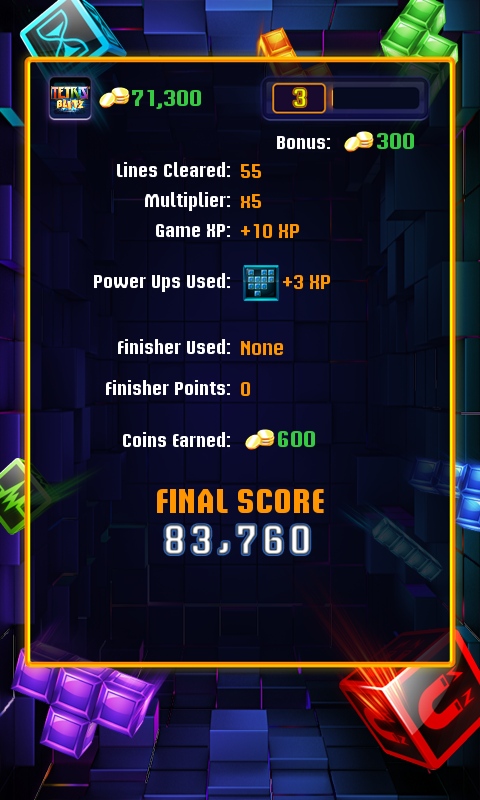 This is strike two. Even though this is still Tetris at the base, the changes required to play result in a different game. Now that strike might actually be a ball, and something you enjoy, but it's not quite Tetris. I want to earn my scores, not be handed them on a bonus plate.

The problem with the scoring boosts comes from the online component. Everything is measured by the high score against your friends. Progress in the game each week is on the basis of the high score table. So you can look at a score and you have no idea if it's done by skill or a lucky combo, or by buying the maximum three boosts per game that you are allowed.

Actually that's not true. Although I've done the majority of testing on a Lumia 820, I also installed Tetris Blitz on my Lumia 620 (so let out a tiny yaay, this title is 512MB compatible) with the intention of never using a booster, a finisher, or a special power during a game. It's not 100% possible, as the tutorial modes and first three games are full of helpful hints and 'you must try a boost here', so your high score is artificially inflated.

But after that I was able to resist the urge (at least on the 620) and lo and behold, it's almost impossible, even with a week of playing, to get close to 200,000 points. But racking up half a million? No problem if you add the boosts. All of this renders the high score tables from online almost worthless. Is that really a high score of skill, or just buying boosts? 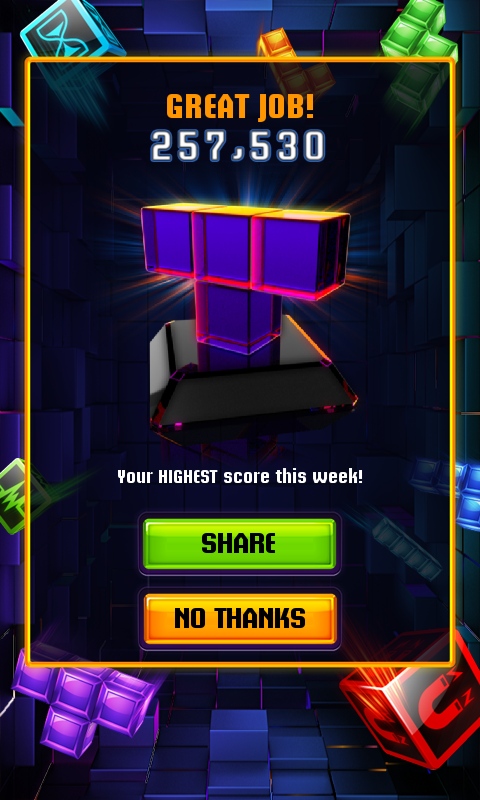 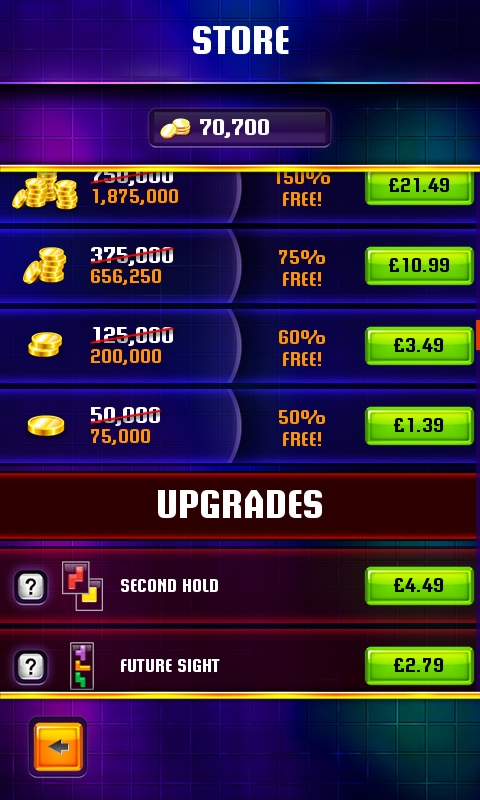 Tetris Blitz is brazen about all of this, and it's the cocky swagger of knowing that even if it is called out by some, this is 'Tetris' and it will still be downloaded by the metric tonne, and as long as 1% of people buy a boost package, then the developers will be in profit.

But there's so much to buy that it's crazy! How about the ability to see more than one tetronimo piece coming up? That function, which is part of the fabric of the traditional game, will cost you £2.79. Want to hold two pieces instead of one? £4.49. Remove the in-app advertising? £3.49. I'm up to £10.77 already and I've not even started on the limited use boosts (three shots of 'crusher' block for £4.49?) It's ridiculous.

Have a pure experience and never beat the high score you made in the tutorial move, or cough up and pay for the boosts, knowing that it's the only way to get to the top of the high score table... hoping your friends don't care that you bought your way there.

There's a really nice version of Tetris somewhere under here, and the basics of the game are all there - the two minute time limit, the frenzy mode you activate after twenty lines that is a genuine combo maker you can plan around, the bonus multiplier for clearing four lines in a drop - unfortunately it's all covered in a thick gloop of 'must take all your money' and 'pay big if you want to win big'. It's embarrassing, dirty, and Tetris deserves more than this.

It's a free download, have a look because there is a certain level of enjoyment. But the challenge is dulled because EA wants more money, and it'll use every sneaky trick to get it out your wallet.