Sometimes the best laid plans go astray - I'd planned a group test of the various photo-to-sketch utilities for Windows Phone, but it soon became apparent that one was head and shoulders above the rest. Ignore the naming confusion ('Sketch') and head for the one by thumbmunkeys, reviewed here. The results are somewhat... stunning, as you'll see below.

The concept is a simple one - snap a great photo and then use this as the source for a variety of software effects designed to mimic pencil, crayon and or 'scratch' effects, all in glorious monochrome. Don't be too sniffy about the idea, see the example at the bottom for an example of what can be achieved. It's.... art!

In this case Sketch for Windows Phone, offering the chance to take a photo 'live' or, more usefully, use a great photo from your 'media library', i.e. Camera roll plus any other photo albums that the OS gives you access to. 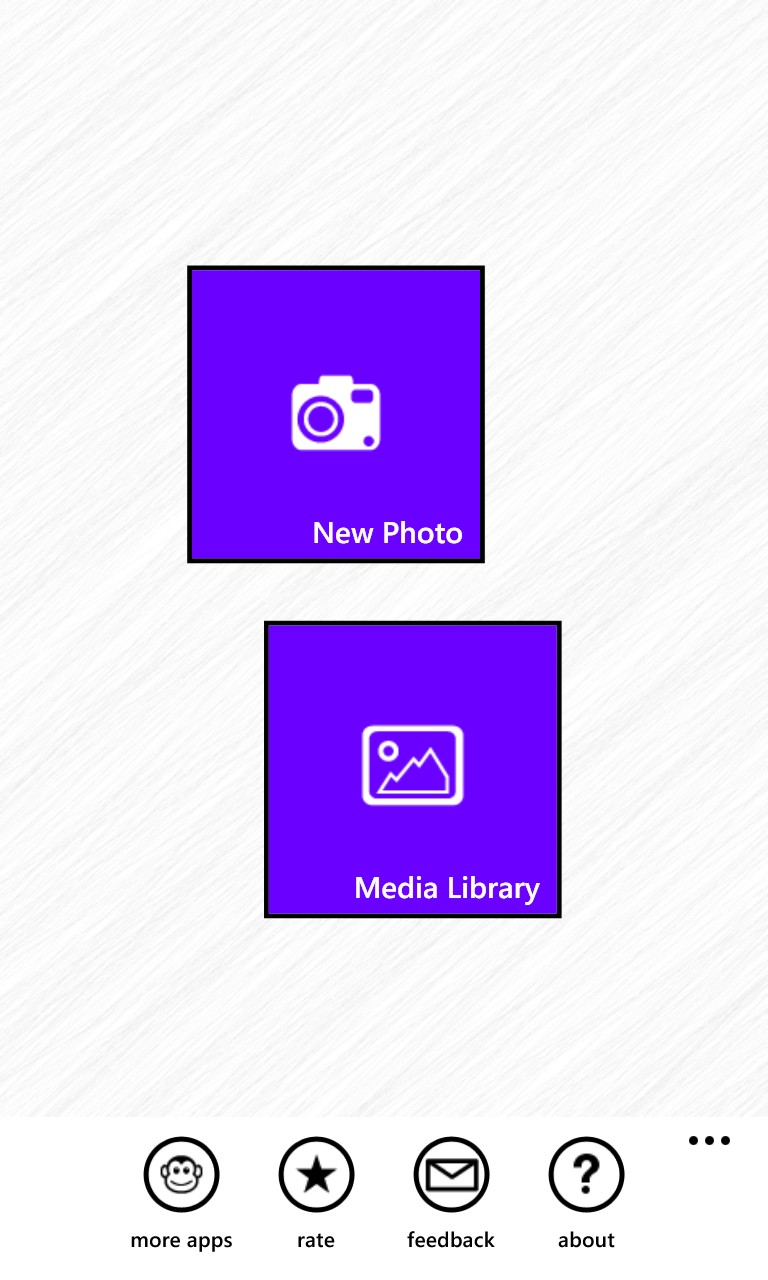 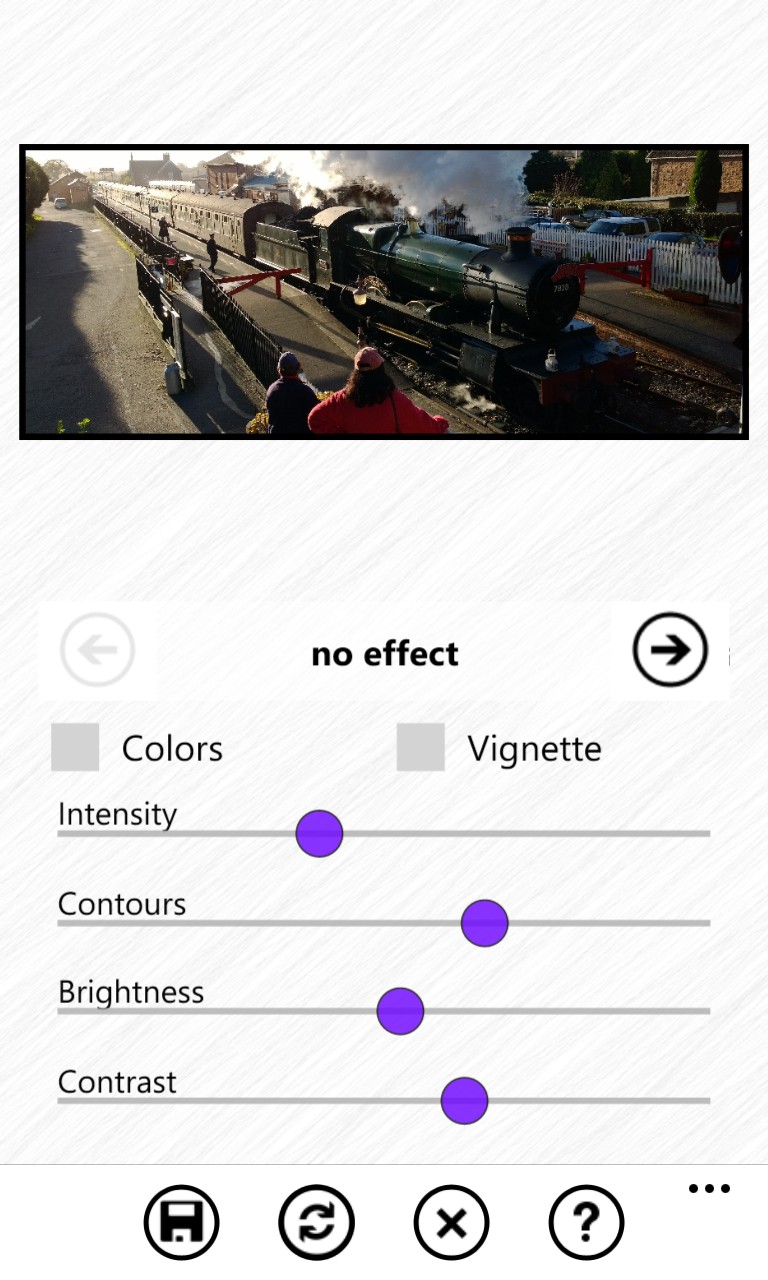 Having picked a likely (usually colour) photo, the interface is simplicity itself, just tap through each of the several dozen sketch effects, either in the small preview window shown here or by rotating the phone into landscape mode and using a higher resolution full screen mode.

Although not shown in this review, there's also the facility to add in subtle colouration by checking the on-screen box. But that's cheating - Sketch in its purest form is for producing something that looks like you spent hours drawing it with a pencil!

One delightful UI touch is that by swiping down within any of the sketch previews, the original colour photo is temporarily shown, so that you can see how the two images compare. 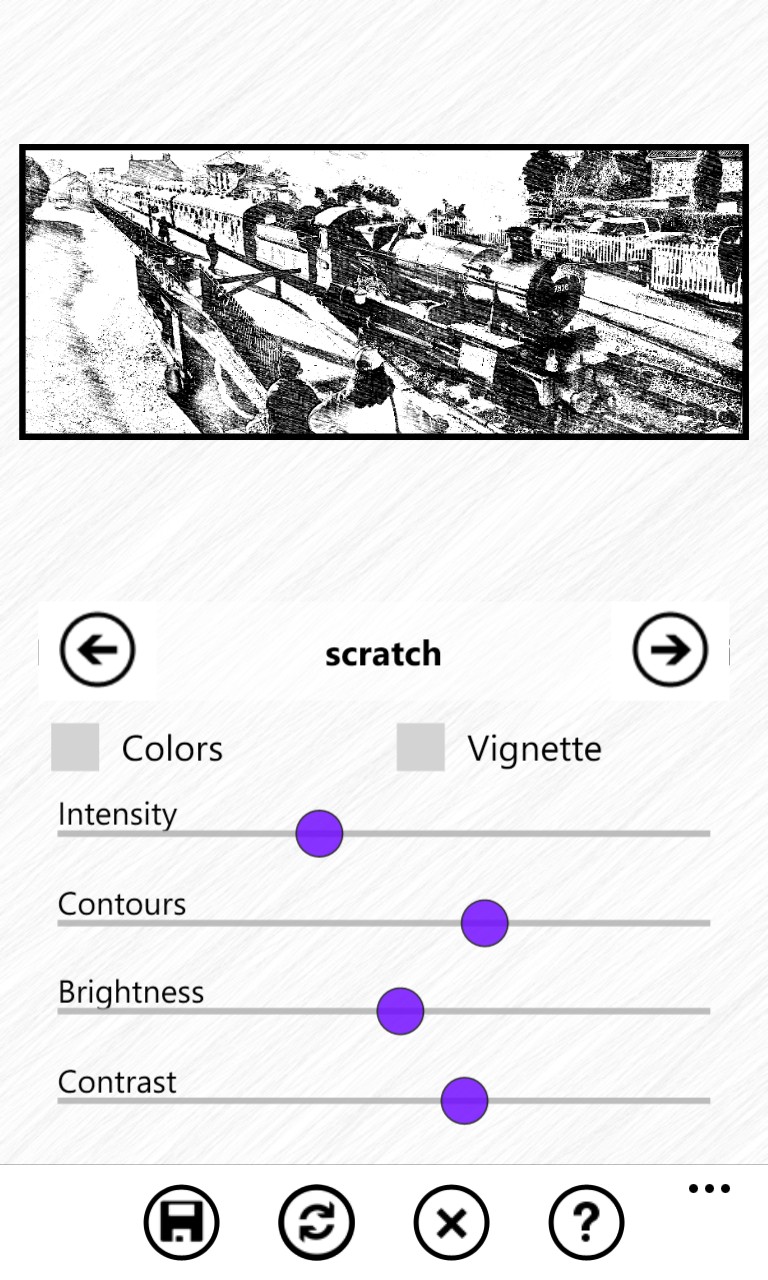 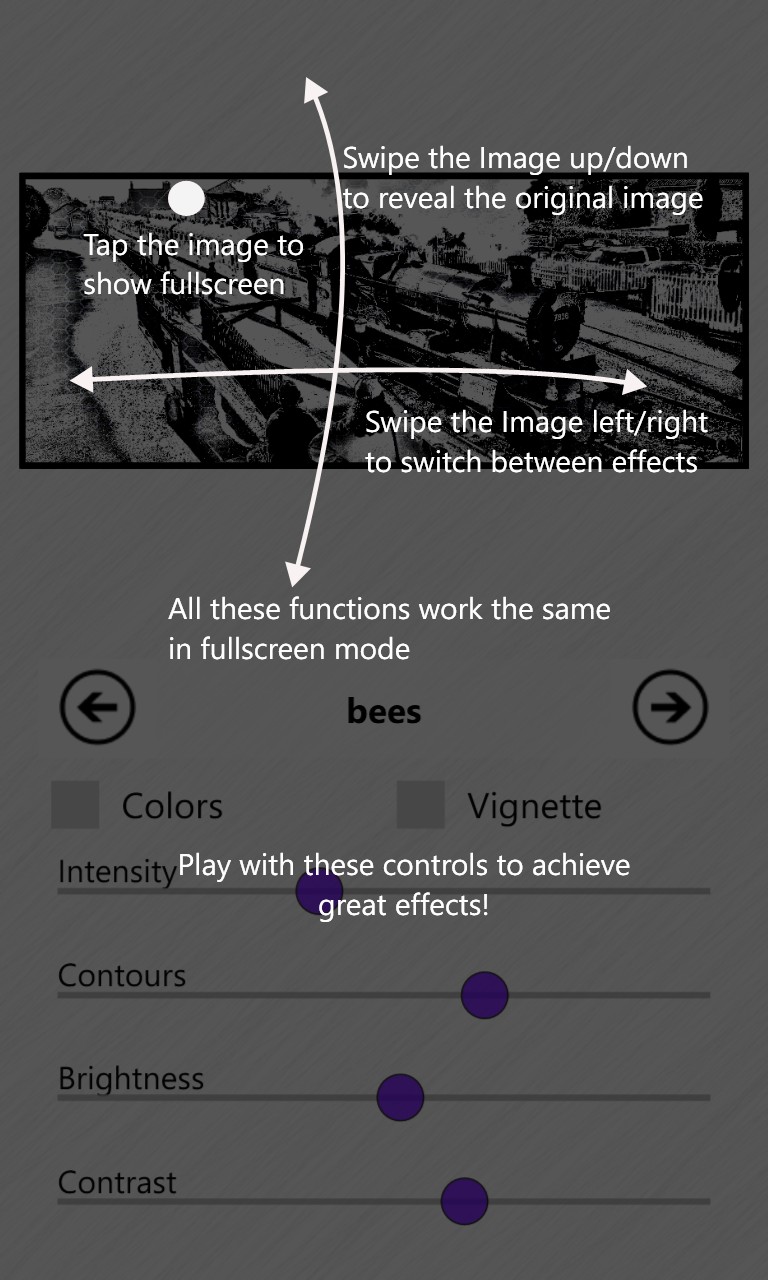 In addition to the many sketch effects, you can fiddle with the four sliders shown here - although there are no 'zero' detents, the 'reset' option on the toolbar restores the defaults, thankfully. In use, I didn't find that the sliders were that useful - the several dozen effects were enough of a choice in the first place. 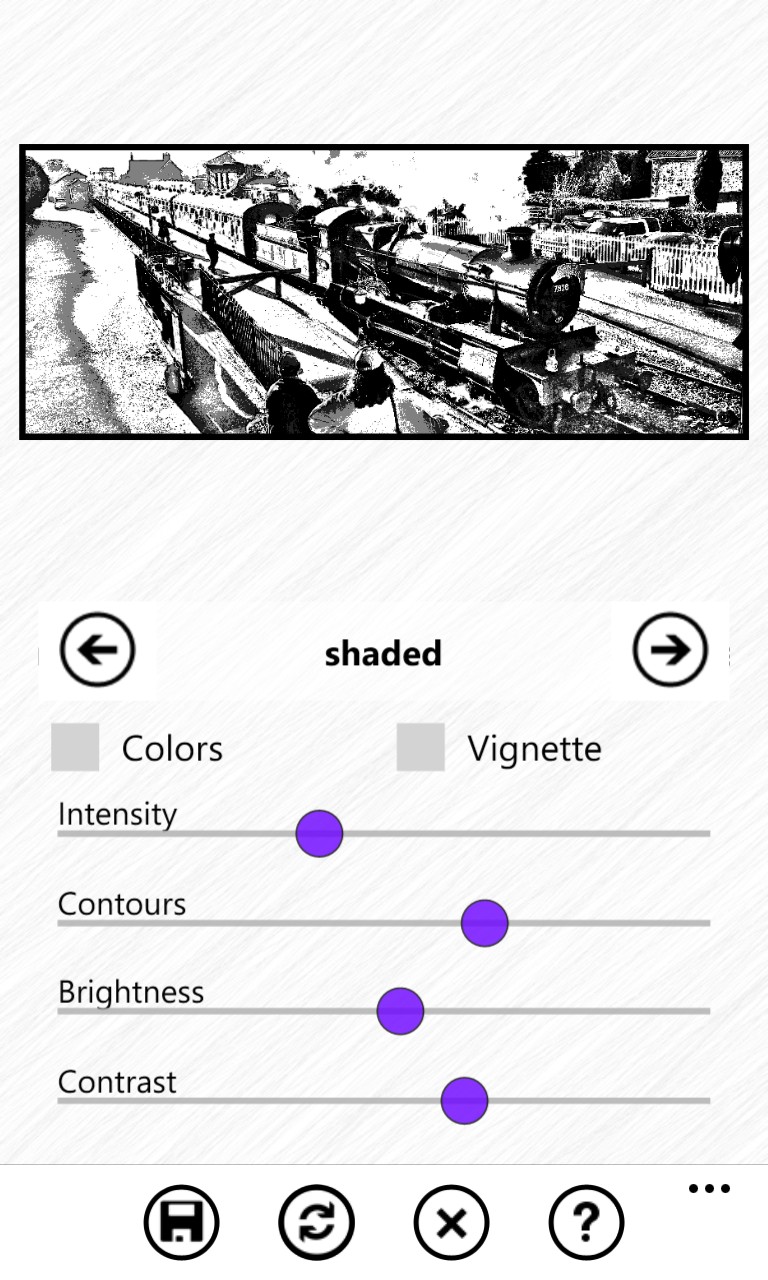 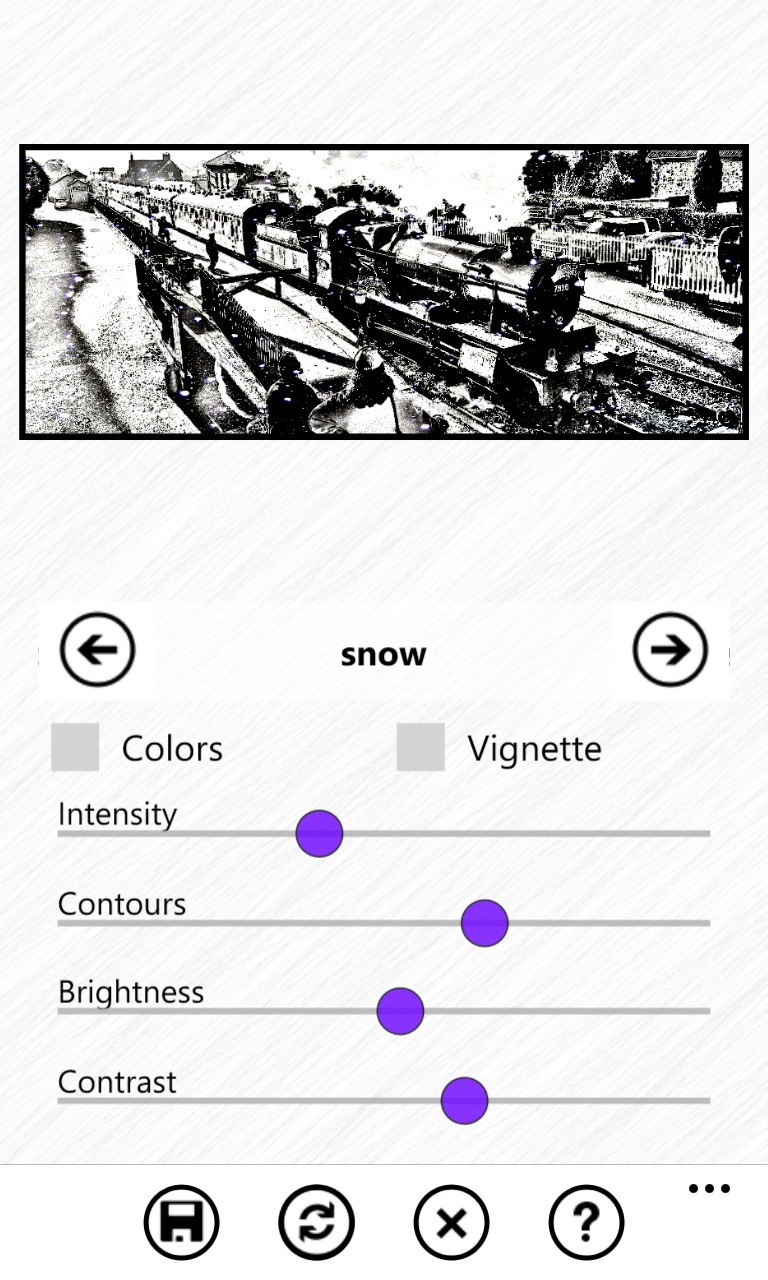 When you're happy with the effect, tapping on 'Save' then kicks off the rendering of your new sketch at full original (in this case, 5MP) resolution - other sketch utilities that I tried produced downsampled output. In addition to the - quite simply - higher quality effects here, the full resolution output is another reason why this application is currently top of the heap. Putting up with a few seconds of 'rendering' time is a small price to pay for (ahem) art! 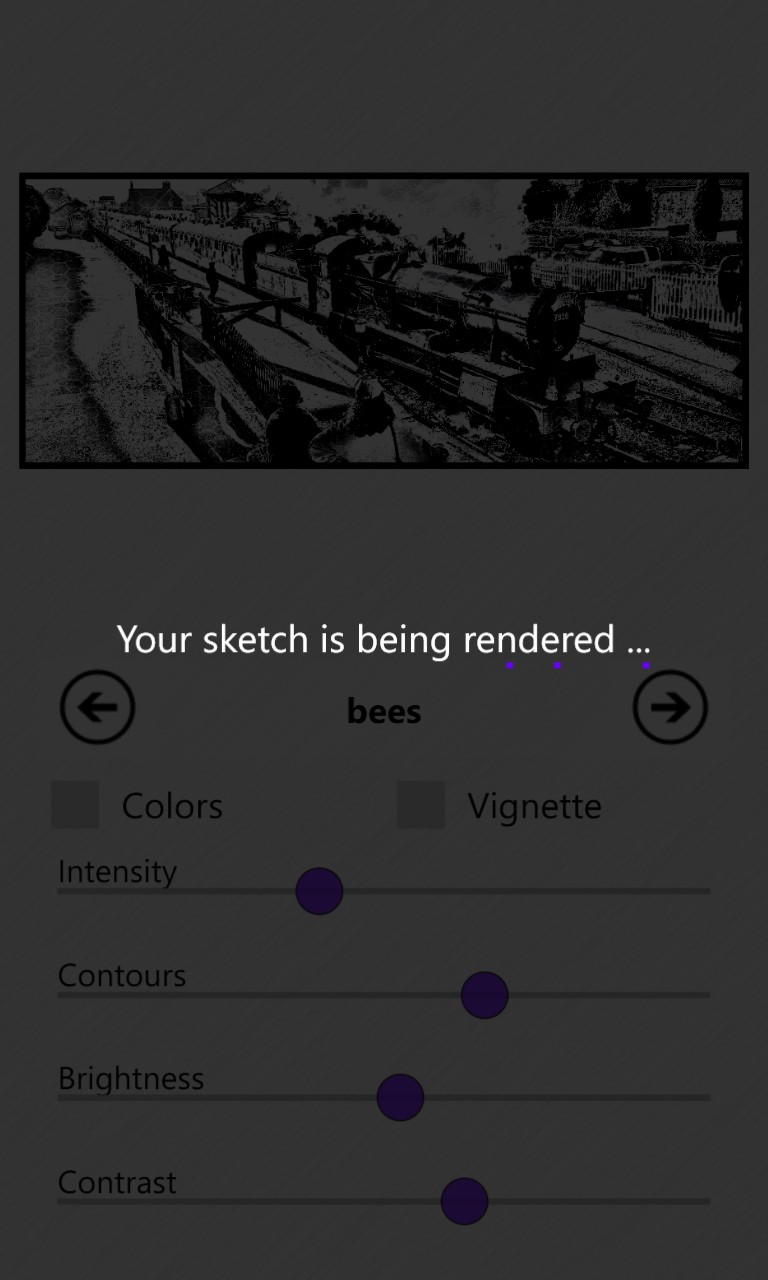 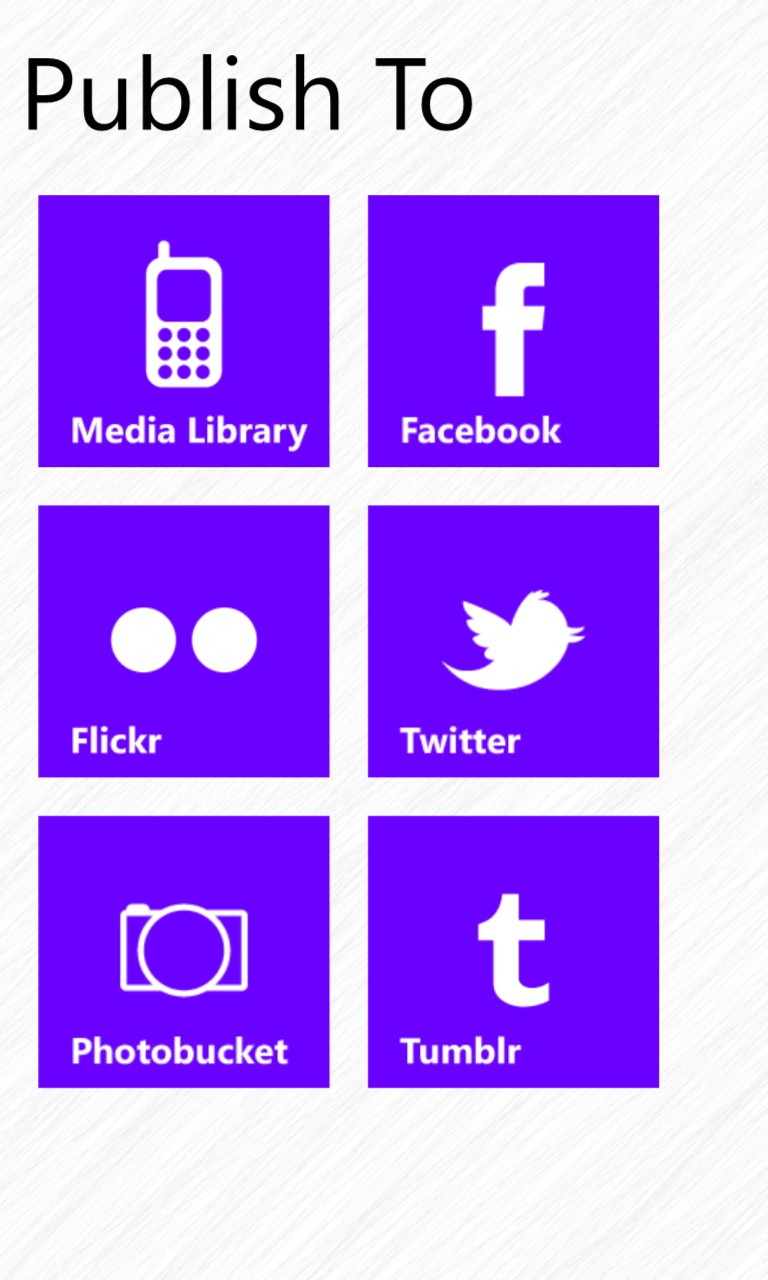 Five social networks are currently supported for direct sharing - in each case you're led through the OAuth authorisation process the first time you use the service. 'Media library' is just your standard Windows Phone 'Photos/Saved pictures' gallery.

The best way to illustrate what Sketch can do (and get your creative juices flowing) is to offer up a real world example. This photo of mine was taken on the Lumia 1020 last weekend in Somerset (click through for the full JPG if you fancy it as wallpaper!):

Opening this in (thumbmunkeys) Sketch, I chose the 'Portrait' preset, yielding this rendered image (again, click it to enlarge or download the original):

Very impressive. Highly recommended - there's a trial version that's fully functional, but with ads, but I've a feeling that most users will be so impressed that they'll buy the app properly (it's on the lowest price tier) after seeing only one output image. The shot above will be part of a framed present to my father, for example.

I've been very dismissive of 'FX' utilities in the past, which are usually merely attempts to disguise poor photos by downsampling hugely and adding lots of distracting effects. Sketch, in this form, is something totally different - a detailed and effective way of creating bona fide art from your smartphone photos.

You can buy (or download a trial version of) Sketch here in the Store.