Frozen Free Fall brings Disney's latest movie to your Windows Phone with some very colourful match-three puzzles, the cast of characters from 'Frozen' along to help you through the 75 levels, and the distinct aroma of having seen it all before. Still, if you are going to be 'inspired', be inspired by one of the biggest grossing mobile games of all time.

For those of you not following the latest celluloid releases, Frozen Free Fall ties in with Disney's latest animated film, Frozen,  which is inspired by Hans Christian Andersen's 'The Snow Queen'.  It's always nice to know the influences behind something, and at the same time it's nice to see what a new iteration adds to a story. 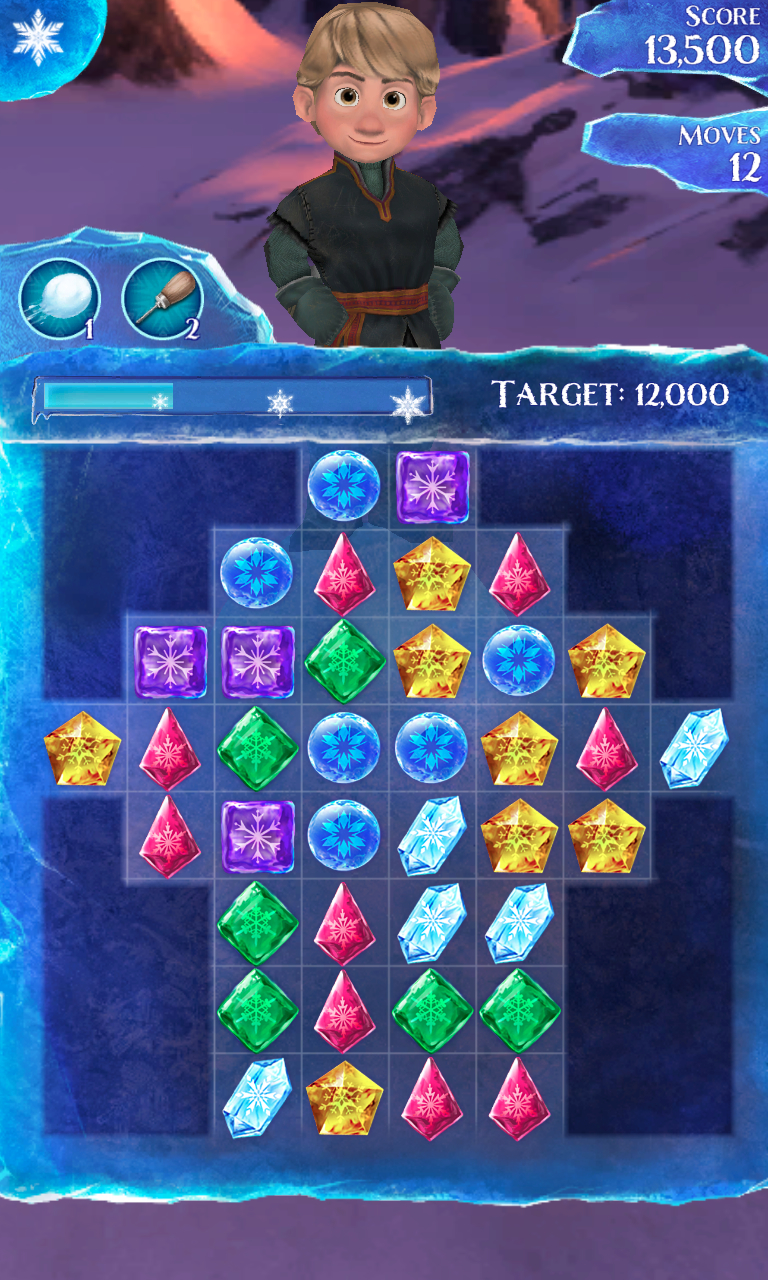 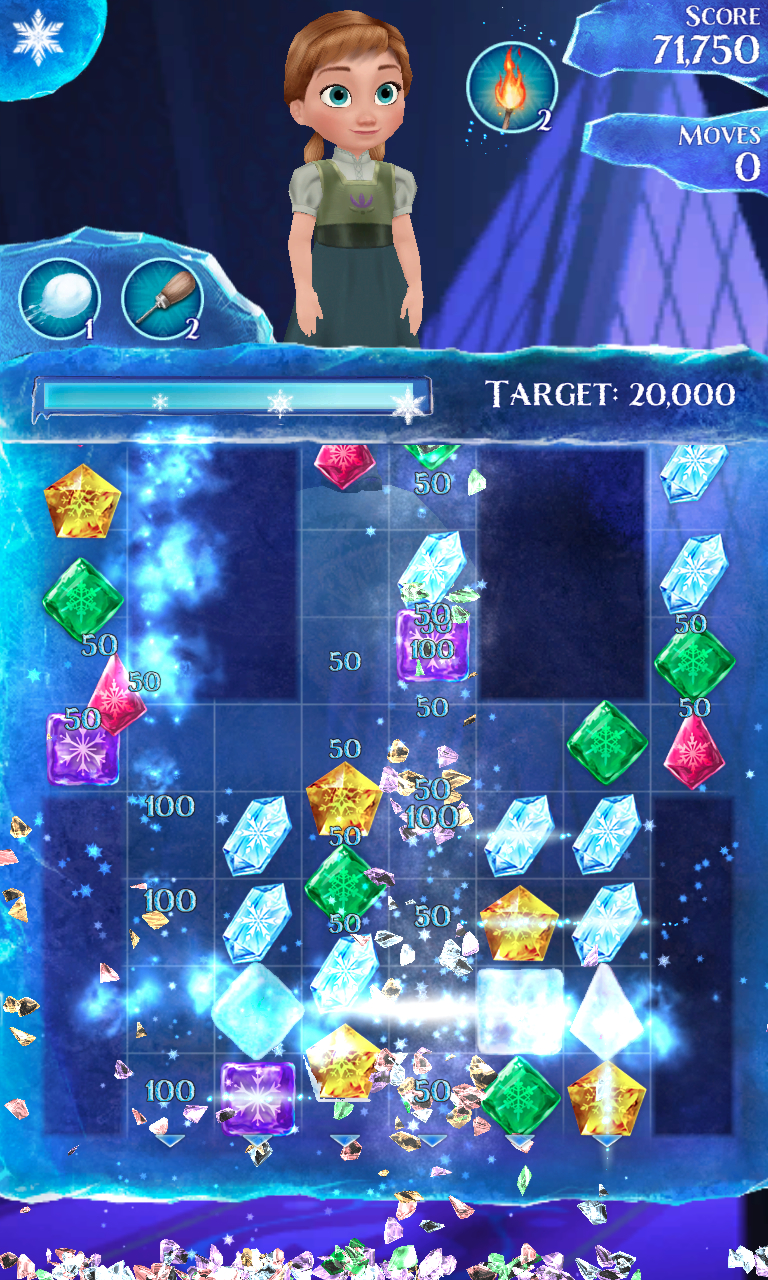 While 'Frozen' is gathering a huge amount of critical acclaim from the movie reviewers, I don't think that Frozen Free Fall is going to do the same from the gaming press. There's taking on board your influences, and then there's forgetting to do anything transformative.

Which is where Frozen Free Fall makes a bit of a mistake, at least for the dedicated gamer.

At its heart, Disney's movie tie-in game is a Match Three puzzle. By switching two adjacent pieces with each other (horizontally or vertically) you can create lines of three, four, or five, coloured ice crystals. These will vanish, and the gaps are filled as gravity pulls every other ice crystal down. If you're lucky (or you've managed to set it up) you'll start a chain reaction as another line is formed, and another, and another, with the score multiplier racking up during the chain reaction.

It's also important to try to get more than the basic match-three, as these longer lines will create powerful bonus crystals that can wipe out an entire row of the game grid, a 3x3 square, or even every ice crystal of a single colour. If that's not enough, combine two of these bonus crystals together by 'swapping' them and you will trigger an even more powerful effect with more points on offer, and more opportunities to start a chain reaction.

Frozen Free Fall is a level based game, and your progress is charted on a map screen, along with the requisite three stars for completing a level with a high level of skill. You can play previous levels if you want to improve your star rating, or select the latest level. Each level has a goal to reach. Commonly this is to meet a certain score before you run out of a fixed number of moves, but other styles are available, such as having you clear enough crystals to bring a physical object to the bottom of the screen. 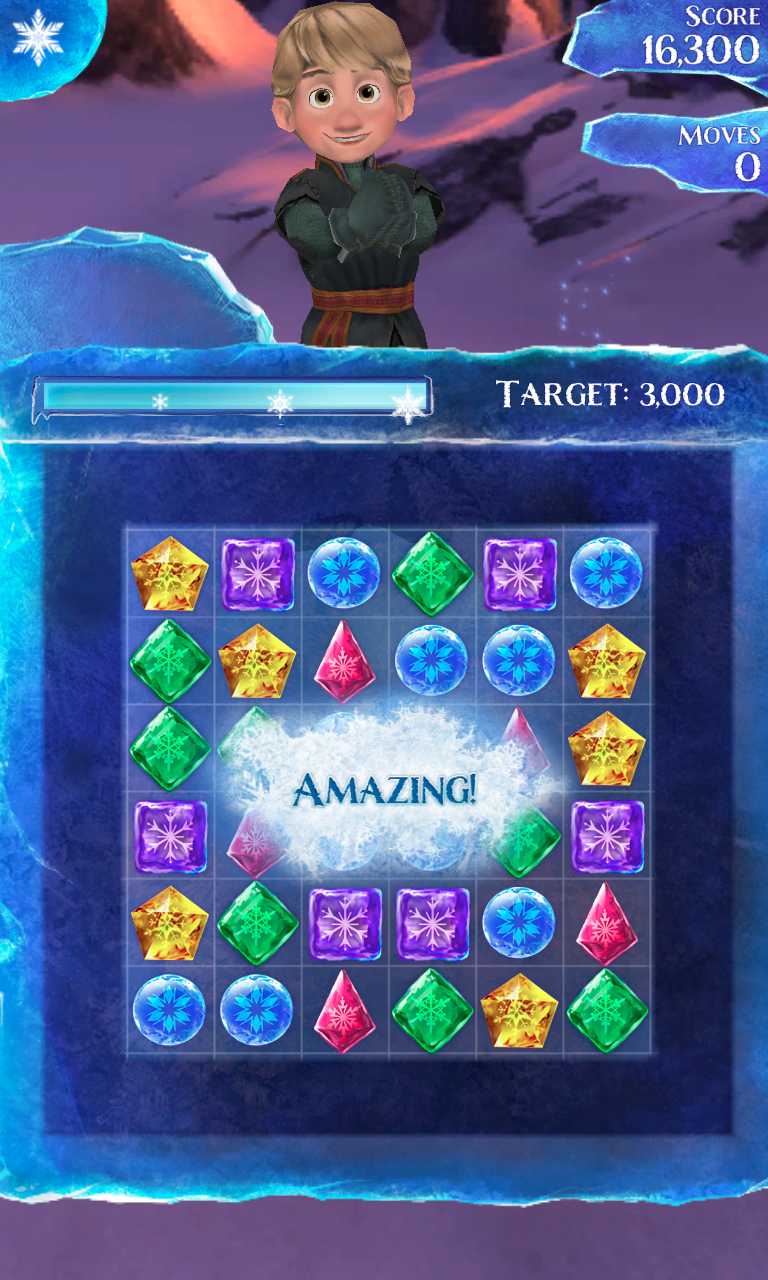 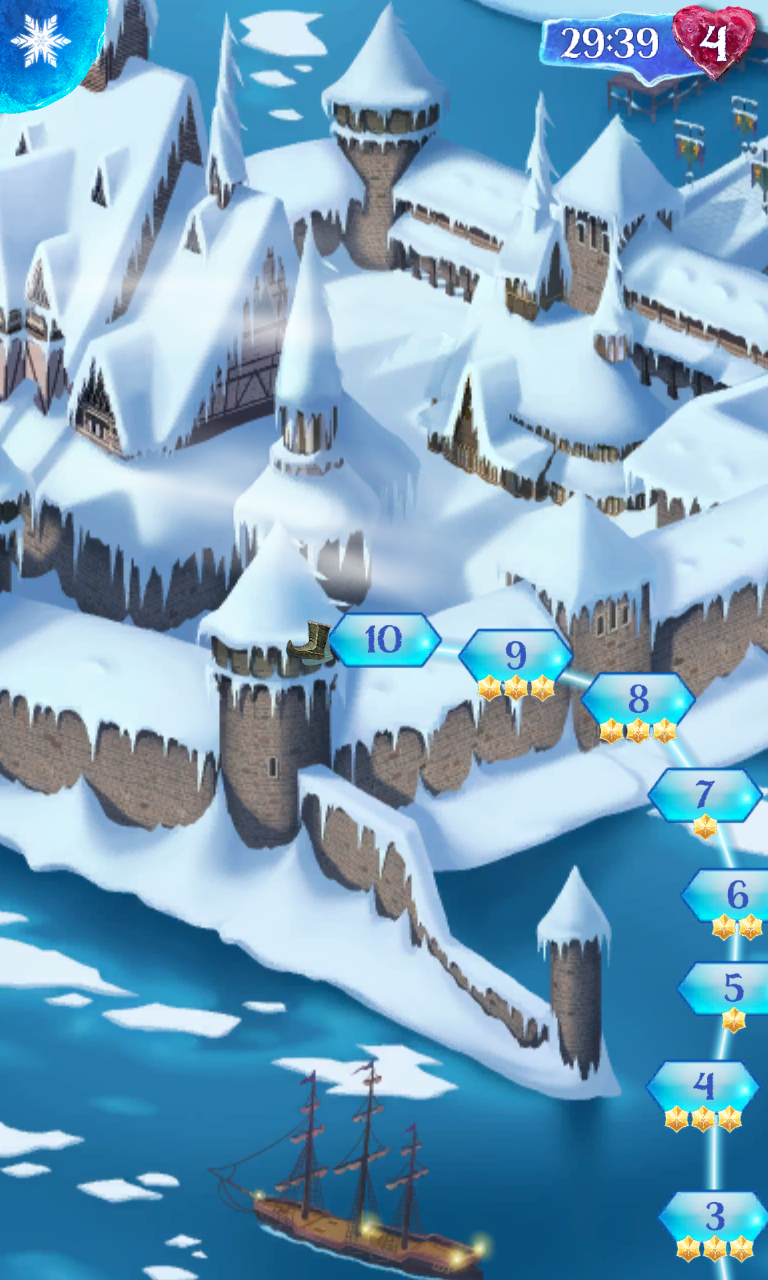 If you fail on a level, you will lose one of your five lives, and you can only start a level if you have at least one life available. You gain a new life (up to a maximum of five) every thirty minutes, so if you hit a level and fail to pass it after five attempts, you'll need to wait some time to get another life on the board, or buy a full set of lives with the in-app purchase system. These cost 79p/99c, which to me seems a pricey purchase just to start playing again. When Steve rants at price gouging app purchases, this is the style of digital goods he rallies against.

You do have some help, and this is the part where the Disney Developers try to bring the movie into the game. You can select one of the characters from the game to help you on each level, and they will watch you from the top of the screen. They each have a special power up that you can activate when you like, which might help you clear a particularly tough part of the level. You also have weaker and more generic power ups that can remove a single crystal, or give you a few more moves. These, like the main power-ups, are demonstrated to you early in the game and you are handed a few of them, but if you want any more, back to the in-app store you go.

Frozen Free Fall certainly has the mechanics of the modern match-three down pat. The user interface is snappy, although my personal feeling is that I see the words 'Loading...' just a little too often for my liking. The various ice crystal colours are clear, and the recognition is aided by them each having a distinctive shape. But I have two problems with Frozen Free Fall, one from a gaming viewpoint and one from an influences point of view. 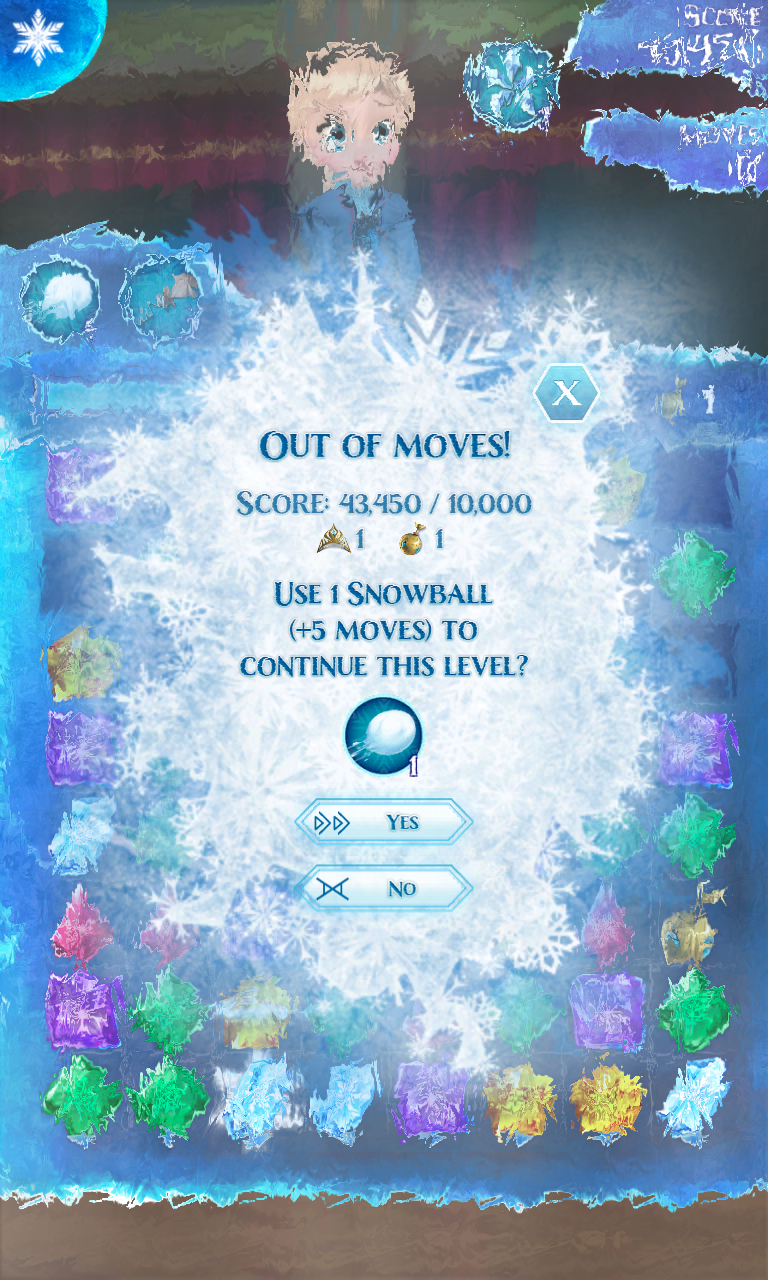 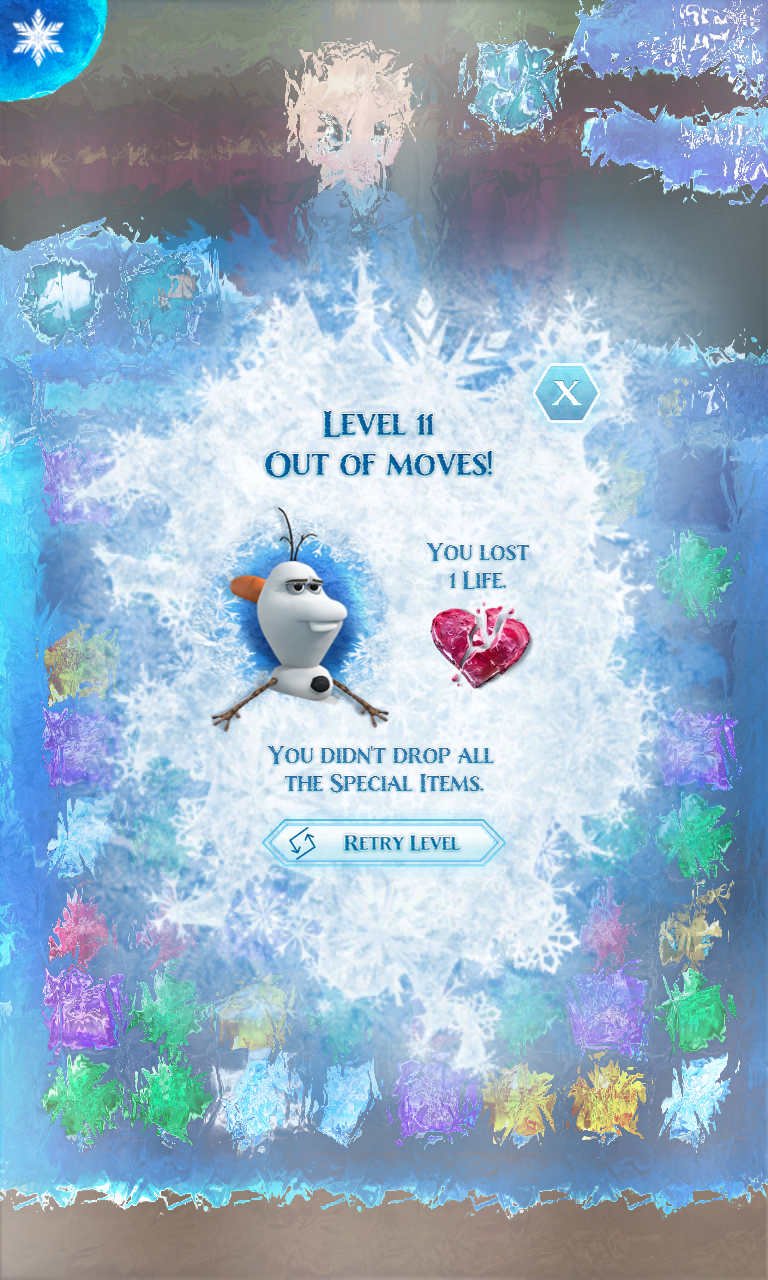 The first is that it's far too easy. I worked through eleven levels of the game before I came to a level that I failed to solve the first time around. That's around thirty to forty minutes of gameplay. Neither would I say that I was using ninja-gaming skills. The early difficulty level is non-existent and that makes for a boring game experience. If the developers were targeting a younger audience, perhaps this is forgiveable - but then you come back to the excessive use of in-app purchases to reload up with consumables from inside the game.

Secondly, there is nothing in this game that feels remotely original. The idea of a map you walk through with the levels, which have three stars for perfection, with bonus crystals awarded for lines of four or five crystals, they all match up with a certain other match-three game. Even the abilities of the bonus crystals, and what happens when you combine them, matches up with that other game. 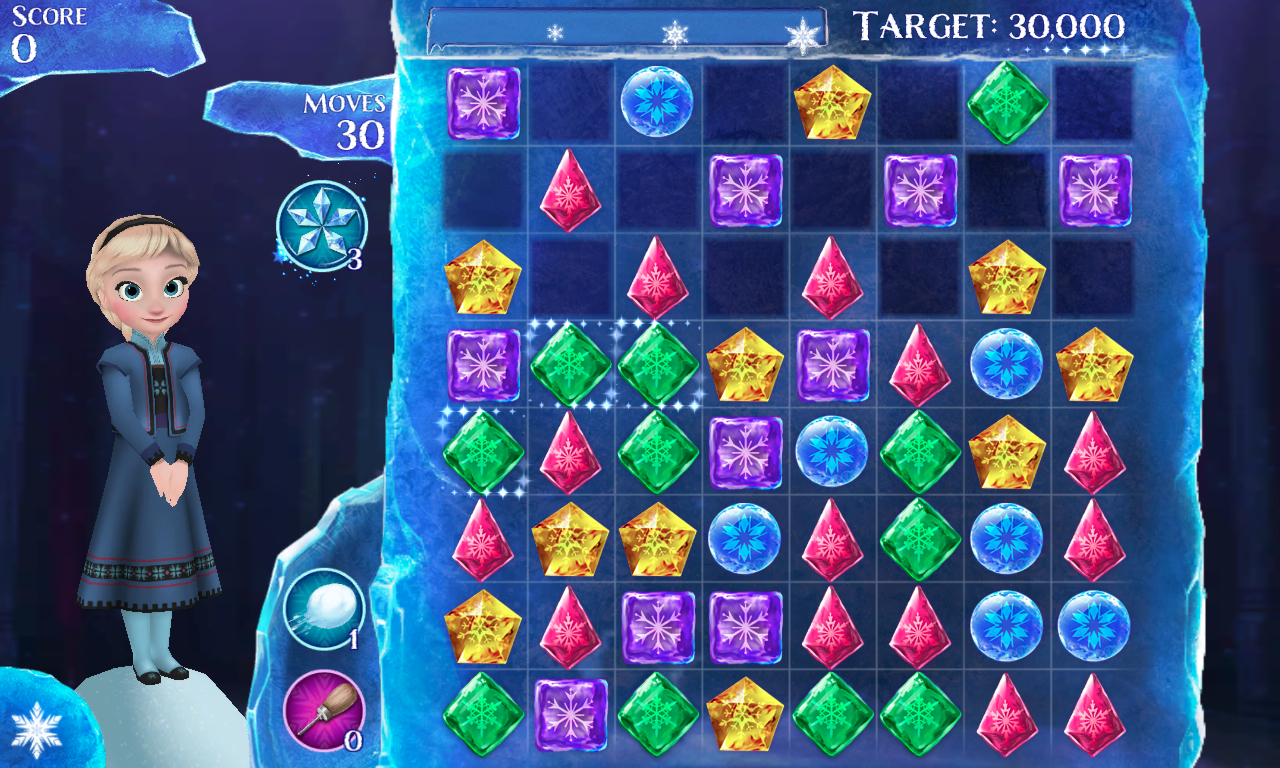 Frozen tells the story of Hans Christian Andersen's Snow Queen, and gets away with it. Frozen Free Fall tells the story of Candy Crush Saga. And to this reviewer, it simply lifts every single mechanism of that game, from the life timers and the bonuses to the power-ups and the income structure, runs happily in portrait or landscape mode, adds some cute smiling princess-like characters, and hopes everyone will go "aww...."

Nope, not falling for it. It's an easier and slower version of Candy Crush Saga, which costs just as much both in the short-term and the long-term.. Frankly, I'll wait for the official version of Candy Crush Saga, even though the kids are going to love Frozen Free Fall, and it's hard to fault the underlying code or mark it down simply because it looks like something else.