It shouldn't surprise me that the classics are usually tarted up in any mobile app store, but it means that when I do find a game intro that hooks me, I'm going to get a little surprise when I realise "I know this!". Such is the case with Boxed In, AE's latest release for Windows Phone. Ready for the spoiler? It's Sokobahn.

So the concept of the game is well-worn, but let's do a quick refresher. You work in a warehouse, and crates litter the floor. These need to be pushed into the correct place, but they are so heavy you can only push them one at a time. No pulling, and no pushing two crates that are next to each other as one.

Sokobahn is a very logical game - there is always a solution to each level, and the only thing that will stop you winning is making the wrong move. No incorrect reactions, no guesswork, nothing random. Luckily AE has not changed any of that, and if I'm not mistaken, some of the levels that you come across are taken from the 'classic' original set of Sokobahn levels. 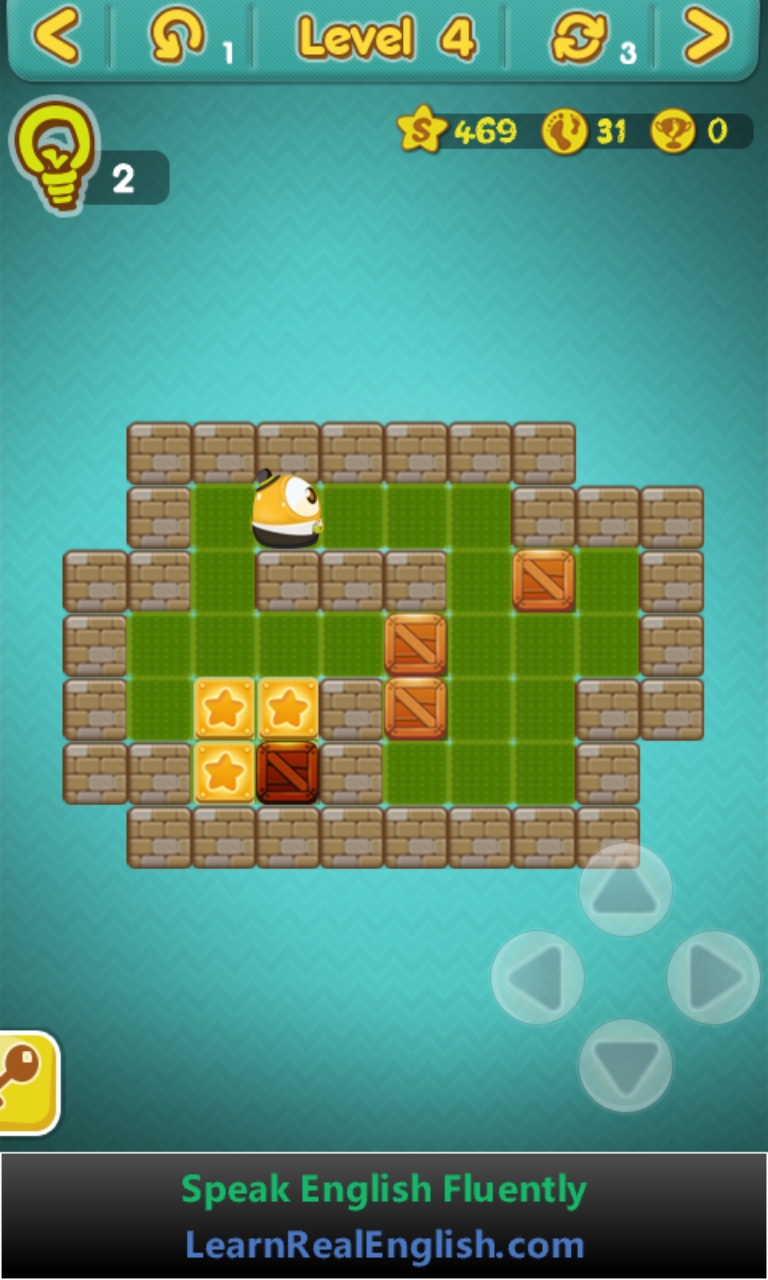 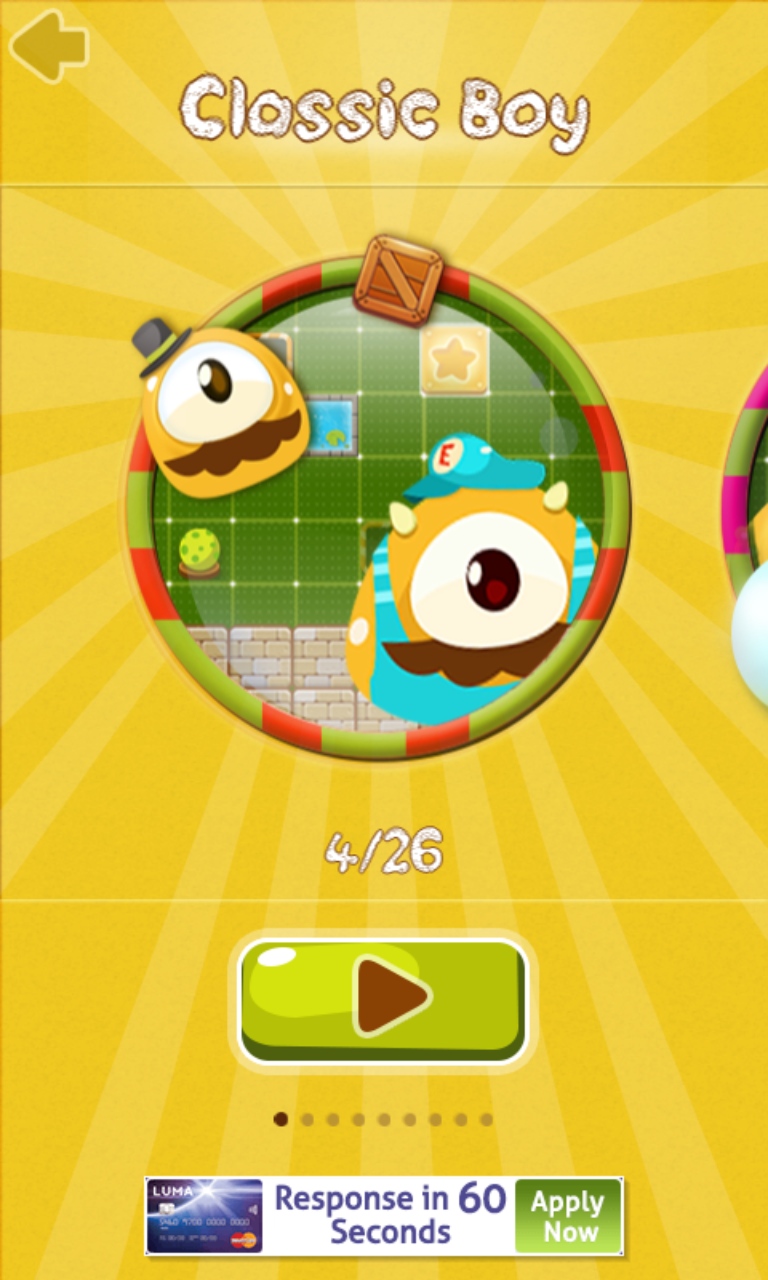 AE has made some additions to the game structure though. As you play through the level packs you may find some hidden objects as you move the crates around. Pick up these mysterious gifts and you will unlock the 'boss' level of each mystery pack. In actual fact this is little more than a new way to progress through levels, but it gives the casual player something to aim for.

AE has also added an advanced mode, where boxes still need to be navigated to specific spaces, but these spaces are switches to lower walls - your real goal is to collect all the candy canes on a level, and then head for the exit. For once in a Sokobahn game, perfect positioning of the boxes is not the end, it is the means to an end, and that might mean some shuffling around with some intermediate solutions to reach the candy canes before reconfiguring everything so you can reach the exit.

Both levels are wonderful implementations of Sokobahn, with the classic game ported with enough modernity to work on a mobile but retain the charm, while the advanced mode feels like a brand new game (and is probably a good justification as to why this isn't called AE Sokobahn).

Controls are relatively deliberate as well. You can use your finger to swipe in the required direction, but I ended up using the on-screen D-pad which allows you press the virtual button to go in the correct direction., Simple, clear to use, and very unlikely to result in any mistakes. 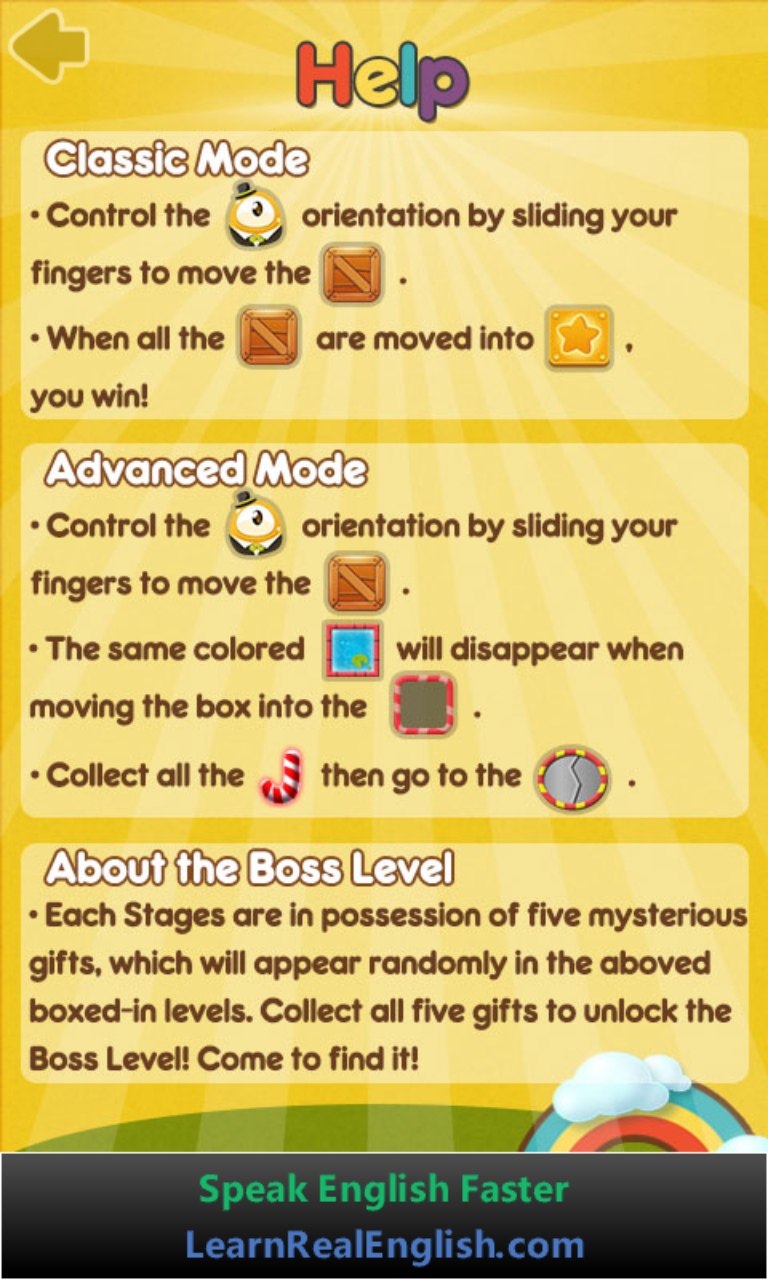 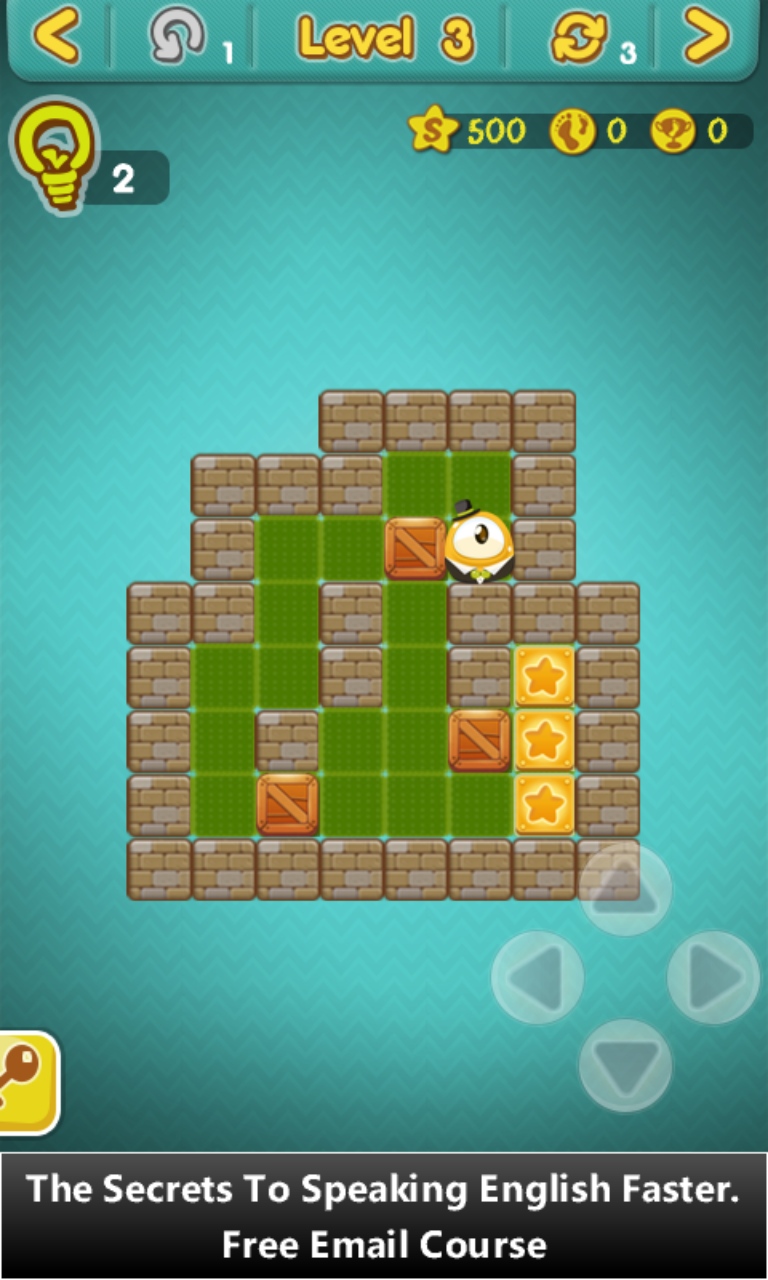 Graphics remain clear as well, with an easy to make out difference between boxes that in the factory, boxes resting on switches or target spaces, and items that you can collect as you play the game.

And then we come to the negatives, and while they're not enough to put me off AE Boxed In, or even drive me to deleting the game from my handset, they come really (really) close.

It's the freemium nature of the game. AE Boxed In is a free download, so I was expecting some form of user payment. The on-screen advertising seemed to answer that, but no. There was an even lower, dirtier trick ready to kick in. Sokobahn is a game of experimentation, where you need to try things, especially at later levels, to find the correct solution. Rarely do you stumble over the correct way on the first or second try.

Naturally there is a 'restart level' option but beside it on the screen is a little number. This is how many times you can restart a level... three.

Of course you could just wait a while for it to reset, but that negates the delight and the flow of a good game of Sokobahn. Or you could pay £3.99 for 'unlimited restarts'.

If AE wanted to charge £3.99 for the game, then AE should have charged £3.99 for the game. I know I've stood up for freemium principles before on All About Windows Phone, but they need to be implemented in a fair way. I don't think that AE Boxed In is being fair.

Now do the above but with a find and replace for 'restart' on 'undo'. You can undo one move (perhaps against a mis-key or slightly off-centre swipe of a finger) but if you are looking for any more than that, you'll be paying the freemium fee to unlock it, and yes, that's another £3.99. Give or take two pennies, that's £8 to have a version of Sokobahn that would be fit for purpose. 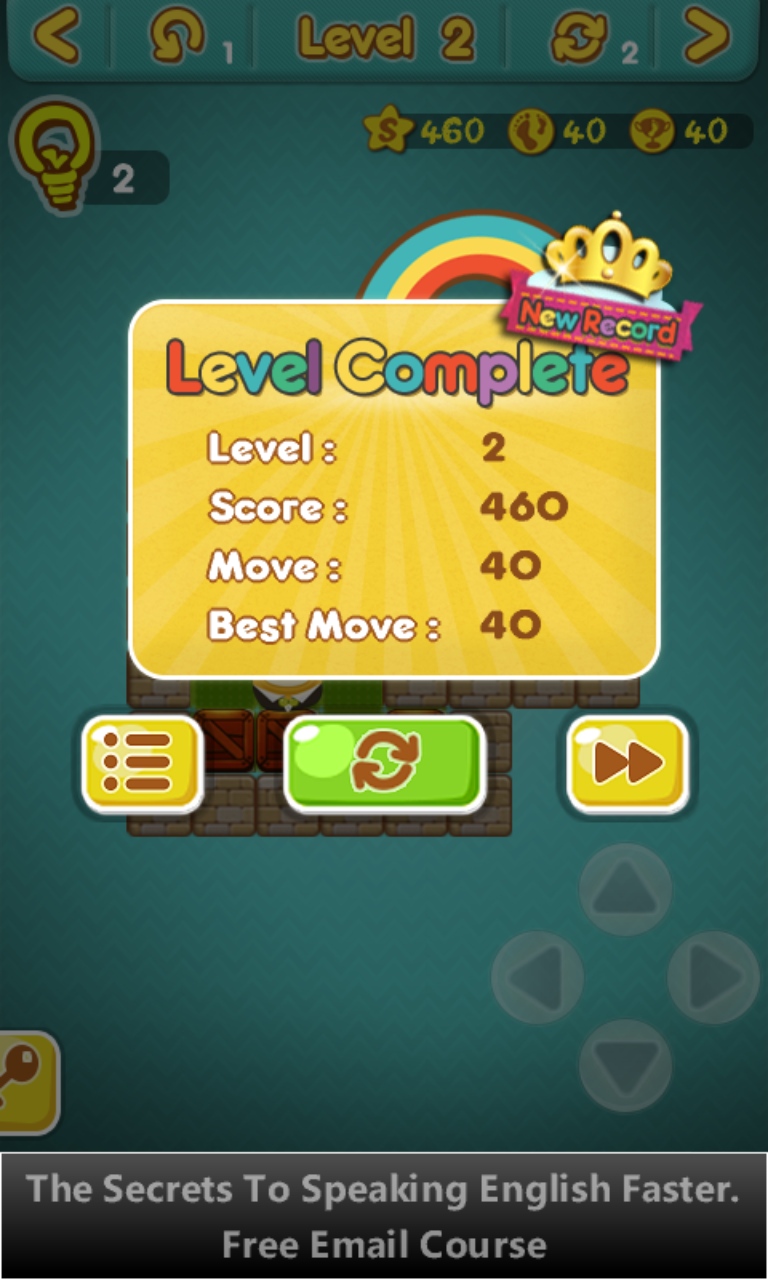 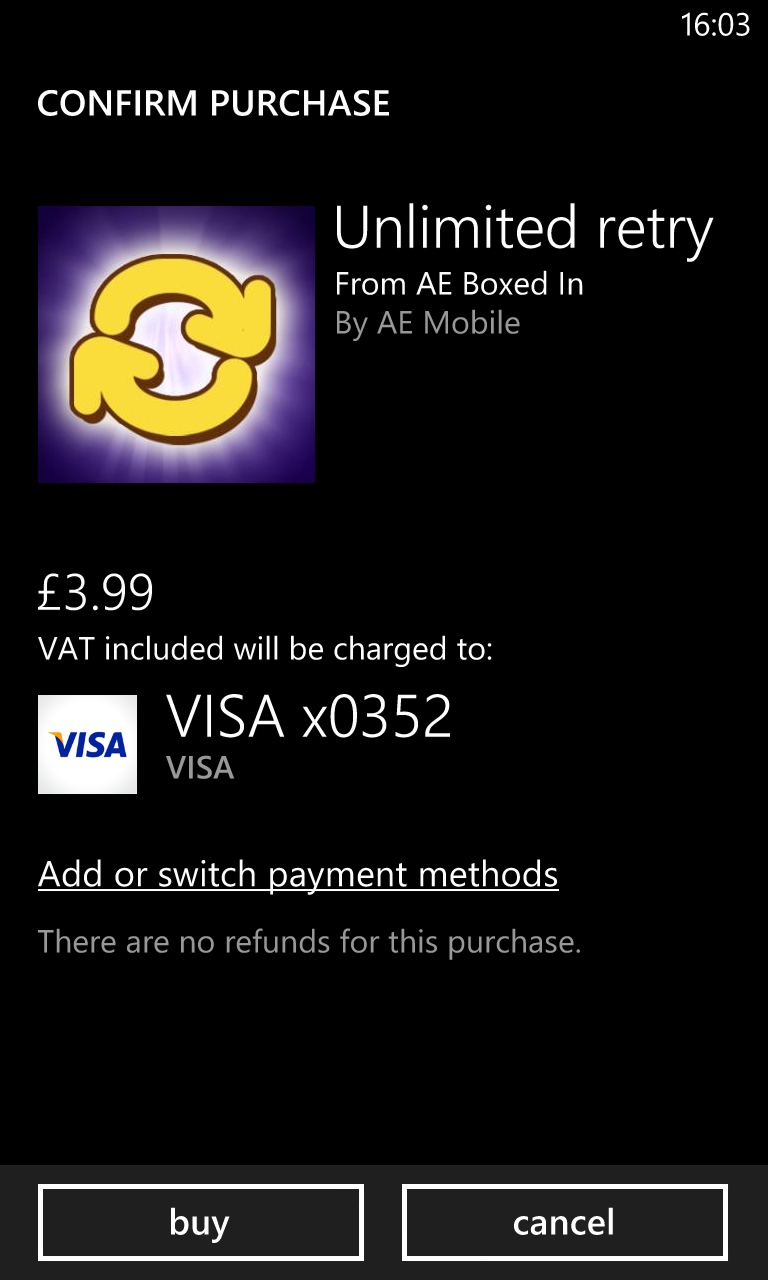 The problem that you have when you rework a classic game like Sokobahn that your players will have experienced many times before is that they know how the game works, and there are certain expectations. AE might think that is is being smart in putting the paywall at one of the last features that you need to use when playing a game, but it's also the point of maximum frustration for someone playing the game. That is, obviously, not the time to ask them for money.

It may look the part, it may act the part, but when it comes down to a bit of respect for the player, AE Boxed In forgets that players have a choice of where to spend their money and which version of Sokobahn to play on their Windows Phone.

I suspect many will decide to look elsewhere for their box-moving fun.