A great pool game is always a good thing on a mobile device. Pool Arena Online is decent, at least. A great online multi-player experience is also always a good thing. And, again, Pool Arena Online is... decent. Put the two together and what have you got? A somewhat disjointed pool-centric gaming system that occasionally delights and often disappoints.

Most people are familiar with the concept of online, turn-based, asynchronous games. For example, you'd take a turn and then go off to do something else. A few minutes or hours later, the other player would make their turn, you'd get notified (here via both toasts and live tile) and then you'd fit in making your next move around whatever you were doing at the time. And so on.

Such systems work well for chess, scrabble, and other logic or strategy-based games. They don't, I've discovered, work perfectly for pool. Which isn't unexpected - part of the charm of pool is that you're there watching the other player make their mistakes or brilliant shots in real time, watching where the balls are (and their order, since this is 9-ball rules only, so far) and getting a 'feel' for the frame. 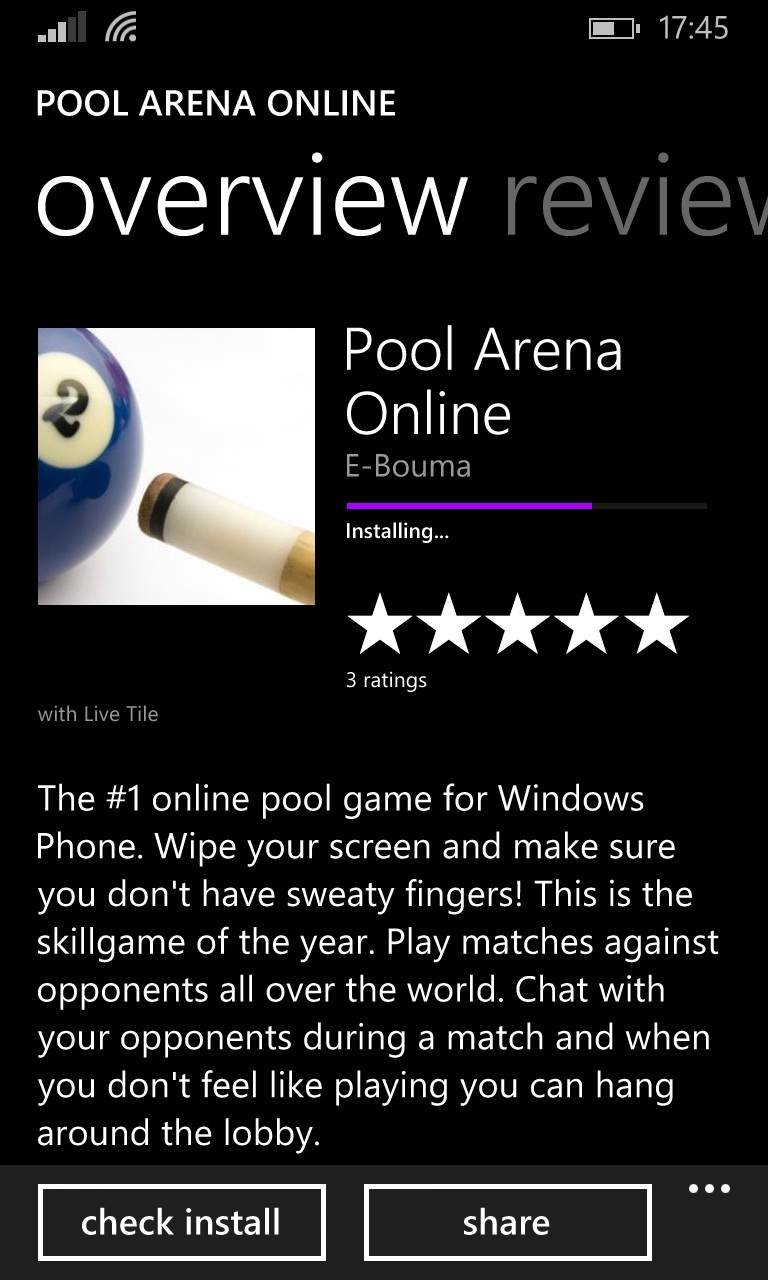 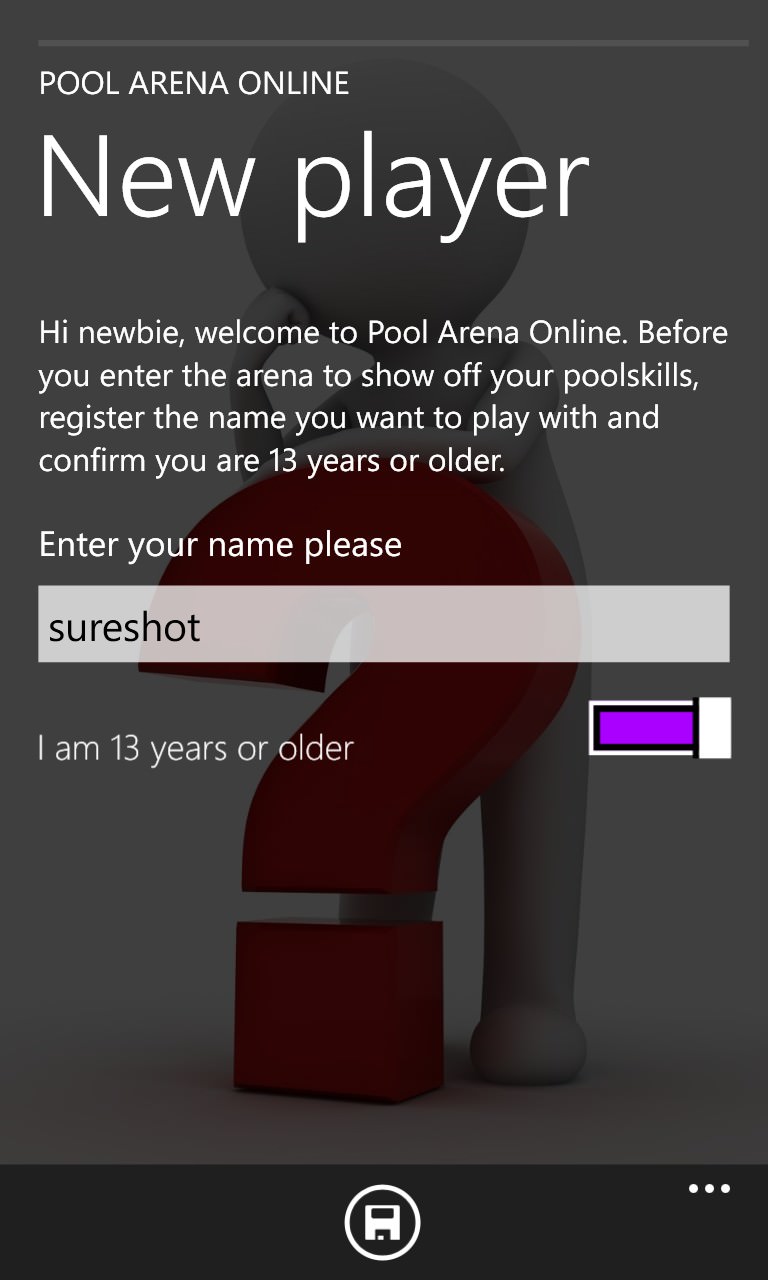 The age toggle is simply because of the presence of online chat within the Arena and the possibility of abuse and swearing, though I didn't see much.

So taking a shot and then having to wait (potentially) hours before anything else happens is a bit frustrating. Pool Arena Online aims to alleviate this by allowing you to have multiple games ongoing with multiple opponents, with the idea being that at any given point, if you have enough games in progress, it'll be 'your turn' soon in at least some of them. But then there's the matter of having to assess every table, every position afresh from scratch, unless your memory is good enough to keep a dozen table positions in your head at once. Mine isn't. 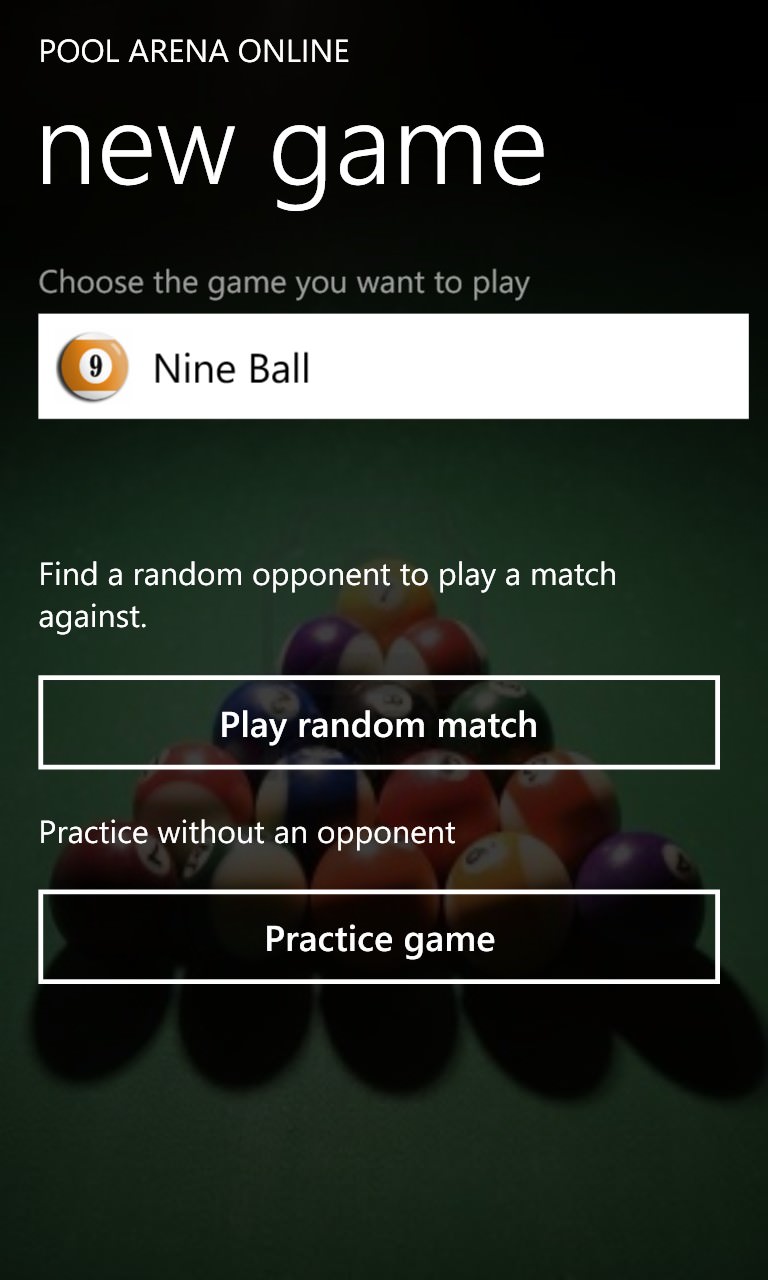 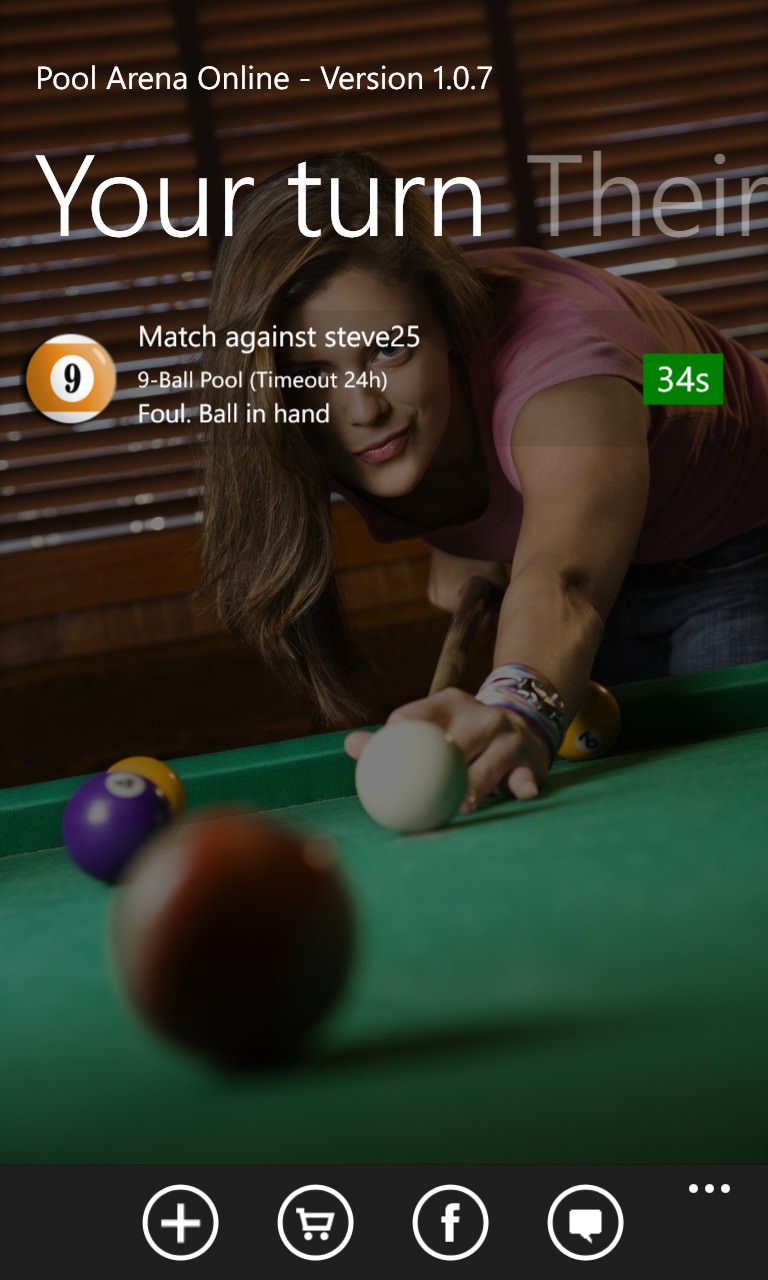 Starting a new game and (right) it seems like it's my turn in an existing one - woohoo!

Then there are the games that get, simply, abandoned, stuck with an opponent appearing to have gone AWOL. If you're lucky, you get an opponent who's as engaged as you and turns are only a minute or two apart, but in my 24 hours of testing this was quite rare. 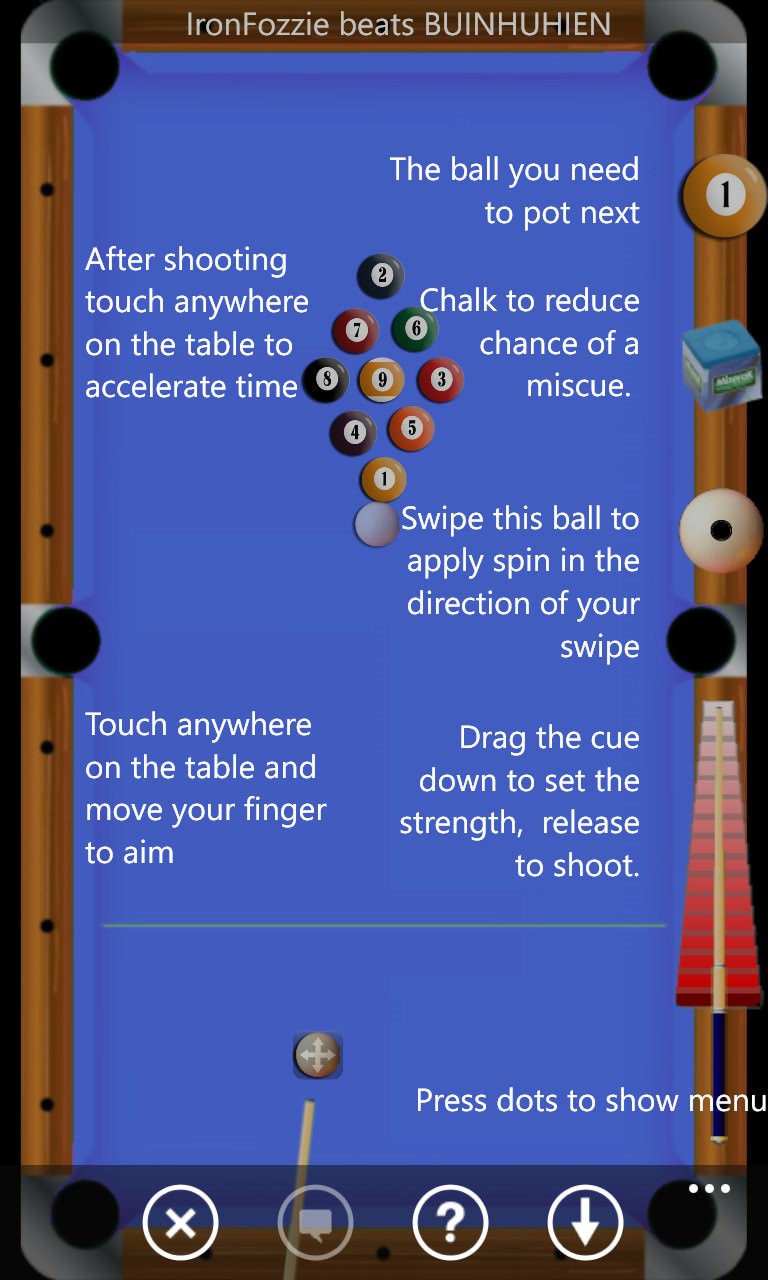 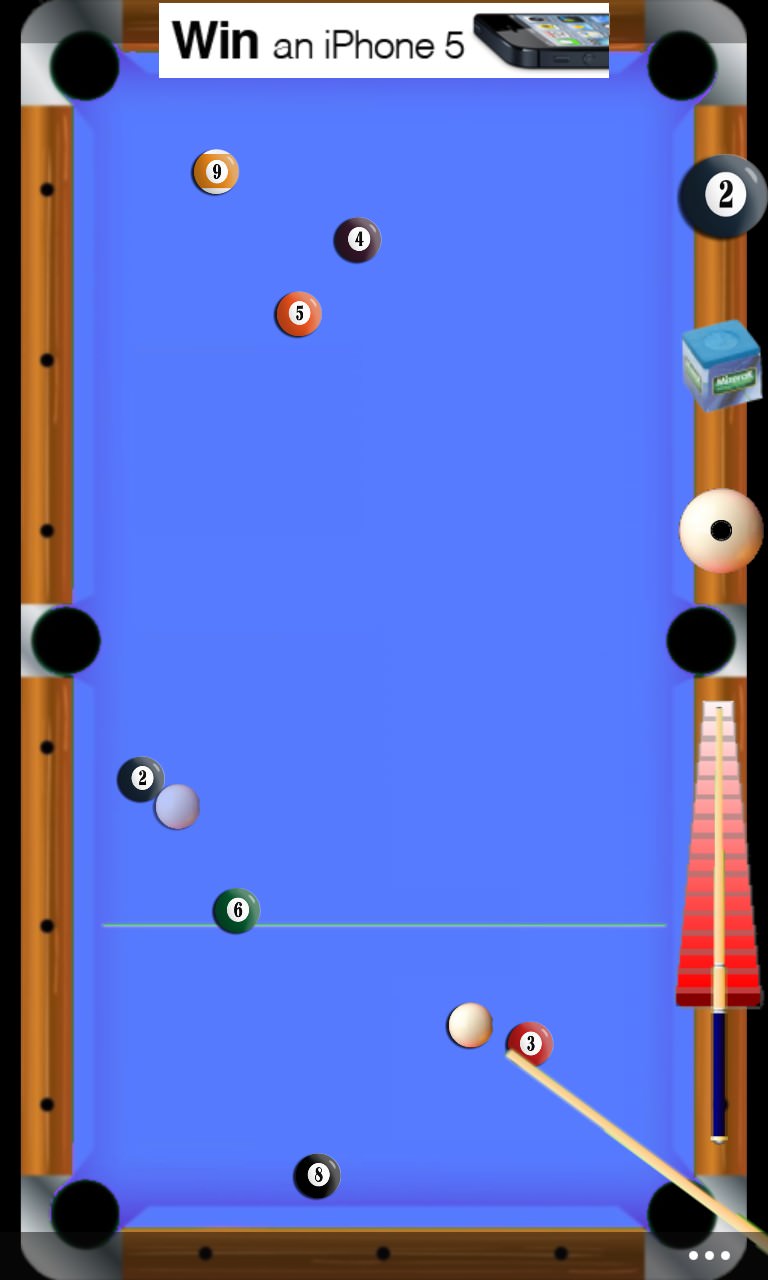 A nice graphical overview of how the controls work... (right) a game in progress...

When 'coming back' to the table, you're shown what the opponent did, in terms of their break, one shot at a time. Which is fine, except that this system is buggy and if they happen to clear up (i.e. pot the 9 ball legally) then you're left looking at a 'Waiting for opponent' banner while, in fact, he's long since won and left the arena. As is confirmed by the top-of-screen news flashes as to who has beaten who. "Oh, that's me, I just lost..... apparently...!" 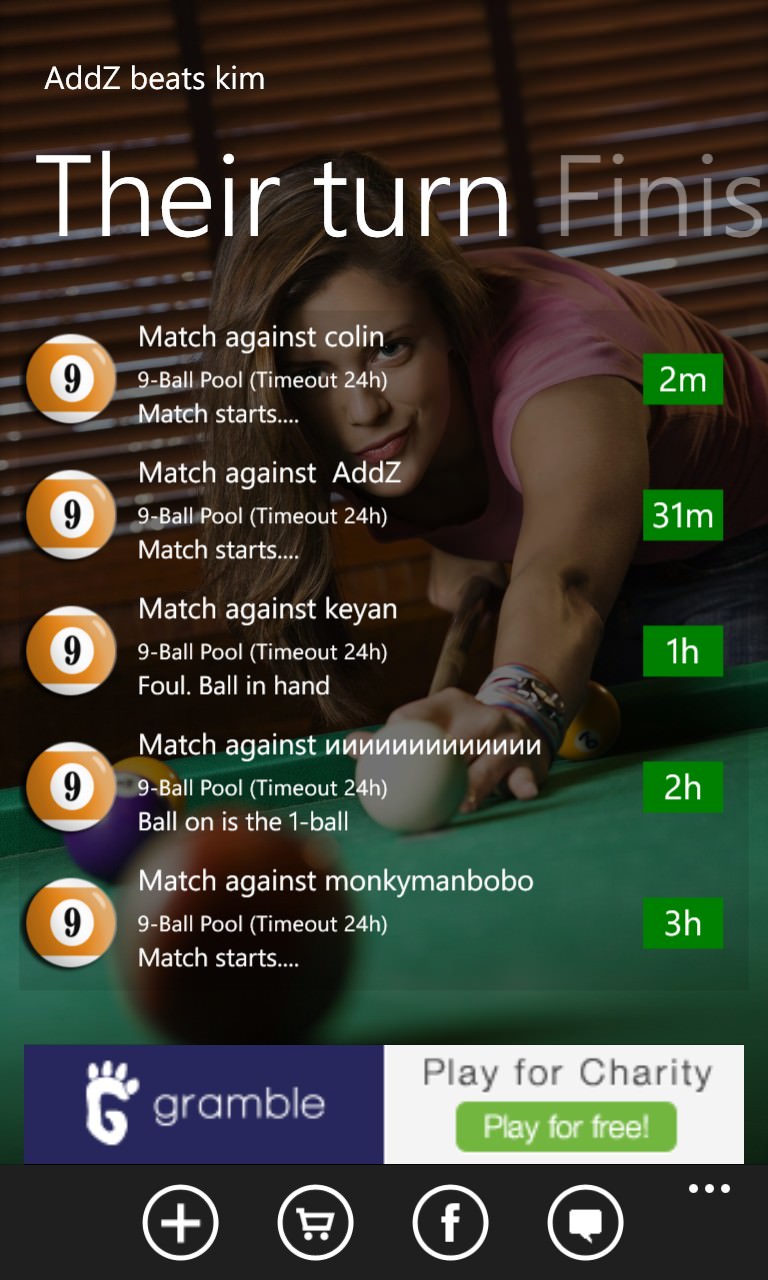 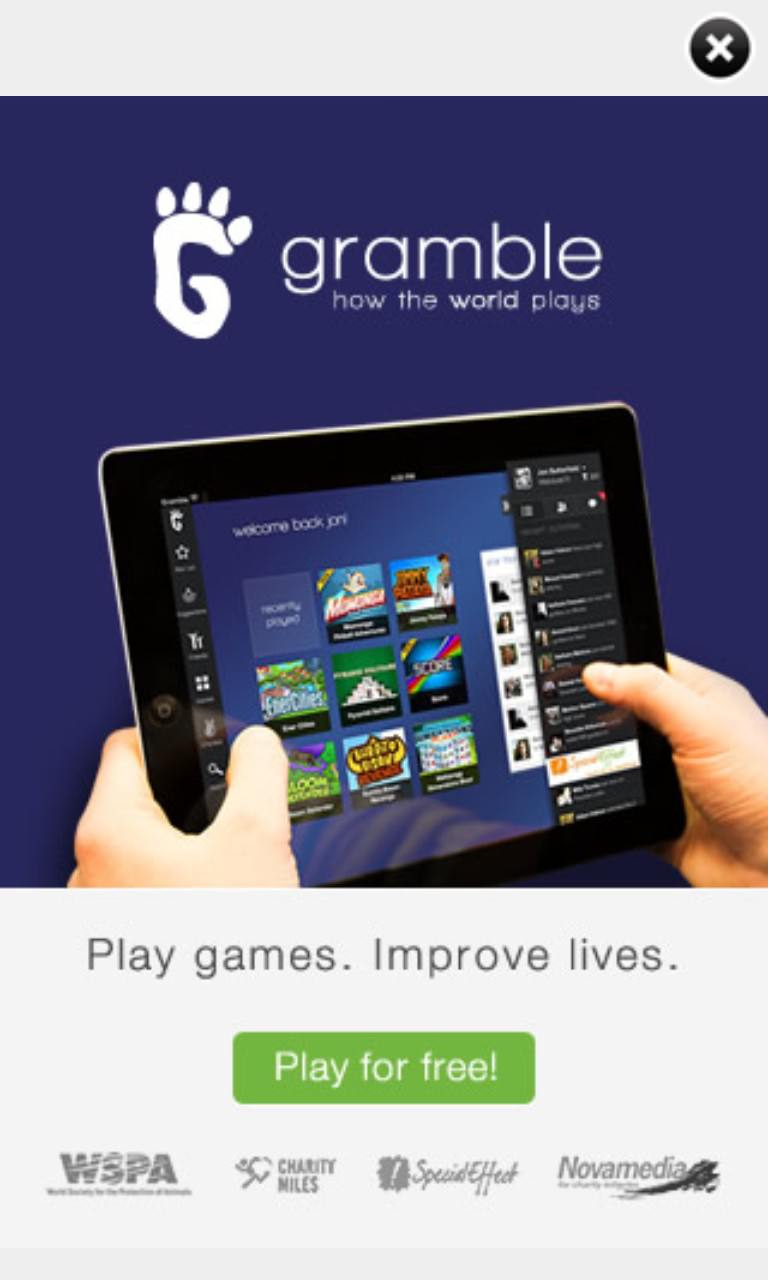 A litany of games waiting for opponents... time passes..... (right) until you pay up to remove the ads (see screen below), occasional full-screen ads pop up while you wait...

You get the idea. I'm a big fan of pool games and they can be multi-player and online if done right - Pool Break Pro on Android gets there with an immersive, real time experience, where you see your opponent (virtually) walking around the table and lining up, etc. In other words, it's a dedicated, foreground, real time experience for both players and is all the better for it. 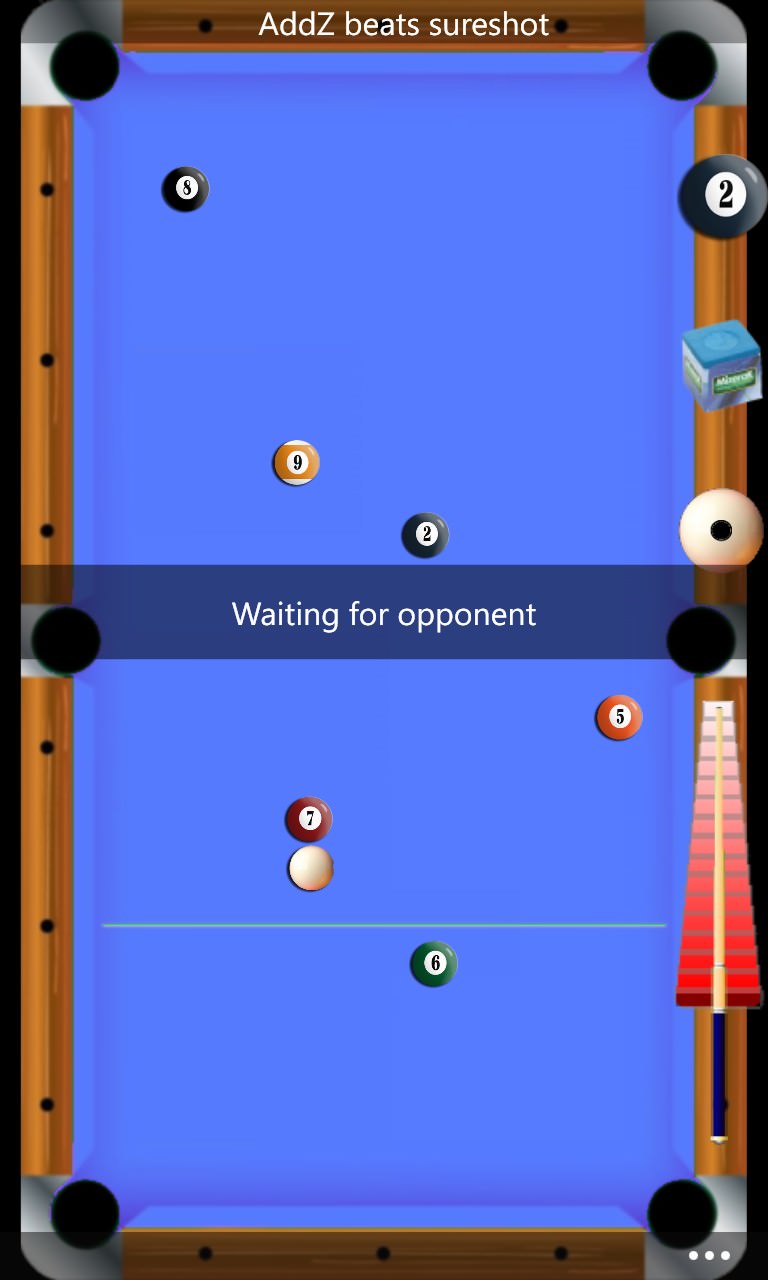 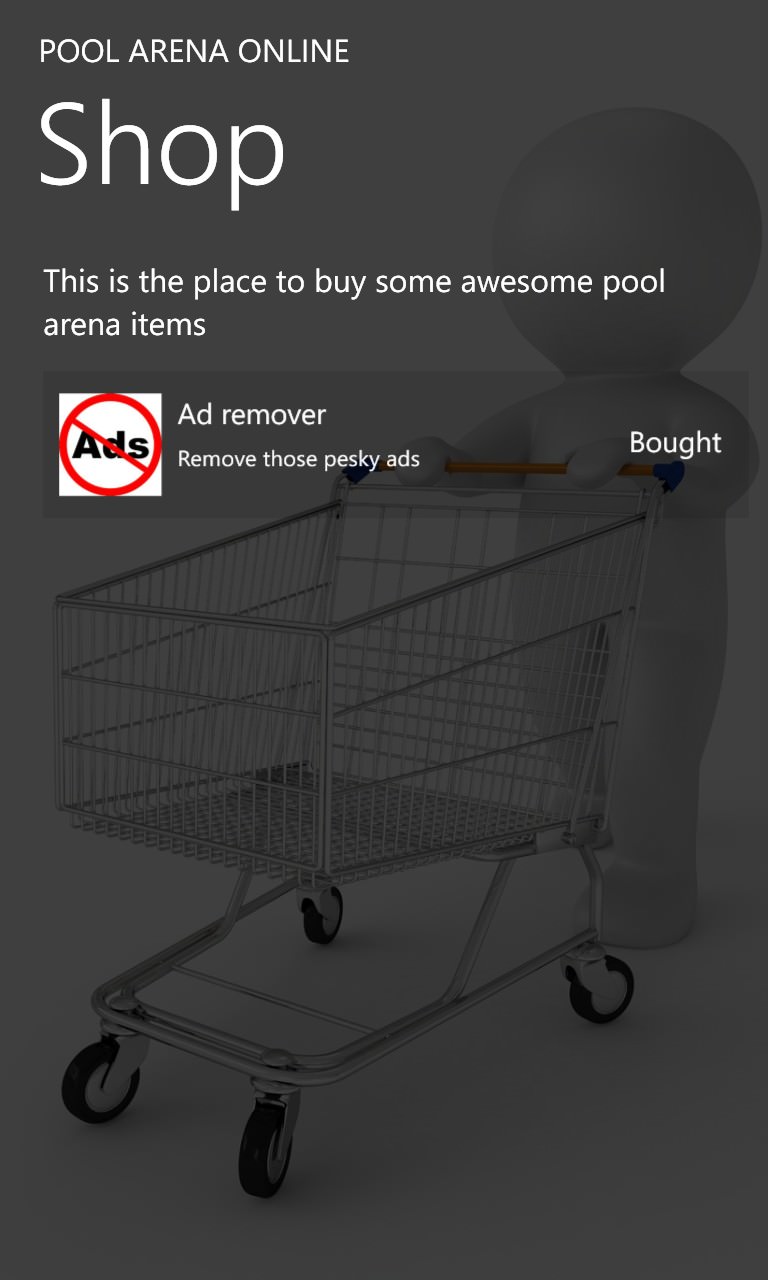 More waiting.... (right) and I stumped up to remove the ads. I have faith that the game experience will get better with time... fx: crosses fingers....

What makes the turn-based failings such a shame here is that Pool Arena Online has a pretty good pool physics engine. OK, so the balls aren't shown 'rolling' properly, i.e. animating, but they do react realistically to impact and you do get an intuitive control system, with aiming, spin and power. It's unashamedly 2D, but none the worse for this. 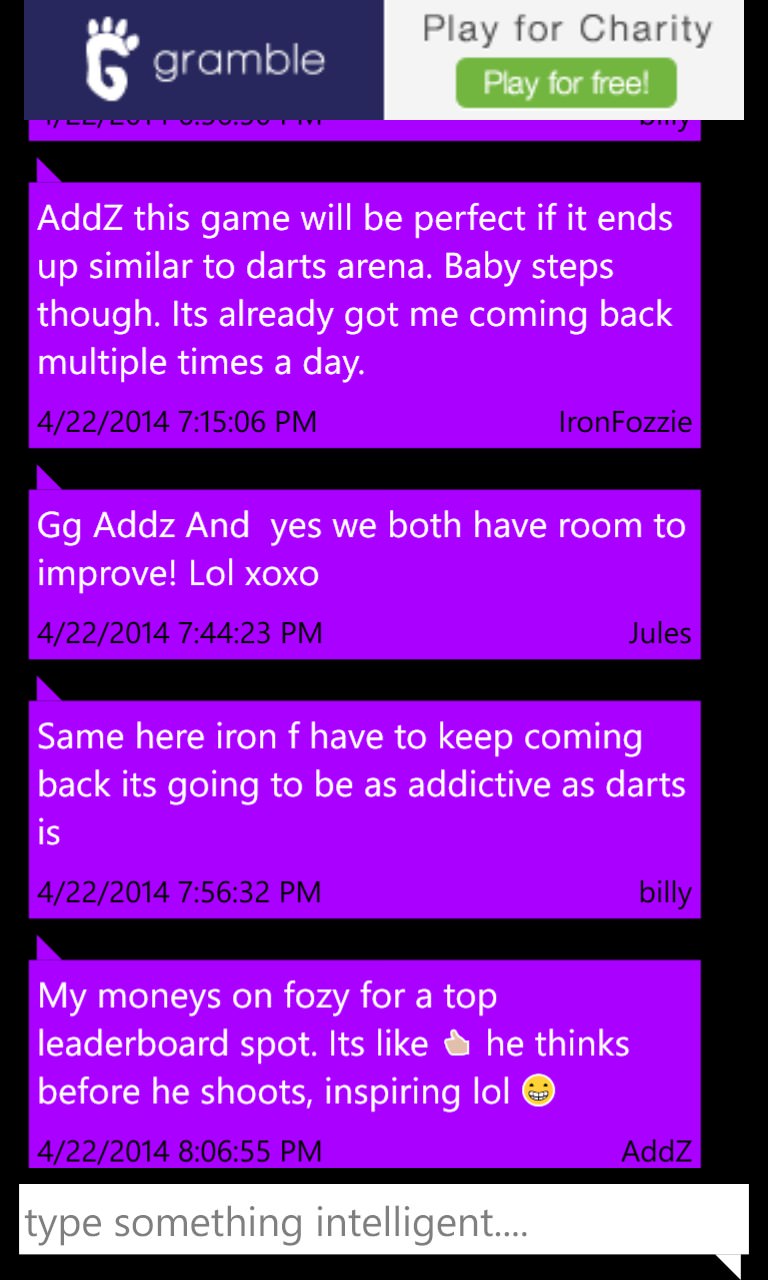 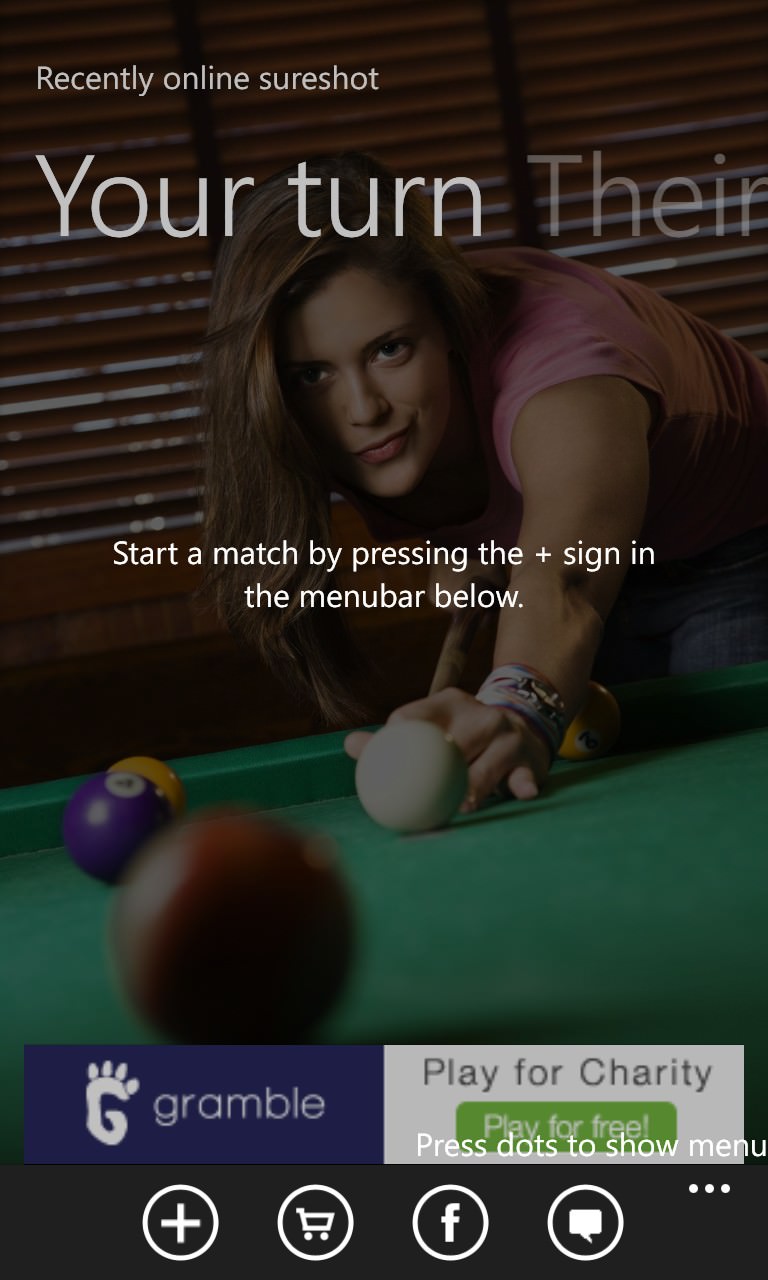 The online chat stream between all players currently available... (right) and, despite a dozen games in progress, nothing whatsoever for hours under 'Your turn'. Hmm.....

I'm confident that the developers can improve the system, mind you, we've seen several recent updates, plus the number of players online will increase and that will also help with making the experience more fluent. I'll report back in future.