Regular readers will know that I'm a big fan of the Proporta emergency chargers, from the tiny credit card sized Pocket Power to the mighty Turbocharger 7000. But, of course, there are many other brands on the market, especially at the higher capacity end of the market. Which is why I've been taking a look here at the new 'Kinkoo Infinite One 8000mAh Portable Backup Battery Charger'. In white. And yes, the colour matters, as I shall explain! 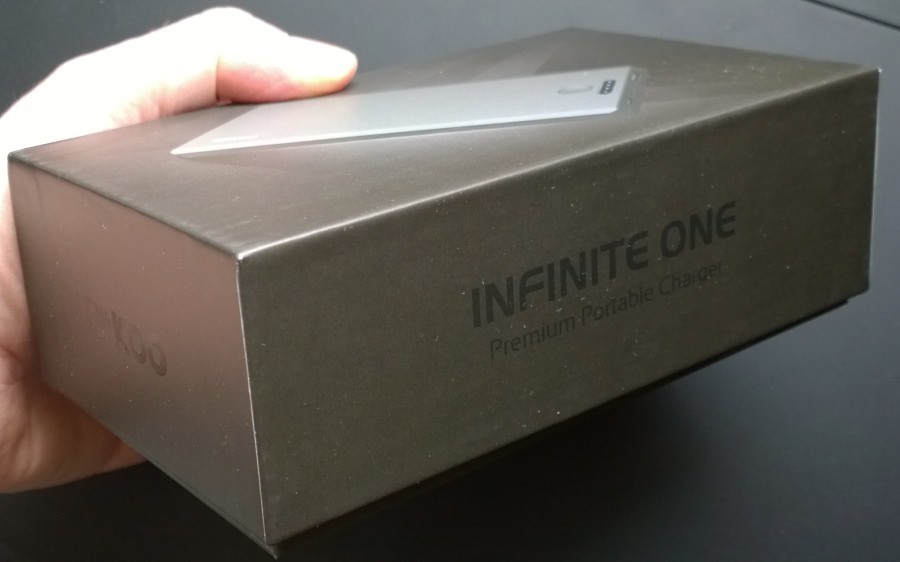 The Infinite One is beautifully/wastefully (depending on your point of view!) packaged, in a much larger box than is strictly necessary, thickly padded with dense foam to keep the contents in place: 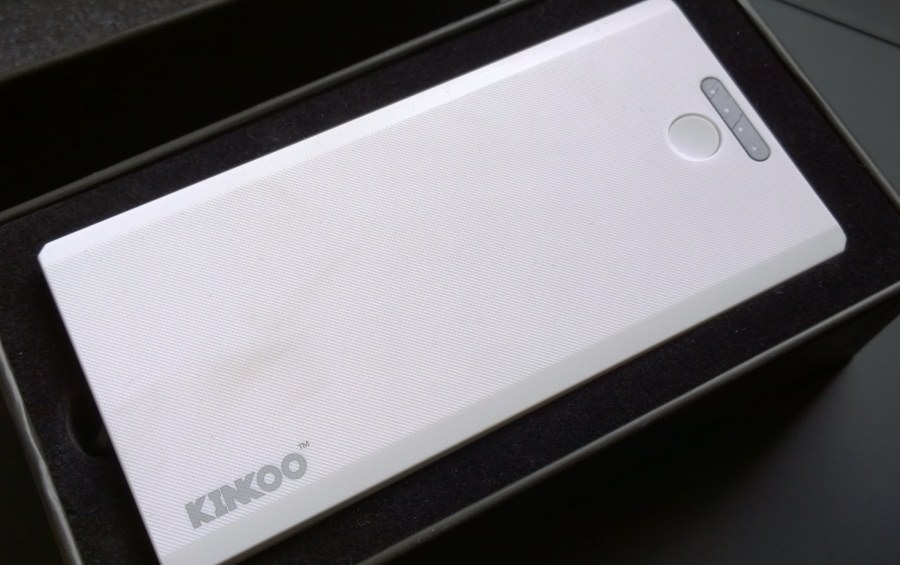 We were sent the 'white' Infinite One - which turns out to be slightly off-white, with the top and bottom surfaces textured for grip and (I suspect) to avoid fingerprints.

The idea is the same as other emergency chargers - a big internal battery, with microUSB input (e.g. from your normal phone/tablet charger) and full USB output (to be used with the supplied or your other normal charging/data cable). Of note is that the Infinite One uses Lithium-Polymer rather than Lithium-Ion, meaning slightly higher performance (at least in my experience).

The jacks here are a little on the tight size, but then I usually say this with accessories and then 'loosen up' with use. 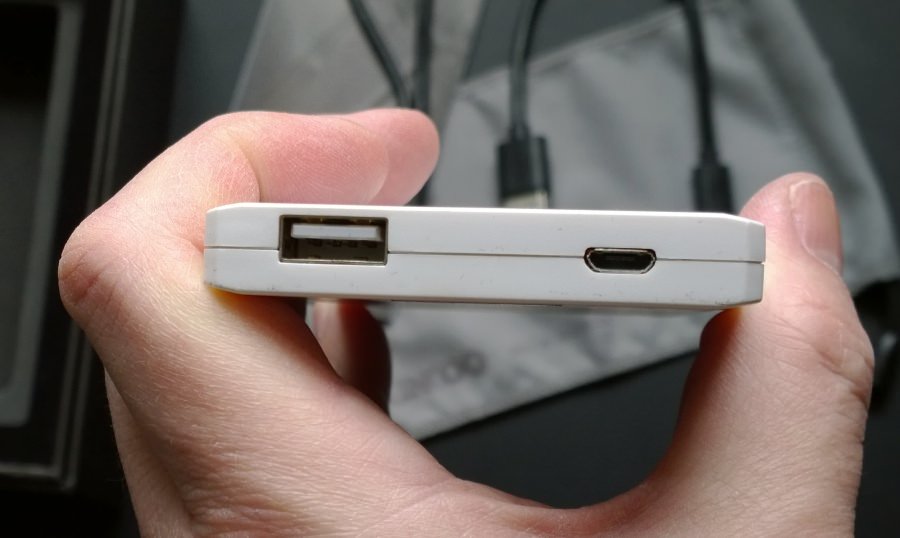 Supplied with the Infinite One, in addition to a carrying case, are two USB to microUSB cables, one 20cm long and one 100cm, so just take the one you want (or both) - a nice extra from Kinkoo: 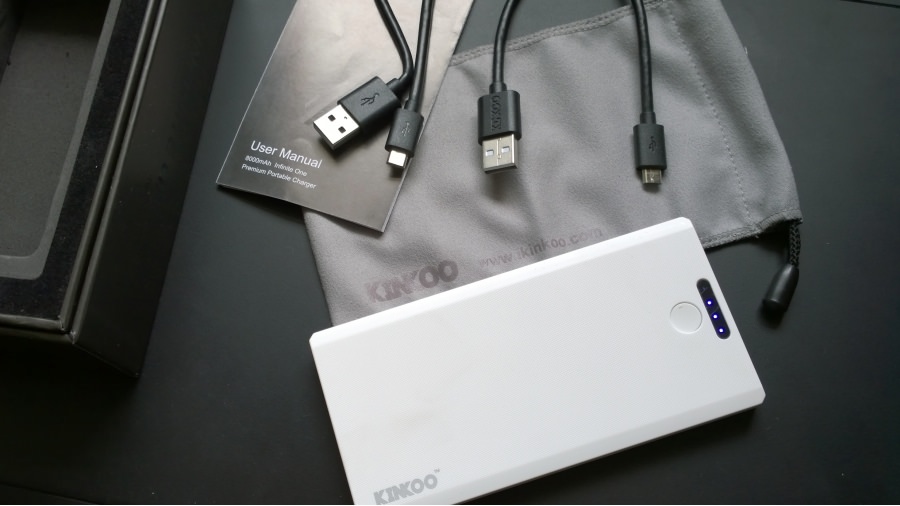 At one end of the Infinite One's main face are four LEDs - these blink while the charger is being err.... charged, gradually 'filling', with each LED nominally indicating 25% charge. The button is to start charging and activate the LEDs, as is the convention with such chargers. 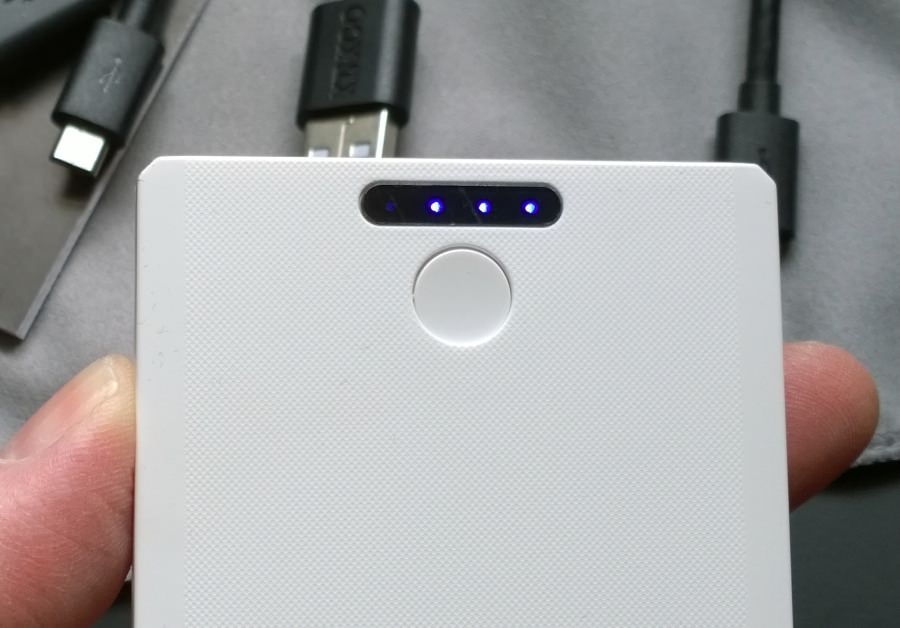 Now to capacity and performance. As you'll see from the specs below, there are no issues with output, with the charger able to happily charge my Asus-made Nexus 7 tablet, for example, plus everything else I could find with a microUSB input socket.

Charging the Infinite One itself takes a while, of course depending on the current rating of the mains charger used. None comes in the box, so you'll be relying on that which comes with one of your devices. As a guide, a typical Nokia or Samsung phone charger will take up to 10 hours to fully fill the Infinite One - so an overnight job, effectively. 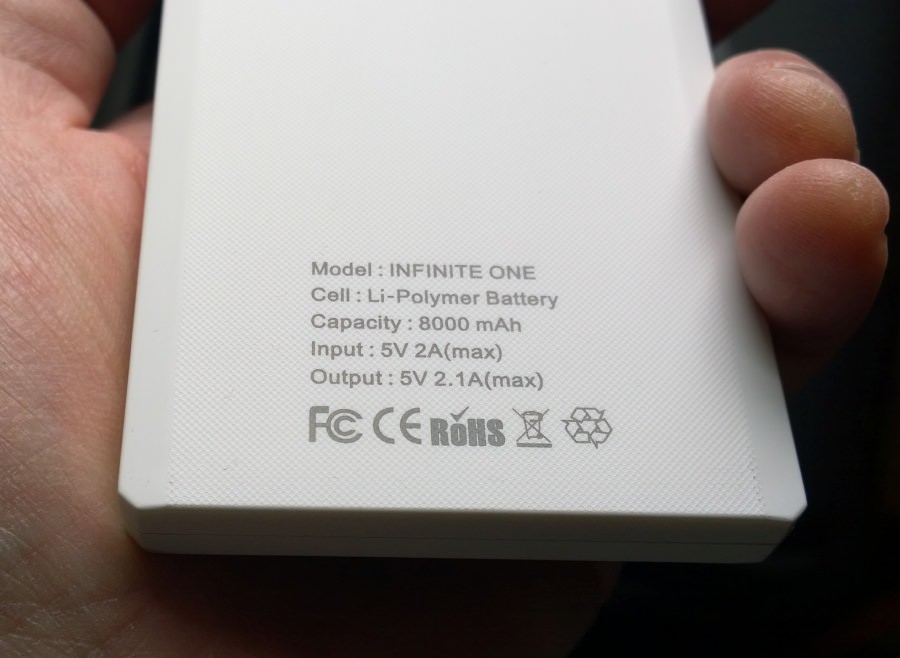 Now, it should be emphasised that for all such chargers, just because the specs say 8000mAh doesn't mean that you can, for example, charge a 2000mAh-rated smartphone battery four times. The transfer process is inherently lossy, with heat generated in the charger, in the cable and (mainly) in the phone/battery being charged. 80% is a good figure to work with here, meaning that you can expect to pour about 6000mAh into devices from one Infinite One charge.

My first few operations yielded less than this, about 5000mAh, but then I've talked before (external link) about Li-Ion and Li-Poly batteries taking a few cycles to bed in properly and achieve maximum capacity, so it'll be at about 6000 usable mAh within a few weeks, no doubt. Again, transfer efficiency is something all backup batteries are faced with - just make sure you take this into account when specifying an accessory to match your needs!

Also worth noting is the colour. You'll see from the photos above the colour and texture of the 'white' Infinite One. After a few days of use it was already starting to show small discolourations from fingerprints, etc. Not a criticism of the accessory per se, this is common to any textured, off-white gadget, but given that there's a black option too, I think I'd highly recommend you picking that in the shopping basket instead.

Or maybe it's down to your sense of style and off-white works best for you?

The Infinite One is well made and decent value overall. The world of emergency chargers is very crowded these days, with everything from ultra-cheap eBay-sourced units to premium accessories like this. Tempting though it is to go for the cheapest option, Lithium batteries are tricky customers and I'd recommend going for something with brand and documented quality control.

Two things which Kinkoo has here and the Infinite One is recommended.