As a (not very good, but I do try) musician myself, I tend to get a little dismissive of novelty applications that claim to help non-musicians compose tracks, but Trap Pad is sufficiently focussed on assembling and overlaying samples that it's strictly for either 'ideas' or 'fun' use - at which point it's much easier to relax and just enjoy the possibilities.

The idea behind Trap Pad is to have a multi-touch, multi-colour pad, each of which is assigned to a specific sound sample - either a percussive track or effect, or a synth wash, a jingle, or a voice, etc. By holding down various pads with various fingers (think a hand-sized version of the popular living room game 'Twister'!), the sounds overlay as needed and you can create short sections of electronic music and effects. And yes, there's a 'record' button, for listening back to your impromptu masterpiece!

As you touch each pad, it illuminates, for visual confirmation (though impossible to capture on a screenshot, which is why those below look a little muted), and its sample starts to play, multiplexed over anything else that's currently playing - there's no rhythm sync, so you might need to time your initial taps properly. 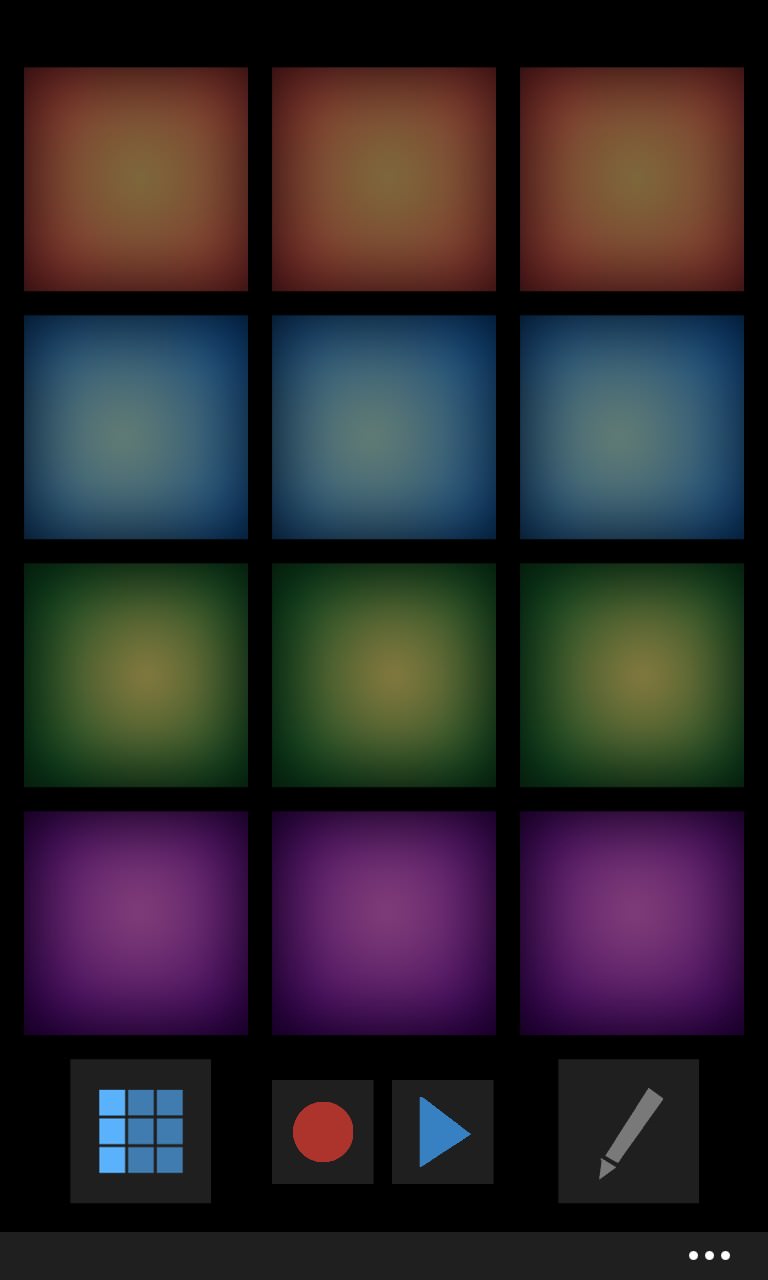 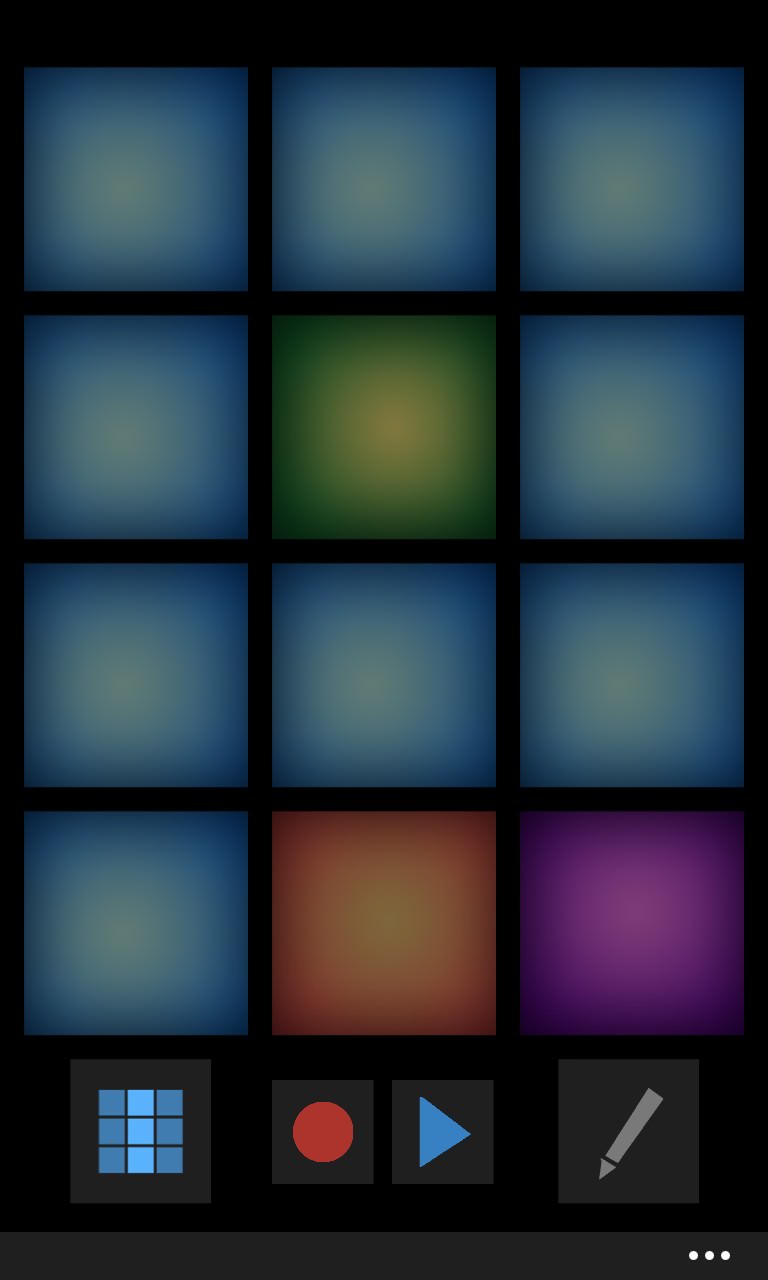 In fact, what you get in the main interface are three banks of 12 pads, though you can only play one bank at a time. So perhaps you might have one bank configured for noisy, brash stuff and another for mellow sounds and rhythms, and so on.

The word 'configured' is key here though - the default set of samples in each bank of 12 are unlikely to be perfect for whatever electronic soundscape you want, so quite a bit of experimentation will be needed to shuffle all the sample allocations around as needed. As you might expect, there are 36 provided for free (each of which can be tweaked, see below) and there are two more in-app-purchasable sets of 12 - any of these samples can be selected for any pad in any bank.

The catch is that there's no drag and drop or any kind of hyper-intuitive system for organisation - instead you have to go into 'Edit' mode and then tap each pad in turn, tapping 'select' and then navigating through the available sample packs and drilling down as needed. The system works, but it could take a while to set things up as you like them. 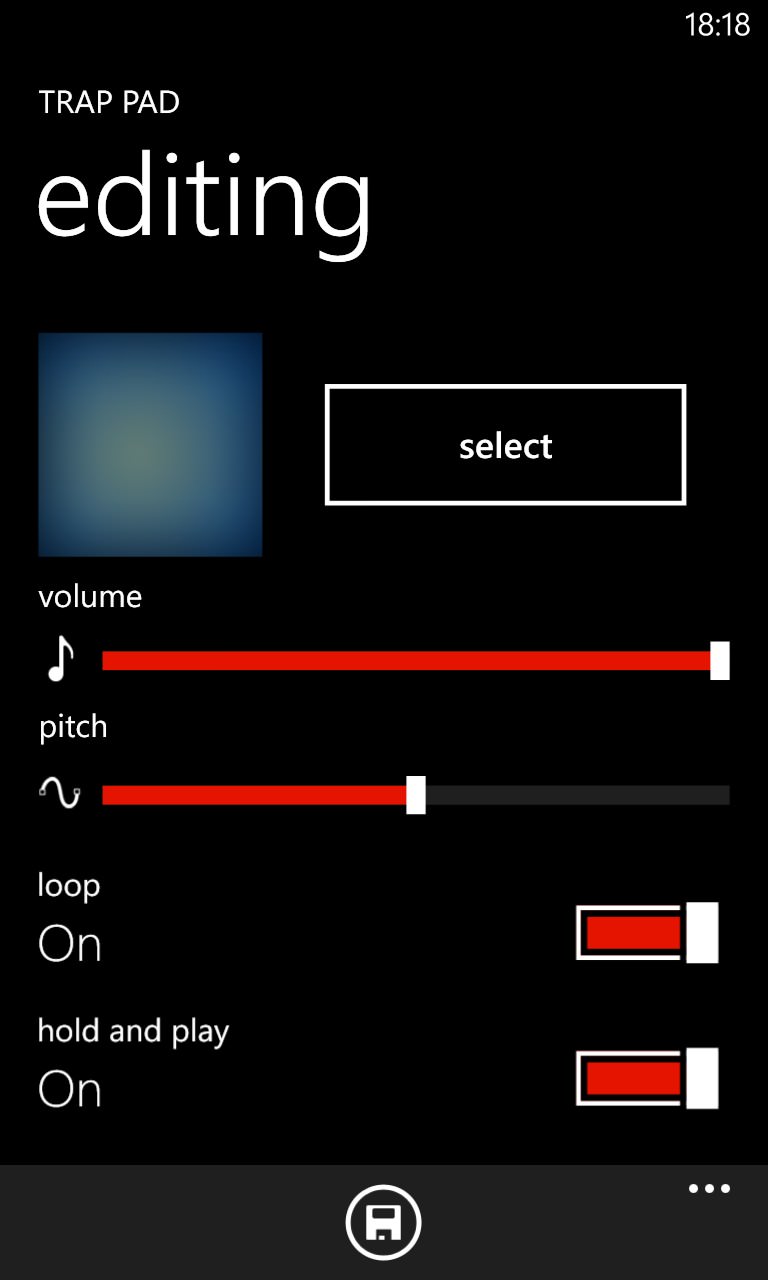 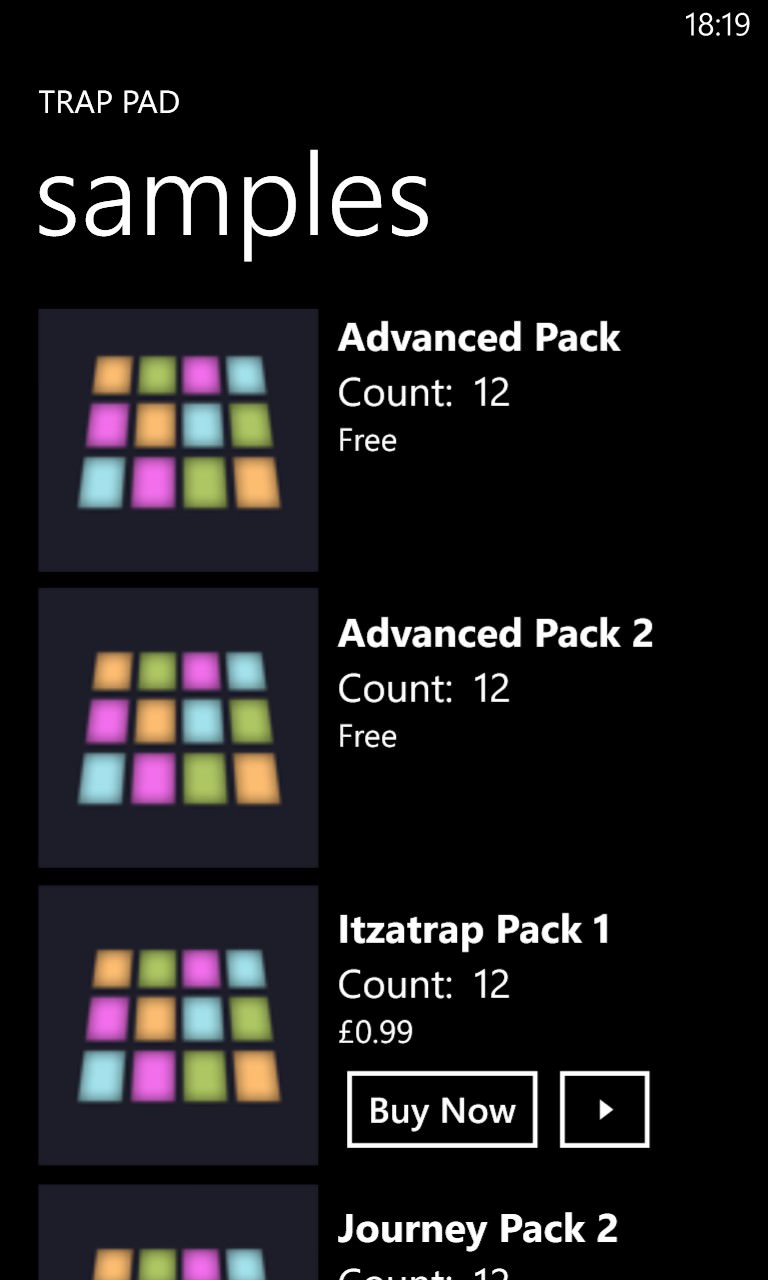 The overall count of 60 samples sounds a bit small, but any of these can be adjusted in pitch (or key, if you think musically), which gives them all a little more flexibility and variety, plus their playback volume is easy to adjust as well, in case you want to assign them a less prominent role.

The 'hold and play' setting is on by default, but turning this off kicks samples off with a touch, though you do also lose the 'loop' facility, which I found odd - for less dextrous players, surely the facility to kick a looped sample off and have it repeat until (say) tapped again might be useful? One for the developer to ponder, I think.... 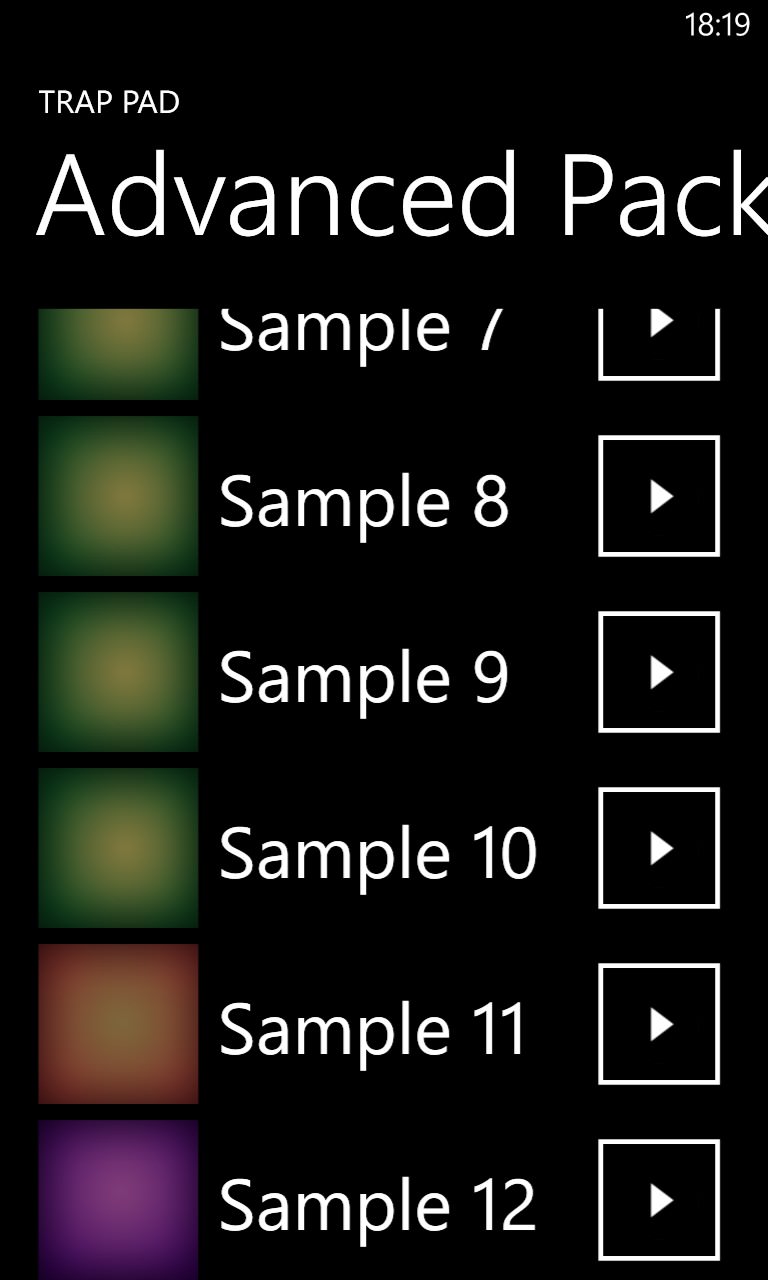 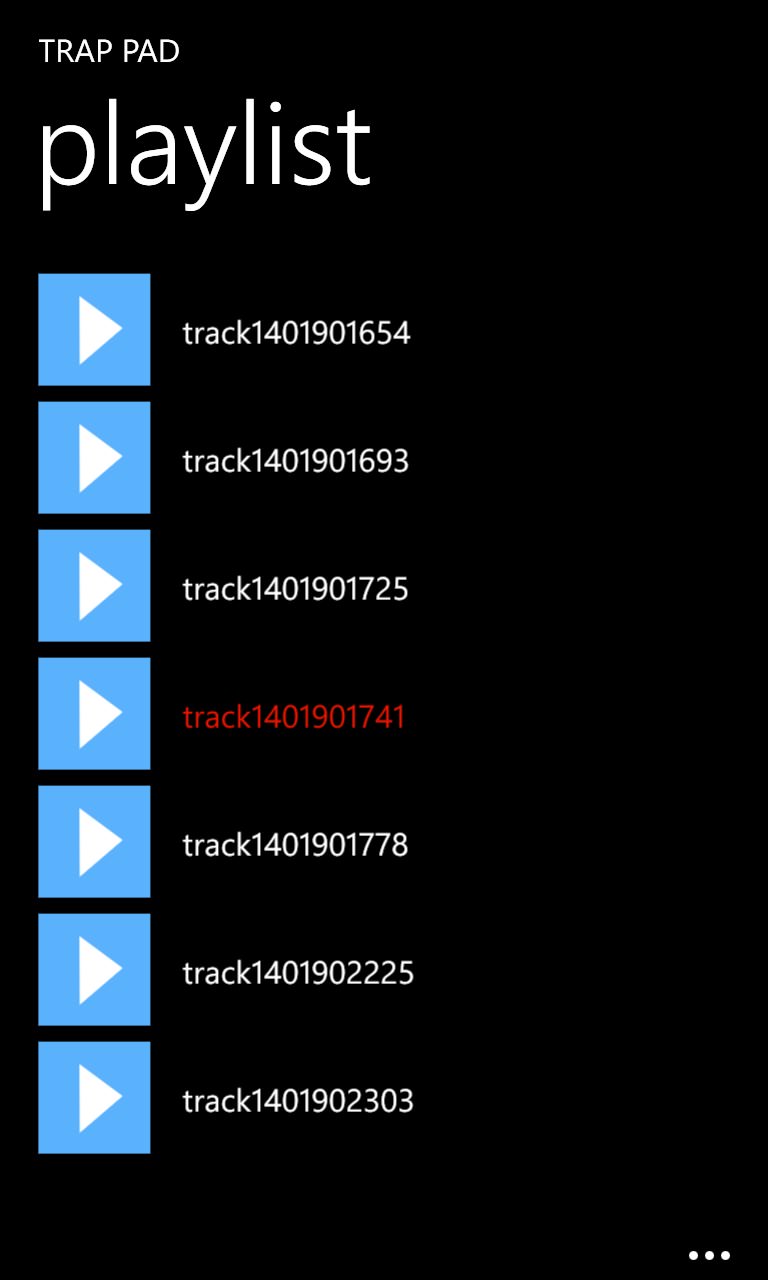 Tapping record before trying to play something dutifuly records your efforts, though it's not clear whether an actual render is being saved or (more likely) the track is reconstituted from your taps and sample selections - there's certainly no way to export the audio in any way, again reinforcing the fun/demo aspects of the tool. If you did hit upon a magical combination of sounds than you'd have to record the audio for posterity via the headphone jack or speakers, for example.

The multitrack compositing is a good advert for the speed and responsiveness of Windows Phone as an OS, but as a musical tool, Trap Pad still needs some development. It's free to try out though, you'll know whether you want to keep it long before you need to experiment with the extra two IAP sample packs.