If you're a fan of smartphones - or at least enough of a fan to be reading this - then the chances are that you like gadgets too, specifically radio-controlled gadgets. In a pretty good simulation, in 'Helidroid 3 : RC 3D Helicopter' you're effectively left to play at home (with swimming pool, too!) and no interruptions, with three r/c helicopters and a variety of challenging 'missions' to accomplish. Easy to get started with, hard to master (in terms of time and stars), my only complaint here is that I'd like to see more variety and more missions.

One of the frustrations of radio controlled stuff in real life is that batteries don't last very long - the ratio of playing to waiting is quite low. In 'Helidroid 3 : RC 3D Helicopter' every helicopter can fly forever and there are no recharging times. Happily there are no crashes either - with r/c planes and choppers it's just so easy to hit a tree or (usually) the ground too hard and then it's rebuild time. In this game, you fly and dodge and weave and hover and climb, with the only limits being that you can't go far beyond the boundaries of the house and grounds. 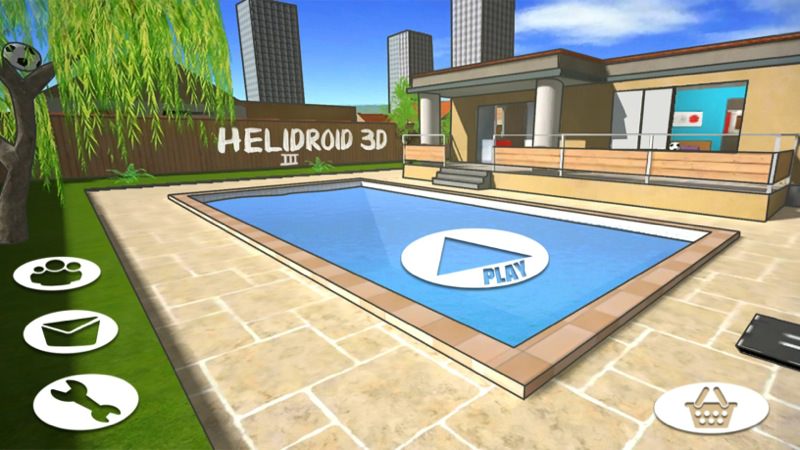 The opening menu sets the scene. Your new play-house?

There's still plenty to explore though, in terms of detail and furniture and textures, plus the radio control of the choppers is silky smooth. There are three options - simplified r/c with gyro stabilisation, which is what I used and works well, keeping the aircraft in check without too much spiralling out of control, plus an advanced 'real' set of controls and an accelerometer-based set, should you fancy either. 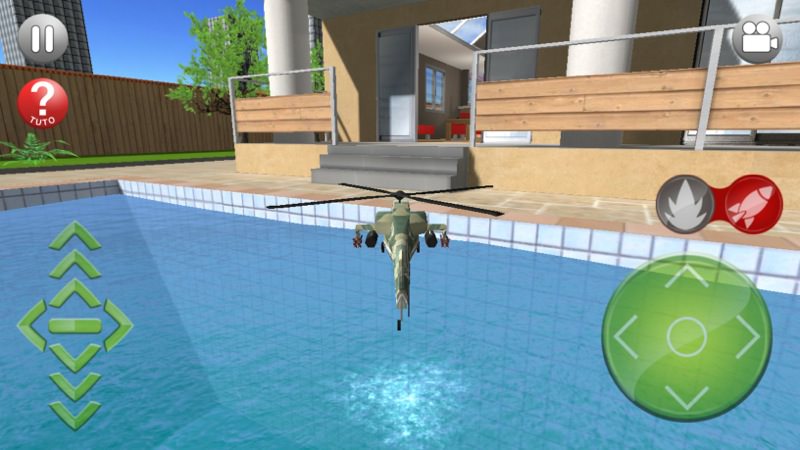 These are the default 'easy' controls. Note the particle effects on the water surface from the rotor wash...

The goal of each mission is to achieve a specific task, flying a certain route or following another r/c aircraft, or picking up objects, even water from the swimming pool and then dropping/dispensing them as required. The pool is notable in that it's the one thing you can crash into - submerging quickly and that's the mission over. 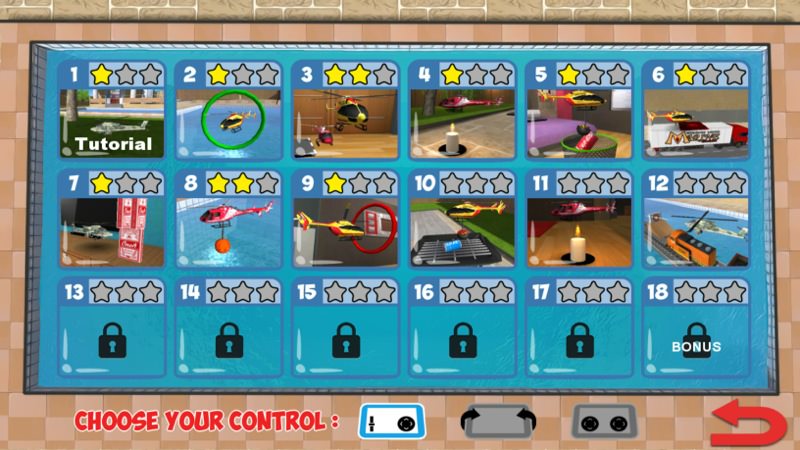 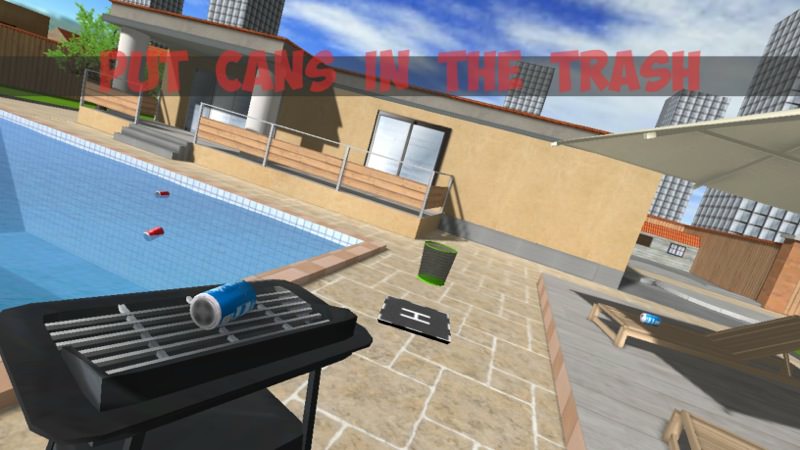 Each mission is preceded by a 3D walkthrough, setting the scene and explaining what you have to accomplish...

As with many games based on levels, with different star ratings available, you can simply play through to try and 'pass', ignoring time and stars, or you can go back and retry levels to get a higher star score and faster time. 'Helidroid 3 : RC 3D Helicopter' helps here by explaining in the splash screen for each level what targets you need to hit in order to get each rating. For example, in one level you have to use a r/c Apache gunship (no, really) to clear a train track of targets before a toy train hits them and de-rails. Achieve this without using your machine gun (again, really), using rotor wash to blow the targets over in time, and you get three stars, muddle through with train de-railment damage being less than a certain quota and you get two, simply get the train to the end of the track and you have one star. 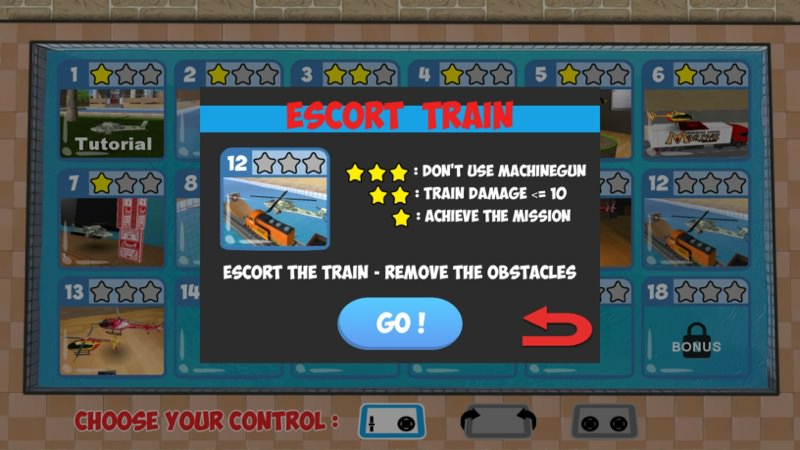 Stars are awarded intellgently and logically.... 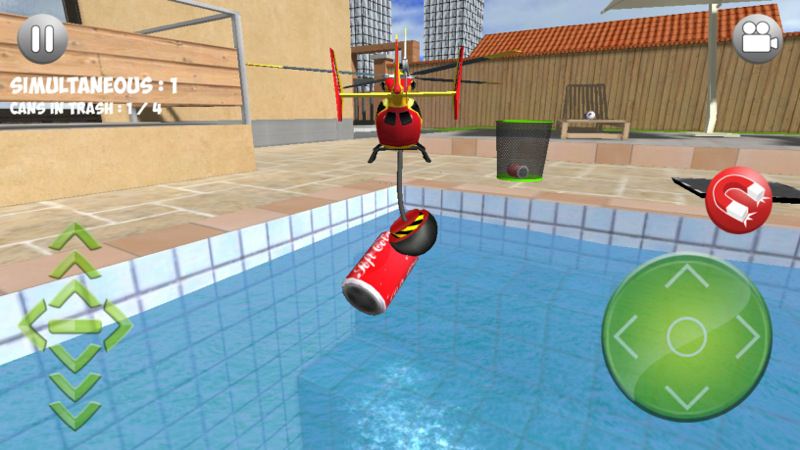 Taking a can (via the magnetic grab) over to the bin. Note the 'release' button - each copter type has a different action control...

The puzzle/star system is well pitched and, even after completing all 18 levels supplied, you can go back and retry levels in order to get three stars across the board - trust me, some of them are very hard indeed. Add in that all your r/c flying attempts are timed and there's replay value in trying to beat a previous time too.

It's clear that the missions are all hand crafted and tuned (in terms of what you have to do, where objects and obstacles are placed, and so on), but the game hasn't been updated since its launch in April, and I did note that many more (though different) missions are available in the previously released iOS and Android version, so presumably the Windows Phone version was something of an experiment and I'm hoping that the likes of this (mainly positive) review might generate enough interest on this platform that the developer might revisit the title and expand it.

The missions, such as they are, do contain some repetitions (e.g. flying through sequences of hoops, picking up magnetic cans), though at least the second time you encounter each style, the difficulty is ramped up.

Although largely glitch free, I did note one huge startup bug (knocking five points off the score above) - the game boots to a blank screen, after which the trick is to power the screen off and then unlock it again, after which the game proceeds normally. This would obviously have worked for the developer on release, so I can only assume that something in one of the Windows Phone platform updates has broken something under the hood. Something for the developer to attend to, and urgently - though at least you now know the trick. 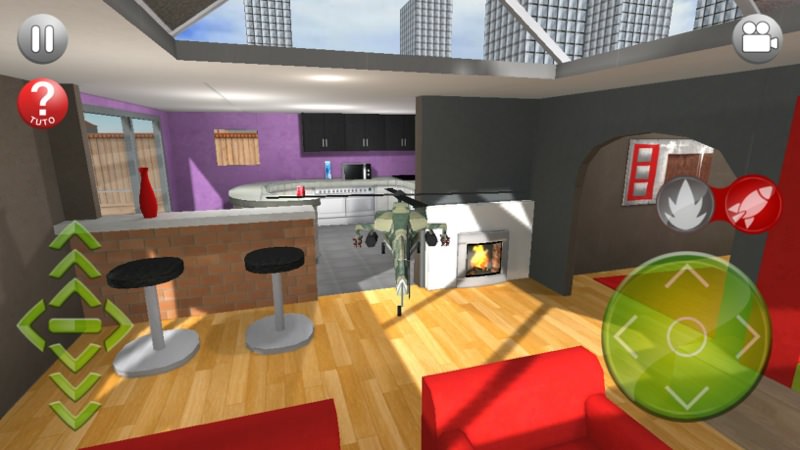 Flying through the 3D-rendered house....

The startup bug aside, this is a very pleasant, smooth and surprisingly addictive game on Windows Phone. The trial is very generous, offering half of the 18 missions - it took me about half an hour of gameplay to get through the first nine, and then it's only a pound or so to buy/unlock the rest of the missions through the in-app-purchase in the Windows Phone Store. Another hour's play got me most of the way through the 18, with only a couple that stumped me, though many missions weren't exactly aced - see the replay comments above. Potentially, trying to get three stars across the board might mean dozens of hours of gameplay. 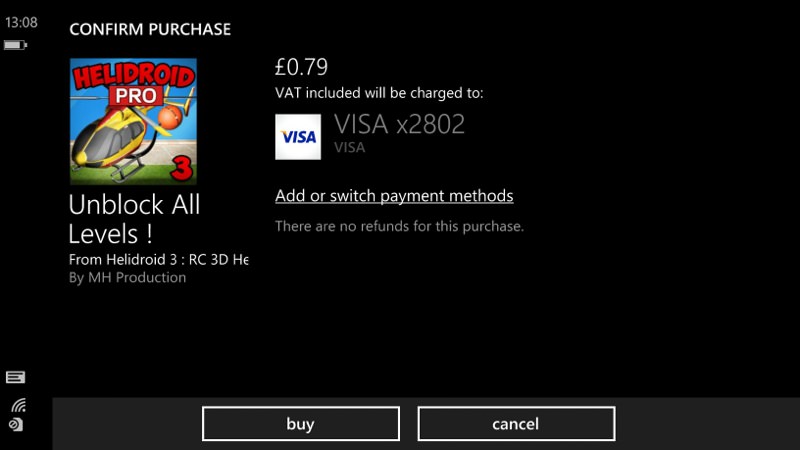 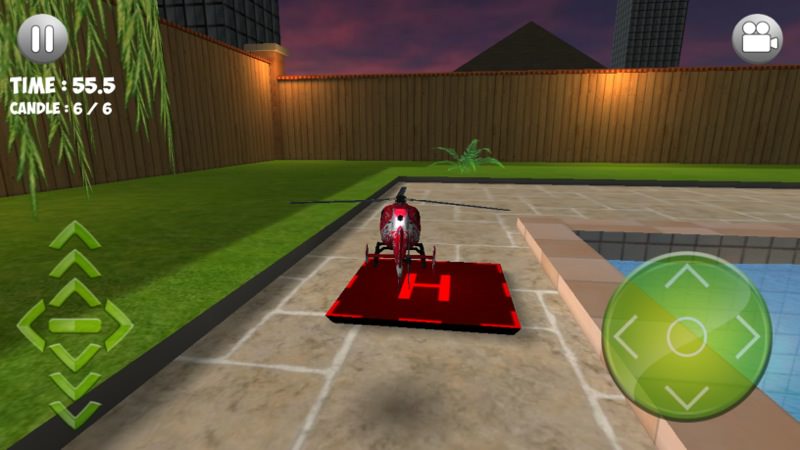 One nice touch is that you don't have to complete every mission in order to unlock the next one - there's a couple of missions leeway, meaning that if you get stuck on one, you can still proceed with the rest of the game. Other developers, take note! 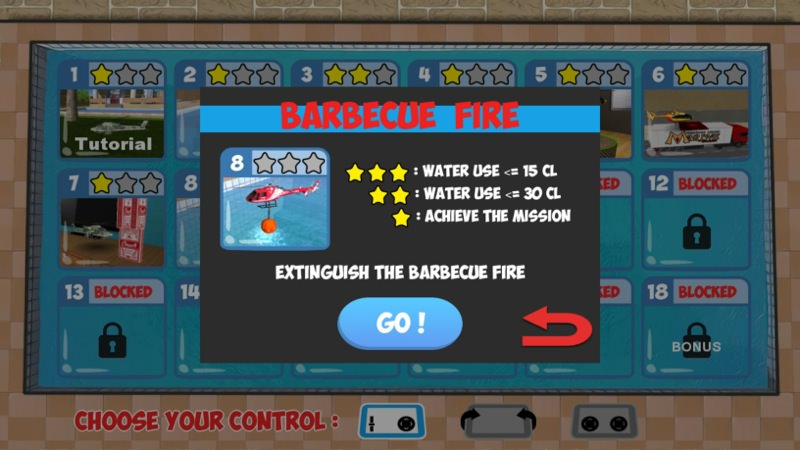 More star instructions, here gauging if you can put out a fire in the most efficient fashion!

Recommended if you have any affinity whatsoever for radio-controlled gadgets or indeed for real-world-based sims/puzzles.