Outrageously (way beyond fashionably) late to the party, Candy Crush Saga has arrived on Windows Phone. Trailed by legendary tales from friends and colleagues on iOS and Android who have had their lives ruined by getting addicted to this 'delicious puzzle adventure'. It's freemium, of course, so let's see how it balances out on Windows Phone. Whatever happens, it's another of the high profile apps and games that was apparently missing and is now present and correct, so colour me happy(ish) and time to unwrap another celebratory candy...

Candy Crush Saga has a huge history behind it on other platforms, so it wasn't a surprise to see it a) arrive very mature, with every conceiveable game nuance already in places, and b) arrive looking as if it didn't belong on Windows Phone, with unfamiliar controls and fonts - implying that the code and resources have been ported relatively crudely (but effectively) from iOS. 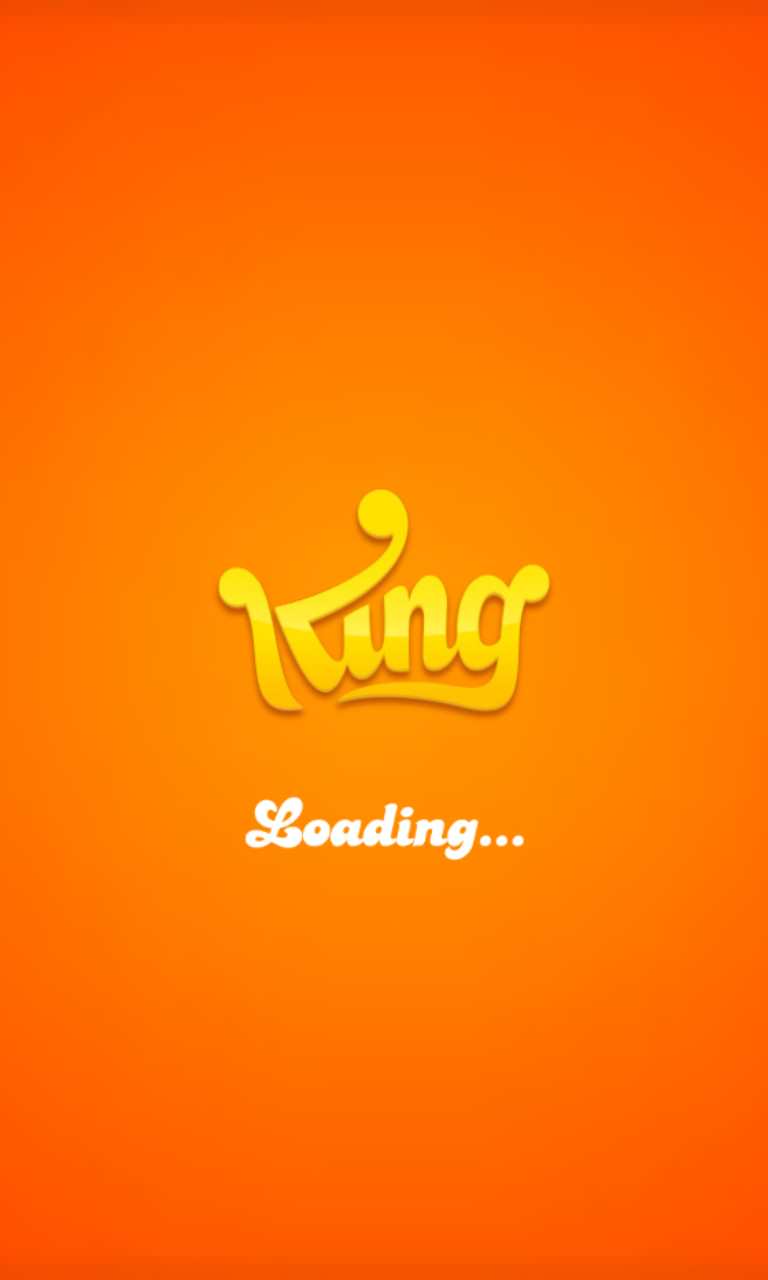 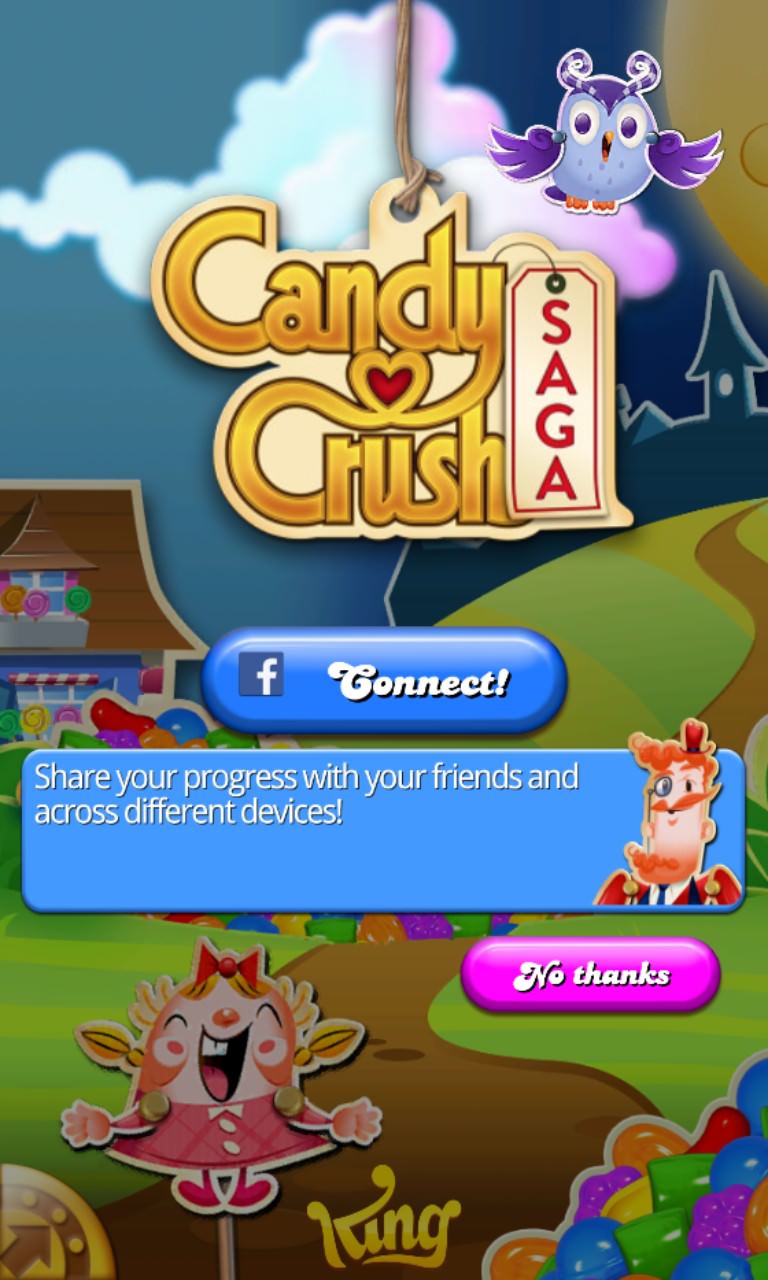 What matters though, aside from the sheer presence on the platform (so no more sneering "What do you mean, you can't play Candy Crush Saga on that thing?" taunts from your friends), is that the money making scheme for the developers game is intact and plays exactly as it does on the likes of the iPhone. At heart, it's a 'match 3' game, in a world of sweets and candies, but the difference here is that there are a mountain of candy types and special rules, plus balancing stats of various candy colours, all introduced in ever-increasing intensity as the scheme game progresses. Quoting from Wikipedia (since there are no explicit help screens within Candy Crush Saga and since I'm bound to get something wrong otherwise):

Different "special candies" can be formed by matching a combination of 4 or 5 in a certain formation, such as a "Striped" candy (which clears either an entire row or column), a "Wrapped" candy (which acts like a bomb; clearing the 8 surrounding candies, falling, and exploding one more time), or a "Color Bomb" (which removes all candies with the same color of the one it is matched with). Special Candies can also be matched together, producing varying effects; for example, matching a color bomb with a striped candy turns all of the candies of its color into striped candies, which are immediately detonated.

Other special candies which appear on the boards for free can be purchased from the in-game store, or won from the Candy Crush Booster Wheel. These include Jelly Fish in jelly clearing boards which clear 3 pieces from the board at random, the Coconut Wheel on ingredient dropping boards which changes three candies in a row into striped candies, and Lucky Candy in recipe boards which when matched change to one of the types of pieces the player needs to clear the objective. The Booster Wheel also offers a chance to win a jackpot of all boosters in one spin. Other pieces known as Blockers appear on boards to add to the challenge: Icing (also called Meringues) cannot be moved and can only be removed by matching next to it, Liquorice Locks cage off single pieces of candy to prevent them from use, Chocolate pieces will multiply if not cleared, Liquorice Swirls cannot be easily removed with Special Candies, Candy Bombs will explode and end the level early if they are not cleared, Multilayered Icing requires multiple matches to remove, Chocolate Spawners will produce Chocolate pieces at all times, Marmalade guards Special Candies from use, Cake Bombs can clear the entire board once cleared, and Toffee Tornadoes move on the board destroying pieces and shattering the tile beneath them to prevent use for one turn. Other pieces also appear on levels such as Chameleon Candies which switch colors every turn, Mystery Candies which randomly turn into a Special Candy or a Blocker, and Extra Time Candies on time limit levels.

The player can also purchase various Boosters to attempt to win levels more easily or extend play after a lost level; Lollipop Hammer clears a single piece from the board, Extra Moves can be purchased if running out of moves at the end of a game, Free Switch allows players to switch two pieces that do not possibly match, Sweet Teeth to clear out Blockers and Jelly, Bomb Coolers to add onto Candy Bomb timers if the timer runs out, and the Bubblegum Troll to stop Chocolate Spawners from spawning chocolate from its sides. The Dreamworld levels have their own special boosters: the Restore Balance booster to reset the Moon Scale for 5 turns and the Moon Struck booster to automatically activate Moon Struck.

That's a lot to remember (and that was just part of it!), though of course the candies, specials, features, boosters and balances are introduced one by one (by the 'candy king'?) so as not to overwhelm the casual player. It does seem, from hearing others talk online, that the subtleties of the various obstacles and power-ups can be mastered, despite the apparent complexity.

Momentum is kept up through rapid progress in the early levels, with simple targets, through praising messages ("Sweet", "Candilicious!", that sort of thing) and atmospheric music and effects. Although not strictly designed for Windows Phone, leeway is always given to games - as I mentioned before, the graphics and elements do look at each stage like they've been scaled down from some other device (which they have), but it all remains colourful (in a pastel fashion) and eminently playable. And, after an hour of play, I even found myself enjoying it and wanting to finish 'just the next level'. 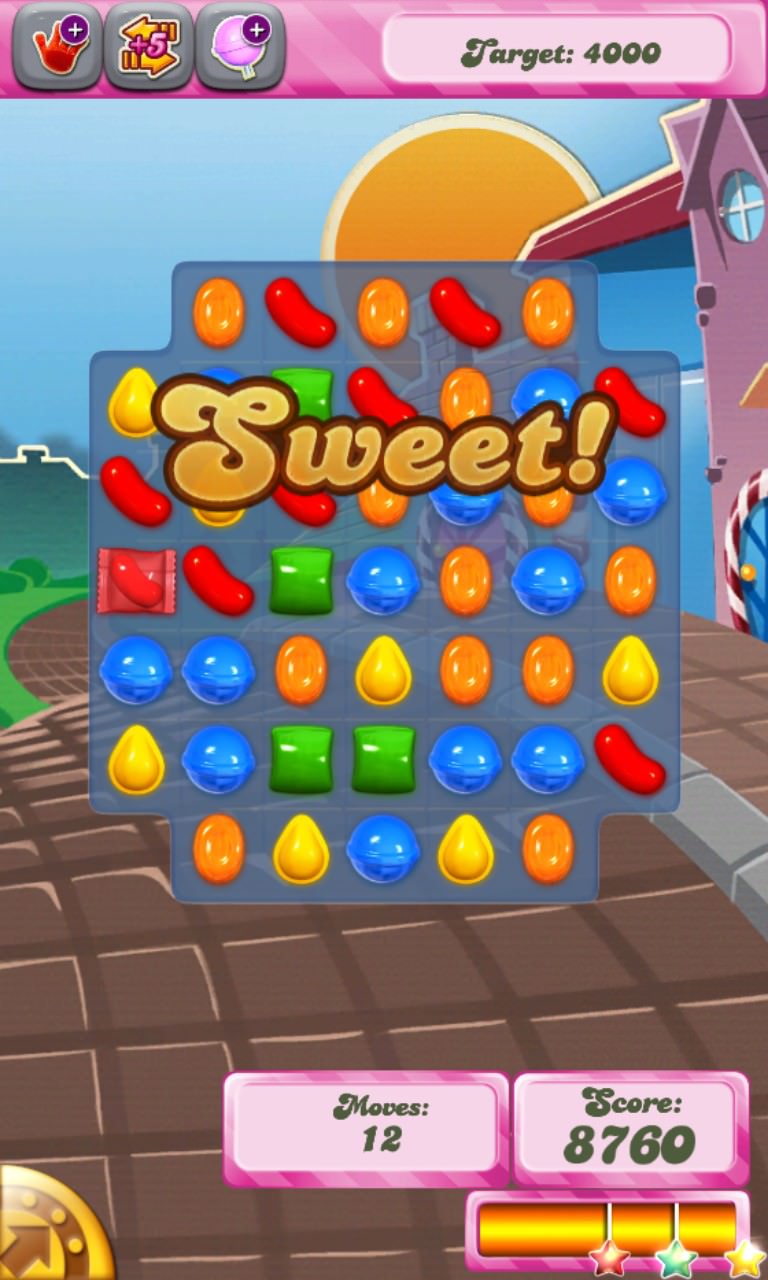 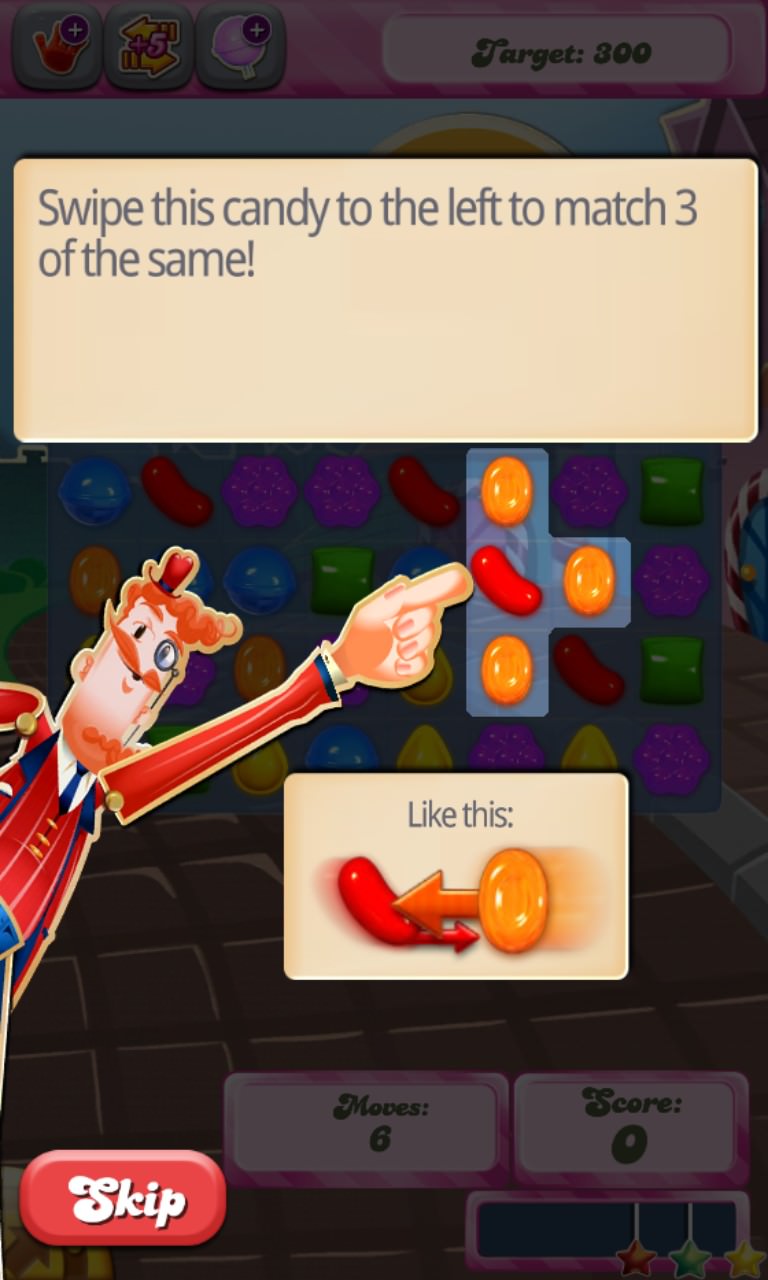 Which is, of course, where the addiction starts, and also where the freemium model starts to pay dividends for the developers. Rather innovatively - or cynically, depending on your point of view - there are multiple mechanics in play. Levels are grouped into episodes, which remain locked until you pay to unlock them or connect up via Facebook and trade 'requests' from your Candy Crush Saga-playing friends. Ditto when you fail to solve later, more difficult levels and lose all your default five 'lives', at which point you have to again beg your friends for 'connected' help, purchase lives in the app or wait half an hour per 'life'.

The upshot is a careful, managed balance of freemium and social action that sees the game spreading (virus or wild success? - opinions will vary!), providing (lots of) money for the developers and 'sweet' fun for players at the same time. It's arguably a win-win - and at least Windows Phone users get to experience it all now and see what the fuss is all about. 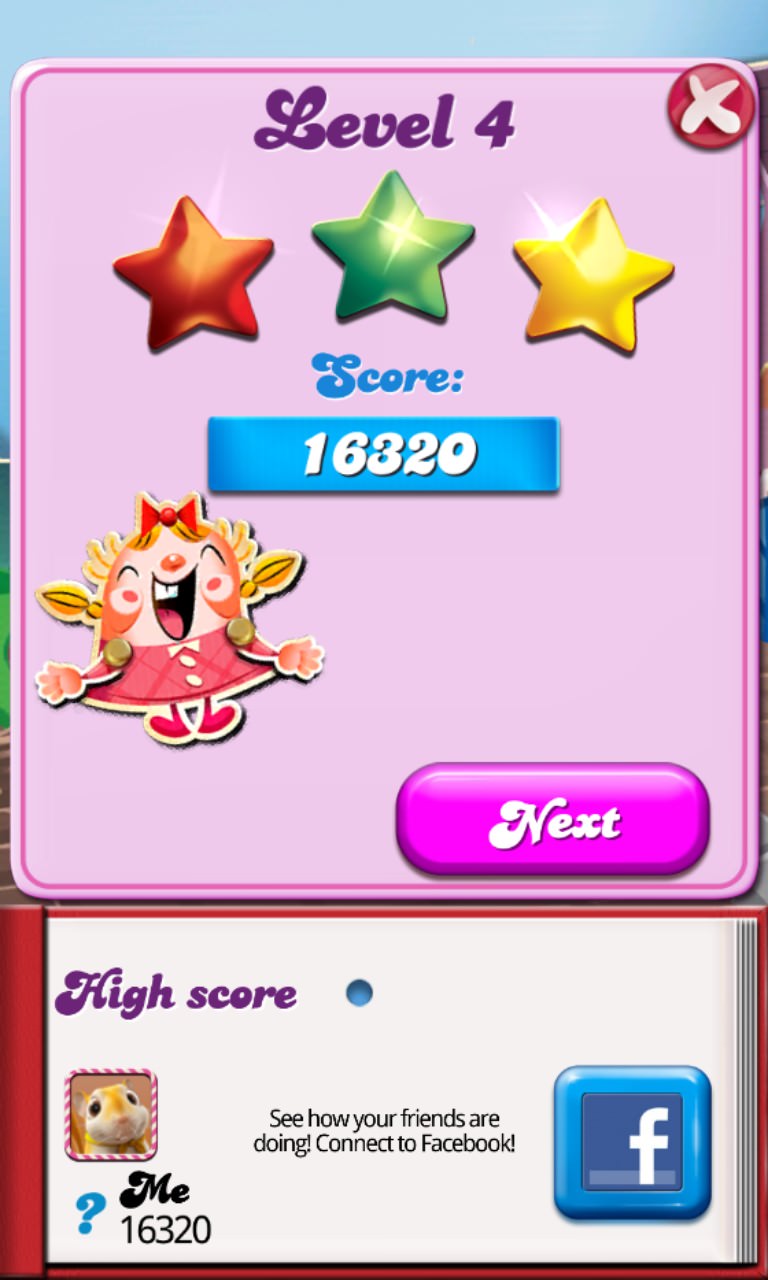 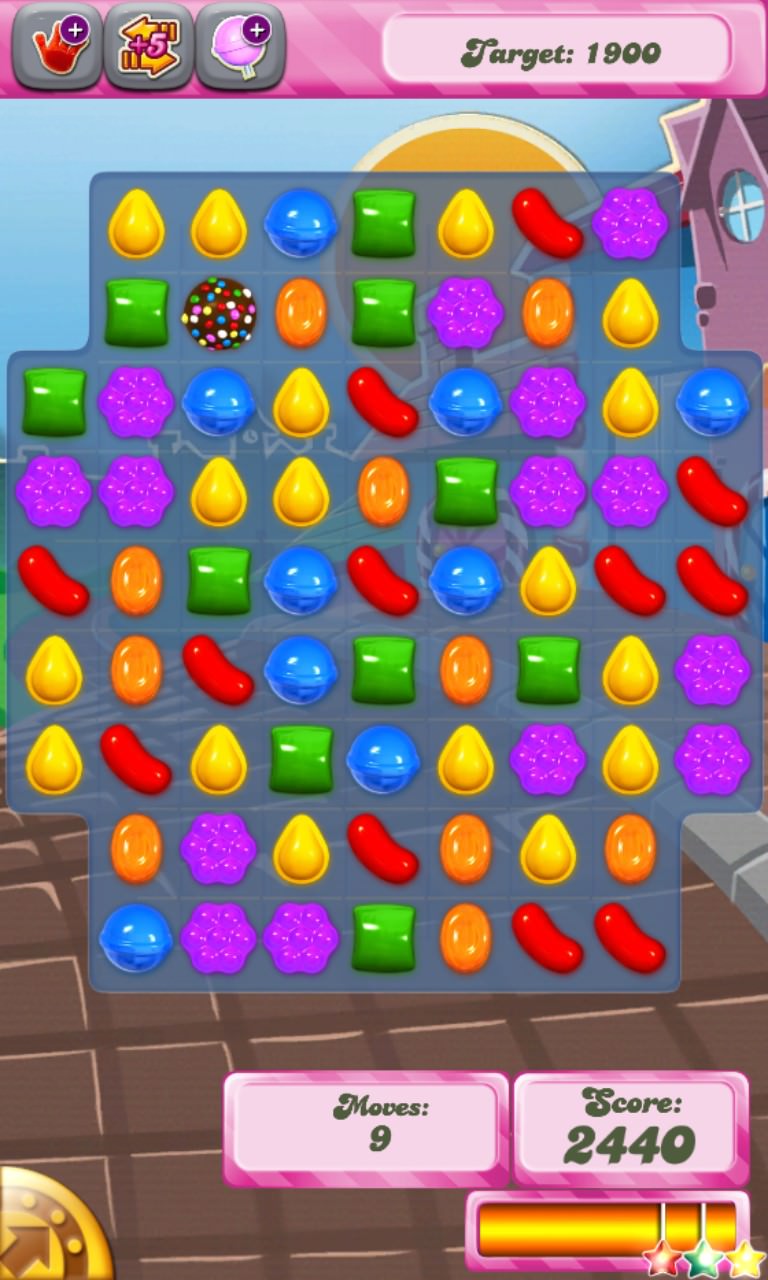 I've been critical of the scale of in-app freemium purchases in other titles and I'm going to do the same here. In addition to all the life/episode freemium mechanics just mentioned, you can 'pay to play', of course, buying lives and episode tickets with gold bars. No, not real gold bars, of course, but the in-app currency, with the maximum purchase being a whopping £50 or so. This just cries out for mis-use (typically by kids who have also memorised your PIN code - been there, had that done to me....) and yet again, I'd like to see a freemium 'cap' for games to a more sensible level, such as £10. 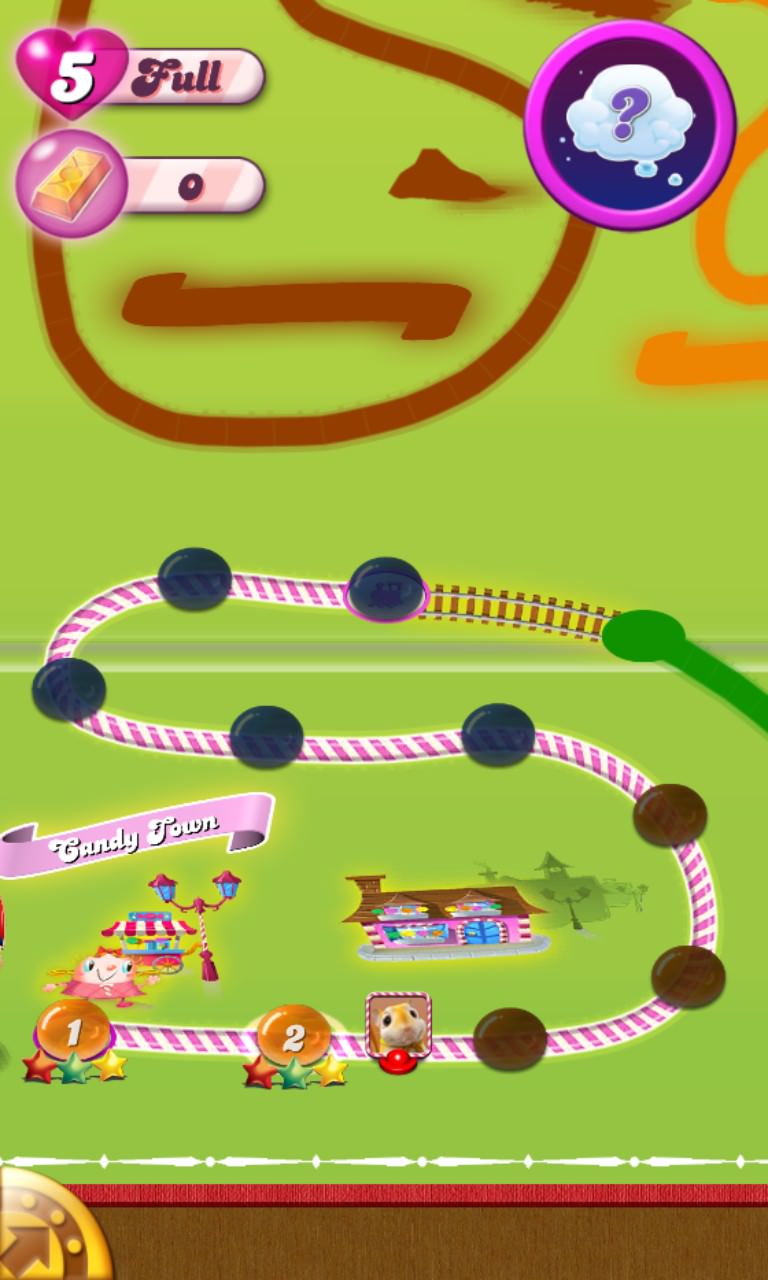 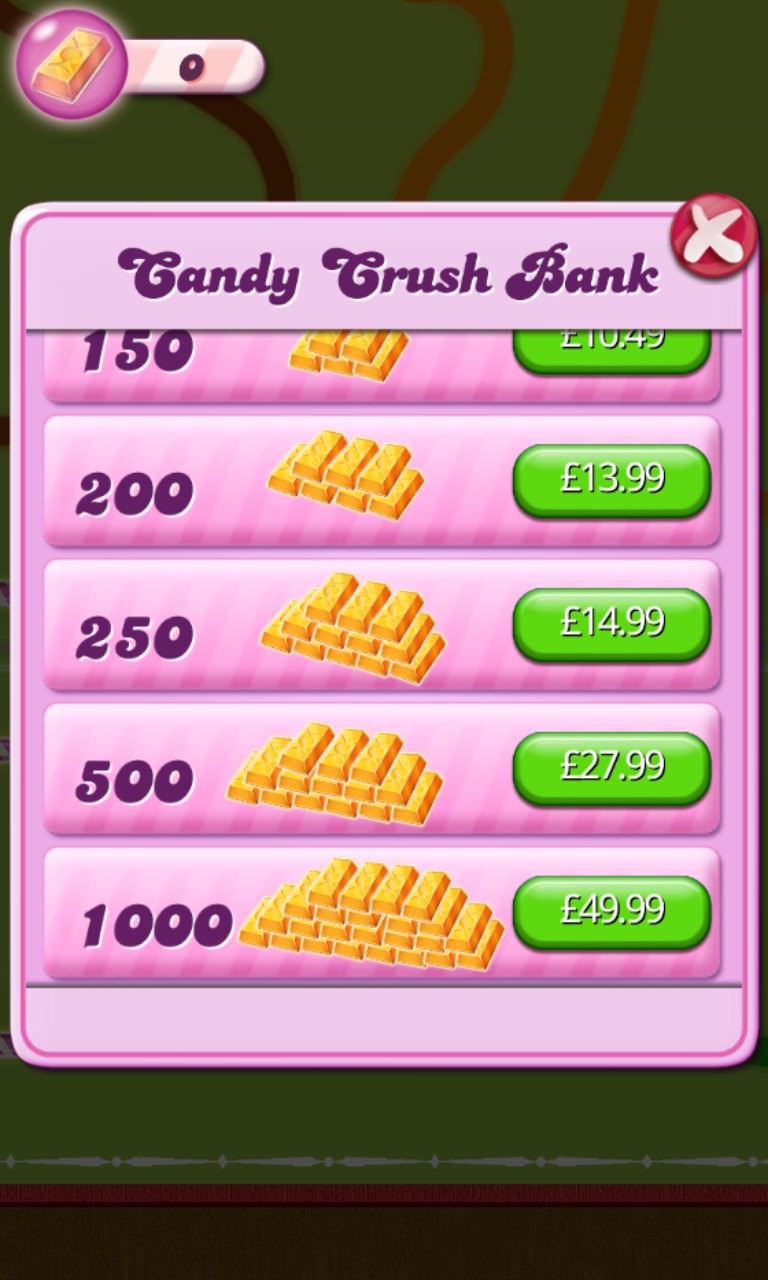 Cynicism over the freemium angle aside, it's hard to argue against Candy Crush Saga - there's a reason it has become so successful on other platforms. It's quick, it's colourful, it's fun. And, even though I personally won't be spending a penny in it, there are others who have racked up tens or even hundreds of pounds, apparently.