Yes, yes, Pocket Casts does indeed arrive into a very crowded genre on Windows Phone, yes, it's still early days, there are some rough edges and there's no video podcast support yet, but I've been using it exclusively for the last week and have been pretty impressed overall. It may not have all the bells and whistles of Podcast Lounge, but for pure and fast, straight down the line audio podcast listening and management, Pocket Casts is hard to beat.

Wind time back a couple of years and Windows Phone had no podcast applications at all. You had to subscribe via Zune and then (if I remember right) access podcasts as part of the Music hub (in Windows Phone 7). Maybe the very fact that there was this gaping hole in the market was what encouraged developers to leap in with both feet, for we've since had twenty podcatching apps for the platform.

Of which the latest - and arguably the best, depending on what you need - is Pocket Casts, arriving with a well-founded reputation on Android and iOS. Moreover, it arrives with the ability to sync not only podcast subscriptions but where you've got to in each, in your listening, across multiple devices and multiple platforms. For anyone with a Windows Phone and a.n.other device running another smartphone or tablet platform, this is very much a unique selling point. The magic is made possible because Pocket Casts eschews Windows Phone platform services and other cloud syncing/importing solutions in favour of a custom server specially for the application, accessible from any platform, including the Web itself - there's a version of Pocket Casts that runs in a web browser!

Which is all clever and comprehensive - and very useful to anyone (like me) with both Windows Phone and Android smartphones. As shown below, it's somewhat magical to see the main podcast listings kept in perfect step and you really can use different devices (or indeed, different Windows Phones, if you want to keep this all within the platform) to listen and never have to hear something twice by mistake or to ever have to think 'Now, did I already listen to that one on another device?' Your subscriptions are perfectly matched and playback positions synced within a few minutes. 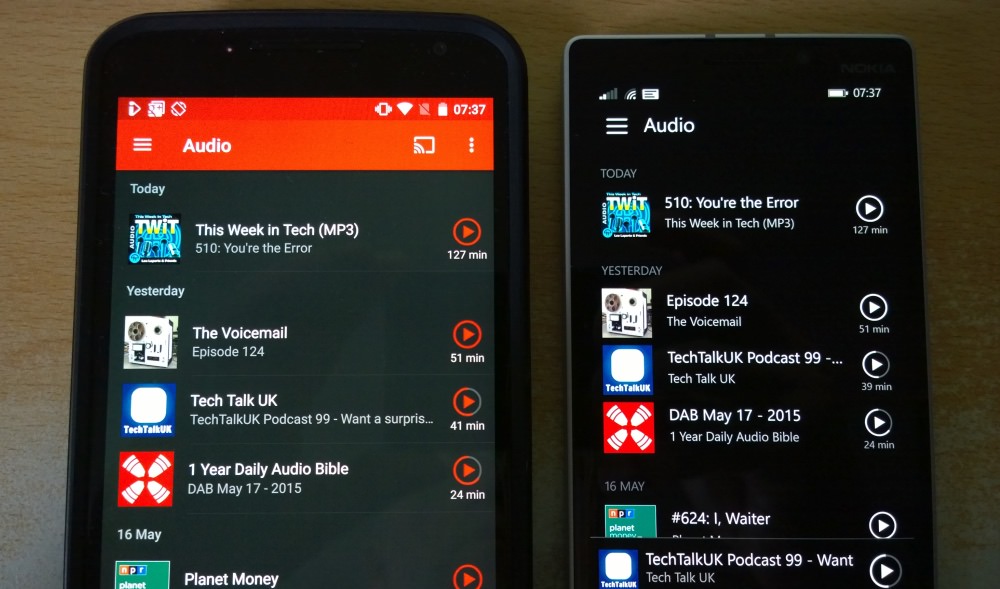 On the Nexus 6 on Android and on Windows Phone here, almost perfectly synced at every stage, across all platforms and all devices!

The sync capability is the jewel in Pocket Casts' crown, but there are other attractive features for hardened podcast addicts on Windows Phone - the UI has, at its heart, (reverse) chronological lists, so that you can see at a glance what's new - no having to keep dipping into and out of other views or refreshing panes to try and spot new content. Pocket Casts' UI has been honed by years on Android and it shows. It's true that most other podcatchers on Windows Phone have adopted some kind of time-sorted view, but few get close to the simplicity on offer here.

Not that Pocket Casts is perfect - or at least not yet. Throughout the user interface, gestures are inconsistent. For example, on the 'Now Playing' pane, you can swipe across to 'Up Next' and then again to 'Show Notes' and then... you're stuck, you can't swipe back and have to resort to the 'Back' Windows Phone control. Or how about that you can swipe in the main 'hamburger' menu from the left edge of the UI but can't swipe it back again - you have to tap on the 'hamburger' icon or again use 'Back' instead. I'd expect these interface oddities to be picked up in the first major update to this Windows Phone client, expected soon.

There's also the much publicised lack of support for video podcasts (cough, The Phones Show) and no way to import existing subscriptions from standard OPML files or even from gPodder or similar - instead you have to sync across from another platform or build your subscription set from scratch. 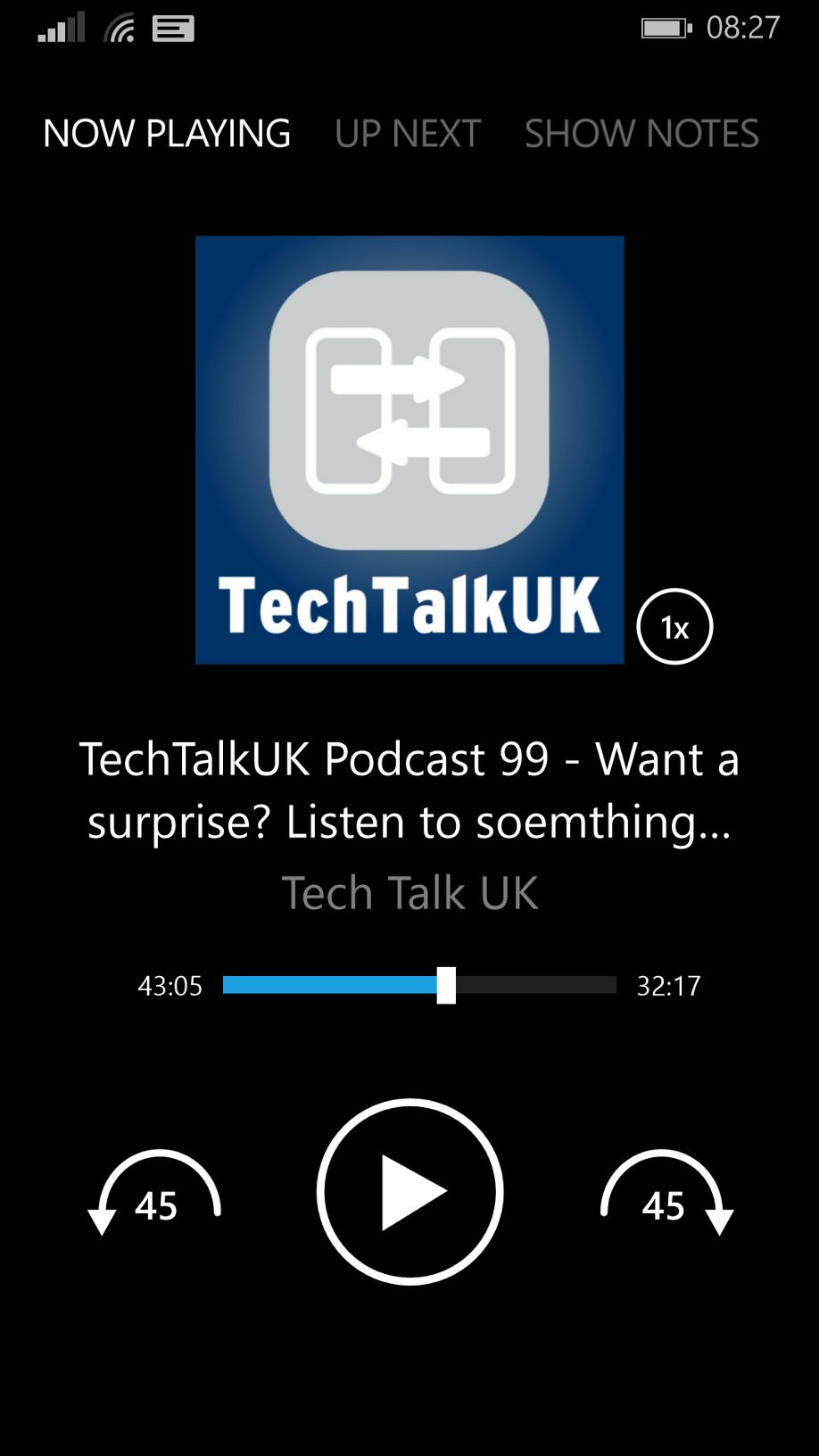 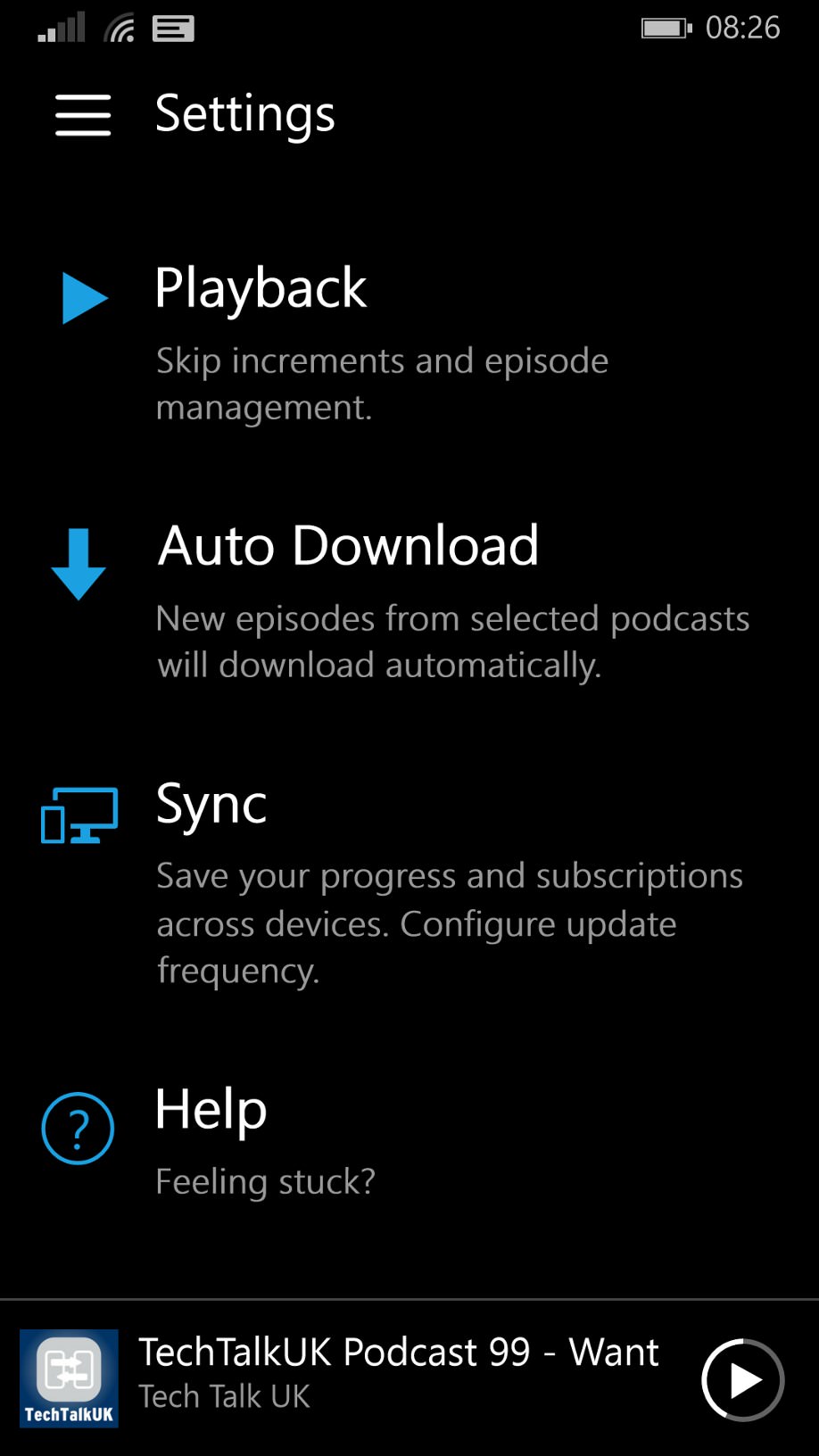 But let's not be negative here, Pocket Casts is still an efficient and effective podcatching engine, even with the caveats above. It's true that this is commercial software (around £3, depending on which country you're in) and with no trial version, which contrasts with the other podcatchers on Windows Phone, almost all of which are either free or have trials. But such a cost is small compared to the hundreds of hours of listening you'll use it for during a calendar year and I'd argue that you should pick the interface and feature set that suits you best and shouldn't worry about the exact purchase price. Besides which, developers are worth their hard work - plus the cost of maintaining a server in this case!

Don't get hung up on the presence of a 'hamburger' menu for navigation within Pocket Casts - you won't need it much. 99% of users will live in the 'Audio' filter/list of content, time-sorted, as I mentioned earlier. There are also predefined 'filters' of content for 'Video' (presumably of more use when the application supports video content fully), 'Downloading', if you're curious as to what's currently coming down the wires, 'Unplayed', and so on. This last seems like a good idea, but if you've only played a single second of a podcast then it won't show up here, so I much prefer to use the 'Audio' view, where everything is listed, complete with a tiny progress meter for each to show how far you've got. These filters can be tweaked, if you like, with a comprehensive form to control what's shown and to perhaps set up a new filter of your own. 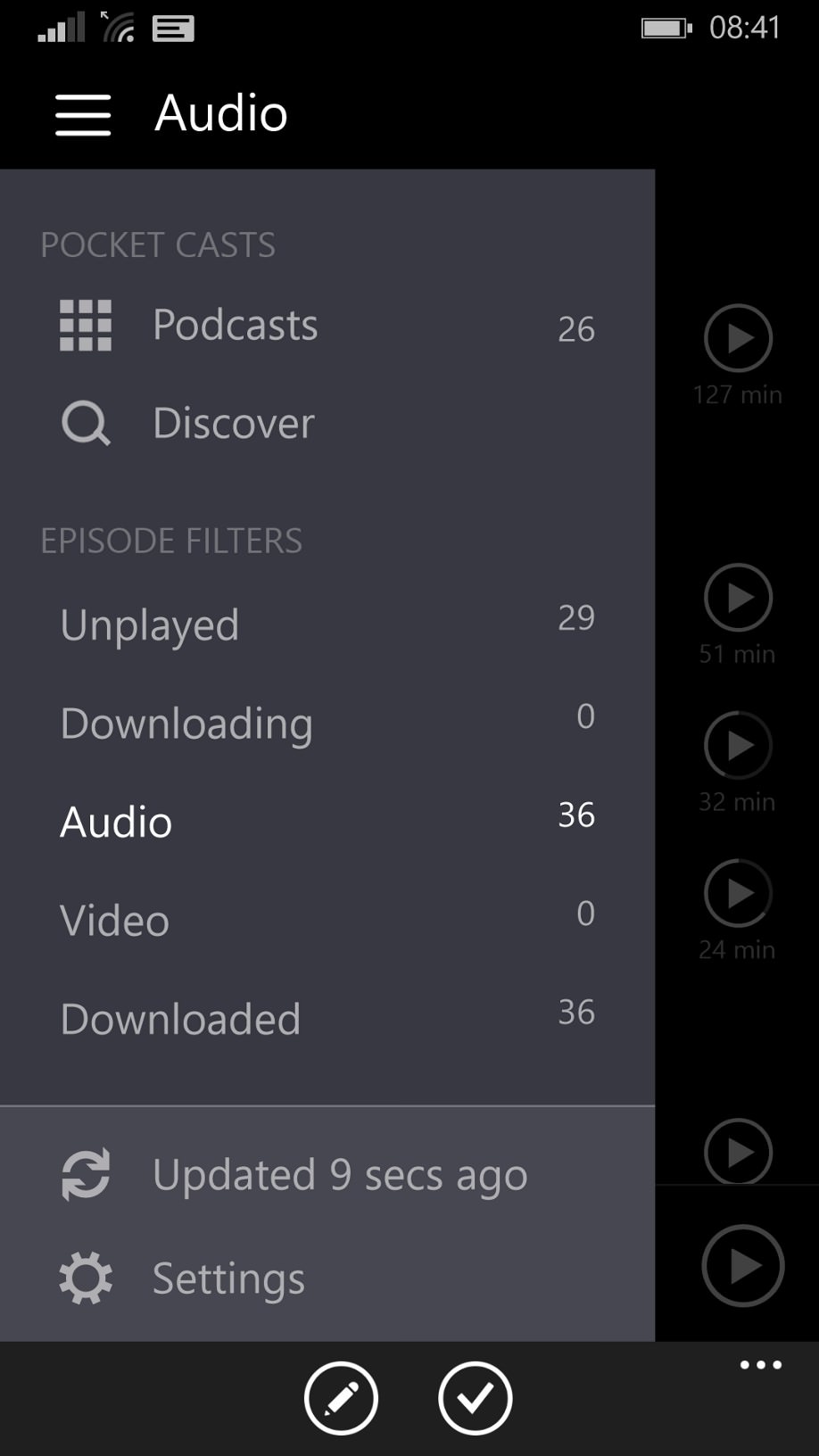 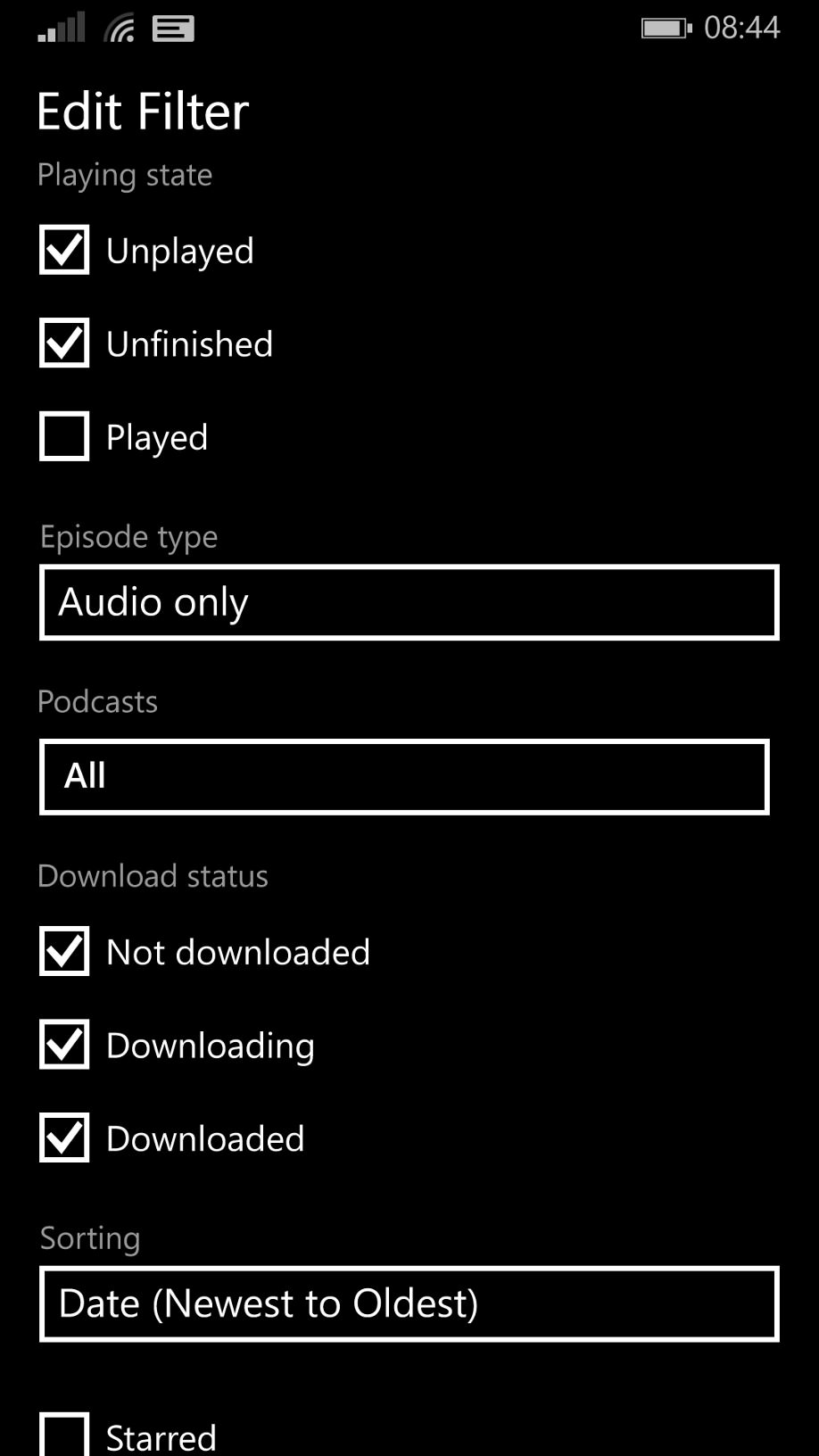 If there's a podcast currently playing (or paused) then this is popped up as a bar at the bottom of the UI and tapping this restores the full playback pane, complete with large, finger-friendly (and configurable!) nudge-back and nudge-forwards controls (for listening to a section again and skipping ads respectively!). There's a seek bar which could be larger - only about 60% of screen width is used for this and it can be fiddly finding a particular time code in a podcast.

Almost uniquely (the built-in Podcasts app does the same), there's full playback speed control. I've never been a fan of changing this, but I also know others who swear by speeding up podcasts in order to fit more into their listening hours, and at least this feature is fully implemented and working well, either for just this show or for all podcasts, as required. 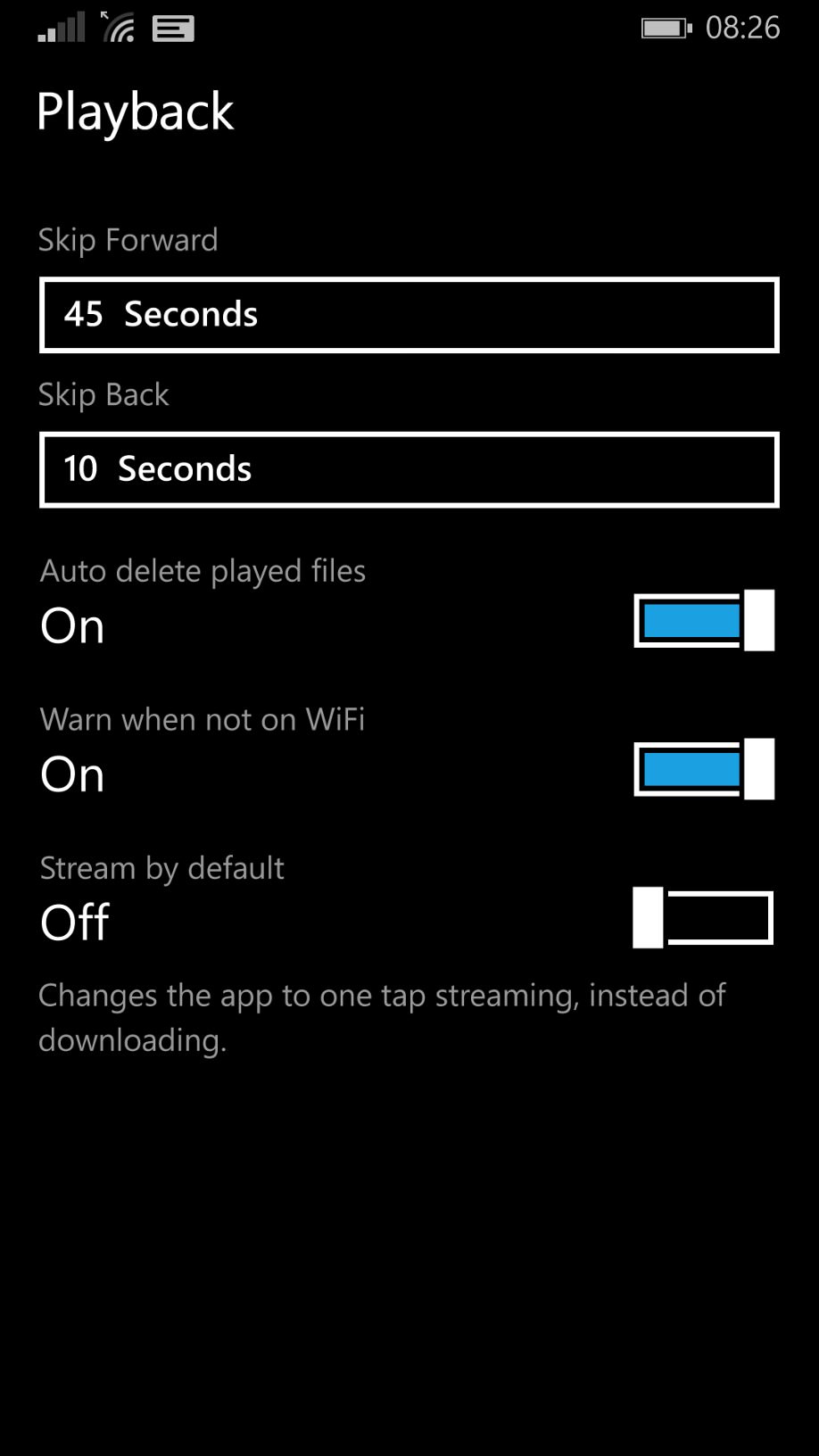 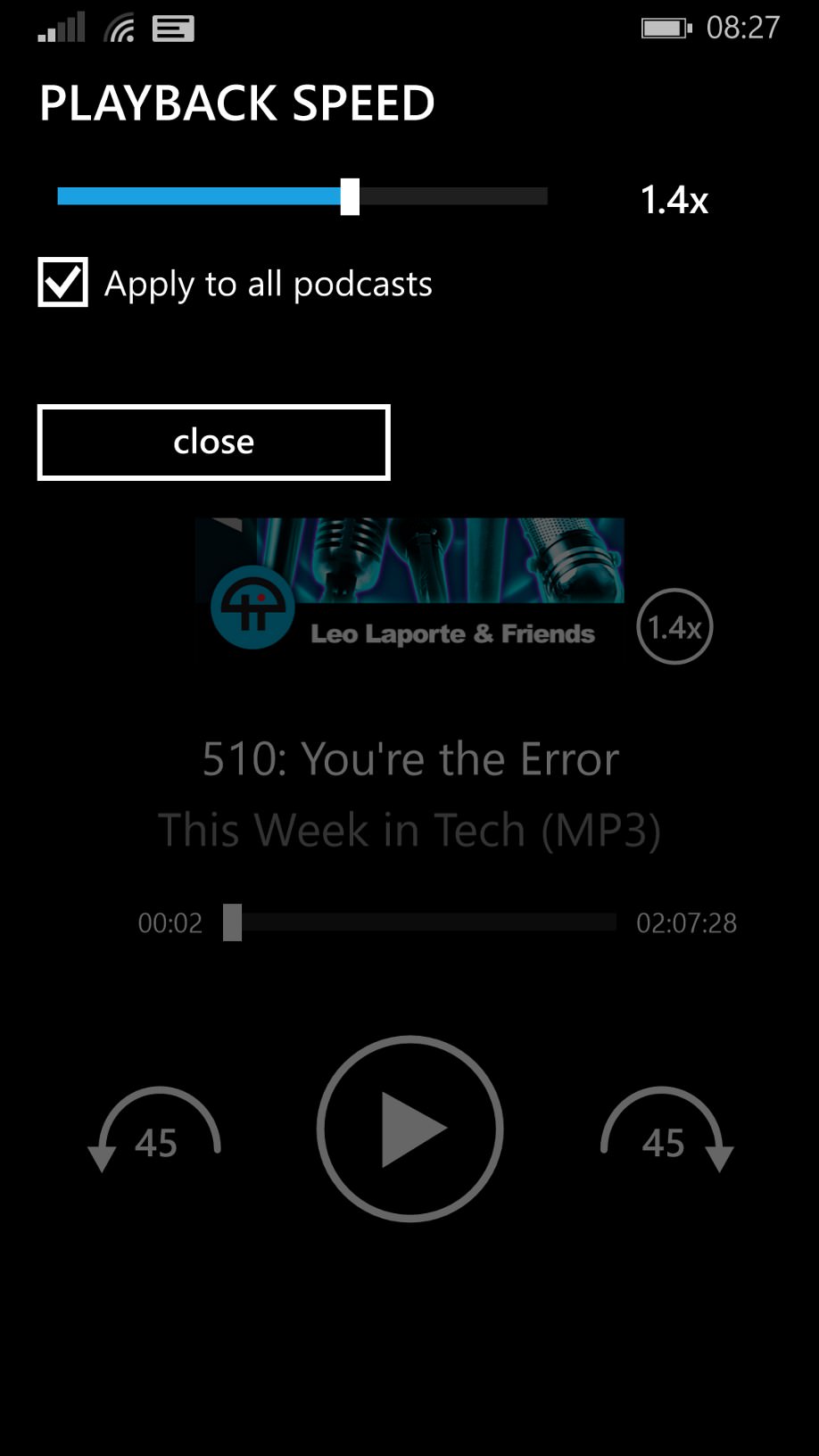 The other basics of a top flight podcatcher under Windows Phone are here, of course, in terms of a search engine that will turn up just about any podcast in existence, just with a portion of its name, auto-cleanup of its own content so that the phone storage doesn't fill up, a very welcome (catch-up) 'mark all played' function, plus a background agent that auto-syncs and auto-grabs new content.

Of course, Windows Phone's own restrictions come into play here a little, with the agent only able to run every 20 minutes or so and even then only when the battery if above a certain percentage. But that's true of every other podcatcher on this platform, and shouldn't be an issue for anyone - after all, most syncing and downloading will naturally happen either during the night, while on charge or perhaps first thing in the morning when you bring up Pocket Casts ready for the morning commute. I've been using the application for the last wek and it hasn't missed a trick yet.

Having also used the other Windows Phone podcatchers at length, I can state that Pocket Casts is already in the top flight. There are half a dozen apps which all now work 'perfectly' and their various UIs will suit different user preferences - Podcast Lounge is still probably the biggest and most fully featured, but it's also arguably the most complex to get to grips with. Pocket Casts brings an intuitive and battle tested UI, rock solid operation*, cross device and platform syncing and variable speed playback, and for all of this I had no issues with the purchase price whatsoever.

Highly recommended for anyone's shortlist. That there are still a few rough edges here and there (including no live tile support) is to be expected in this first release on Windows Phone and I have every confidence that they'll quickly get smoothed out and filled in.

* After this review was first published, I had a situation where Pocket Casts wouldn't launch at all, and I had to reinstall it. All very odd. Working OK now though...