New in the Store in the last month, ZAPYA is a (still beta) tool that's cross platform and claims cross-platform file and media transfer, all on a peer-to-peer basis over Wi-fi. So, while you'd not want to Bluetooth a video (for example) to an Android-owning friend and messing around with platform sharing support is too painful, and uploading to Dropbox might take forever, why not use the fact that both of you are on the same Wi-fi network and simply transfer peer-to-peer? Enter ZAPYA. It's not a totally new idea, but does seem popular and... it's now on Windows Phone too.

The 'beta' nature should be borne heavily in mind, since ZAPYA on Windows Phone is very much in its first version, but I'm reviewing it anyway, because it's an important addition to the platform and ecosystem. When an iPhone or Android-using friend or colleague wants to zap you (ZAPYA) a bit of media and asks "Have you got ZAPYA?" then the answer is now "Yes!" It's not that smooth to use, but it patently does work - because I've been trying it, sending files backwards and forwards between my Lumia 1020 and a Google Nexus. 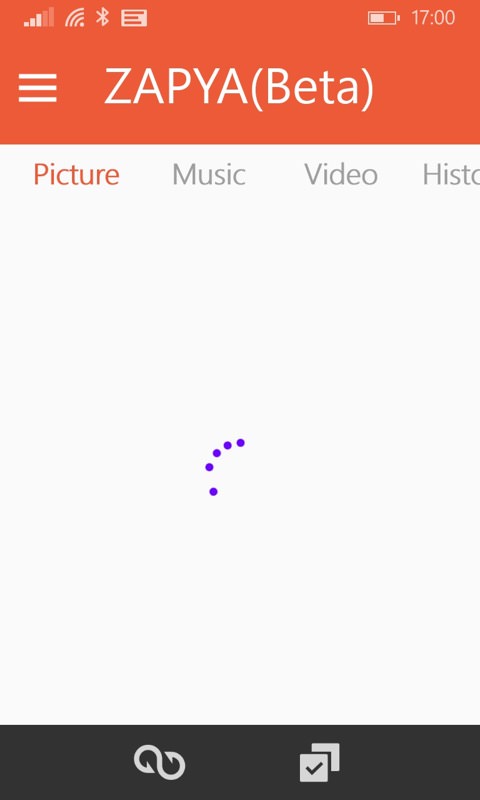 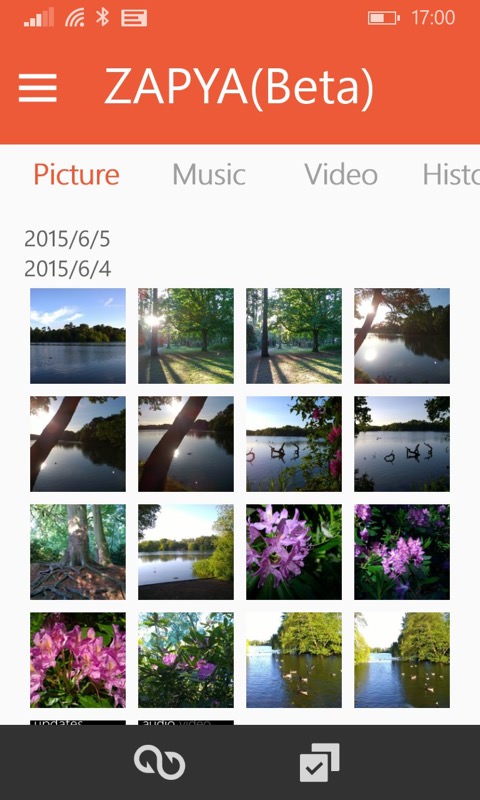 The first point that I have to raise is speed - the ZAPYA app interface appears snappily enough, but the time taken to index a phone's worth of photos is currently excessive. It wouldn't be an issue if this was just the first time the app was launched, but nothing's cached and, if you want to wait until the pane is populated (above right) then you've got around 45 seconds of hanging around watching dots spin.... Similarly for music. Surely this can be tightened up and optimised, with a cache, as ZAPYA moves out of beta?

Happily you can go right ahead and use ZAPYA (e.g. if you need to receive something) without waiting for the main content panes to populate. The 'infinity' icon in the toolbar kicks off a search for other ZAPYA clients on the same Wi-fi network: 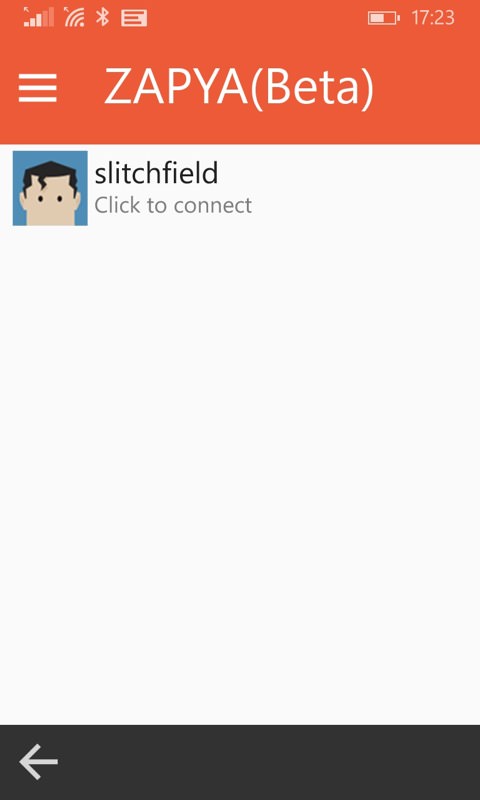 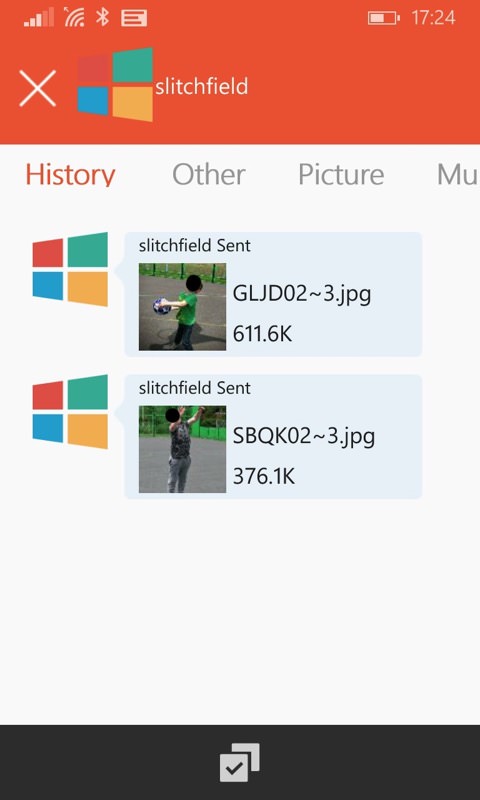 Any clients found are listed and connecting is one tap and lightning fast. Sending items (typically media, but 'other' files are also possible, depending on the devices concerned and their clients and file systems) from the other device is then also a single tap and the item(s) just appear, as if by magic. Although you can't (yet) open media within the ZAPYA client, the files themselves are saved in a sensible destination - for photos and videos, this means a 'Zapya' album in Photos, for example. 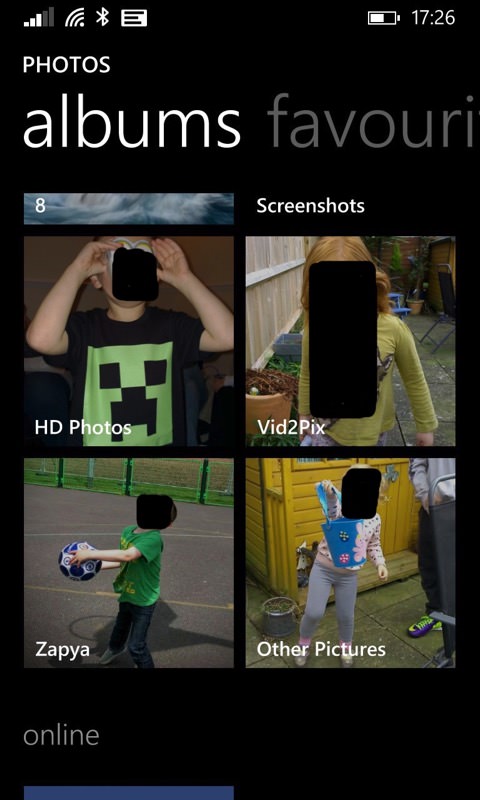 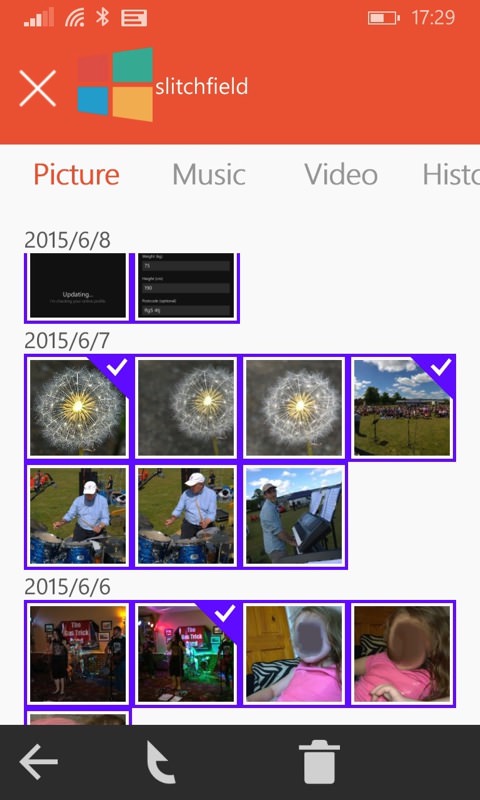 Sending media back from the Windows Phone client to the recipient is also easy. Just tap to select the items tou want to send in the appropriate pane (e.g. 'Picture', above right) and then tap the stylised send icon in the toolbar. Any currently connected ZAPYA clients are shown in the top bar - note that, in principle, you can have multiple clients connected, for example when sending media around a group of friends of colleagues. (DRM? What's that?!)

Receiving and sending files is FAST. The ZAPYA protocol operates at the speed of the Wi-Fi chipsets and antennae on the smartphones and typically you'd be able to achieve several MB per second. Which is damn impressive, compared to the time taken to send the same items by Bluetooth. Or email. Or Dropbox. Or OneDrive. And so on. At these sorts of speeds, it's not just music and photos but videos that can be sent, within reason. 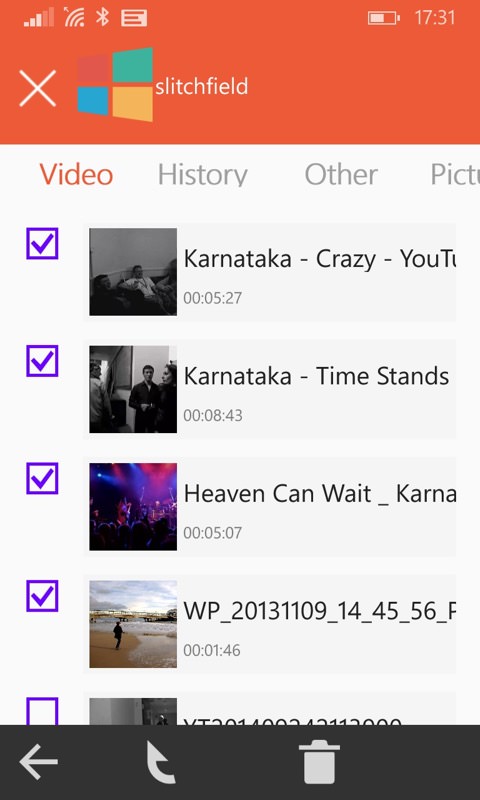 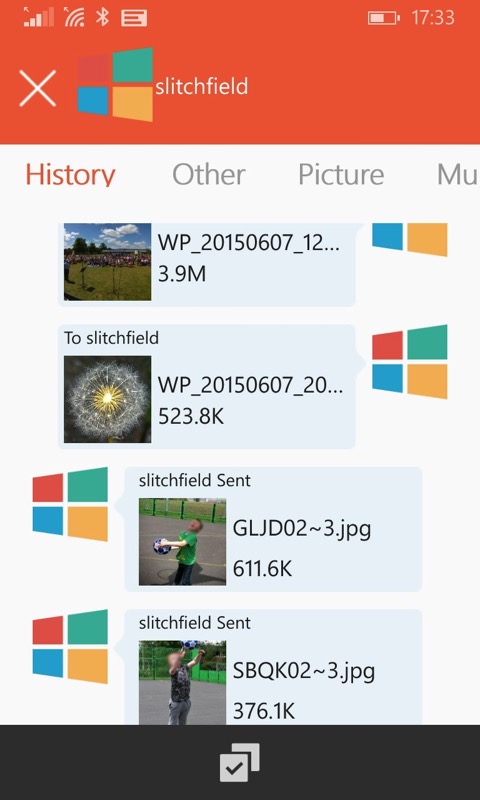 I say 'within reason' because the ZAPYA client for Windows Phone doesn't (yet?) work when the screen's off. So if a file is very large (e.g. a video) then there's a good chance the display will time-out and then the transfer will pause until the screen is re-activated. This is a slight inconvenience and can hopefully be worked around, even by as simple a device as disabling the display time-out while file transfers are in progress.

While clearly a first version and a review that I'll have to come back to in a month or two, ZAPYA is here on Windows Phone and does work. It's not a stability nightmare, but does require a little care and patience here and there. Give it a try - it's free and in this case the sheer usefulness outweighs any sniffiness about the state of the application.

PS. One other small word of caution. And I have no evidence to support this, other than a few Google searches and the fact that in-app updates on Android require installation from outside the Play Store, but watch out where you get other ZAPYA clients from. You should be 100% safe on Windows Phone, of course...!